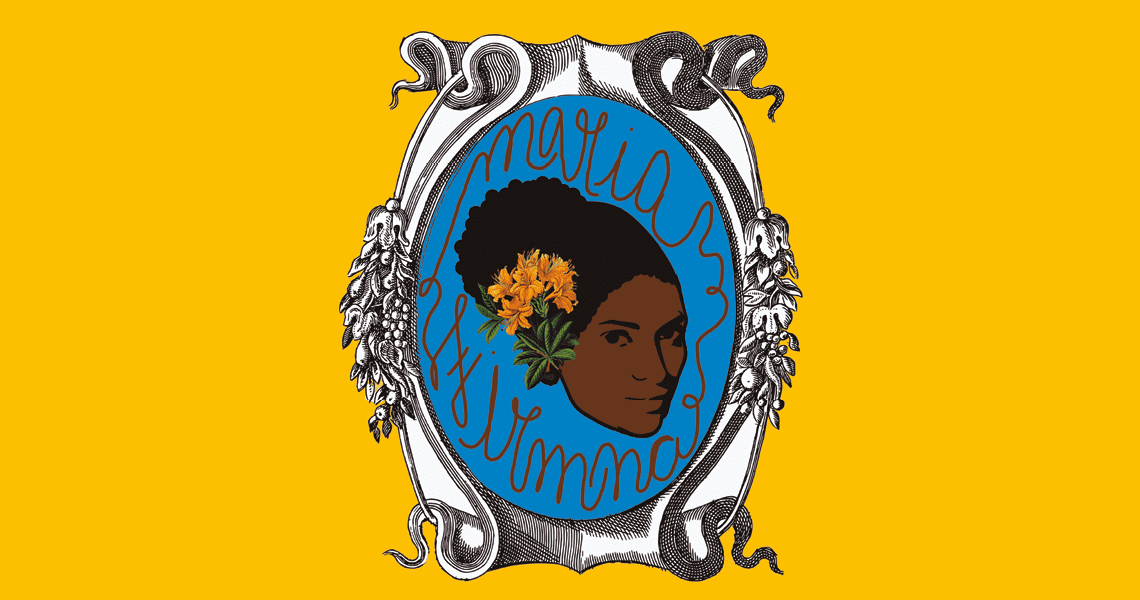 Thanks to academic research begun two decades ago, which has been gaining strength over the last five years, literary historiography began to recognize Maria Firmina dos Reis (1822–1917) as the founder of Black literature and antislavery novel writing in Brazil. Although the early 2000s saw few studies focused on the author’s work, nowadays it is considered fundamental in the critical analysis of the writings of Black intellectuals. However, some gaps remain, such as the writer’s paternal origins, and the whereabouts of the manuscript of her 1857 novel Úrsula, considered one of the first books published by a woman in the country.

Reis worked with several newspapers in the state of Maranhão for more than half a century, publishing poetry, chronicles, and short stories, including Gupeva (1861), and A Escrava [The Slave] (1887). “She was the woman with the most visibility in the Maranhão press throughout the 19th century,” shares Algemira de Macedo Mendes, a professor at the Department of Languages and Literature of the State University of Piauí (UESPI). Even so, her literary career ended up largely forgotten—until the 1970s, over 50 years after her death. At the time, Paraíba historian and bibliographer Horácio de Almeida (1896–1983) found a copy of Úrsula in a Rio used bookstore and showed it to his friend, poet and journalist José Nascimento Morais Filho (1922–2009). At the same time, during research conducted in public archives, Morais Filho came across the name of the writer in magazine and periodical articles. The two researchers found that the book Úrsula, written under the pseudonym “a Maranhão woman,” was penned by Reis.

Eager to know more, Morais Filho decided to conduct a comprehensive survey. “After this discovery, he published advertisements in newspapers, asking readers to send him information about her works,” shares Mendes, who defended a PhD thesis on Reis at the Pontifical Catholic University of Rio Grande do Sul (PUC-RS), in 2006. In 1975, Morais Filho released the biography Maria Firmina: Fragmentos de Uma Vida (Maria Firmina: Fragments of a Life), published by COCSN. In that same decade, Almeida put together a new edition of Úrsula at the request of the Maranhão government. Thus, Morais Filho and Almeida began the process of recovering the life and work of Reis, which is still in progress.

According to Mendes, until the early 2000s, the few studies on Reis involved only Maranhão institutions. Thanks to interest from São Paulo and Rio de Janeiro researchers, her writings began to draw attention in universities across the country. One of the events that contributed to the dissemination of her work was the 2003 enactment of Federal Law No. 10,639, which made it mandatory for Afro-Brazilian and African history and culture to be taught in schools across the country, starting in elementary school. “The law significantly increased the circulation of works by Afro-Brazilian writers among all audiences,” she explains, pointing out that this process was also favored by the growing interest of researchers in investigating narratives by historically oppressed populations, in addition to the rise of gender studies.

Danglei de Castro Pereira, professor of Brazilian literature at the University of Brasilia (UnB), agrees with Mendes that the law helped arouse interest in Black authors and, consequently, helped bring awareness to Reis’s work and new readings of famous authors, such as Machado de Assis (1839–1908) and Lima Barreto (1881–1922). From 2017 to 2018, Úrsula was reprinted 13 times, meaning it has a total of 23 editions. In addition, institutions such as the Federal University of Rio Grande do Sul (UFRGS) and PUC-RS included the novel in their list of mandatory reading for their entrance exams. Prior to the recent discoveries that demonstrate her significance, the most widely circulated textbooks in university courses, such as História Concisa da Literatura Brasileira [A Concise History of Brazilian Literature] (1970), by Alfredo Bosi, and Formação da Literatura Brasileira [The Formation of Brazilian Literature] (1959), by critic Antonio Candido (1918–2017), do not honor the author’s significance.

In the wake of this process, Calila das Mercês, who is charting contemporary female Black authors for her PhD in literature at the University of Brasília (UnB), points out that, in 2017, the Secretary of Culture of the Federal District established the Maria Firmina dos Reis Seal, with the goal of appreciating the literary works of Afro-Brazilian authors and making Black-authored novels more accessible through public libraries. “The new-found appreciation for Reis is part of an effort to understand the history of Black people in Brazil, in congruence with the work of intellectuals, such as author Conceição Evaristo, who bridge the gap between academia and the Black movement,” analyzes Mercês. In 2018, Edições Câmara, the publishing house of the House of Representatives, published the complete works of Reis.

Illustrations by Silvana MendesA Pioneering Novel
Úrsula takes place in the mid-19th century and tells the story of Tancredo and Úrsula, who, while in love, face adversity to be together. The protagonists are both white. The role of the Black characters involves criticism of slavery and the patriarchal structure of society. “The only known novel by Reis, the book came to be considered the first in Brazilian literary history to be openly against slavery, and which preceded by more than 10 years works that, until a few years ago, were considered pioneering in that regard—such as O Navio Negreiro [The Slave Ship, 1870], by Bahia poet Castro Alves [1847–1871], and A Escrava Isaura [Isaura, The Slave Girl, 1875], by Minas Gerais author Bernardo Guimarães [1825–1884],” notes Mendes, from UESPI.

Pereira, from UnB, explains that the novel follows the stylistic approach of Brazilian Romanticism, as defined by its nationalism, sentimentality, and subjectivity. “Reis was one of the first authors to give a voice to peripheral characters; her work is also firmly anchored in Romanticism, due to its bourgeois perspective of the world. In this sense, Úrsula reproduces the social conventions of its time, but also addresses elements related to the outcast status of Black people, who are portrayed as people and not objects in the narrative,” according to the researcher.

In her PhD thesis “Corpo de Romances de Autoras Negras Brasileiras (1859–2006): Posse da História e Colonialidade Nacional Confrontada” (The Collection of Novels by Brazilian Black Female Authors [1859–2006]): Owning History and Confronting National Colonialism], winner of the 2020 Capes Award for Best Thesis in Linguistics and Literature, Fernanda Rodrigues de Miranda reads Reis as a foundational author. “In other words, from her we can identify the formation of a repertoire of novels by Brazilian Black female authors,” explains Miranda, who defended her thesis at USP. In her opinion, Reis was politically ahead of her time, as illustrated by the lines of Suzana, one of the Black characters in Úrsula. In one excerpt, upon hearing from Túlio—another Black character, who had been freed—Suzana questions him about those who remained enslaved. “The author reflects on the need to think about the post-Abolition period, drawing attention to the fact that it is not enough to extinguish slavery; it is also necessary to change the hierarchy of society—a discussion that remains relevant today,” notes Miranda. “The Black characters are involved in the conflict of the white characters, but they are what makes the novel strong,” she defends, stating that Reis’s writing helps us piece together the reality of Brazil. In her thesis, when describing a collection of literary works by Black female authors since the nineteenth century, Miranda sought to bring awareness to these works, many of which have been erased throughout history.

Reis was born in São Luís do Maranhão, in 1822. At the age of 8, without a mother, she moved in with an aunt in the city of Guimarães, where she spent the remainder of her life. The family was financially stable and made sure the author was able to get an education—unusual for Black women at the time. “There is no evidence that she ever attended school. She was likely homeschooled,” speculates historian Régia Agostinho da Silva, from the Federal University of Maranhão (UFMA). In 1847, Reis passed a government exam to become a primary school teacher, a position she held until her retirement, in 1881. Her biography by Nascimento de Morais Filho reports that, when Reis obtained this position, her family wanted her to be carried on a palanquin by slaves to sign the documents, which she apparently refused. “This information was based on oral reports and may not have, in fact, taken place. Regardless, it remains in our collective imagination,” says Silva.

One year before retiring, Reis founded the first co-ed school in Maranhão, for low-income girls and boys. She died at 95, survived by 11 adopted children. Until 2018, according to the biography written by Morais Filho, it was believed that Reis had been born on October 11, 1825, the daughter of a Portuguese mother. In that year, research conducted in the archives of notaries and churches in São Luís revealed that the writer was born on March 11, 1822, and her mother was a freed slave.

Despite the discoveries of recent years, there is still much to learn. It is still unknown, for example, the identity of Reis’s father, how she was schooled, and whether her mother had already been freed when she was born. Her physical appearance is another mystery: There are no known photos or oil portraits of the author. Until 2012, on a wall of the Guimarães City Council, Reis was pictured as a white woman.

In addition to the manuscripts of Úrsula, the researchers do not rule out the possibility of discovering other works by Reis, considering her long career as a published author. Besides Úrsula and the short stories, a collection of poems has also been found: Cantos à Beira-Mar (Songs by the Sea) (1871). “In her novel, Reis constructed a pioneering memory of the African Diaspora, and what we know about her is just the tip of the iceberg. Much has yet to be found,” predicts Silva, from UFMA. In 2012, she defended her PhD thesis on Reis at USP. “Her short stories deserve more attention from academia. I also believe a new biography should be written, including the updated work of Morais Filho, as well as more recent discoveries.”