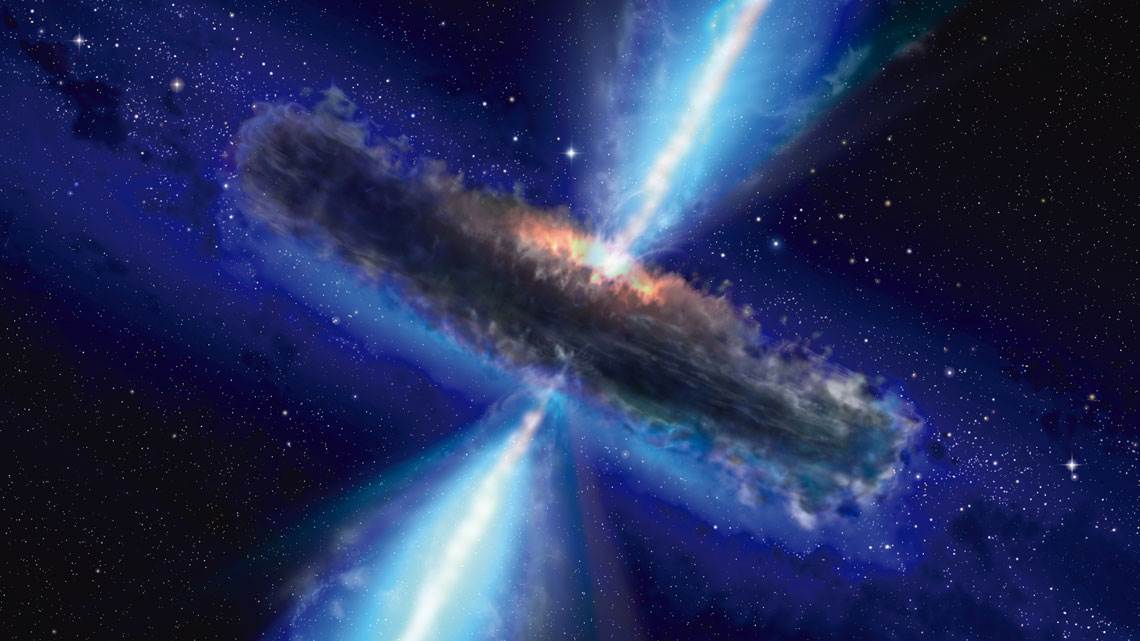 Computer models designed and run by astrophysicists from Brazil and abroad reproduced the generation of ultra-high-energy cosmic rays by a mechanism of magnetic acceleration associated with the activity of blazars—galaxies with an active nucleus that emit an intense jet of plasma (ionized gas) towards Earth. At the center of every blazar is a black hole whose mass is millions or even billions of times greater than the Sun. After consuming the matter it attracts, the black hole blasts a stream of electrically charged subatomic particles perpendicular to its axis of rotation—known as a plasma jet. This stream of ionized matter can travel through space at about 300,000 kilometers per second, close to the speed of light.

Cosmic rays that are accelerated in these environments are the most energetic particles in the Universe. Many particle physicists are interested in determining what types of celestial bodies and processes produce them. “In our simulations, we were able to accelerate low-energy protons inside a turbulent jet using a mechanism known as magnetic reconnection, producing cosmic rays with energies in the order of 1018 to 1020 electronvolts [eV],” says Elisabete de Gouveia Dal Pino of the Institute of Astronomy, Geophysics, and Atmospheric Sciences at the University of São Paulo (IAG-USP), coordinator of the group that created the computer model as part of a project funded by FAPESP. “These results support the hypothesis that blazars may be one of the sources of the most extreme cosmic rays.” Data from the studies were presented in two articles published in the Astrophysical Journal in 2021 and are set to be described in new papers later this year.

The expression “cosmic rays” refers to electrically charged particles (protons, electrons, and nuclei of atoms) and neutral particles (neutrinos, neutrons, and photons) that are produced in extreme celestial objects and travel through the Universe before eventually reaching Earth. Less energetic examples, such as solar wind, are more abundant and probably arise through phenomena that occur within the Milky Way. Those with more energy are seen less frequently and tend to come from farther away. Particles of the highest energy are generated outside the Milky Way, as has already been verified by the Pierre Auger Observatory in Argentina, funded by several international agencies, including FAPESP and the CNPq (see Pesquisa FAPESP issue nº 260).

In 2005, Dal Pino and American astrophysicist Alexandre Lazarian of the University of Wisconsin, USA, proposed the mechanism of magnetic reconnection as one of the possible ways ultra-high-energy cosmic rays are produced. Magnetic reconnection is characterized by the rapid breaking and reconnection (hence the term) of the magnetic field lines of an ionized gas, as occurs in jets of particles produced by the black holes at the centers of galaxies, including blazars. The process converts magnetic energy into thermal energy (heat) and kinetic energy (accelerating the plasma particles), often resulting in explosions. Phenomena like solar flares (sudden eruptions on the surface of the Sun) and auroras in Earth’s polar regions occur due to rapid reconnection of magnetic field lines. In the case of cosmic rays, it was previously unknown whether the mechanism is strong enough to explain the generation of the most energetic particles in the Universe.

Studies by Dal Pino’s group suggest that at least in plasma jets produced by blazars, magnetic reconnection appears to be capable of producing extremely energetic cosmic rays. Dal Pino’s team used numerical computer models to generate a system that emulates the behavior of these plasma jets, and then introduced instabilities that led to rapid and turbulent magnetic reconnection. In the simulations, some of which lasted hundreds of hours, the researchers wanted to see whether any particles were able to gain enough speed to be considered ultra-high-energy cosmic rays. According to the group’s work, the answer is yes. “In the simulations, we injected hundreds to thousands of low-energy protons that are accelerated by magnetic reconnection in the turbulent fluid of the jet,” explains Tania Elizabeth Medina Torrejón, a Peruvian physicist currently on a postdoctoral fellowship at the IAG and one of the authors of the articles. “Over time, we saw an exponential growth in the energy of these particles.”

In 2018, the IceCube Neutrino Observatory, located near the South Pole in Antarctica, recorded the first documented source of high-energy neutrinos associated with blazars, a type of particle that can only be produced by protons with extremely high energy. The superaccelerated particles came from a blazar named TXS 0506+056, about 5.7 billion light-years from Earth, where a black hole emits a jet of plasma toward Earth (see Pesquisa FAPESP issue nº 270). “This blazar also generates strong gamma-ray and neutrino emissions. We recently reconstructed these emissions using the magnetic reconnection acceleration model,” says Mexican astrophysicist Juan Carlos Rodríguez-Ramirez, another postdoctoral fellow in the IAG group. The production of gamma rays is set to be studied in detail by the Cherenkov Telescope Array (CTA), designed to be the largest ground-based astronomical instrument for observing of this type of radiation. The CTA is a €350-million project, led by Europeans with the participation of astrophysicists from Brazil (see Pesquisa FAPESP issue nº 312).