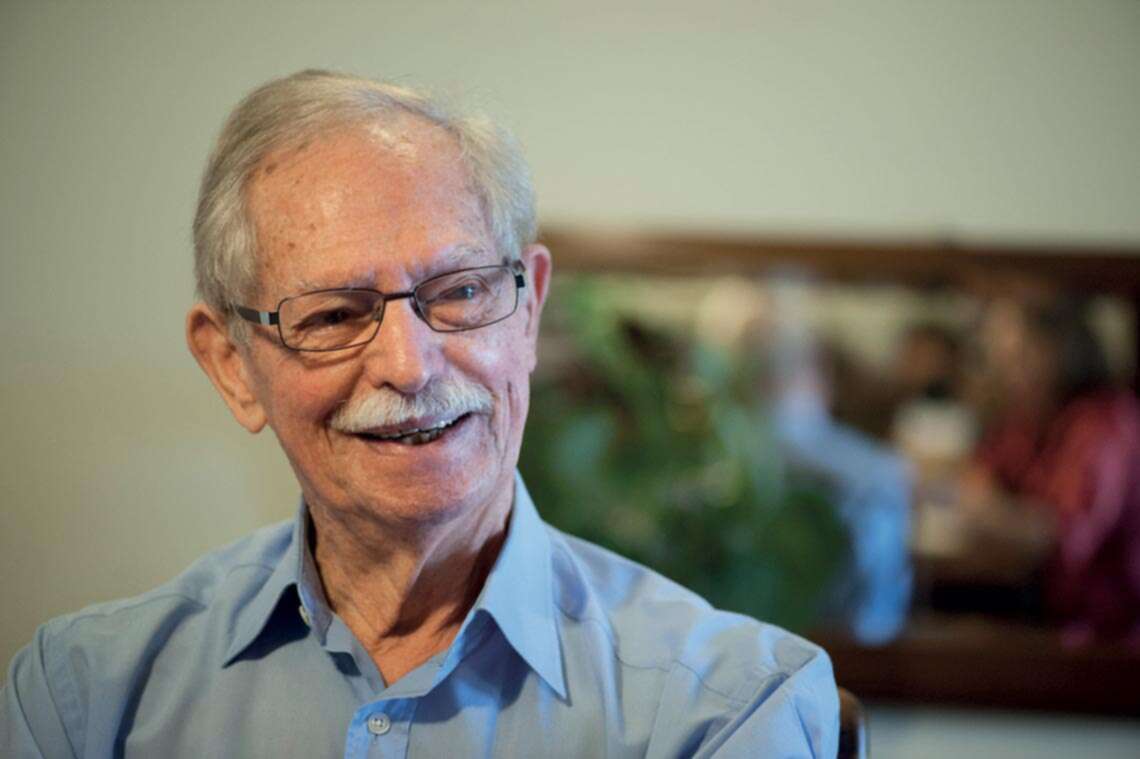 Salmeron during a visit to São Paulo: the physicist often collaborated with Brazilian institutions

It was during a 1969 visit to the Montmartre district, in Paris, that Amazonian composer Cláudio Santoro (1919–1989) decided to name one of his best-known pieces for orchestra Interações Assintóticas [Asymptotic Interactions]. He was inspired by the friend accompanying him, physicist Roberto Salmeron, then a professor at the École Polytechnique, in France. The piece was finished, but it still lacked a title. While describing what the new song sounded like, Santoro said that the sound would rise, then drop to near silence, and then resume its gradual climb, like a roller coaster. “In mathematics we call that an asymptotic curve,” Salmeron told him. The memory was shared in the 2015 documentary Santoro – O Homem e Sua Música [Santoro – The Man and His Music] by psychoanalyst Sonia Salmeron, wife of Roberto Salmeron, who passed away on June 17, the day after his 98th birthday, due to complications from gallbladder surgery. In addition to Sonia, Salmeron is survived by three children and grandchildren.

The son of blue-collar workers of Spanish origin, Roberto Salmeron helped pave the way for elementary particle physics in Brazil in the 1950s—a field that seeks to explain the composition of matter and how its particles interact with each other. His friendship with Cláudio Santoro illustrates the inclusive spirit that marked Salmeron’s career. According to friends, he was often seen conversing with specialists from other areas, such as philosophy, reflecting on the similarities between the creative processes of science and art.

Salmeron obtained a mechanical-electrical engineering degree from the Polytechnic School of the University of São Paulo (USP) in the late 1940s. He then gravitated toward physics, influenced by the Italian-Ukrainian physicist Gleb Wataghin. “When I was a student at the Polytechnic, I sometimes attended Professor Wataghin’s lectures at the School of Philosophy. One day I went up to talk to him and then I began working with cosmic rays,” said Salmeron when interviewed by Pesquisa FAPESP in 2004 (issue no. 100). After Wataghin returned to Italy in 1949, Salmeron was hired at the then recently-founded Brazilian Center for Physics Research (CBPF), in 1950, at the invitation of César Lattes (1924–2005).

Physicist Carlos Henrique de Brito Cruz, from the University of Campinas (UNICAMP) and FAPESP scientific director from 2005 to 2020, says that Salmeron’s interest in experimental physics was sparked by his contact with Wataghin. “At the beginning of his research career, Brazil was all about theoretical physics. This was because the country did not have the appropriate infrastructure to carry out experiments,” explains Brito Cruz. “Salmeron fell in love with experimental particle physics at a young age, which may have been instrumental in his leaving Brazil for England.”

In 1953, Salmeron was granted a PhD fellowship from the United Nations Educational, Scientific and Cultural Organization (UNESCO) at the University of Manchester, in the United Kingdom. He picked this institution because he knew it housed a significant cosmic ray laboratory, then run by Patrick Blackett (1897–1974), an Englishman who had been awarded the Nobel Prize in Physics in 1948 for his discoveries in the field of nuclear physics and cosmic radiation. 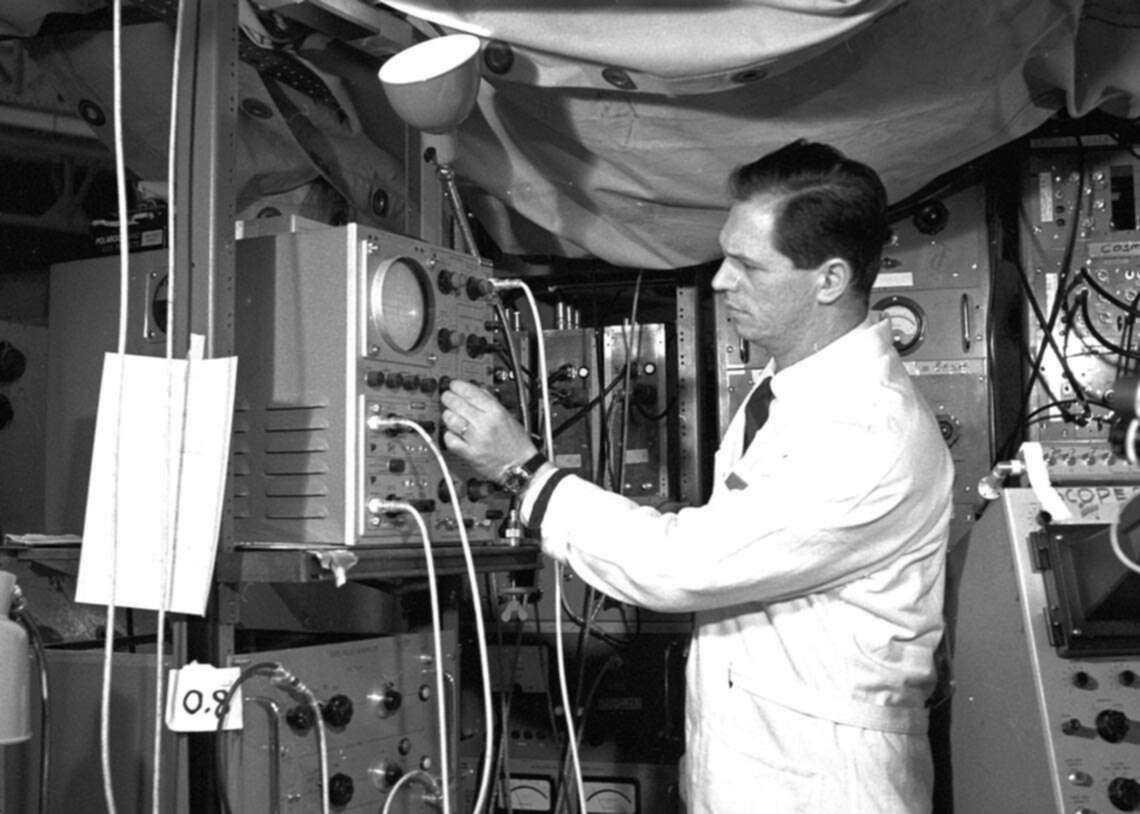 The researcher checking a machine at CERN in 1963, where he carried out experiments involving neutrinosCERN Photolab

After Salmeron finished his PhD, he was recommended by Blackett to work at the European Organization for Nuclear Research (CERN) in Geneva, Switzerland, founded in 1954 and considered one of the most significant scientific laboratories in the world. The Brazilian scientist was one of the first 10 experimental physicists hired by the institution.

“At that time, Europe was in great need of physicists, because many of them had left the continent and migrated to countries like the United States due to World War II,” says physicist Alberto Santoro, professor emeritus at the State University of Rio de Janeiro (UERJ). Like his brother Cláudio, Alberto Santoro grew close with Salmeron. “I remember in detail the informal lectures Salmeron offered at his Paris home, years later, to Brazilian students who had migrated to the French capital in order to attend graduate school,” recalls Santoro, who completed his PhD at the University Paris 7.

In Geneva, the Brazilian physicist was involved in impactful experiments with particle accelerators. “My work with neutrinos was my most important experience there,” he shared in a video produced by Pesquisa FAPESP. Salmeron carried out experiments that helped discover a new variety of the elementary neutrino particle. “I met Salmeron at CERN. He and I used to experiment with neutrinos,” says French physicist and philosopher Michel Paty. “He was very engaged as a scientist, often concerned with political and social issues. He also loved literature and fine arts. In Geneva, he took painting classes and produced beautiful portraits of the city.”

He remained at CERN for eight years before being asked to help establish the University of Brasília (UnB) alongside intellectuals such as educator Anísio Teixeira (1900–1971) and anthropologist Darcy Ribeiro (1922–1997). Salmeron accepted the challenge and began working in Brasília in January 1964. He took Paty with him. At 27, the Frenchman became assistant professor of physics at UnB.

At the new university, Salmeron was tasked with organizing and directing the Institute of Sciences, but his tenure was interrupted in late 1965, due to intervention from the military government at the newly created university. The persecution of teachers and students by the dictatorship (1964–1985) led him to resign and return to CERN, an experience he described in his book A Universidade Interrompida (The university interrupted) (Editora UnB). A year and a half later, in 1967, he was asked to teach at École Polytechnique, where he remained for 25 years.

His short time at UnB was enough to spark an interest in physics in some of his students, such as Santoro. Salmeron also encouraged students to study in Europe after they graduated. “Despite the distance, he maintained close contact with Brazil’s scientific community. By helping us gain access to European institutions that are on the frontier of knowledge, such as CERN, as well as United States institutions, like the Fermi National Accelerator Laboratory [FERMILAB], he was key in the formation of a whole generation of particle physicists,” states the researcher.

Salmeron coadvised many of these Brazilian students who went to France. This was the case for both Santoro and João dos Anjos, current director of the National Observatory, in Rio de Janeiro. After graduating from the Federal University of Rio de Janeiro (UFRJ), João dos Anjos was advised by José Leite Lopes (1918–2006), then director of the UFRJ Institute of Physics, to pursue his master’s degree with Salmeron in France.

“I was interested in working with elementary particle physics and he was a specialist on the subject,” says Dos Anjos. “I was granted a scholarship from the French government and enrolled at the University of Paris 11. In practice, I was advised by Professor Salmeron, whose home was always open for me and other Brazilian students in France.”

Even having lived abroad for decades, Brazil had never left Salmeron’s radar, points out Brito Cruz. “He would let me know whenever he visited São Paulo, so we could have lunch. At one of these meetings, Salmeron told me about the relevance and the challenges of particle physics for the 21st century. This helped us identify the neutrino topic we should work on alongside FERMILAB.”

Salmeron also played an important role as a consultant in the establishment of the Brazilian Synchrotron Light Laboratory (LNLS), in Campinas, during the 1980s and 1990s. This is where Sirius, the new Brazilian synchrotron light source, is operating today (see Pesquisa FAPESP issue no. 287).

Physicist and science historian Olival Freire Junior, from the Federal University of Bahia (UFBA), met Salmeron in 1976, as an undergraduate student, during a presentation held at USP. “I was infected by his teaching ability.” Twenty years later, Freire Junior met Salmeron again by chance in a Paris department store. “I am very shy, but I found the courage to approach him and start a conversation. We ended up becoming friends and I’d always visit him when I traveled to France for work,” shares Freire Junior.