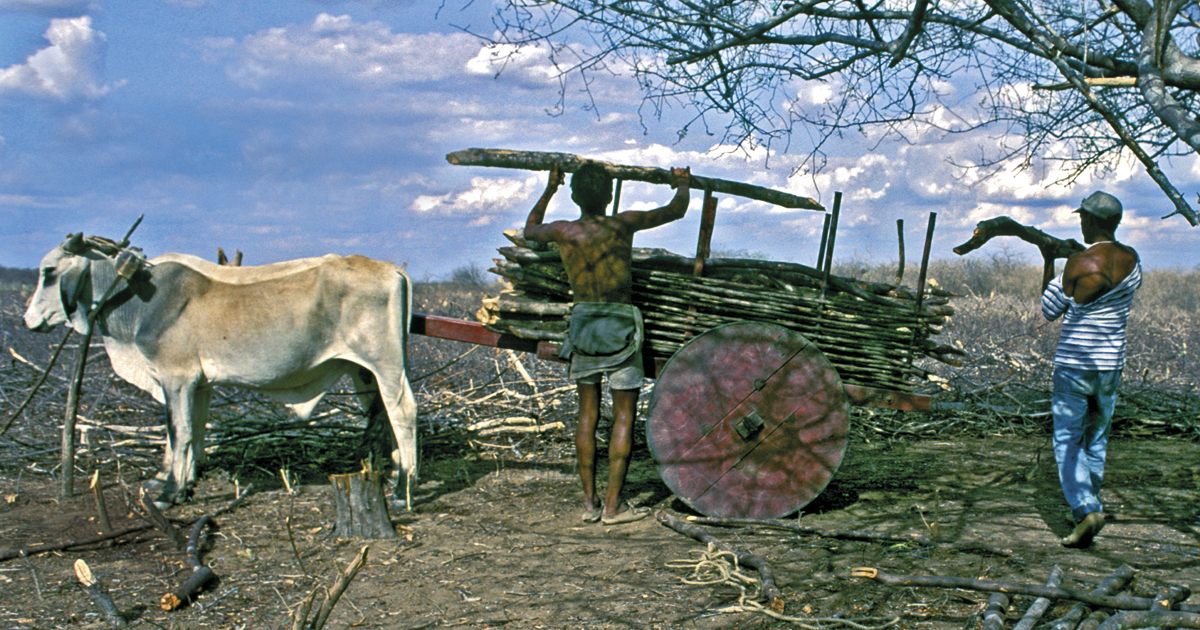 Collecting firewood in the interior of Pernambuco

Over three scorching days during the second week of March 2018, a team from the Federal University of Pernambuco (UFPE) dug pits in the dry soil of abandoned fields in Catimbau National Park in central Pernambuco to examine the inside of leafcutter ant colonies. The researchers saw that in the area of shallow soil where they dug, the ants had stored organic matter up to 3 meters (m) deep, blocking plants from accessing nutrients and delaying the regeneration of native vegetation. On other expeditions, they found that the density of leafcutter ant colonies increased from two per hectare (ha) in the areas of native vegetation to 15 per ha (1 ha is 10,000 square meters) in areas used for farming or grazing. The leafcutters overlap with other species of ants as the native vegetation is removed.

The proliferation of leafcutter ant colonies highlights the depletion of the Caatinga (semi-arid scrublands) caused by the slow and continuous removal of trees and animals from these wild areas. Because the process involves extraction of small amounts of natural resources, it escapes satellite images, but this practice silently transforms the landscape of the badlands in the Brazilian northeast and increases the risk of desertification. Another visible sign of metamorphosis is the proliferation of invasive plants such as Prosopis juliflora, a type of mesquite tree native to the Andes used for timber and livestock feed. Invasive plants grow rapidly in more open environments and become dominant in abandoned pastures or farmland.

Situated in the municipality of Buíque and spanning 622 square kilometers (km2), Catimbau Park is home to approximately 1,500 people who were living there when the park was created in 2002. These residents use the wild areas to plant corn and beans, raise goats, obtain wood to build fences or to cook, and hunt for food. The UFPE researchers concluded that interventions by these small rural producers have caused the loss of at least a third of the park’s biodiversity, especially with regard to plants.

“This is not an isolated case,” says ecologist Marcelo Tabarelli of UFPE, coordinator of the research group. “The trajectory of degradation, with the transformation of the forest into vegetation dominated by shrubs and then herbaceous species, occurs throughout the Caatinga. The greater the human pressure on the native vegetation and the less water there is, the more impoverished the environment will be, along with the people who survive from it.”

Humans have long had an impact on the native vegetation in the interior of northeastern Brazil. In the sixteenth century, the sertão (badlands) region produced meat and food for the inhabitants of the coast, where production of sugarcane was emphasized. After five centuries of economic exploitation, nearly half (45%) of what was originally Caatinga (826,000 km2, the equivalent of 11% of Brazil’s area) has been deforested, mainly by large rural producers.

In the introduction to the 2017 book Caatinga: The Largest Tropical Dry Forest Region in South America, Tabarelli and the biologists Inara Leal and José Maria Cardoso (from UFPE and the University of Miami, respectively) observed that residents of rural communities in the Caatinga depend on the native vegetation to survive, which causes slow and continuous changes to the environment. They state that between local inhabitants, large infrastructure projects, and commercial agriculture, at least 63% of the Caatinga has been impacted by human activities.

Of the 89 families living in Catimbau Park, 85% depend on extraction of wood to cook, according to a 2012 survey by UFPE biologist Laís Rodrigues. The average yearly consumption of firewood was 606 kilograms (kg) per year, the equivalent of 10 ha per year, just to fuel wood stoves. “Within the park,” observes biologist Felipe Melo, a professor at UFPE, “as the government imposes restrictions on land use, the families are poorer and more dependent on natural resources than those outside, but they also can’t leave because they have nowhere to go.”

Outside the environmental protection areas, wood is also extracted to fuel plaster production, as well as pottery kilns, bakeries, and pizzerias. Domestic and commercial consumption translates into an estimated loss of 30 million cubic meters of native forest each year, according to the Brazilian Ministry of the Environment.

The situation is similar in the Northeast’s Atlantic Forest biome. A 2015 study in Global Ecology and Conservation studied 270 families from seven communities in the states of Alagoas, Pernambuco, Rio Grande do Norte, and Paraíba, and registered average firewood consumption of 686 kg per year per person, which implies removal of 2,000 ha of forest per year in the 270 municipalities in the region containing this type of vegetation. “The lower the families’ incomes, the more they depend on extracting firewood,” says Melo. The same phenomenon is reported in forests in semi-arid or desert climates in Africa and India that are home to human communities.

Fewer native species
In Catimbau, characteristic species such as Myracrodruon urundeuva (known locally as aroeira) and Anadenanthera colubrina are most frequently extracted to build fences or houses, according to a study published in February of this year in Environmental Research Letters. In Parnamirim, another town in Pernambuco 350 km west of Catimbau where 20,000 residents make their living from extracting timber and plants, the researchers found that characteristic species of trees in the region tend to be replaced by others which grow quickly and can withstand changes caused by the itinerant farmlands and pastures, such as marmeleiro-do-mato (Croton sonderianus) and jurema-preta (Mimosa tenuiflora). Meanwhile, goats prefer tree branches with softer leaves over smaller shrubs and herbaceous plants with harder leaves, which are ignored and therefore become predominant in pasture areas.

Not only do leafcutter ants proliferate, human activities alter interactions between plants and other groups of ants and insects. “We saw that two types of services the ants provide to plants are lost: protection against herbivorous insects, and seed dispersal,” says Inara Leal. In the first case, she says, plants are more affected by stress in more open areas and accumulate less nectar in nectaries outside of the flowers, which attract ants. The ants in turn feed on herbivorous insects, which would attack the plants if they were not present. With less nectar and fewer ants, the plants become more vulnerable to insect herbivores. In the second case, human activities cause a reduction in populations and activity of ant species considered to be good seed dispersers, such as Dinoponera quadriceps. “As a result,” says Leal, “seeds are dispersed in smaller quantities and over shorter distances.”

At the Federal University of Rio Grande do Norte (UFRN), biologist Gislene Ganade may have found a solution to an old problem in reconstructing the Caatinga: trees planted in the field have trouble surviving in the dry climate, even though they are adapted to inhospitable environments. In her experiments, trees from 16 species were initially cultivated in plastic tubes until their roots reached a length of 1 m. Next, in June 2016 they were planted in holes in the Assu National Forest in Rio Grande do Norte, and received 4 liters of water.

“With water to supply the roots, the trees remained green for two months, even during the dry season, and after eight months, when it rained, they produced new leaves and fruit,” observed Ganade. She reports that 75% of the trees survived one year after planting. Based on this method, the teams from UFRN and UFPE intend to restore the vegetation in Catimbau. The plan is to create an experimental 5-hectare area with trees that can be used to produce honey or food for the park’s inhabitants and for the animals they raise.

The integration between raising goats, agriculture, and planting the tree species used for firewood is another strategy which has been considered to prevent environmental degradation and favor income for rural landowners. “Since [these residents] have no resources of their own to implement integrated crop-livestock type systems, participation by government bodies is essential through lines of credit and support for research,” says agronomist Luiz Antonio Martinelli, a professor at the University of São Paulo.

Public policies already in force have helped to preserve the Caatinga, observes Tabarelli, who has frequently visited Catimbau since 2012. “Income transfer programs, especially rural retirement, have slowed the exploitation of the Caatinga and left families less dependent on natural resources,” he observes. “Instead of hunting, the residents can buy chicken, and instead of taking wood from the forest, they can buy gas for cooking.”