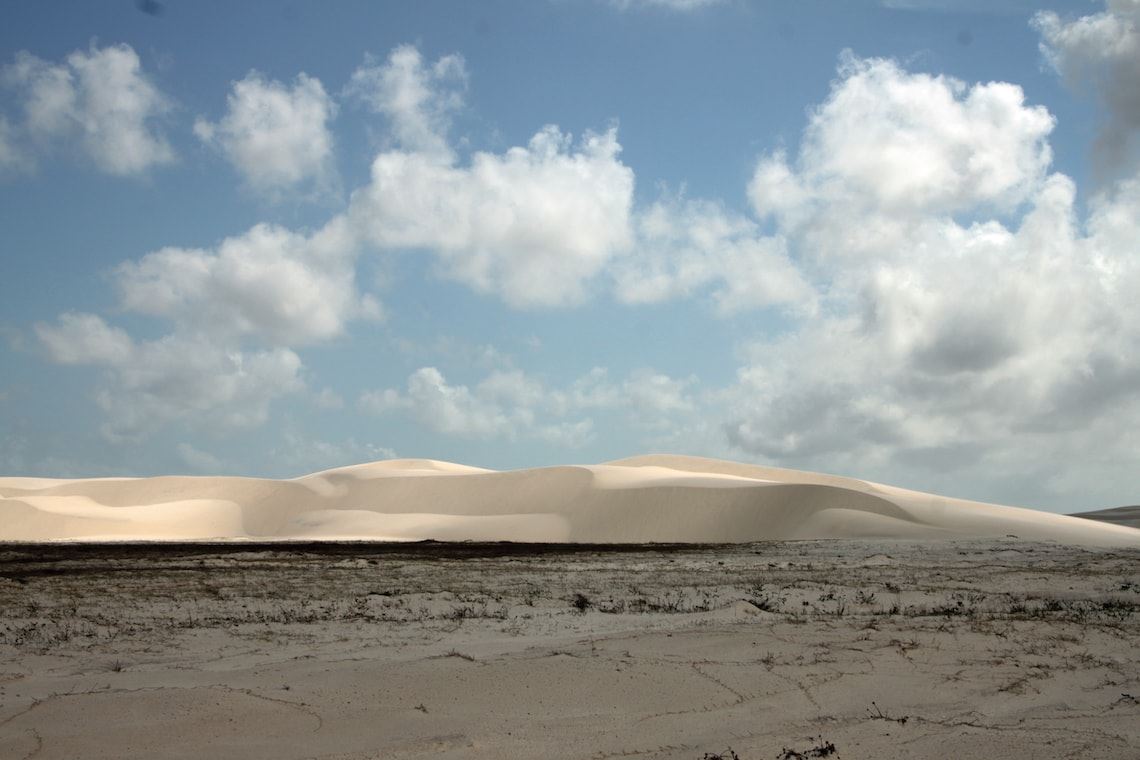 The dunes of the Caburé Peninsula in the northern extent of Lençóis Maranhenses can move several meters over just a few months, especially in the dry season between July and December. During this time of year, the winds are relatively strong, and the level of water stored in the lagoons between the dunes is at its lowest; as a result, the large, often crescent-shaped hills of sand are more likely to shift. “The dunes are extremely dynamic and can lose up to a third of their area or even change location entirely,” says oceanographer Denilson da Silva Bezerra from the Federal University of Maranhão (UFMA). In December 2015 and January 2017, he worked with colleagues from the Federal Institute of Maranhão (IFMA), the Brazilian National Institute for Space Research (INPE), and Ceuma University in São Luís, Maranhão, to take high-precision measurements from 1,700 locations in the dunes near the beaches of Caburé, a former fishing village and popular tourist destination in the municipality of Barreirinhas.Over the 14 months between the first and second measurements, the Caburé dunes diminished in height by an average of 30 centimeters (cm). According to the results published in the journal Scientific Reports in May, approximately 61,000 cubic meters of sand (somewhere between 90,000 and 100,000 tons) was moved in a southwesterly direction by winds reaching 70 kilometers per hour. The Caburé Peninsula is a region of sand trapped between the Atlantic Ocean and the Preguiças River that occupies an area reaching almost 3,000 hectares and composes 2% of Lençóis Maranhenses National Park, which is the size of São Paulo city  and is the largest dune field in South America. In Caburé, most of these sandy formations (77%) are 1 to 3 meters (m) high, and 22% of the dunes exceed 3 m; the largest formation reaches almost 12 m. Further inside the park, the dunes are larger and can reach 20 m in height for stretches of over 200 m.

The study coordinated by Bezerra is one of few to measure the heights of the dunes and monitor how they move. The researchers mounted geodetic GPS devices on quad bikes and drove over the dunes at a constant speed, close to a human walking pace. Geodetic GPS is far more accurate than the systems used by cell phones and automobiles—its margin of error is on the order of millimeters rather than several meters—allowing the group to obtain precise elevation, latitude, and longitude measurements at predetermined reference points.

A new basis for simulations
“We were able to directly measure the movement patterns of the dunes,” says Bezerra, who began taking the measurements as a professor at Ceuma University, a private institution that encourages its academic staff to conduct research. Prior to this study, few in loco measurements had been taken. Most computer models that simulate dune movements are fed by satellite images that have a much larger margin of error. Although the area analyzed was relatively small, the level of detail obtained by the researchers could serve as a reference for validating wider observations made with other methods.

“The precise measurements taken by this group are very important to the progress of simulations,” says German physicist Hans Herrmann from the Federal University of Ceará (UFC). Herrmann develops mathematical models to investigate the dune dynamics in Lençóis Maranhenses and says that it has always been difficult to use height data obtained from satellite imagery. “The photos have very low optical contrast, which affects accuracy,” he explains.

Surrounded by three major biomes—the Amazon, the Cerrado, and the Caatinga—and an important tourist destination in Brazil, Lençóis Maranhenses National Park has long attracted the interest of researchers as a landscape that has remained stable for thousands of years, despite the individual movements of the dunes. The park does not consist solely of rolling hills of sand; it also features seasonal lagoons, beaches, mangroves, and a river. Studying the behavior of its dunes helps scientists understand the region’s past and future, which could have significant impacts for its residents. “The surrounding areas are inhabited, and the dunes affect people’s lives as they advance over villages,” explains Bezerra, who plans to take in loco measurements from 10 other areas in Lençóis Maranhenses. Being able to anticipate long-term changes in the dunes, while difficult, could enable housing, fishing, and tourism to be better planned.