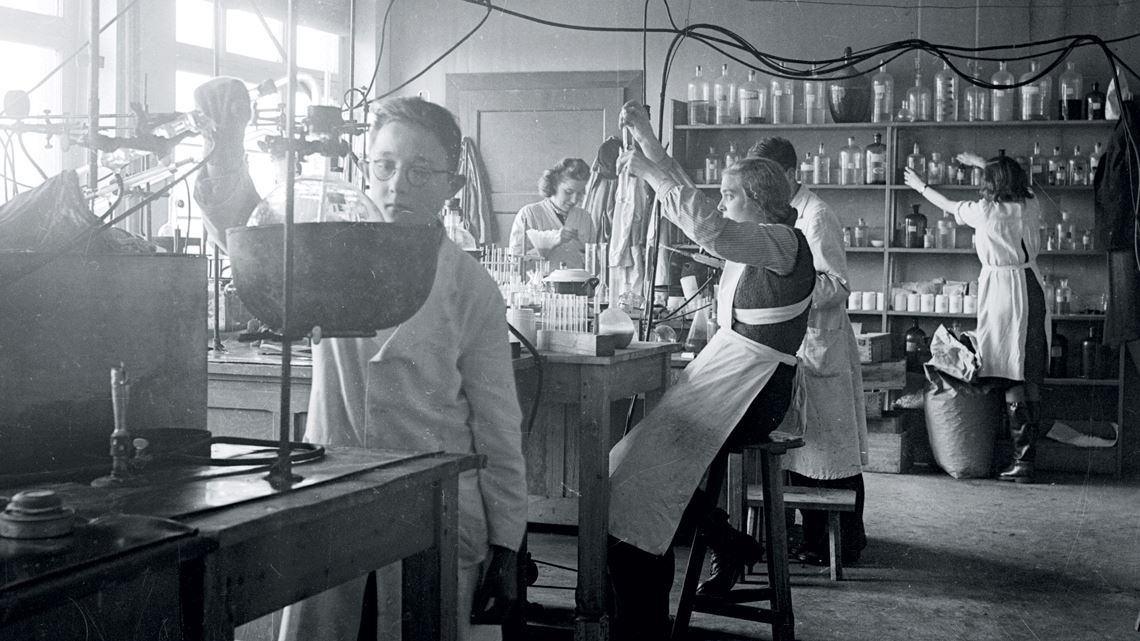 In February 1946, researchers at a laboratory in Bielefeld, Germany, mixed acids, alcohols, and animal pancreas to obtain insulin for human use

Every day about 7 million Brazilians take insulin. The hormone is needed to help control excessive levels of blood sugar, called glycemia, because some people’s bodies don’t produce enough of their own insulin. Diabetics know that by taking insulin, they will be able to prevent the advance of diabetes, a disease previously known to be fatal. That grim scenario changed with the creation of pharmaceutical insulin a century ago, and its subsequent production on an industrial scale. In Brazil the medicine was initially imported, and later manufactured, by Biobrás Bioquímica do Brasil, a company established 50 years ago.

The oldest recorded case of diabetes can be found on Egyptian papyrus dated 1552 BCE. However, the discoveries that finally brought the disease under control are just over 100 years old. During the last two decades of the nineteenth century, doctors and scientists realized that the disease was not caused by kidney problems, as had been thought previously. During this same period, it was postulated that alterations in the pancreas could lead to diabetes.

In 1921, Canadian surgeon Frederick Banting (1891–1941) began a series of experiments, aided by then medical student Charles Best (1899–1978). They injected pancreatic extract into dogs they had altered to become diabetic and saw a reduction in blood glucose. The study was conducted at the University of Toronto, in Canada, in the laboratory of Scottish physician John Macleod (1876–1935), who also supervised the research. The new substance was named in reference to the pancreas cells that produce it, called the islets of Langerhans, which had been identified years earlier (insula is the Latin word for island). 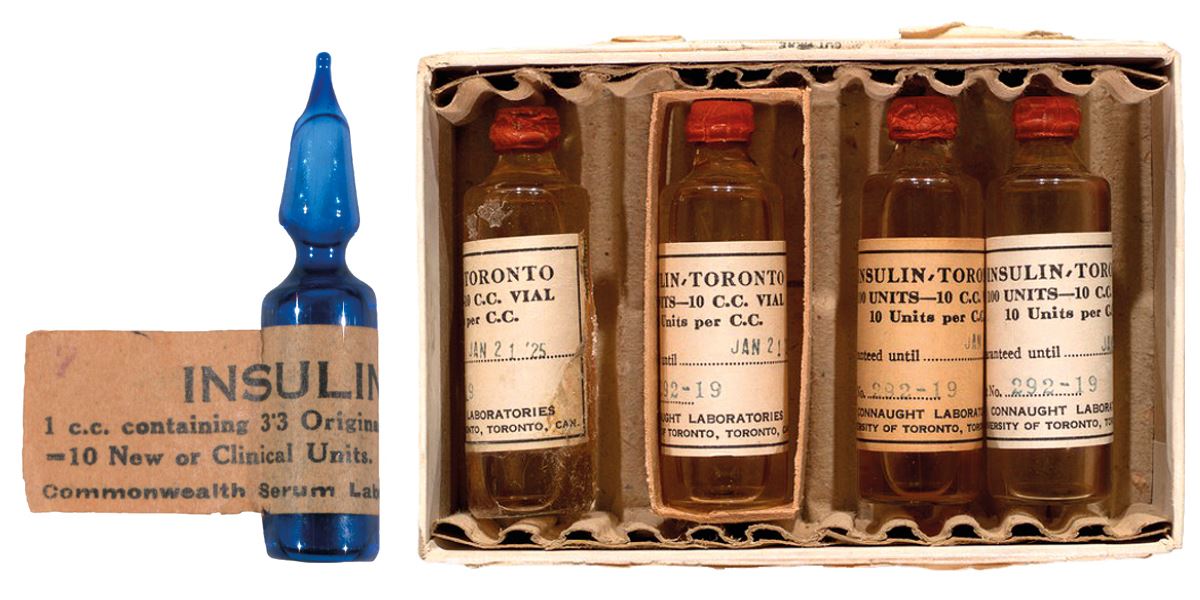 Purified insulin in a 1925 ampoule from Melbourne, Australia, and in flasks from a batch produced in 1924 in Toronto, CanadaUniversity of Toronto

In 1922, the researchers tested their pancreatic extract on a 14-year-old boy with diabetes who was being treated at Toronto General Hospital, but the side effects were too debilitating, and the experiment was stopped. Canadian biochemist James Collip (1892–1965) further purified the insulin, and the test was resumed. Subsequent injections—in the same patient—caused his blood glucose to drop from 520 micrograms per deciliter (mg/dl) of blood to 120 mg/dl.

Their discoveries were awarded Nobel prizes. In 1923, Banting and Macleod won the prizes for Physiology and Medicine. Both informally shared the credit and prize money with Best and Collip. In 1958, after identifying the amino acid sequence of the insulin molecule, British biologist Frederick Sanger (1918–2013) was awarded the Nobel Prize in Chemistry. In 1969, British biochemist Dorothy Hodgkin, who had received the Nobel Prize in Chemistry in 1964 for her studies in X-ray crystallography, used her technique to define the hormone’s spatial structure.

Until the beginning of the twentieth century, people with diabetes were put on a strict diet with an extremely low calorie intake which could be as fatal as the disease itself. “Insulin is a milestone in the history of medicine because people with Type 1 diabetes, whose bodies don’t produce this hormone, were condemned to die within a few weeks after the disease manifested,” says endocrinologist Domingos Malerbi, president of the Brazilian Society of Diabetes (SBD) and president of the Diabetes Department of the Brazilian Society of Endocrinology and Metabolism (SBEM). Malerbi adds that for those who have Type 2 diabetes (whose bodies do produce insulin, but in insufficient quantities), the new treatment can postpone the disease’s complications, such as blindness or infarction. 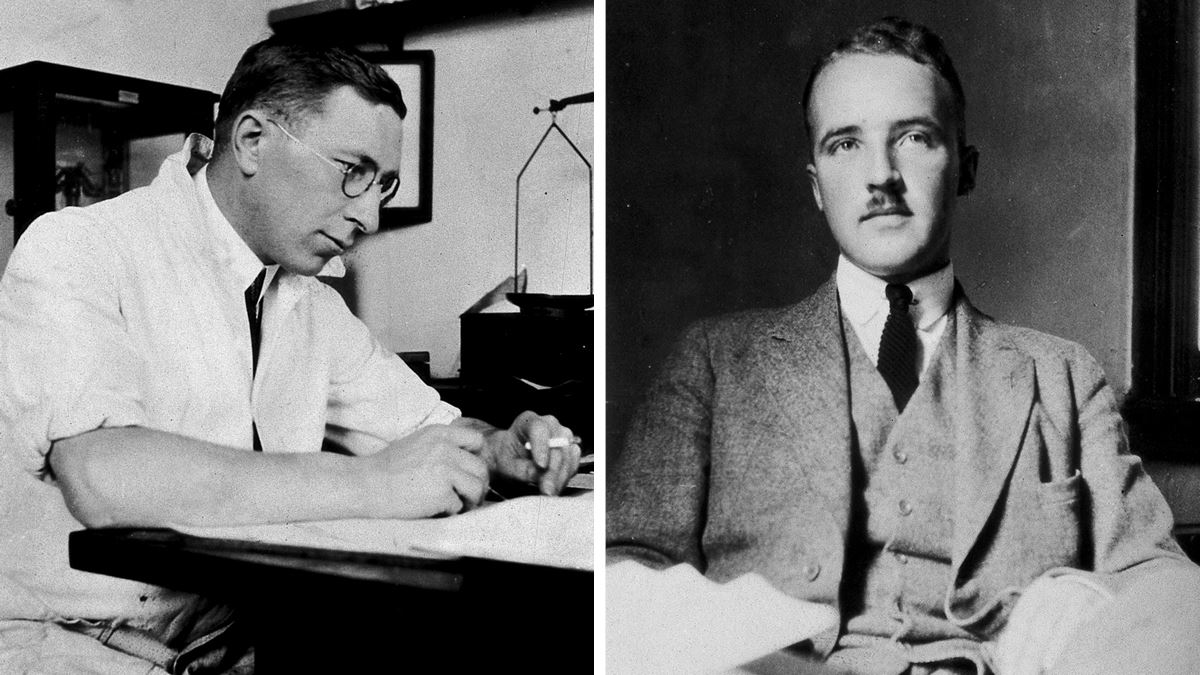 In late 1923, pharmaceutical companies in the United States and Europe began producing insulin. In Brazil, production began in 1978 and continued until 2001 at Biobrás, a company established in 1971 by physician Marcos Luís dos Mares Guia (1935–2002), a professor of biochemistry at the Federal University of Minas Gerais (UFMG). Later, Mares Guia was named president of the National Council for Scientific and Technological Development (CNPq) from 1991 to 1993. With initial funding from the Superintendency for Northeast Development (SUDENE), Biobrás began operations in 1974 in Montes Claros, in northern Minas Gerais, incorporating seven master’s students from the biochemistry department at UFMG, in addition to the company’s three partners.

“Marcos had a feel for biochemical engineering, even though he was a doctor,” commented engineer Guilherme Caldas Emrich, who Mares Guia invited to be a partner in the company. The third partner was engineer Walfrido dos Mares Guia, the doctor’s brother, then a professor at the Pitágoras preparatory school, which the two brothers had also created. Walfrido was later vice-governor of Minas Gerais State from 1994 to 1999 and Minister of Tourism from 2003 to 2007.

Biobrás benefited from a favorable political and economic climate. The 1970s were a time of intense economic growth, known as an economic miracle. Military governments had instituted a “policy of import substitution and protection for national industry,” observed economist Frederico Turolla of the College of Advertising and Marketing, in a 2001 study on companies that had been launched by universities. The research was developed for the Administrative Development Foundation (FUNDAP), a São Paulo state agency that closed in 2015. 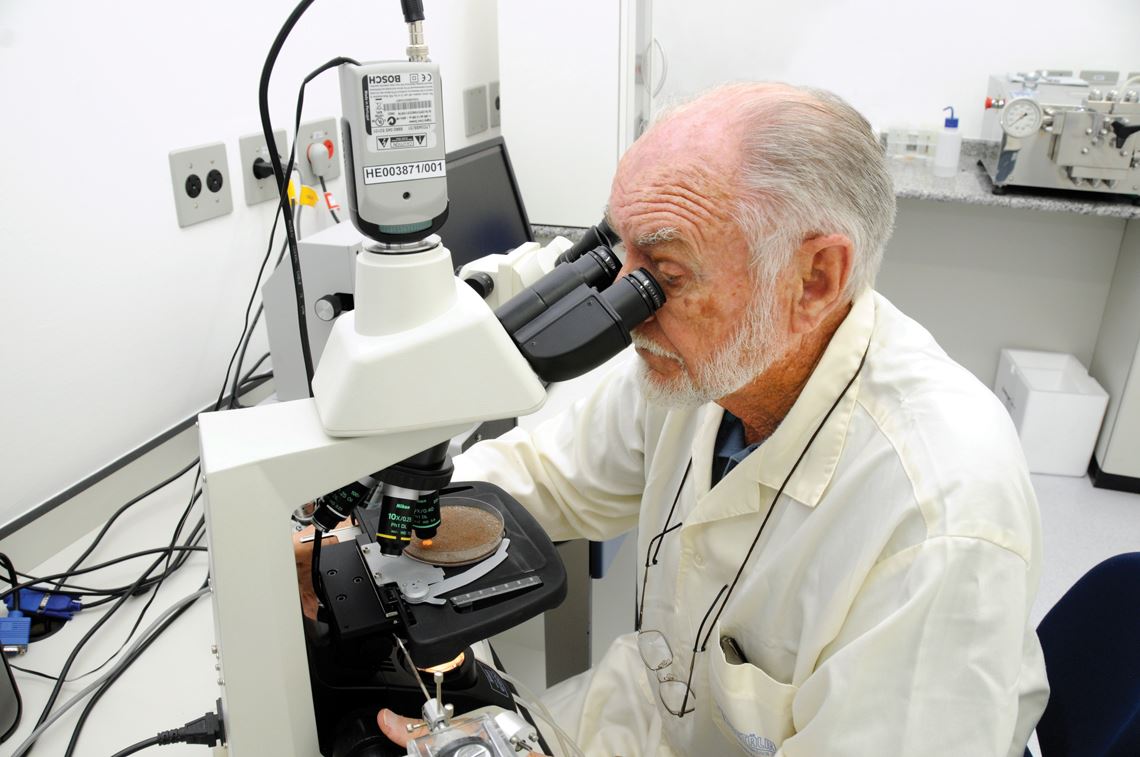 In the beginning, 80 kilograms of swine pancreas, supplied by slaughterhouses, yielded 1 milligram of insulin. In 1981, the North American pharmaceutical laboratory Eli Lilly, which had been the first to produce insulin on an industrial scale, proposed a partnership agreement with Biobrás and, as a result, Biofar was formed, with a 55% stake held by Biobrás and 45% by Eli Lilly’s Brazilian subsidiary. According to Emrich, the entire insulin production was delivered to Eli Lilly, who then distributed it in Brazil and exported it. In 1988, after the partnership was dissolved, Biobrás began handling its own distribution, mainly to the Ministry of Health.

That same year, Biobrás entered into a scientific cooperation agreement with molecular biologist Spartaco Astolfi Filho’s research team at the University of Brasília (UnB). The plan was to produce insulin using genetic engineering, thus avoiding dependence on raw material from swine; the first recombinant human insulin had been approved in 1982 in the United States. To speed up the work microbiologist Josef Ernest Thiemann (1931–2016), a Biobrás employee, went to work with Astolfi at UnB.

After obtaining the gene that would induce insulin production in bacteria, Thiemann managed the company’s production scale expansion, until they were working with two-thousand-liter fermenters. The patent for Biobrás’ transgenic medicine, applied for in 1998, was approved in the United States in 2000 (one year after they began production on a commercial scale), and received approval in 2010 in Brazil. In 2001, Novo Nordisk, one of the manufacturers that sold insulin in Brazil at below international market price, bought Biobrás for US$75 million (at 2001 values). “It was an offer that we couldn’t refuse,” says Emrich. He says Novo wanted access to the Biobrás market. 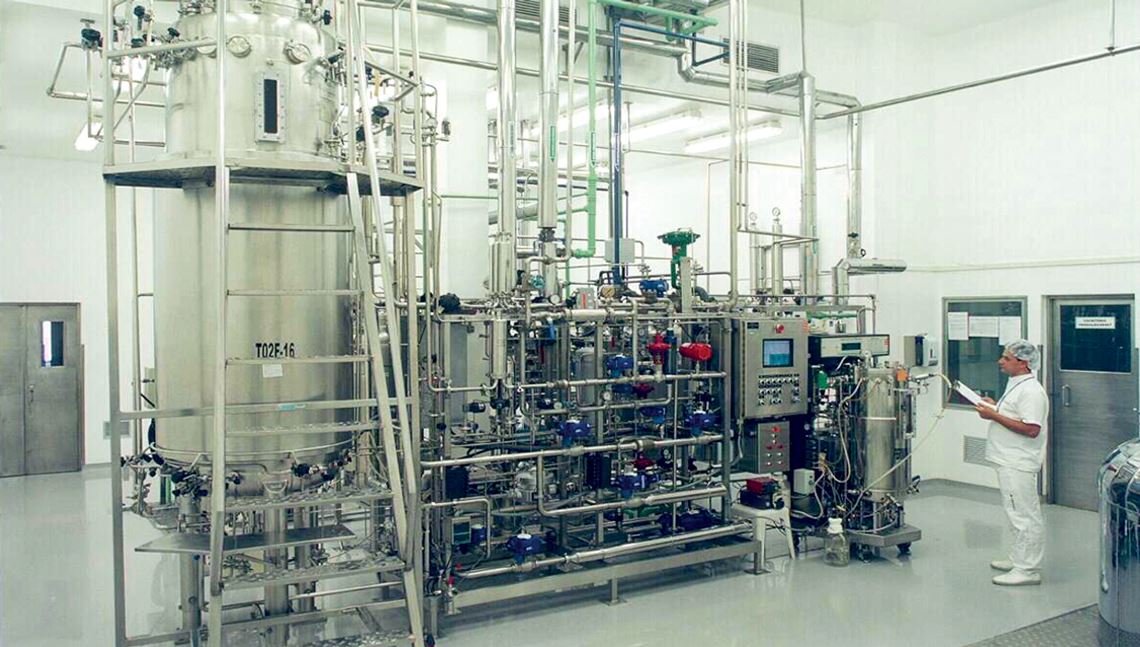 “The factory continued working and none of the 380 employees were laid off,” says industrial pharmacist Reinaldo Costa, vice president of the Montes Claros unit of Novo Nordisk. But there were changes. The recombinant insulin production unit was deactivated and adapted to manufacture an enzyme used in the production of insulin crystals. Since 2007, the Montes Claros factory has been importing the raw material—the crystals—from Denmark, then completing its formulation and packaging, and distributing the final product.

“The sale of Biobrás created a lot of disenchantment in the scientific community, as it represented a disincentive for innovation coming out of the university and for creating companies. But we didn’t stop,” says Astolfi, now at the Federal University of Amazonas (UFAM). In 2005, he and Thiemann developed a biosimilar version of human growth hormone for the pharmaceutical company Cristália. Produced by genetic engineering and bacterial fermentation, it was approved by the Brazilian Health Regulatory Agency (ANVISA) in 2019.

After the sale of Biobrás, Emrich and Walfrido (Marcos dos Mares Guia died in 2002) created a biotechnology investment fund and partnered with Biomm, a company that imports insulin, although it had announced its intention to produce the hormone in Brazil. “We are in the approval process for the factory in Nova Lima, Minas Gerais, which will produce recombinant insulin from E. coli, using our own technology,” says pharmacist-biochemist Ciro Massari, the company’s marketing director.

There is another prospect for resuming insulin production in Brazil. In 2006, the Pharmaceutical Technology Institute (Farmanguinhos), a unit of the Oswaldo Cruz Foundation (FIOCRUZ), announced its intention to produce recombinant human insulin through a technology transfer agreement with the Ukrainian manufacturer Indar. This would have provided for the import of 18 million vials of the hormone. However, an ANVISA team visited the factory in Kiev, Ukraine, and disqualified their production practices, cancelling the import.

In 2017, the Ministry of Health transferred the responsibility for producing insulin in Brazil using Ukrainian technology to the Bahia Foundation for Scientific Research and the Technological Development, Supply, and Distribution of Medicine (BAHIAFARMA), a state governmental agency. In 2018, Indar obtained the ANVISA certificate of good manufacturing practices, and the Bahian company delivered the first batch of Ukrainian insulin to the Ministry.

“Farmanguinhos collaborates in the technological training of the Bahian lab’s technical team,” they informed Pesquisa FAPESP via a letter. “The technology transfer is in progress and Farmanguinhos has already reproduced the process on a laboratory scale through the final stage of crystal (active substance) purification.” The institute’s plan is to contribute to supplying the public health system and help maintain insulin prices at affordable levels. The price of each dose imported from international manufacturers currently varies on average from R$10 to R$15, depending on the type of insulin (fast or slow acting).

The market continues to be highly disputed today, and, as before the creation of Biobrás, all insulin consumed in Brazil is imported.