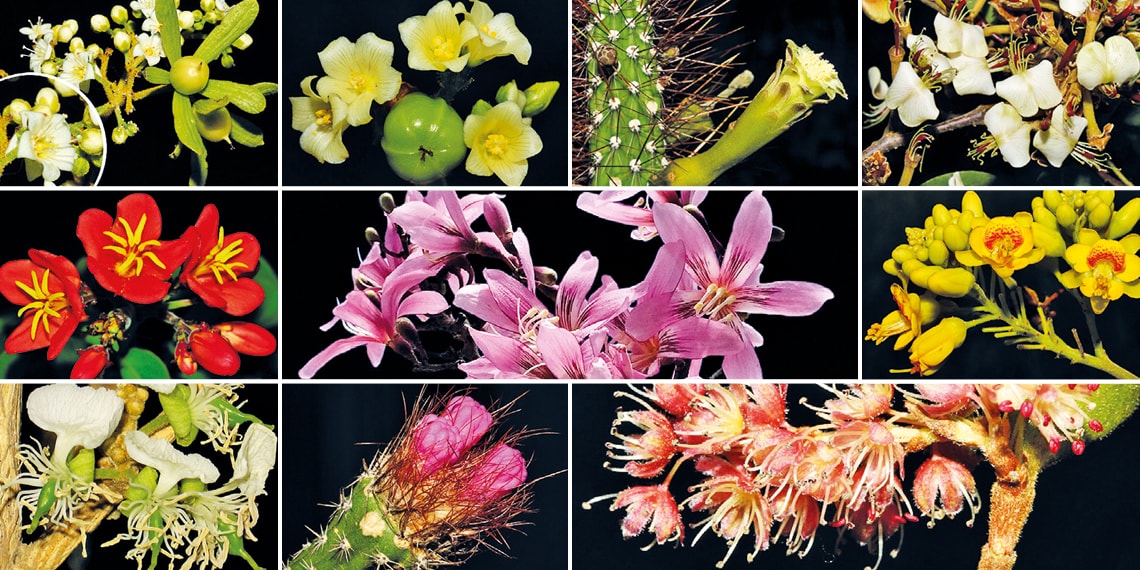 Some of the 3,347 species of flowering plants in the Caatinga

The only uniquely Brazilian ecosystem, the Caatinga (semiarid scrublands) is home to a range of flowering plants (angiosperms) proportionally more diverse than the Amazon rainforest. On average, there are 4 species per thousand square kilometers (km2) in the Caatinga and 2.5 species per thousand km2 in the Amazon (Journal of Arid Environments, January 6). The finding is the result of a survey by researchers from the State University of Feira de Santana (UEFS) and the Federal University of Bahia (UFBA). In the study, botanist Moabe Fernandes and his colleagues listed 3,347 angiosperms species found in the Caatinga, which covers an area of 850,000 km2—the Amazon rainforest is six times larger and has 11,900 species. Of the total number of angiosperms found in the Caatinga, 526 species are exclusive to this ecosystem. Another 1,319 (39.4% of the total) are shared with the Amazon, the Cerrado (wooded savanna) and the Atlantic Forest. In the last 10 years, roughly 90 new plant species from the Caatinga have been described, such as Prosopanche caatingicola, a parasitic root; Ceiba rubriflora, a tree with large red flowers; and Stemodia perfoliata, an herb originally collected by French botanist Auguste de Saint-Hilaire (1779–1853) that remained unnamed at the National Museum of Natural History in Paris for two centuries.