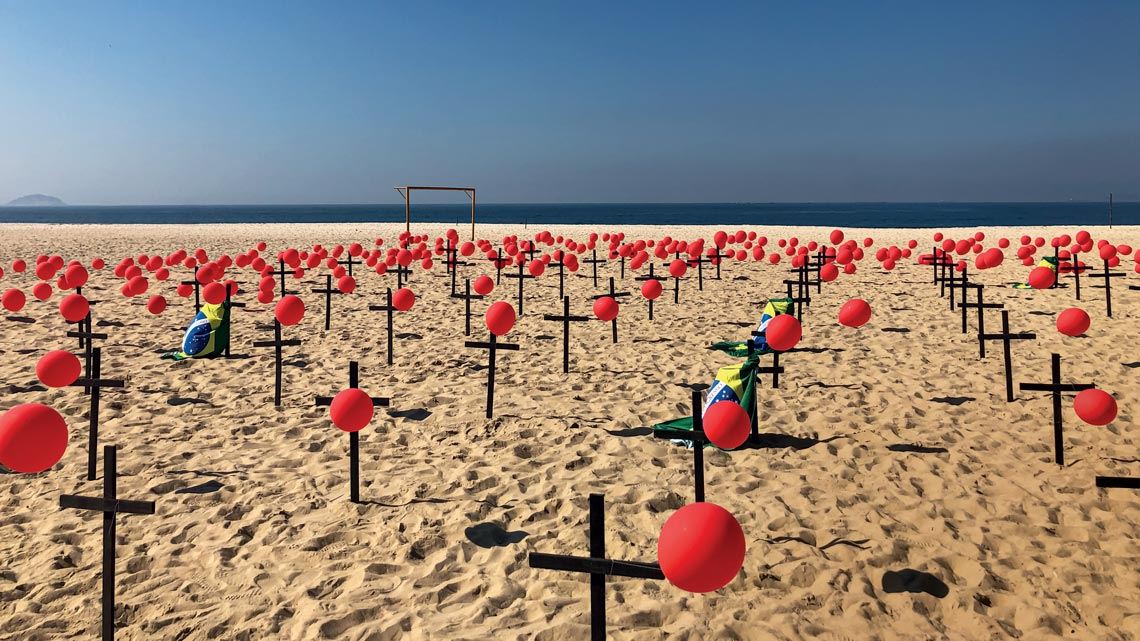 Soon after the novel coronavirus first emerged in China in December last year, causing a mysterious and potentially fatal disease initially thought only to affect the respiratory system, experts began investigating the fatality rate. One of the first published estimates, based on hospitalized patients in the Chinese city of Wuhan, showed a death rate of 15%, after six of the 41 patients in what was then the epicenter of the epidemic died from the infection. Nine months after it all began in China, with more than 33 million cases worldwide, one million dead, and countless scientific studies, that figure has fallen dramatically. According to studies from around the world, the COVID-19 fatality rate ranges from 0.5% to 1%, but a definitive number has still not been reached. Like many issues related to the disease and the SARS-CoV-2 virus, the subject is highly complex, starting with the challenge of obtaining the two essential pieces of information needed to accurately calculate the mortality rate: the number of people infected by the virus and the number of deaths caused by COVID-19. Although it is difficult to measure the figures of any pandemic while it is still ongoing, especially when it is a new disease, measuring the true extent of the novel coronavirus’s severity is further complicated by some of its specific characteristics, such as the large proportion of asymptomatic cases, the broad range of clinical manifestations of the disease, and the nature of the immune response.

“This epidemic has put to the test everything we thought we knew about immunity, infection, and the epidemic curve,” says epidemiologist Aluísio Barros, from the Federal University of Pelotas (UFPEL) in Rio Grande do Sul, one of the leaders of the scientific team behind Epicovid19-BR, the largest populational study of SARS-Cov-2 carried out in Brazil, which estimated a national mortality rate of 0.7% in its fourth and most recent iteration.

The CFR can vary enormously between countries, ranging from 0.1% to more than 25%. This is due to various factors, including the country’s testing capacity (the more tests conducted, the more mild and asymptomatic cases are diagnosed, lowering the fatality rate), demographics (the older the population, the more likely people are to die of COVID-19), and health care access.

In mid-September, the Coronavirus Resource Center at Johns Hopkins University, USA, stated that the case fatality rate in Brazil was 3%, equal to that of the USA. Mexico and Ecuador, the two countries with the highest fatality rates on the list, were at 10.6% and 9.2% respectively. India, the second most populous nation in the world and second only to the USA in terms of number of cases, had a much lower rate of 1.6%.

One of the issues is that the CFR only considers confirmed cases recorded in official statistics, the criteria for which can differ between one national government and the next. For most countries, it is not possible to identify and record every person who is asymptomatic or has a mild enough form of the disease that they never seek an official diagnosis. This increases the proportion of deaths among all cases, suggesting a higher fatality rate than the reality. For this reason, the CRF is not always the best indicator of the deadliness of a given microorganism or disease.

The IFR is better suited to this purpose, but it can only be calculated accurately if the total number of people infected with SARS-CoV-2 is known. Because testing an entire population would be so difficult and expensive, governments, universities, and research centers usually estimate how many people in a country, region, or city are infected, whether symptomatic or not and whether diagnosed or not, based on information from a sample population. These studies, like the one carried out by UFPEL, are known as serological surveys, and involve mass testing for antibodies against the virus.

The problem, however, is that most of these surveys have shown that the presence of antibodies falls over time, raising questions about the effectiveness of the tests and the durability of the humoral immune response (that which involves antibodies) to the infection. “Although the prevalence of antibodies in the population has fallen, the total number of people infected has not decreased; it only increases over time,” says Barros.

A large study conducted in Iceland and published on September 1 shed light on some of the doubts about humoral immunity. On the small European island, which has 364,000 inhabitants and had only recorded 10 COVID-19 deaths by mid-September, 15% of the population had already taken an RT-PCR quantitative molecular test by June 15, which detects genetic material from the virus.

To investigate the humoral response, the Icelandic researchers began with an initial sample of more than 30,000 people and used six different types of antibody tests, concluding that some antiviral antibodies do not reduce in number four months after the initial diagnosis. What changes, according to the study, is the type of antibody detected by each test—and only two of these tests are capable of detecting the antibodies that do not decrease over time to provide an accurate measure of seropositivity.

By more precisely calculating the number of people who have already been infected, scientists say they have been able to better estimate the fatality rate in the country, which they put at 0.3%. “Our estimate of the infection fatality risk is lower than but consistent with estimates described by others,” wrote the authors in The New England Journal of Medicine, citing the rates observed on the Diamond Princess cruise ship (0.6%), in China (0.66%), and in the German town of Gangelt (0.4%). They state that among those infected in Iceland, 56% had previously been diagnosed by PCR testing; 14% were in quarantine and had not taken a PCR test or had received a negative result; and 30% were not quarantined and had not tested PCR-positive.

“We therefore conclude that, despite extensive screening by PCR, a substantial fraction of infections were not detected, which indicates that many infected persons did not have substantial symptoms,” added the authors. According to official data from positive PCR tests, the case fatality rate (CFR) was 0.6%, twice the infection fatality rate (IFR).

In the Brazilian state of Maranhão, which according to the State Health Department’s COVID-19 report for September 14 had confirmed a total of 162,998 cases and 3,590 deaths, a serological survey of 3,156 people carried out between July 27 and August 8 had surprising results. The prevalence of antibodies in the state was 40%. In medium-sized cities of 20,000–100,000 inhabitants, the rate was as high as 47%.

Based on these data, the infection fatality rate in the state was calculated at 0.17%. “It was a surprise. Nobody thought we would see a prevalence of 40%, nor that we would have such a low fatality rate—one of the lowest in the world. We are considering genotyping the virus that circulated in the state to see if there is anything different about it,” epidemiologist Antônio Augusto Moura da Silva, leader of the study and a professor at the Federal University of Maranhão (UFMA), told Pesquisa FAPESP, pointing out that the state has a young population less at risk of dying from the disease.

On top of the challenge of identifying how many people have been infected with the novel coronavirus, the researchers from Maranhão also faced difficulties obtaining the number of deaths caused by COVID-19. Brazil tests few people and it often takes a long time to receive the results. To make things even more difficult, decisions on cause of death are often made after the death has been declared, meaning many COVID-19 deaths are not recorded as such in the Health Ministry’s Mortality Information System (SIM). This leads to a high level of underreporting, a common situation not only in Maranhão, but nationwide.

The lack of confirmed diagnoses may explain another phenomenon observed in Brazil and other countries: the excess number of deaths from natural causes this year compared to the five-year average for the same period. A report by global public health organization Vital Strategies indicated that by June 6, there had been 22% more natural deaths in Brazil than expected since COVID-19 claimed its first victim in the country on March 16.

Moura da Silva, from UFMA, says that in his research, he attributed one-third of the excess deaths in the state to COVID-19. “This represents 15% more than the officially reported number of deaths,” he says. He attributed the other two-thirds to other causes. “As health care services focused on COVID-19, especially in May when the pandemic peaked in Maranhão, many people avoided hospitals due to a fear of getting infected; meaning more died at home of heart attacks, for example. This happened worldwide.”

A fatality rate of 1% or less, like the 0.17% calculated in Maranhão, may seem like a small percentage, but not when there are hundreds, thousands, or millions of people infected in a short period of time. “What happens with COVID-19 is you get a high number of cases in a very short time, which leaves us in a difficult situation,” says infectologist Esper Kallás, from the Department of Infectious and Parasitic Diseases at the School of Medicine (FM) of the University of São Paulo (USP). According to him, comparisons with other viruses and diseases should be made on a case-by-case basis. “If you compare its fatality rate with yellow fever, COVID-19 kills proportionally much fewer people. Yellow fever has a very high mortality, as does Ebola.”

The fatality rate of COVID-19, experts point out, varies widely depending on the age of the patient. In Maranhão, based on data for people aged over 70, the rate rises to 2.4%. In Iceland, the IFR in this age group is 4.4%. “It is difficult to interpret such general indicators that refer to large population groups, of all ages, with different morbidity patterns, often from regions with social inequalities, including access to health care, such as Brazil,” states epidemiologist Maria Rita Donalisio, from the School of Medical Sciences (FCM) at the University of Campinas (UNICAMP).

Together with a team of colleagues from the COVID-19 BR Observatory, a group of researchers dedicated to studying and understanding the disease, Donalisio has been looking at data on COVID-19 fatality rates among hospital patients. “These data are heterogeneous across the country and express the quality and speed of care people receive, in addition to the capacity for diagnosing confirmed cases,” she says. “They also reflect differences in hospital structure and the clinical experience of care teams, especially in relation to critical cases that require clinical management in the ICU [Intensive Care Unit] and mechanical ventilation.” In the end, says the doctor, all of these factors contribute to the number of deaths caused by COVID-19, and consequently, the fatality rates.