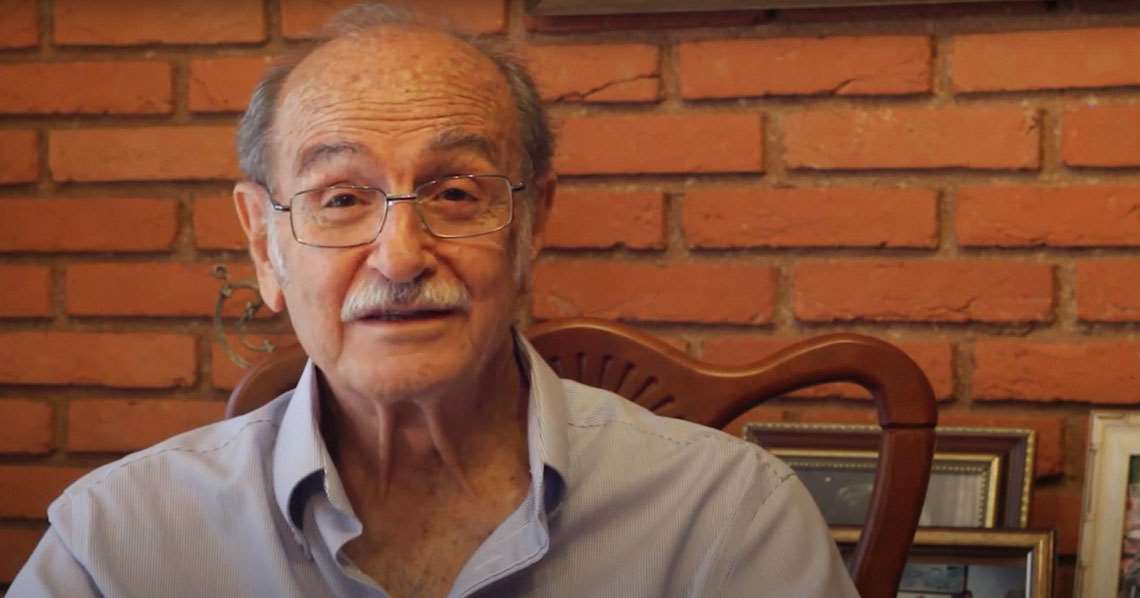 Salati in 2016, providing a testimonial for a video about the fiftieth anniversary of CENA-USP, where he was once director

A unique figure and a unifying influence in hydrology and climatology research, Enéas Salati had an ability to attract and train competent professionals, and was a key figure in getting the field established in Brazil. The researcher, who suffered from Alzheimer’s disease, died on February 5 at the age of 88, in Piracicaba, in the state of São Paulo. He leaves behind a widow and four children, as well as grandchildren, great-grandchildren, and great-great-grandchildren.

An agronomist educated at the Luiz de Queiroz College of Agriculture of the University of São Paulo (ESALQ-USP) in Piracicaba, Salati was a researcher at the Center for Nuclear Energy in Agriculture (CENA), linked to the same institution. Analyses of isotopes such as oxygen-18 and deuterium allowed him to trace the origins of much of the Amazon’s rainfall.

In the late 1970s, Salati was the first to quantify precipitation recycling, a moisture feedback mechanism in the Amazon rainforest, showing that part of the rain that feeds the forest comes from the forest’s subsoil, captured by tree roots. Climatologist José Marengo, the research and development coordinator at the Center for Natural Disasters Monitoring (CEMADEN), explains: “Through processes of evaporation and transpiration from plants, the forest releases moisture into the atmosphere, which ends up falling in the form of rain; studies suggest that between 25% and 75% of the rain that falls in the forest is generated by the forest itself.”

In the early 2000s, Marengo worked with Salati on research into the “flying rivers,” a metaphorical expression for the vast volume of atmospheric moisture that rises from the forest, meets the Andes mountain range and travels towards the south-central part of the South American continent. “Using isotopes as tracers, an idea of Salati’s that is simultaneously complex, yet simple, we can study the amount of rain in a given region that originated in the Amazon,” he says.

Reynaldo Victoria, who was supervised by Salati during graduate school and who was also a professor and researcher at CENA-USP, says that the isotope-tracking method Salati proposed shows that Amazonian moisture, transported by flying rivers, is important for the generation of rainfall in the Central West, Southeast, and South regions of Brazil, and even in Argentina.

Victoria believes that the researcher’s work was fundamental in pointing the way towards creating agriculture that doesn’t require deforestation and works sustainably, in harmony with the forest. Knowing the means by which the Amazon influences the climate on a continental scale allows us to understand how the country’s principal economic activity could suffer from drastic changes in rainfall patterns, one of the likely consequences
of deforestation.

Climatologist Carlos Nobre, a researcher at the USP Institute for Advanced Studies, explains that Salati’s research changed the understanding of the relationship between vegetation and climate. “He was a pioneer in showing that the forest is a crucial climatic factor in its own maintenance. Thus, the Amazon isn’t a mere response to the climate, it also modifies the climate and creates the conditions for its own permanence,” he explains. But deforestation threatens this permanence, warns Nobre.

Marengo describes Salati as a researcher who was knowledgeable about not only the Amazon’s climate, moisture recycling, and flying rivers, but also worked with weather extremes, wind energy potential, and carbon credits, with a comprehensive vision of the environment. “He was both intense about his work and a calm and simple person.”