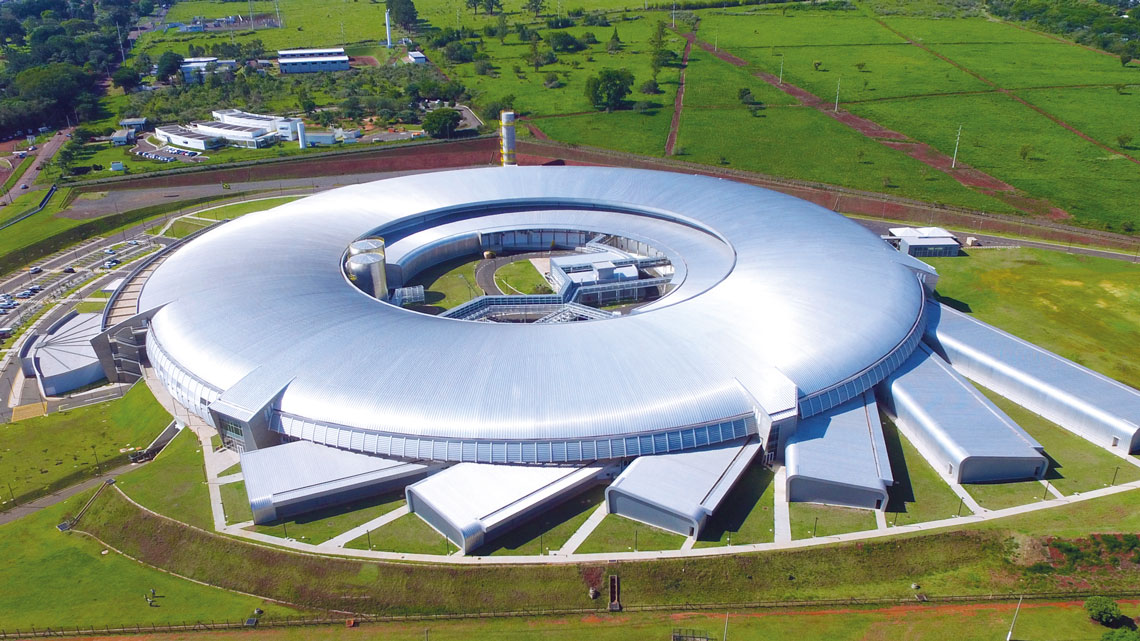 In December, Sirius, one of the most advanced synchrotron light sources in the world, and the largest, most complex research instrument ever built in Brazil, produced its first X-ray microtomographic images. The images showed three-dimensional details of a rock and a mouse’s heart. “These first microtomographic images of rocks demonstrate the functionality of this great machine,” says physicist Antônio José Roque da Silva, director of CNPEM and director of the Sirius project.

Installed at the campus of the National Center for Research in Energy and Materials (CNPEM), in Campinas, São Paulo, Sirius occupies a 68,000-square-meter, donut-shaped, temperature-controlled building, erected on a thick base of concrete specially designed to absorb ground vibrations. Inside are three particle accelerators connected to each other. They generate a beam of negatively charged particles (electrons), thousands of times thinner than a human hair, and keep them circulating in a ring 518 meters in circumference, at very close to the speed of light. Powerful magnets attached to the ring force the particles to deviate slightly so they complete the circle. With each change in trajectory, the electrons lose some of their energy as a special kind of light. This synchrotron radiation (specifically in the X-ray range) penetrates even the densest materials, such as rocks, allowing their structure to be studied at the atomic scale.

The December images were produced less than a month after the three accelerators began functioning together for the first time. Electrons generated in the first accelerator are propelled in a straight line to near the speed of light and injected into the second accelerator, which is circular. There, they gain energy and are directed to the third, called the storage ring, from which synchrotron radiation is extracted.

To accomplish this, thousands of machine components (magnets, particle position sensors, vacuum cameras, electrical circuits, and computers) need to work in tune and in sync. To give an idea of the task’s complexity, the accelerators’ parts must be aligned to the precision of micrometers (thousandths of a millimeter), in order for the electron beam to remain stable in the storage ring. Sirius’s building is new, having been inaugurated in November 2018, and its structure is still undergoing subtle movements due to settling. These movements cause alterations in the electron trajectory, which, despite being on the order of micrometers, are sufficient to ruin the particle beam.

In the first integrated test, done in November, the particles completed only two revolutions in the storage ring. Calibration improvements to the system that corrects the particle orbit were made over the following weeks to increase beam stability. By mid-December, the electrons completed 150 revolutions, performed in an extremely brief 250 millionths of a second. When it reaches full operating capacity, the machine will function continuously, with the electrons performing 600,000 revolutions per second.

The current configuration of Sirius was planned in 2012 with a budget of R$1.8 billion. Construction began in 2014. It replaces the UVX, the first synchrotron light source in the southern hemisphere, which had in recent years ceased to be competitive. CNPEM teams designed the new equipment and ordered most of its parts from Brazilian high-tech companies. In just five years, the building was erected and the particle accelerators installed.

During the accelerator testing stage, the CNPEM teams were working on assembling the first 3 of Sirius’s 13 eventual experimental stations. The first station to be ready will be Manacá, which was virtually complete in December. This station will receive synchrotron light in the X-ray frequency range and will allow three-dimensional images of proteins to be made, showing the precise location of each atom, which is important in developing pharmaceuticals. According CNPEM directors, by March at least one other station, Cateretê, should be complete. It will have the capacity to obtain three-dimensional images of living cells and record very fast phenomena, such as changes in the DNA molecule. A third station, Mogno, which is aimed at studying denser materials such as rocks, should also be partially ready.

On December 11, R$180 million was deposited to the CNPEM account, equivalent to 80% of the 2019 budget, the balance having been received earlier in the year. With this amount, the directors believe it will be possible to start assembling another three or four experimental stations this year. They project that starting in the second half of 2020, researchers with more experience using this type of equipment will start their first experiments with Sirius, which should be fully complete by the end of 2021. “In just over five years, we’ve been able to put Sirius to work, even with the country having gone through one of the worst crises in recent history,” says Silva.