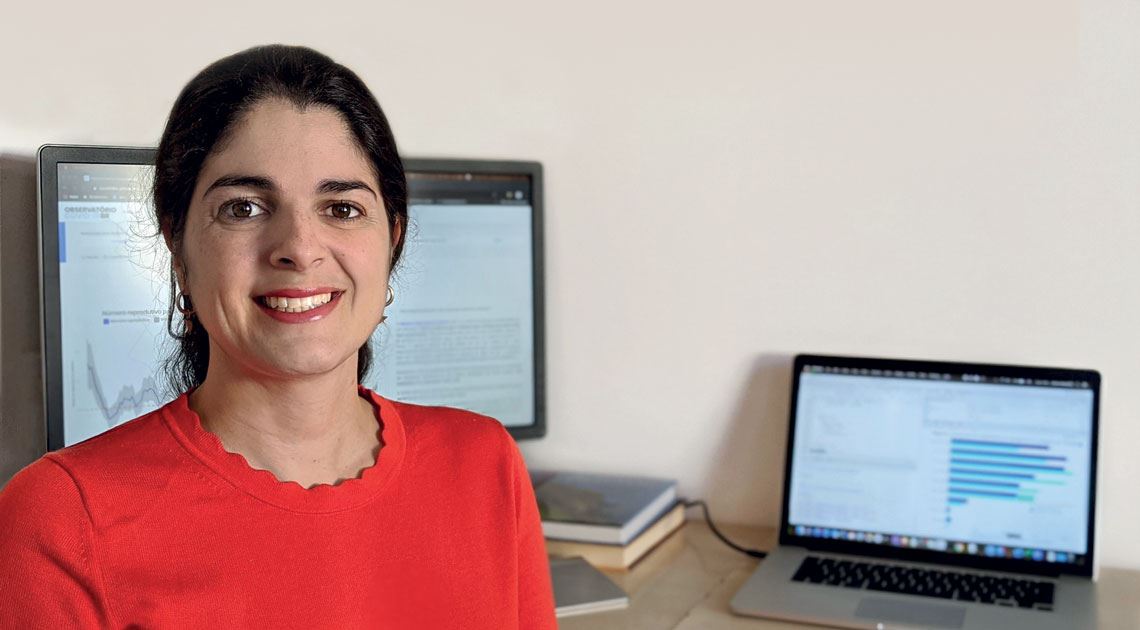 For Flávia Marquitti, biology and mathematics have always gone hand in hand. It was because of her work in these two fields that she was invited to join the COVID-19 BR Observatory in March. Formed by scientists from various institutions in Brazil, the project aims to gather and disseminate scientific information on how the pandemic is advancing in the country, including statistical analyses, simulations, and forecasts based on mathematical models.

“The project is a great example of the importance of integration between different fields,” says the 34-year-old scientist, who was born in São José do Rio Pardo, in the interior of São Paulo State. The observatory’s website has been online for about three months, providing data on how the pandemic is spreading around the country, the severity of cases, and hospital bed capacities.

In 2007, in the final year of her undergraduate degree at the Institute of Biology (IB) of the University of Campinas (UNICAMP), Marquitti decided to start a new course at the Institute of Mathematics, Statistics, and Scientific Computing (IMECC), at the same institution. “I was always curious about seeing biology through numbers, and vice versa,” she says. It was then that she became interested in the mathematical modeling of ecology and evolution, topics encompassed by a field of research known as biomathematics. “Mathematical models allow us to make predictions about the emergence and extinction of species and to understand patterns in interactions between individuals of different species,” she explains.

While studying her PhD at the Institute of Biosciences (IB) of the University of São Paulo (USP), Marquitti investigated the relationships that can arise from mutualistic interactions—a term that describes mutually beneficial interactions between individuals of different species. “On a fellowship in the USA and Portugal, I learned more about evolutionary game theory.”

The opportunity to join the observatory arose while she was on a postdoctoral fellowship at the Gleb Wataghin Physics Institute (IFGW) at UNICAMP, studying evolutionary models of cooperation, a phenomenon that can be observed in various species, including social insects, such as ants and bees. “At the observatory, I have been attempting to calculate the COVID-19 reproduction rate, known as the effective R.” The basic reproduction rate of the infection measures its potential to spread in a given region at a given time. If the rate is greater than 1, an infected person contaminates more than one person on average, meaning the virus will continue to spread. If it is less than 1, fewer people are infected over time, and the total number decreases. “These are important data for formulating public policies and informing decision-making—on whether to extend or end the quarantine, for example.”