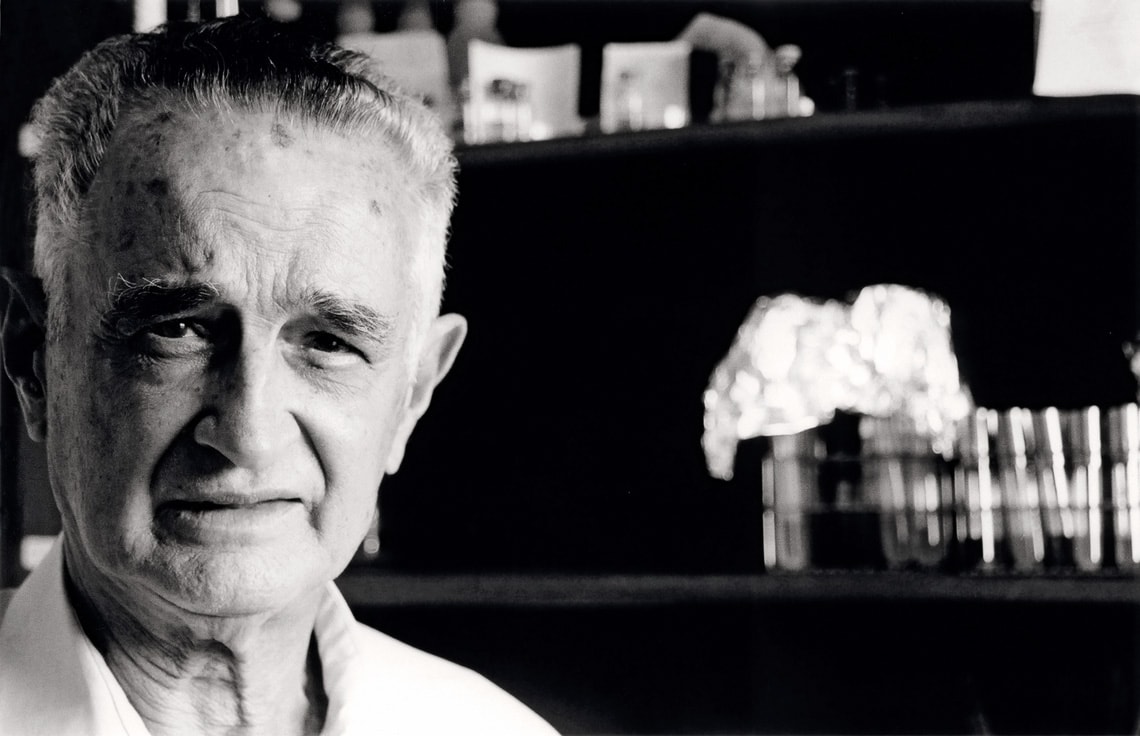 In the last years of his life, Pavan worked at the USP Institute of Biomedical Sciences

In May this year geneticist José Mariano Amabis, a retired professor at the Institute of Biosciences at the University of São Paulo (IB-USP), was told that there were worms on his patio that would kill any pigs that ate them. “Don’t kill them,” the geneticist said, on his little farm in São Bento do Sapucaí, in the Serra da Mantiqueira mountain range, in Sao Paulo State. On the floor next to the barbecue grill was a tangle of cream-colored larvae, each two centimeters long, which would transform into Rhynchosciara papaveroi flies.

He put them in a box, went out looking, and found more. Remarkably, his discovery happened to coincide with the year that marks the centenary of the birth of Crodowaldo Pavan, one of the pioneers of Brazilian genetics, who made his greatest discovery with a related species: R. angelae, now known as R. americana. When he died ten years ago, the researcher’s contributions, which began with fly DNA, moved on to institutionalizing genetic research in Brazil, and ended with science communication, were detailed in Pesquisa FAPESP in a special supplement. 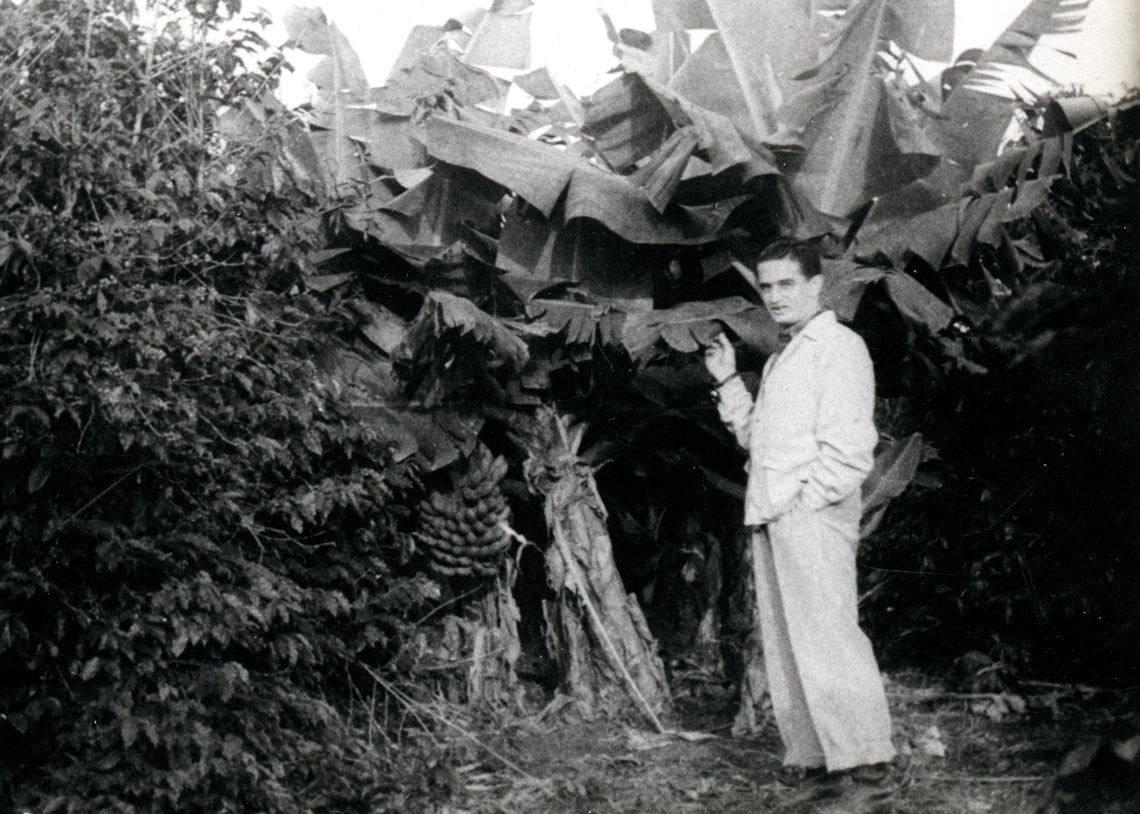 Pavan in a banana plantation on the coast of São Paulo, where he discovered the larvae of Rhynchosciara Comissão Memória Collection of the Genetics Department

For Pavan— then a teaching assistant for Professor André Dreyfus (1897–1952) at USP’s School of Philosophy, Sciences, and Languages and Literature—the discovery was even more fortuitous than that of Amabis. When he kicked a fallen banana tree trunk in Praia Grande, on the São Paulo coast, he found “a cake of beautiful red worms,” as he phrased it, in an interview recorded in 2002 by students taking a course taught by geneticist João Morgante. (Today, Morgante is a retired IB-USP professor dedicated to the department’s Memory Commission.) Pavan returned to his lab and left the bag of worms in a corner. When he remembered to look at them in the microscope, it was already 11:00 at night. “I dissected a worm and saw a salivary gland. I saw the cells, the nucleus. I crushed it and saw the largest chromosome that I’d ever seen, a polytene chromosome.” These are DNA packets whose genetic material is replicated to form bulky structures that, when dyed, form characteristic stripe patterns known as banding.

Only later, in consultation with zoologist Ernest Marcus (1893–1968), did Pavan discover that they were larvae of some insect—not worms, as he had thought. In 1951, he and colleagues described the large chromosomes of Rhynchosciara larvae. In 1955 Pavan and his assistant Marta Breuer (1902–1977) reached some controversial conclusions regarding certain regions of these chromosomes, known as puffs, with amassed DNA. “The dogma was that the amount of DNA couldn’t vary,” explains Amabis, who was a colleague of Pavan’s. Although the structure of DNA was only described in 1953, the idea that the genetic material contained in chromosomes was related to heredity had already existed. “A group from Germany was starting to study polytene chromosomes in salivary glands in Chironomus mosquitoes and described the puffs, but no one knew what they were,” Amabis recalls. “They thought it might have something to do with how genes work.” 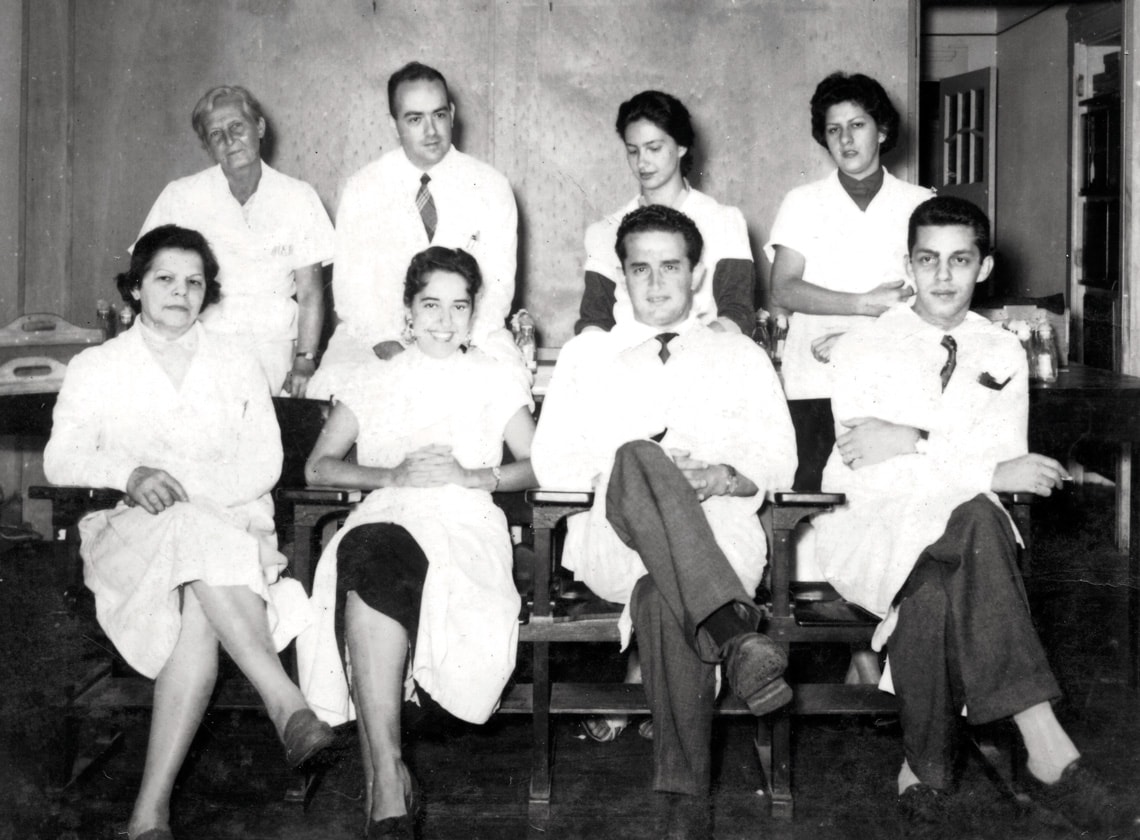 The geneticist (front, middle) with colleagues at the school on Glette Boulevard; Marta Breuer is behind, on the leftComissão Memória Collection of the Genetics Department

Looking at the chromosomes under the microscope, Marta Breuer—a German educated in visual arts at the Bauhaus School—perceived that the pattern of banding changed as they developed, which she interpreted as an increase in DNA. According to Amabis, Pavan concluded that the larvae needed to produce more proteins of certain types and increased the amount of the corresponding genes, which became known as gene amplification. He confronted the critics, who still clung to the invariance of DNA, and overthrew the dogma.

“Pavan probably wouldn’t have noticed the changes in patterns during the bands’ development if not for Marta’s detailed observations,” says Amabis. “His merit was in trusting the data, interpreting it, and then fighting for it.” In Rhynchosciara, polytene chromosomes are also found in intestinal cells and Malpighian tubules (insect excretory organs), in addition to the salivary glands. Comparing the three tissues, Breuer and Pavan showed that chromosomes always have the same genes but they work differently in each part of the body. 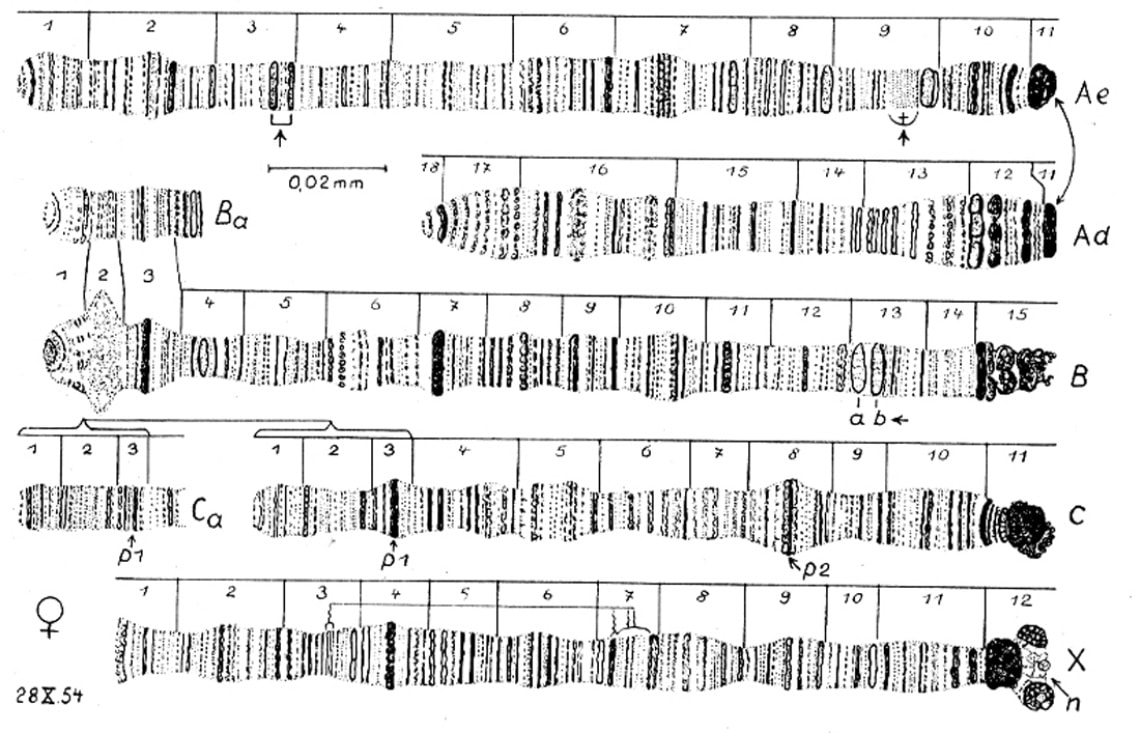 Since then, much has changed in the understanding of how DNA works, but DNA puffs still hold mysteries. “It’s not known which specific sequence signals the DNA to amplify or how it’s organized,” says IB-USP geneticist Eduardo Gorab. He and Amabis intend to continue investigating this issue in the puffs in R. papaveroi. Gorab is also interested in heterochromatin, a tightly condensed part of the DNA he studies in drosophila. “There are interesting issues with papaveroi lamina.”

The lamins were produced by Amabis, who had arrived enthusiastically at the IB-USP lab and gone to his microscope, dissecting the larvae and preparing the material for chromosome analysis—just as Pavan had done almost 70 years earlier. “I played the role of Marta Breuer, assisting,” jokes Gorab. Amabis was his supervisor when he got his master’s degree, defended in 1991 with Pavan on the examining board. “I could see that the gene amplification and the puffs that Marta and Pavan described in R. americana are there,” Amabis says. 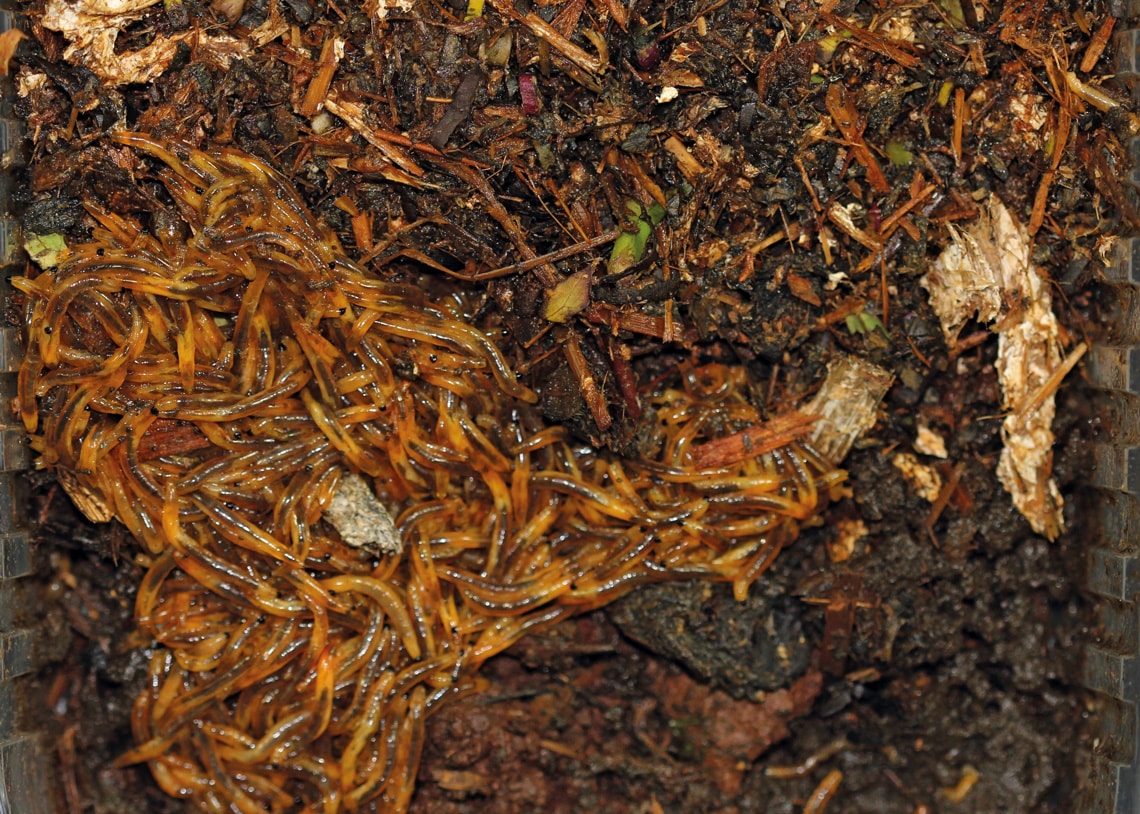 The excitement over finding R. papaveroi goes beyond chromosomes. Breuer described the species in 1971 using only a few adults, but the larvae never reproduced in the lab. Each batch of eggs produces larvae of only one gender, making breeding in captivity difficult. Now, 50 years later, they have returned to the lab.

In Gorab’s lab, the larvae began to secrete the web with which they make their characteristic collective cocoon. But they died before metamorphosis, despite the special menu prepared by Amabis using the remnants of beds for mushroom cultivation, provided by a neighbor, mixed with potato-plant branches. “They ate well for two months.” At the next opportunity, he plans to try raising them in the mountains.

Another species of Rhynchosciara, perhaps not yet officially described, has recently appeared at IB-USP itself. “They eat fermented chicha flowers,” says Gorab, referring to the large tree that grows in front of the department’s building. Although they matured in the laboratory, reproduction was impossible because only females were born. Thus, they could not yet be studied. The researcher is keeping an eye out for the next flowering, in hopes of finding more of the flies. 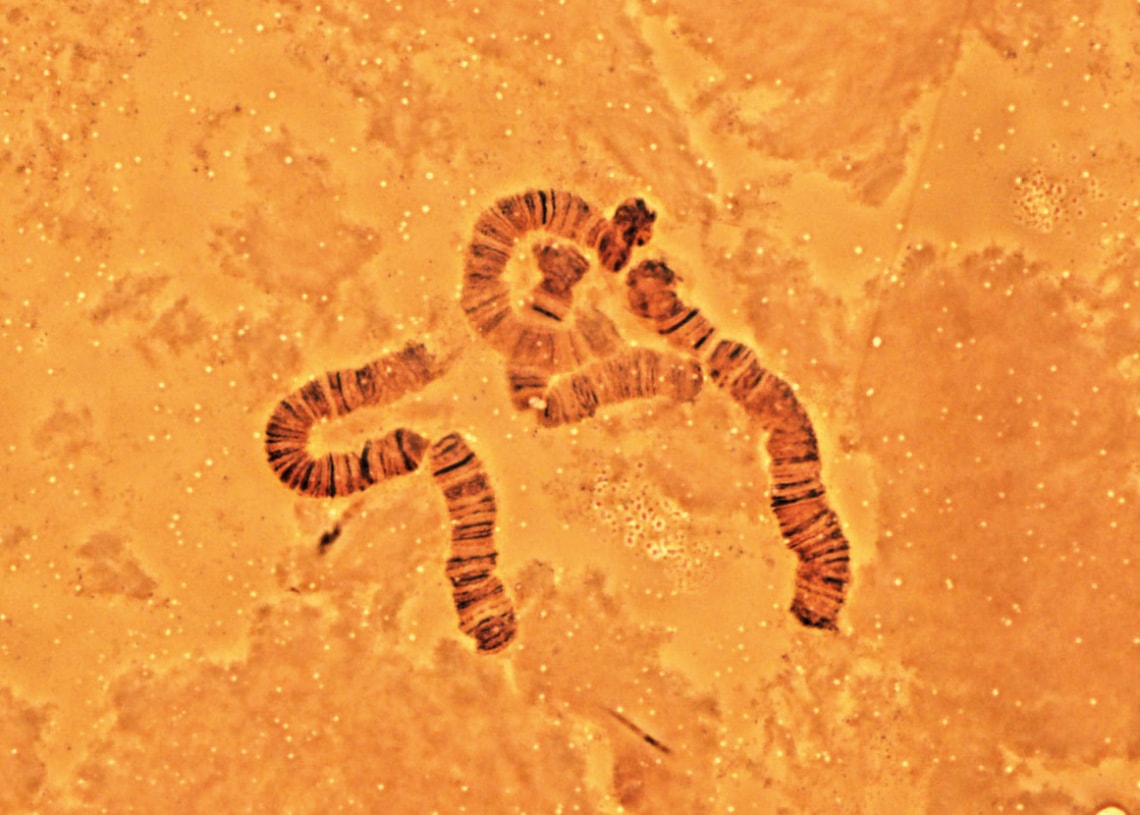 From genetics to communication
Pavan left his mark on science through research on fly DNA, but his influence went much further. He studied natural history in 1939 because he’d been captivated by a film in which actor Paul Muni (1895–1967) played the French chemist Louis Pasteur (1822–1895). While attending a lecture by André Dreyfus, he asked how he could do something similar, and was advised to drop out of the Polytechnic School where he was in the college prep program, and enroll in the recently created natural history program, which at the time worked out of the Glette Boulevard mansion, in downtown São Paulo. The classes were small, and held in a confined space, which fostered strong friendships between colleagues and teachers, says biologist Neuza Guerreiro de Carvalho, who graduated from Glette in 1951 with specialization work coordinated by Pavan. “I measured drosophila wings,” she recalls. “Pavan was very young, and identified with his students,” recalls Carvalho, who is the author of the chapter on natural history in the book A Glette, o palacete e a Universidade de São Paulo [Glette, the mansion, and the University of São Paulo], published in 2014 by the Memory Center of the USP Institute of Psychology. The book was also coordinated by geneticist Carlos Vilela, who heads the Memory Commission of the Department of Genetics at IB-USP, and scanned the old photos seen on these pages.

It was also there that, at the initiative of the Rockefeller Foundation and as a result of negotiations with Dreyfus, the now renowned Russian-American geneticist Theodosius Dobzhansky (1900–1975) arrived, in 1943, to help advance Brazilian genetics. Pavan worked with him in Brazil, and then for a period at his Columbia University lab in New York, from 1945 to 1946. This association helped Pavan develop his research and maintain contact with the Rockefeller Foundation, which continued to fund Brazilian genetics. “For 20 years we had support without needing to discuss money,” Pavan said in the video interview. Joao Morgante recalls that Pavan became the youngest full professor at USP, as a result of Dreyfus’ premature death in 1953. 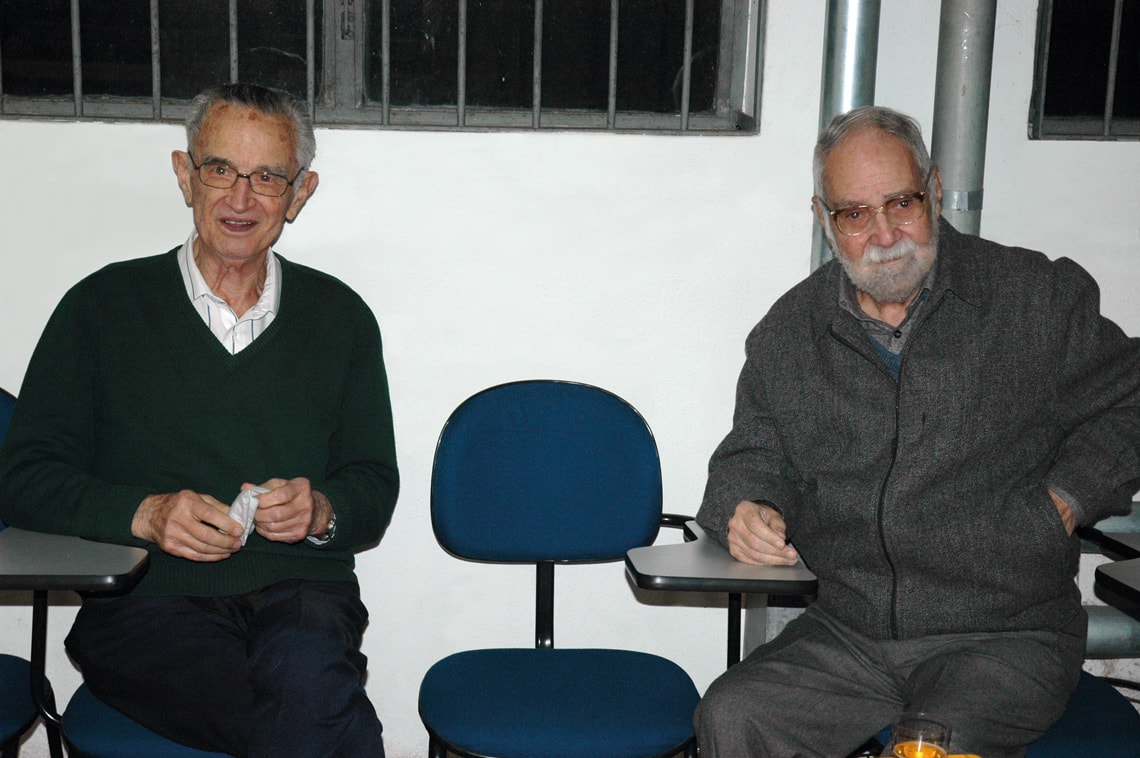 Pavan was one of the founders of the São Paulo State Academy of Sciences, president of the Brazilian Society of Genetics (the first of the “new” generation that followed pioneers like Dreyfus), CEO of FAPESP from 1981 to 1984, and president of the National Council for Scientific and Technological Development (CNPq) between 1986 and 1990. During that time, he created the Science Station, an interactive museum in São Paulo that is no longer in operation. In 1997 he became the coordinator of the José Reis Center for Science Communication at the USP School of Communication and Arts (ECA), initiating a commitment to popularizing science that remained until the end of his life.