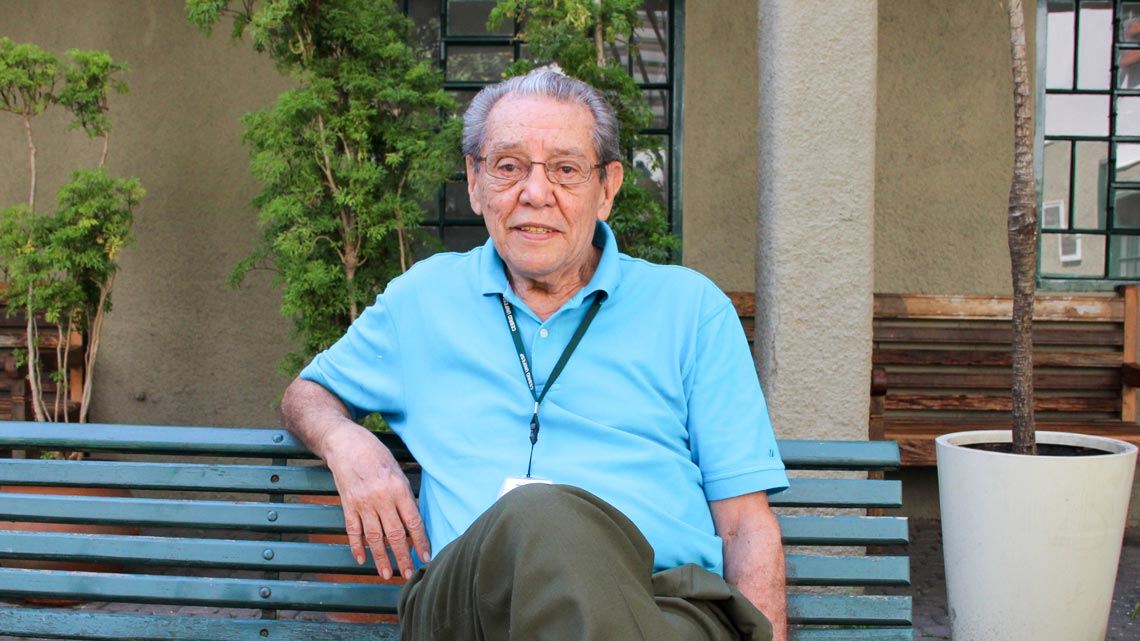 Carlini in 2015 at the São Paulo School of Medicine, where he spent most of his scientific career

At 90, psychopharmacologist Elisaldo Carlini seemed far from done after a lifetime of research, teaching, and socially minded activities. He was in the middle of planning a study on the effect of cannabinoids—Cannabis sativa, or marijuana, compounds—for treating epilepsy. In November 2019, he spoke at the symposium “Therapeutic Cannabis in Brazil: Hits and Misses,” organized by the Brazilian Center of Information on Psychotropic Drugs (CEBRID), where he was scientific director. Founded by Carlini himself and by the Cultive Association, CEBRID instructs families on how to obtain medicine and extract oil from the plant. He still had the dream of establishing a graduate program in herbal medicine at the Diadema campus at the Federal University of São Paulo (UNIFESP). Over the last few months, however, he had a hard time concentrating, shares biochemical pharmacist Solange Nappo, a professor at UNIFESP and Carlini’s wife of 30 years. “Being unable to continue to do science took away the meaning of life for him,” she laments. He died on September 16, from cancer. “Those of us he left behind now have the responsibility to do our best to honor his legacy,” reflects neuroscientist Luiz Eugênio Mello, FAPESP scientific director.

Born in Ribeirão Preto, in the state of São Paulo, Carlini started his career at the São Paulo School of Medicine, now part of the Federal University of São Paulo (UNIFESP), where he became a professor in 1970 and founded the Department of Psychopharmacology. “Psychopharmacology can be defined as the pharmacology of the soul,” explains Mello. He believes it is easy to get lost in this barely palpable area, but that never happened with Carlini—thanks to his solid pharmacology foundation.

In this context, he was a pioneer in studying the active ingredients of marijuana and showed that cannabidiol (CBD)—one such compound—has its own pharmacological effects independent of the effects of tetrahydrocannabinol (THC), responsible for the psychoactive effects. The work of the UNIFESP group complemented that of Israeli biochemist Raphael Mechoulam, from the Hebrew University of Jerusalem, with whom Carlini collaborated.

“Together, we explored the use of cannabinoids for epilepsy, for which there were positive indications for centuries,” shared Mechoulam over email. “In the 1970s, we extracted and purified CBD from hashish supplied by the Israeli police and I sent nearly 400 grams of crystalline CBD to Carlini, who began the first studies on animal models and then on epileptic patients, with extraordinary results.” The drugs that were around at the time were ineffective, and even today some types of epilepsy are resistant to conventional medication. “Today, CBD is an approved drug for certain types of epilepsy in children. If Carlini’s work had been accepted sooner, thousands of patients, especially children, could have been helped.”

“He was innovative, non-conforming, unrelenting,” defines biologist Eliana Rodrigues. “He was also inspiring.” Rodrigues had been working with him for 22 years, since her PhD, when she began a study on medicinal plants used by the Krahô indigenous people, in the state of Tocantins. The goal was to make medicine from the active ingredients of these plants, with help from the pharmaceutical company Aché and funding from FAPESP, generating patents that would benefit the indigenous people. Carlini took representatives from the Krahô to speak with physicist José Fernando Perez, then scientific director of FAPESP, and to the management of Aché. But the project was cancelled due to disagreements between Krahô associates and accusations of biopiracy. “It was a loss for all involved,” concludes Rodrigues. But Carlini did not give up: the use of plants by indigenous communities—or ethnopharmacology—continued to be of great interest to him. “Adversity only encouraged him further,” she shares.

Carlini helped pave the way in ethnobotany and ethnopharmacology in Brazil, according to pharmacologist João Calixto, from the Federal University of Santa Catarina (UFSC). “In 1968, when he organized the 1st Symposium on Medicinal Plants in Brazil, fewer than 20 papers were presented,” he says. It later became a recurring event, taking place every two years. “In 2018, even though he was in a wheelchair, he hosted the 25th edition of the event, in São Paulo. It was the 50th anniversary of the symposium, with over a thousand abstracts of studies.”

Calixto emphasizes Carlini’s impact on drug and narcotics regulation policy in the country. In the 1990s, the psychopharmacologist took the role of Brazilian Secretary of Health Surveillance, with the Ministry of Health, and asked a colleague from UFSC to coordinate the Commission for the Regulation and Registration of Medicines. Later, Carlini promoted the establishment of the Brazilian Health Regulatory Agency (ANVISA), based on the United States Food and Drug Administration (FDA). “Today, ANVISA is a national agency with its own headquarters and a large staff,” says Calixto.

The Santa Catarina researcher also highlights the importance of Carlini in human resources training. “He trained and sent throughout Brazil a large number of people, which helped originate our group here at UFSC,” he reveals. Carlini was considered by colleagues and students to be an inspired teacher—and not just because he spoke of drugs without prejudice. “He always gave us the historical and sociological contexts; it was amazing,” recalls Mello. “He was an unapologetic mind opener.”

According to the neuroscientist, one of Carlini’s essential characteristics was his ability to work on many different topics with the same amount of passion, without restricting himself. “He passionately defended the data and conclusions of his work. He passionately defended the return of democracy. He was always ardently looking for ways to make his work relevant,” describes Mello. “His approach included sociology and anthropology, as well as pharmacology and psychiatry. All without letting his political vision—he was a member of the Workers Party ethics council, decades ago—influence his teaching or scientific work.”

In 2019, Carlini was hospitalized several times, spending nearly half the year in hospital. He managed his cancer pain using cannabis oil, provided by his collaborators. “After he was discharged from hospital, he went straight back to work; that was what motivated him,” says neuroscientist Renato Filev, a postdoctoral researcher with CEBRID. Filev believes the COVID-19 pandemic had the cruel effect of driving Carlini away from what he loved.

“He was intense in the smallest of things, even when eating,” recalls Nappo. She now has an important mission. “I promised him that I would make sure CEBRID moves forward.” Because it was personified by Carlini, there was a perception that it could cease to exist without its founder. In the institutional sphere, in recent years Carlini worked in the small laboratory provided by Eliana Rodrigues in the Diadema campus of UNIFESP, still in the process of being established. While temporarily working in a container, the researcher added flower boxes to liven up the front of the laboratory. He needed to make it a pleasant place.