Hywind wind farm off the coast of Scotland

Brazil has a 7,367-kilometer coastline and a maritime area of 3.5 million square kilometers (km²). This immense region has not yet captured the attention of the country’s renewable energy investors. However, Brazilian researchers are highly interested in the energy potential of waves, tides, and the marine thermal gradient (the difference in water temperature from the surface to the bottom of the ocean), as well as the possibility of harnessing energy from the winds that blow across the sea. “We are generating knowledge and mastering technologies. As is already the case in various other countries, in the future Brazil will also seek energy in offshore areas,” says naval engineer Alexandre Nicolaos Simos of the Department of Naval Architecture and Marine Engineering at the Polytechnic School of the University of São Paulo (Poli-USP).

Simos coordinates a research group focused on developing offshore floating wind turbines. He explains that the majority of the world’s offshore turbines use fixed-foundation systems, meaning their foundations are pillars embedded in the sea floor, and are usually located in shallow waters along coasts. These systems require major construction projects to be carried out at sea, and large vessels capable of drilling piles and hoisting the towers—as tall as 100 meters—that support the wind turbines, which are also called wind generators. The costs of these operations depend on the type of marine bed.

Installing floating turbines is simpler, however, since they are assembled in shipyards and towed to their areas of operation. This also allows them to be taken back to the shipyard in the event of a major breakdown. “The logistics are the same as those used for offshore oil platforms,” Simos observes.

Floating turbines, however, do require platforms, hulls on which they are installed. In most cases, they employ a system similar to that of semisubmersible oil platforms like the Petrobras rigs in the Campos Basin off the coast of Rio de Janeiro, or spar platforms, the vertical cylinders common to the oil industry in the Gulf of Mexico. The hulls are anchored with mooring lines, usually with specialty steel chains attached to anchors set in the seabed.

“They’re expensive structures that currently cost more than fixed-foundation offshore turbines,” Simos notes. For this reason, today they’re an alternative for waters more than 50 meters deep and further offshore. However, as the distance from shore increases, so does the length of the power transmission cables to the power substations on land, which also represents an expense.

The aim of the Poli-USP researchers is to design more economical platforms and anchoring systems, by optimizing hull geometry and using lighter materials for anchoring. Another goal is to create entirely new concepts for platforms and mooring, which would allow the hull to move according to weather conditions and waves without significantly impairing the performance of the turbines. “This is the global frontier for technological development in offshore wind generation. It’s important for Brazil to gain know-how in this type of technology,” says Simos.

There are still very few floating commercial wind farms. The first large-capacity pilot project, Hywind Scotland, was launched in 2017 in Scotland by Statoil (now Equinor), with a capacity of 30 megawatts (MW). In 2020, EDP Renováveis, ENGIE, and Repsol installed the WindFloat Atlantic in Portugal, which has an initial capacity of 25 MW. Simos is betting there will be significant evolution in floating wind generation over the coming decades. One motivation is the power and constancy of offshore winds, another reflects a social issue. “Large wind farms can impact the landscape, fishing, or generate noise, damaging neighboring communities,” the Poli-USP professor points out.

Another incentive should come from the companies that exploit offshore oil. Floating wind turbines could provide an alternative to reduce pollution emissions and increase the electricity supply for offshore oil platforms. There are already research projects being conducted abroad that are seeking to assess the technical and economic feasibility of this type of application. 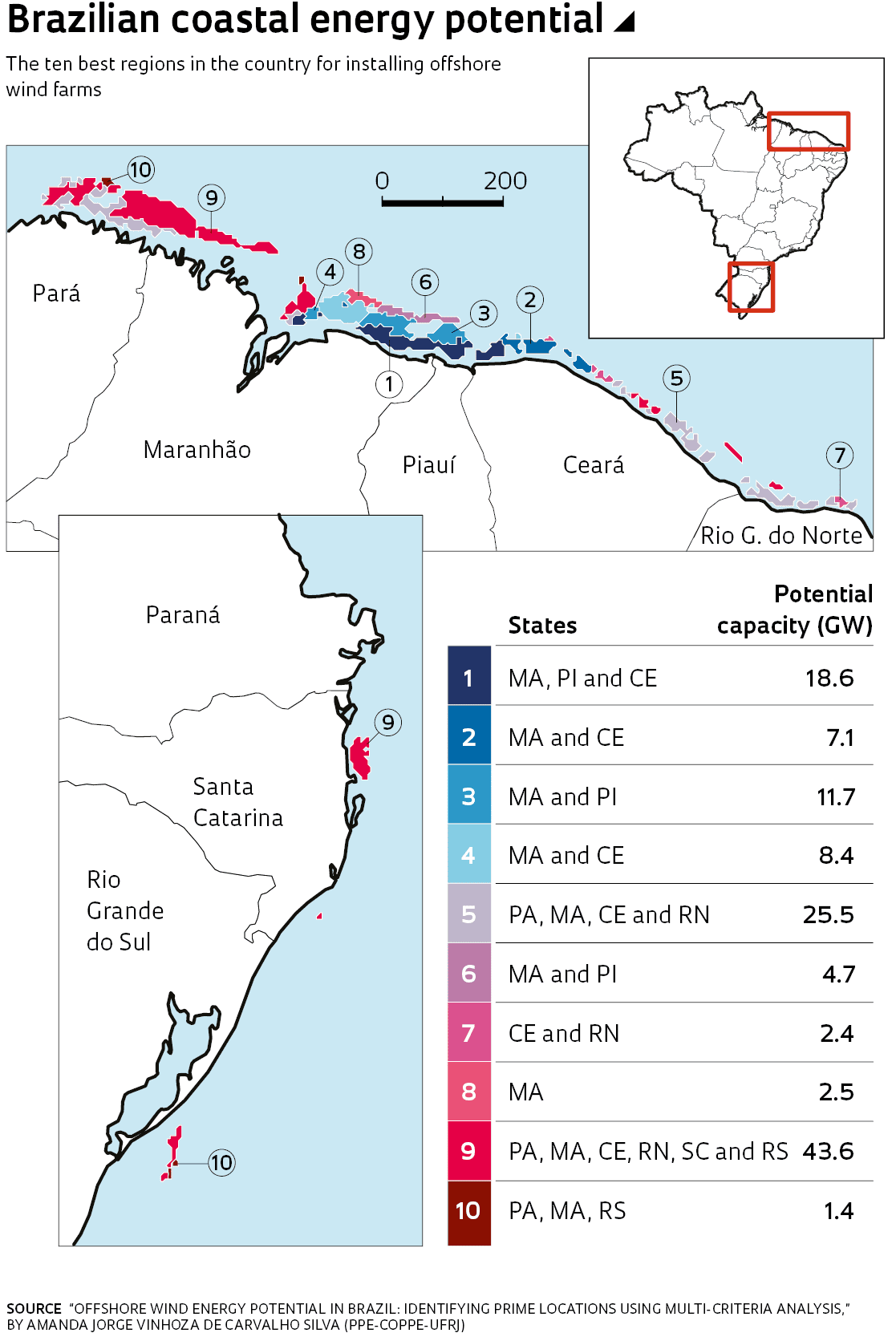 The Global Wind Energy Council’s 2018 report estimates that installed offshore wind power is currently at 23.1 gigawatts (GW), 90% of which is in the UK, Germany, and China. The International Renewable Energy Agency (IRENA) reports that 4.5 GW went into operation in 2018 alone, and underscores that such projects are increasingly distant from the coast, some as far as 90 kilometers offshore.

One trend is an increase in the capacity of offshore turbines. Until 2000, they had an average capacity of 1.6 MW of power. Turbines installed in 2018 had an average capacity of 5.5 MW, with some units commissioned that year attaining 8.8 MW. Some of the principal turbine manufacturers, such as Siemens Gamesa in Spain, the Danish company Vestas, and US multinational GE, are now working on developing turbines with capacities of 10 and 12 MW, to be available by 2022.

There is no difference between offshore and onshore wind turbine technologies, other than power-generating capacity. However, the first onshore turbines with capacities approaching 5 MW were installed only recently (see Pesquisa FAPESP issue no. 275). At sea, turbines can be more powerful because they don’t cause impacts to the sonic environment or landscape, as is the case with equipment installed on land. In addition, the winds are more consistent, since they move freely, without obstacles such as hills, mountains, or built infrastructure.

In January, the Brazilian Power Research Company (EPE), linked to the Ministry of Mines and Energy, released the document “Brazil’s Offshore Wind Generation Roadmap,” which estimates the country has 700 GW of technical potential from offshore wind that could be exploited, taking into account areas with good wind quality and sea depths of up to 50 meters. This energy potential far exceeds the 170.5 GW total installed capacity of the country’s current generating facilities, according to data from the Brazilian Electricity Regulatory Agency (ANEEL). But not all of the technical potential can be used, since there are conflicts of interest with other activities, such as maritime routes, oil pipelines, fishing and recreation areas, and environmental reserves.

Amanda Jorge Vinhoza de Carvalho Silva is an environmental engineer and researcher at the Center for Energy and Environmental Economics (CENERGIA) at the Alberto Luiz Coimbra Institute for Graduate Studies and Research in Engineering at the Federal University of Rio de Janeiro (COPPE-UFRJ). She took the above-mentioned factors, and others, into consideration in a study, including the proximity of ports where ships would leave from in order to install and maintain the wind farms, and the logistics of connecting with onshore power substations. In her master’s dissertation “Offshore wind energy potential in Brazil: Identifying prime locations using multi-criteria analysis,” defended last year, Vinhoza revealed the ten most suitable areas in the country for installing offshore wind farms (see infographic). Together, these regions total almost 42,000 km², concentrated in Pará and other northeastern states and in southern Brazil, and have a power generation potential of about 126 GW. “It’s equivalent to nine Itaipu plants, which has a capacity of 14 GW,” she observes.

For Roberto Schaeffer, a professor in the COPPE Energy Planning program, and Vinhoza’s thesis advisor, the mapping done by his student is important for guiding future investment, but he doesn’t see these projects being viable in the short term. “In COPPE’s projections for the 2050 electrical energy grid, we did not foresee an economic opportunity for offshore generation in Brazil,” he says.

Schaeffer points out that Brazil has an energy grid with more than 80% renewable sources. Therefore, it does not undergo the same pressure to replace fossil-fuel sources that currently occurs in Europe and China. Brazil also has great onshore wind potential, around 500 GW, of which only 15 GW are currently being exploited. “Offshore investments only occur when opportunities on land are exhausted, or when there’s a forceful societal rejection regarding the installation of turbines close to communities. None of these situations are occurring in Brazil today,” he emphasizes.

A purely economic analysis demonstrates the low competitiveness of offshore wind generation today. Amanda Vinhoza’s survey, based on 2018 IRENA data and using a calculation that takes into account the life cycles of wind turbines, indicates that the global average for levelized cost of offshore wind energy is US$130 per MWh, while the average cost of onshore generation is US$60 per MWh.

In Brazil, another obstacle is the lack of regulation of offshore power complexes. In 2018, the Brazilian Senate approved Bill No. 484/2017, which creates a concessions system for energy generation using wind and solar sources in maritime areas. The bill is still pending in Brazil’s House of Representatives. The Brazilian Institute for the Environment and Renewable Natural Resources (IBAMA) is also lacking a terms-of-reference model for the environmental licensing of offshore plants. Drafting the terms-of-reference document that will guide future environmental impact studies began in January this year.

Developing a system for converting sea waves into electricity is a priority for the Renewable Ocean Energy Group at the COPPE-UFRJ Underwater Technology Laboratory. In 2010, a team of researchers coordinated by Segen Estefen installed the first wave-power plant in the Americas in Porto do Pecém, Ceará. The project, patented by COPPE, used a structure supported on land, which extended over the breakwater, and a hyperbaric chamber to generate pressure and move the power-generating turbine (see Pesquisa FAPESP issue no. 113).

The pilot plant remained in operation for four years. “We proved the technical viability, but not the economic viability,” says Estefen. Now a new, more economical technology is being prepared for testing in the vicinity of Ilha Rasa, about ten kilometers offshore from Copacabana beach, in Rio de Janeiro.

The new wave converter will consist of an oscillating buoy with a cylindrical shape and a conical end 4.5 meters in diameter, with its vertical movements coupled to a locking control system. The movement of the buoy feeds the electric generator. The structure is supported by four columns on a concrete base set at a depth of 20 meters. The prototype will have an installed power of 80 kilowatts.

Two other technologies are on the horizon for Coppe researchers. One of them will take advantage of tides. The system will require the construction of a dam with locks, and hydraulic turbines. The reservoir fills at high tide and empties at low tide, so the flow of tidewater drives the turbines. The estuary of the Bacanga River, in Maranhão, where a dam already exists, is one suitable place for installing the pilot tidal power plant. Another promising region, according to the Maranhão government, is Turiaçu bay, with a potential for a 3.4-gigawatt plant.

The Ocean Thermal Energy Conversion System (known as OTEC) pumps water from the sea bottom to a heat exchanger close to the surface in order to generate steam to drive the turbines. “Electricity from ocean thermal energy is in an experimental phase worldwide, but it’s believed that it will be well represented in the energy grid over the coming decades,” Estefen says.