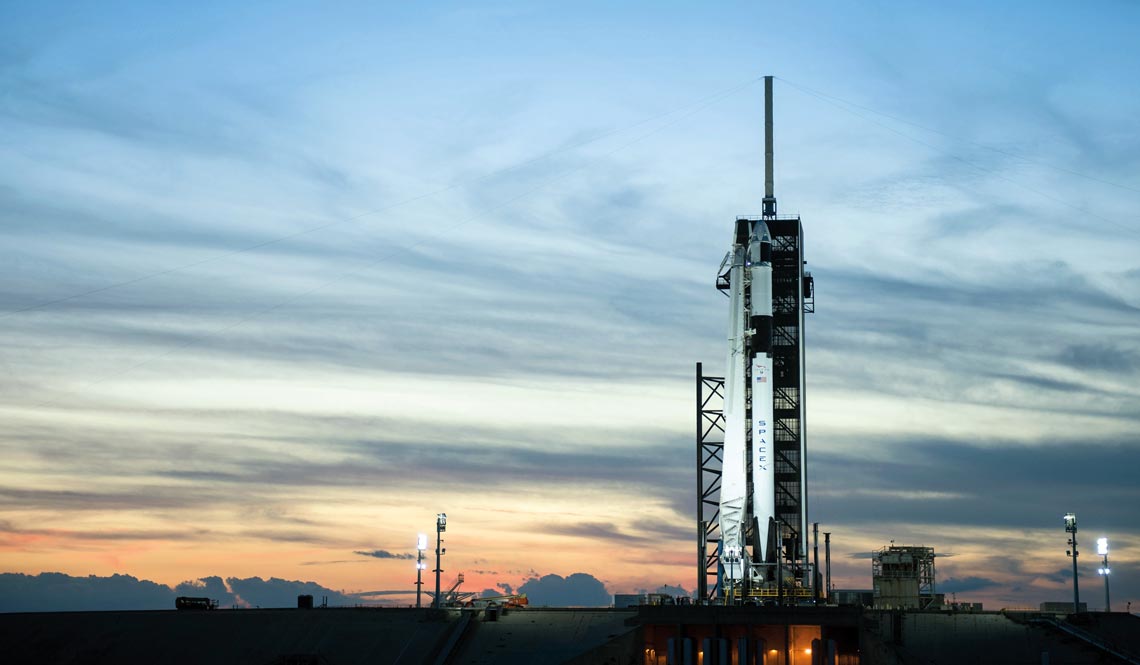 The Falcon 9 rocket, ready to go into space, with the Crew Dragon capsule on top

It was 2:49 a.m. on March 2 in Florida, United States, when the engines were ignited on the Falcon 9 rocket, produced by SpaceX, the company of billionaire and space travel enthusiast Elon Musk. Leaving from the Kennedy Space Center, the first projected capsule developed by a private company to take humans into space took its inaugural test flight. Manufactured under the supervision of NASA, the North American Space Agency, the Crew Dragon can carry seven people. On that Saturday, it only carried a mannequin wearing the company’s space suit with sensors to measure the acceleration to which an astronaut would be subjected in flight.

Three minutes after launch, the Falcon 9 was already at an altitude of 90 kilometers (km) and left behind its first stage, which would land in order to be reused in another mission. The engine of the second stage pushed the capsule to an altitude of 200 km and close to 27,000 km per hour. At this moment, 10 minutes into the flight, a stuffed Earth orb floated beside the mannequin, which was nicknamed Ripley in tribute to Sigourney Weaver’s character in the film Alien (1979). The Crew Dragon was in space. The next day the capsule would connect automatically to the International Space Station (ISS), before returning to Earth on March 8 and being recovered from the Atlantic, close to the Florida coast. After being rebuilt, it will likely be used in another test flight to assess the safety mechanisms in the case of launch failure. After a flight, the Crew Dragon capsules can be used to transport cargo.

The Crew Dragon test is an unprecedented and symbolic feat for two reasons. It shows that a commercial company has reached technological maturity to carry out flights to Earth’s orbit with efficiency, safety, and lower cost than traditional programs of government space agencies. It also indicates that the United States is close to recovering the autonomy to independently take human beings into space. Today, the country depends on the Soyuz Russian rockets.

“Today’s successful launch marks a new chapter in American excellence, leaving us closer, once again, to launching American astronauts in American rockets that leave from American soil,” writes James Bridenstine, director of NASA, on Twitter after the launch. Later, in a media interview, he was more conciliatory. “We want to be sure that we maintain our partnership with Russia, which has been strong since the Apollo-Soyuz era, but we also want to ensure that we have our own capacity to go to the International Space Station and back.” NASA’s partnership with SpaceX is part of the New Space movement, a business model where the space agency buys products and services from private companies.

It is not the first time that a SpaceX capsule docks on the ISS. From 2012 to 2018, a simpler version—the Dragon, destined for cargo transport—took 15 flights and docked 14 times on the station, a laboratory located at an altitude that varies between 330 km and 435 km, on the planet’s lower orbit and which is essential for microgravity experiments and for the study of the effects of long periods in space on the human body. Its construction and maintenance cost US$150 billion—one third in trips to refuel and change crews. 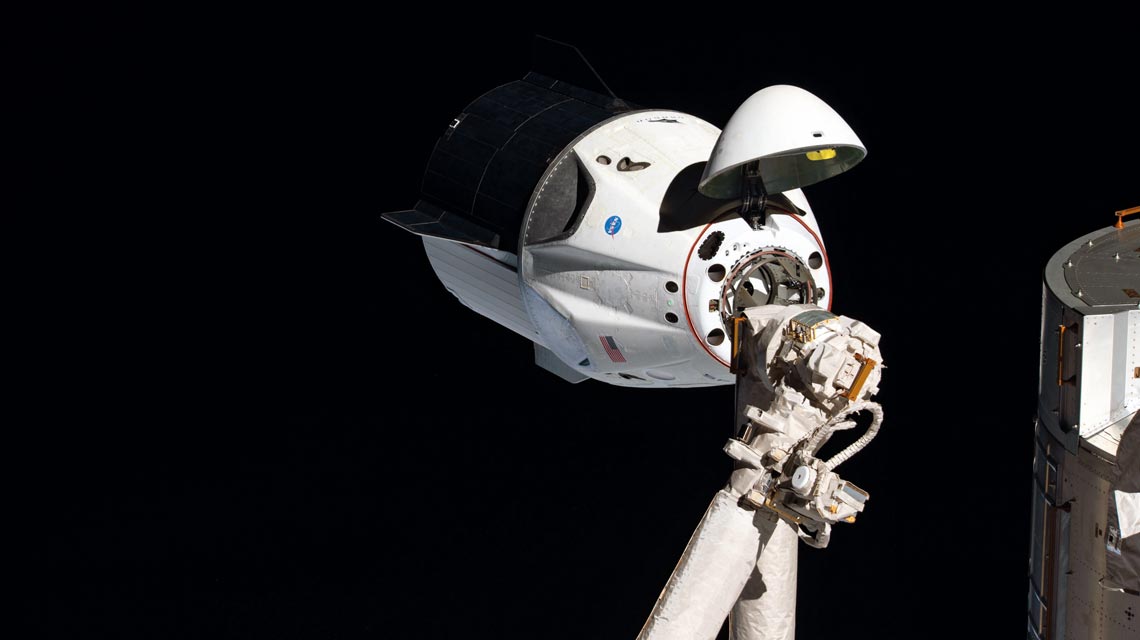 Arrival of the capsule at the International Space StationNASA

In order to reduce costs, in 2008 NASA contracted the flights of SpaceX and a competing joint venture, United Launch Alliance (ULA), comprised of Boeing and Lockheed Martin, manufacturers of commercial and military airplanes, satellites, and missiles. The first 12 flights of SpaceX cost US$1.6 billion, funds that helped divert the bankruptcy of Musk’s space company. He is also the founder of electric car manufacturer Tesla.

There is a significant difference between transporting food and equipment versus astronauts. In the latter case, the requirements for safety and environmental cabin control (such as air pressure and temperature) are much more rigid. Rocket acceleration can take the crew to the limit of what the human body can endure. In the case of the Falcon 9, the pull is equivalent to five Boeing 747s with engines at full force, and a capacity to put 22.8 tons into the Earth’s lower orbit (up to an altitude of 2,000 km). Furthermore, control and propulsion mechanisms must be extremely reliable, with redundant systems.

“To make an autonomous transport module for astronauts to arrive at the ISS is a grand feat,” confirms aeronautic infrastructure engineer Carlos Augusto Teixeira de Moura, president of the Brazilian Space Agency (AEB). “Going from the level of cargo transport to that of crew transport requires overcoming a series of technical challenges, which makes the project extremely expensive,” he says.

For the past eight years, the North Americans have relied on the Russians to get to the ISS at an ever-increasing cost (US$80 million per seat). From 1981 to 2011, NASA astronauts arrived there via space buses, which are more comfortable, sophisticated, and above all, expensive. They could take up to seven people and were more versatile—they could bring satellites back to Earth or be used during repairs to the Hubble telescope. Out of 135 flights, there were two accidents: the explosion of the Challenger in 1986, and of the Columbia in 2003. Each flight cost between US$450 million and US$1.5 billion. Over the years, they have consumed the majority of the NASA budget.

“The space buses were like a Ferrari,” notes Oswaldo Loureda, aerospace engineering PhD and professor at the Federal University for Latin American Integration (UNILA), in Foz do Iguaçu, Paraná. “Their engines were a work of engineering art, but each one cost close to US$1 billion, and after each flight, required adjustments and repairs that could last for one year,” says Loureda, who also founded and is the technical director for Acrux Aerospace Technologies, a Brazilian startup specialized in the production of small rockets, drones, and structures for microsatellites. 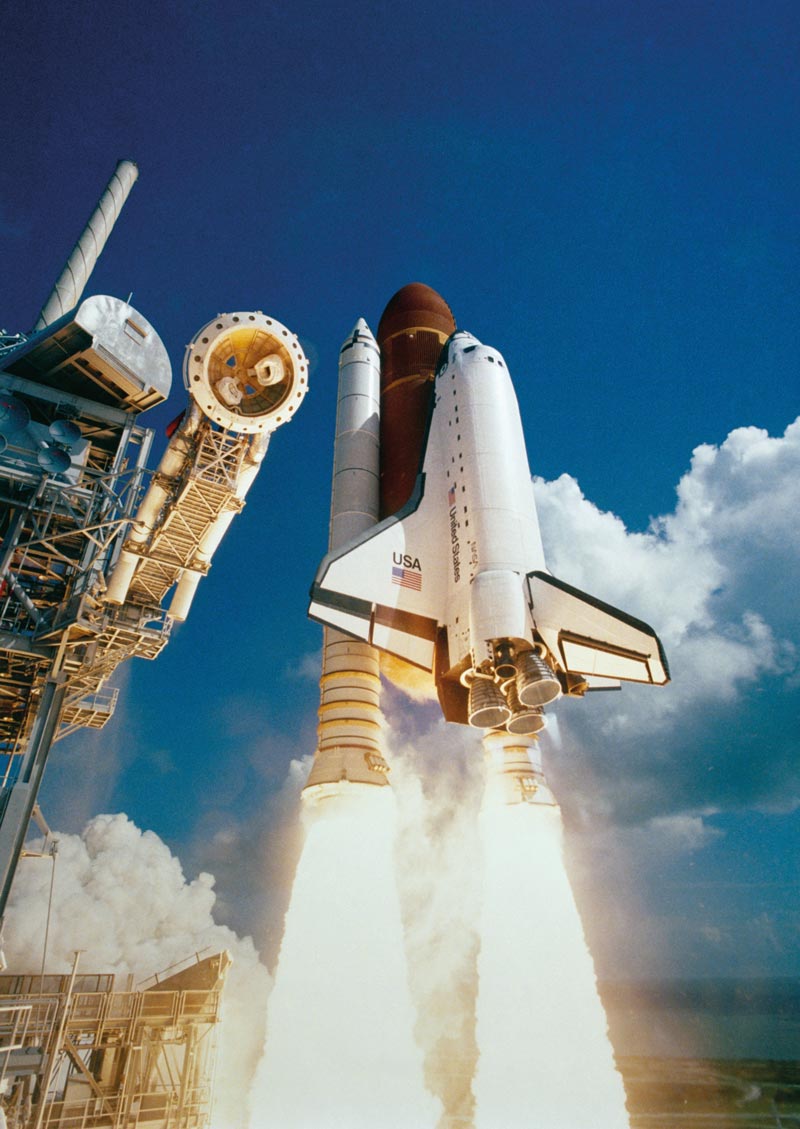 The Russians had their own space bus, Buran, which only made one flight. The price led them to opt for the Soyuz rockets, which are robust, reliable, and cheap—the flight costs US$50 million. Using different versions, the Soyuz has been to space 1,700 times since 1966, with very few accidents.

“The Soyuz spacecraft have never prioritized the comfort of travelers,” says aerospace engineer Lucas Fonseca. As a former member of the Rosetta mission of the European Space Agency (ESA), Fonseca leads Airvantis, an aerospace technology company focused on the production of microsatellites and supporters of the Brazilian mission Garatéa-L, which plans to take one of them to the moon’s orbit. “In the Soyuz, the crew is subjected to accelerations close to peak human tolerance.”

With the Crew Dragon, SpaceX promises more comfort at a much lower cost. In March, while the capsule was in space, Canadian astronaut David Saint-Jacques, the first ISS crewmember to visit it, described it as “a first-class experience.”

“The Crew Dragon flight to the ISS served as a test to validate the technology and competitive model,” confirms Brazilian engineer and entrepreneur Sidney Nakahodo, cofounder and executive director of the New York Space Alliance, a startup based in the United States and which funds the development of space startups and works to facilitate the transfer of NASA technology to companies. “The event is a milestone in the space era. SpaceX showed that it is capable of serving the needs of NASA and that such complex problems can have solutions offered by the market,” he confirms.

Another two flights of the Crew Dragon are planned in the near future. The first, which is the capsule, will not have a crew and will simulate aborting a mission after launch. If the safety systems function as expected, astronauts Robert Behnken and Douglas Hurley will use it to go to the ISS in July. Also this year, Boeing’s CST-100 Starliner capsule for astronaut transport, which is designed to be reusable, will likely make its first flight without a crew. 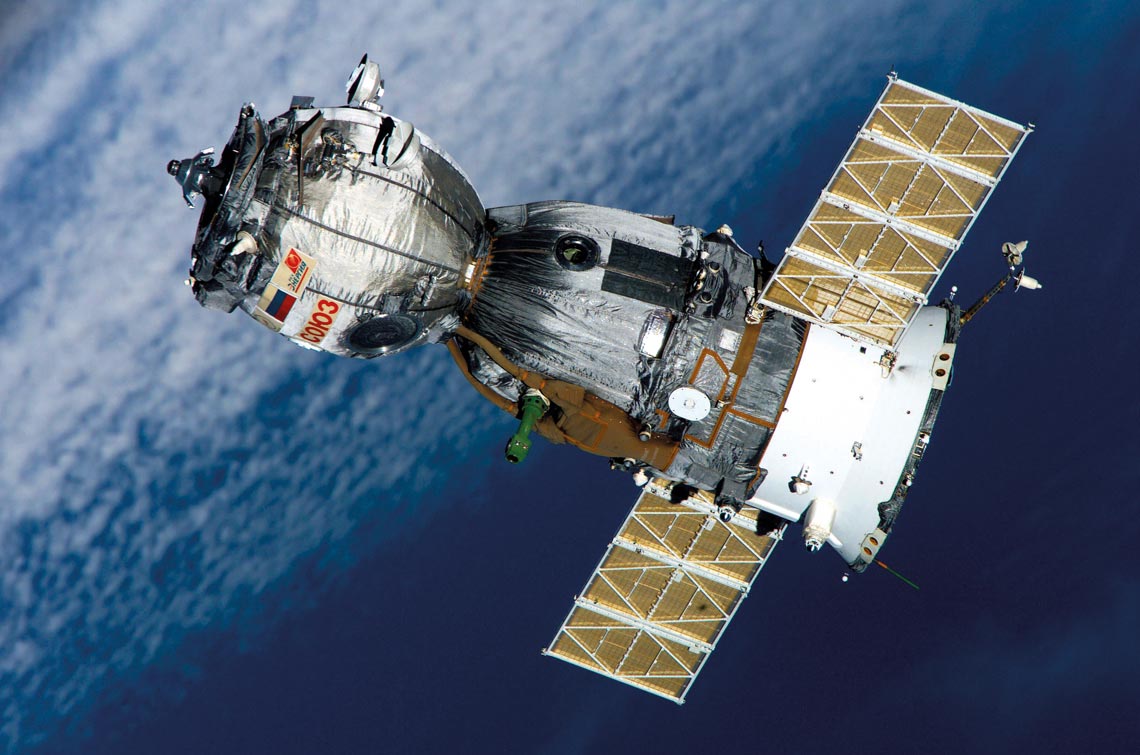 The partnerships with SpaceX and Boeing are part of the Commercial Crew program at NASA. Launched a decade ago, it aims to reduce project costs by buying products developed and tested by new companies in the aerospace sector. In this program, the agency identifies a need to be met—for example, the construction of a transport module—then determines the characteristics of the product and, in general, a spending limit. Execution is the responsibility of one or more companies that won the bid and which select the manufacturing technology and the business model.

This is a different strategy than that pursued by the space agencies since the Cold War, when NASA and the space agency of the former Soviet Union, Rosaviakosmos (today Roscosmos), did not spare efforts and resources. In the United States, NASA planned a rocket or capsule from beginning to end and contracted a company to build it, using the agency’s infrastructure and technicians. In this system, Old Space did not have a spending limit. With a cost-plus pricing policy, NASA paid for the development costs and a percentage of profit.

The principles of New Space appeared in the 1970s and began to take shape in the last two decades with the creation of companies such as Blue Origin, of multibillionaire Jeff Bezos, owner of Amazon; SpaceX, of Elon Musk; and Virgin Galactic, of British magnate Richard Branson. “Essentially, these are lean management technology companies that put forward their own sustainable business models based on activities of space infrastructure. They do not depend on government opportunities, but they could have the government as a client,” explains Fonseca of Airvantis. These companies were born with the intention of reducing the cost of accessing space, and there are now close to 500 of them throughout the world, including a few in Brazil, such as Airvantis and Acrux.

“There is a disruptive, fast movement happening in the aerospace industry,” adds Loureda of Acrux. If this moves ahead, the new model could complicate things for the agencies that operate with the old method. For some specialists, it would be a business opportunity for countries that do not have a history in the area of space exploration. “This movement allows for the private sector to be involved in project development. In principle, this sector does not know the cost of project development, which was always the responsibility of government agencies,” notes Luiz Gylvan Meira Filho, president of the AEB from 1994 to 2001. “This could stimulate Brazilian companies to work in areas that are not of interest to local government bodies.”

Moura, of the AEB, also sees an opportunity with New Space. In Brazil, there are aerospace engineering courses and an infrastructure that is found in few countries, such as the laboratory for satellite construction at the National Institute for Space Research (INPE) and the Alcântara Launch Center in Maranhão. If the Brazilian Congress, and that of the United States, pass an accord of technological safeguards signed in March, Alcântara could attract the interest of countries that want to put satellites in orbit at a lower cost and, for example, promote the development of companies that work to support launches. “Brazil is a large buyer of space services. We have to take advantage of the packaging of New Space so that we can become suppliers,” he confirms.

Brazilian companies could even work to supply satellite equipment, small launchers, and microgravity experiments. In order for this to occur, recalls Nakahodo, the challenge for Brazil is creating a favorable environment for entrepreneurs. Loureda, of Acrux, notes: “It is time for the country to decide if it will be an actor or a spectator.”