For a number of years videos have been circulating the internet showing an intriguing experiment, which has now received a satisfactory physical explanation. In the video, a plastic bottle with a bit of liquid nitrogen transforms a barrel full of ping-pong balls into a flashy cannon. While a liquid at temperatures below -196.15 degrees Celsius, nitrogen quickly turns to gas at room temperature, undergoing an explosive expansion that shoots thousands of balls into the air. The experiment has already been done on TV shows, and briefly created a scene in a campus building at Plymouth University in England, when chemist Roy Lowry performed it in 2015. The curious thing is that at the moment of the explosion, it’s not only the balls that go flying. The barrel also comes off the ground, sometimes rising as high as one meter, when what was expected was that it would remain stationary or ricochet.

The apparently simple experiment has been given an explanation from Brazilian and German researchers. In an article published in April in the American Journal of Physics, physicists Jason Gallas, from Rio Grande do Sul and Eric Parteli, from Pernambuco, with Santa Catarina engineer Daniel Nasato, in partnership with Germans Thorsten Pöschel and Patric Müller, showed that it is the friction between the balls themselves and between the balls and the barrel that makes the barrel fly.

Various attempts at an explanation had already come up on internet discussion forums. Some suggested that the explosion was causing the bottom of the barrel to deform and press into the ground, which in turn would push the barrel upwards. Others proposed that the group of balls, when ejected, formed a partial vacuum that was dragging the barrel upwards. The third explanation was more complicated. The nitrogen bottle was placed floating in water. The blast was throwing the balls up while pressing the water against the bottom and walls of the tub. As it retreated, the water would then pull the barrel up, making it jump.

These interpretations would explain the barrel’s rise under certain conditions, but, according to the researchers, were not relevant to the phenomenon observed. The barrel took off even when it was made of metal and had a rigid bottom. The group also saw no reason the explosion would create a vacuum, since the displaced air is quickly filled with nitrogen. If the vacuum were relevant, the barrel would still come off the ground even without the balls present, which was not the case. The third explanation, to be valid, would require that the barrel be slightly off the ground initially or that the floor be of an elastic material, whereas in many experiments the barrel is on a hard, dry floor. “We were looking for a general explanation,” says Nasato, now a researcher at the Technical University of Munich, Germany.

The group started thinking about it in 2011, when Gallas first saw the video. He arrived at the University of Erlangen-Nuremberg, Germany, for a term as a visiting professor and brought the subject to an informal discussion of physics subjects, the “kaffee seminar.” Thorsten Pöschel, director of the university’s Institute for Multiscale Simulation, found the problem interesting. Like Gallas, he specializes in the behavior of granular materials (grains of sand, food, and ores) and suspected that the barrel would bounce as a result of a known effect in his field: clogging. 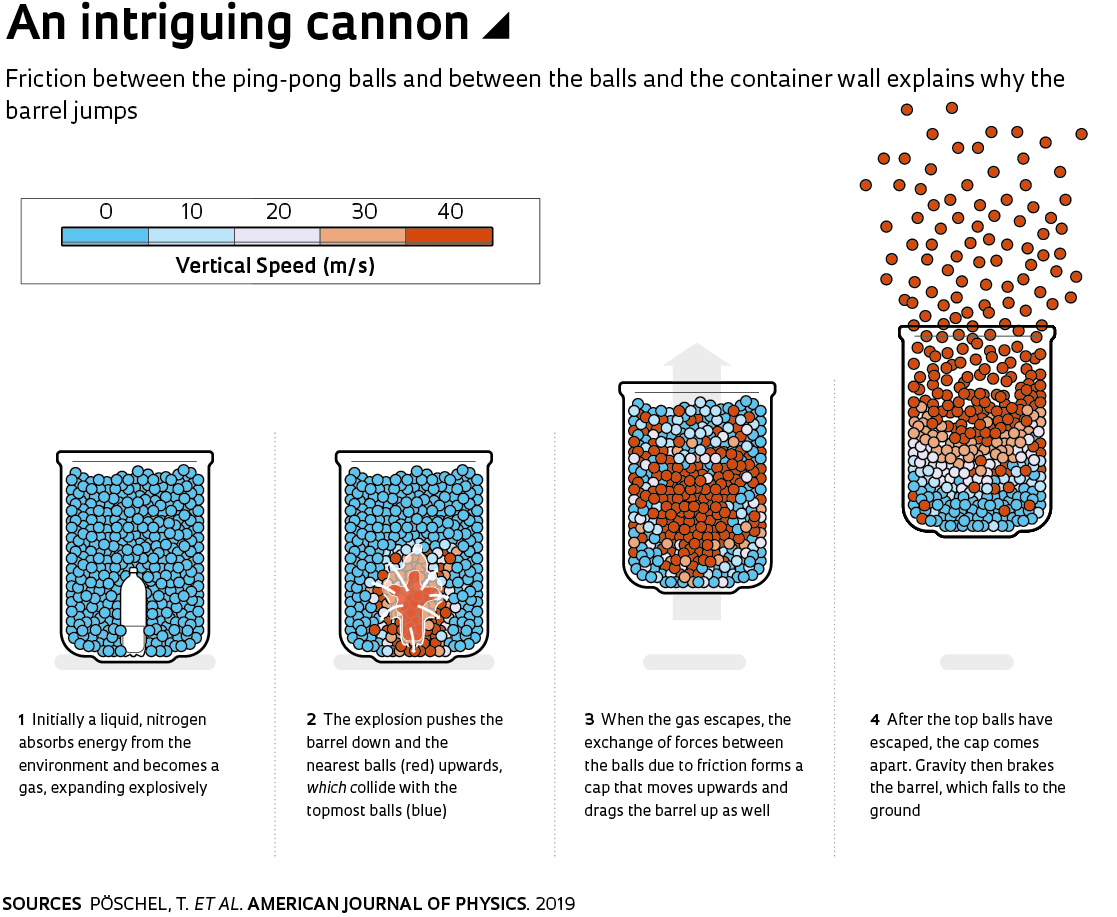 Since it wasn’t possible to measure all the forces at work in the experiment, they went to computational simulations. Parteli, now at the University of Cologne, Germany, did the first simulations, confirming their initial supposition. However, simulations that duplicated the parameters of the Plymouth experiment (the number of balls, with their dimensions and properties, as well as those of the barrel) had to wait until Nasato’s arrival at Erlangen for a postdoctoral fellowship. Nasato then obtained realistic results that correctly reproduced the height the barrel achieved.

At the moment of the explosion, the balls nearest the nitrogen bottle are ejected at high speed and collide with the balls in the upper layers, which are pushed upwards and clog the passageway. The exchange of forces between the balls due to friction forms what physicists call chains of force and causes them to behave, for a fraction of a second, as a single rigid object—like a large cork—moving at high speed. The friction between this cap and the barrel wall drags it upward until the upper balls escape and let the others pass as well.

Yet this by itself doesn’t explain the barrel’s upward movement. It also occurs because the acceleration of the balls moving upward and the exchange of forces between the balls and the barrel wall occur at different moments. Right after the explosion, the expanding nitrogen equally pushes the balls upward and the bottom of the barrel downward at the same time, which would normally keep it on the ground. However, after the gas escapes and stops exerting its force, the balls forming the cap continue to move upward due to inertia. It is at this point that the friction between the balls and the barrel wall drags the barrel upwards. After rising for a short time, gravity slows the barrel down, which then falls to the ground.

For Allbens Atman, a physicist at the Federal Center for Technological Education of Minas Gerais (CEFET-MG) and a specialist in granular media, the explanation is surprising for two reasons. First, by showing that the system formed by the barrel, balls, and nitrogen bottle is not isolated from the environment, as some might think. “The surrounding ambient temperature, which is well above that of liquid nitrogen, provides the energy that generates the explosion,” he explains. “This negates the apparent paradox, which at first leads us to wonder where the force that lifts the barrel comes from.” Second, because friction is necessary, and sufficient, to drag the barrel upwards. In the simulations, after removing the friction between the balls or between them and the barrel wall, the barrel would not leave the floor.

“Understanding the role of friction in the interaction of granular materials can lead to industrial applications,” Nasato observes. In the pharmaceutical field, it could help to design better pneumatic conveying systems (pressurized airflow in tubes) for materials that must be kept sterile, reducing the risk of clogging and equipment breakage. It can also assist in calculating optimum feed speeds for ore refinery blast furnaces, and in the production of ultrafine powders used for producing new materials.