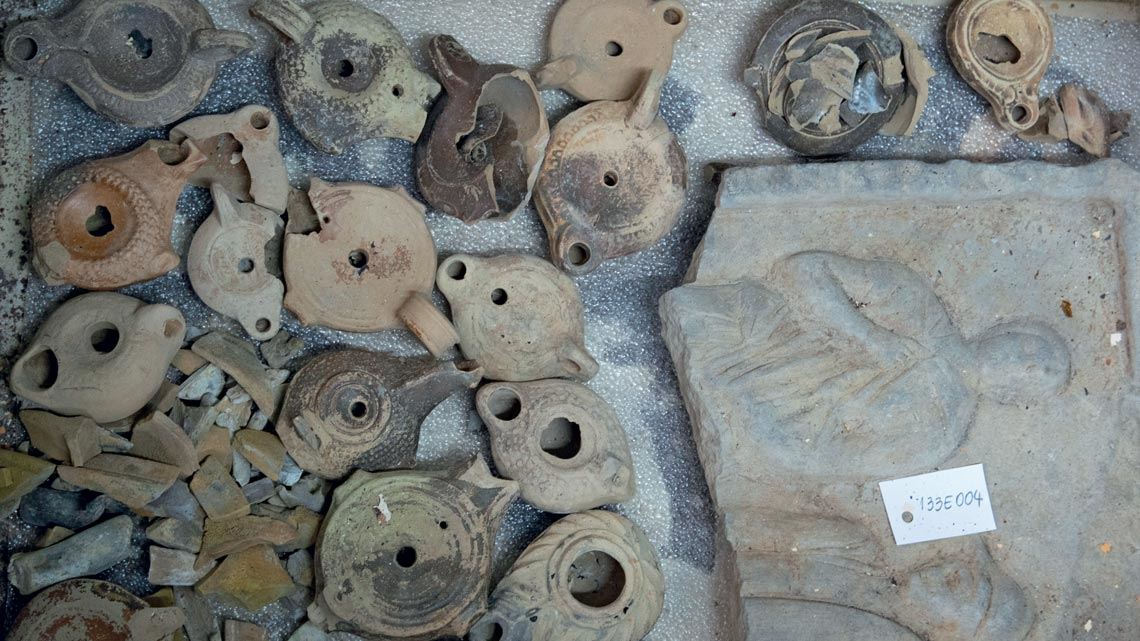 The search for remnants of artifacts in the rubble of the Brazilian National Museum, which burned down on September 2, 2018, has been suspended since March due to the COVID-19 pandemic. The salvage operation among the ruins of Paço de São Cristóvão, the palace that the institution linked to the Federal University of Rio de Janeiro (UFRJ) used to call home, is scheduled to resume at the beginning of next year, but only if the rate of contagion falls. Museum management estimates that it has recovered 90% of the salvageable material and that another six weeks are needed to complete this phase. According to a report released by the Federal Police in April last year, the fire was started by an electrical overload in an air conditioning unit.

Now enclosed by wooden sidings, the palace is almost deserted, with the exception of security guards and occasional inspections by members of the museum’s board. “The pandemic didn’t have a great impact on the reconstruction because we are still in the design phase,” explains paleontologist Alexander Kellner, director of the institution. The goal is to reopen the museum in 2025, with the inside of the palace completely modernized. Due to the bicentennial of Brazil’s independence and the historical importance of the construction at Quinta da Boa Vista, which before hosting the museum, was the official residence of the imperial family in the nineteenth century, there is a chance that the museum will partially reopen in 2022. Also scheduled for the bicentenary year is the opening of a National Museum mini educational center, located outside the palace grounds and designed for school students. The mini-center will be based at the new National Museum/UFRJ Research and Teaching campus, a 44,000-square-meter area adjacent to the Quinta da Boa Vista park that will include administrative offices, academic buildings, and laboratories for handling artifacts stored in liquids, as well as other research labs and buildings to be used for museum collection maintenance. Until the fire, most of these activities, in addition to public exhibitions, took place at the São Cristóvão Palace (see Pesquisa FAPESP’s articles on the impacts of the fire in issue no. 272).

The search for funding to rebuild the museum and the new campus is ongoing. Of the R$372 million it needs, the museum has so far obtained R$162 million, less than 50% of the total. “We don’t even have enough for the first stage of reopening yet,” says Kellner. The museum will be physically restored and rebuilt through the Museu Nacional Vive project, a partnership involving UFRJ, the United Nations Educational, Scientific, and Cultural Organization (UNESCO), and the Vale Foundation.

The plans for restoring the facade and roof are ready and have been approved by the National Institute for Historical and Artistic Heritage (IPHAN), a legal requirement. “Paço de São Cristóvão and Quinta da Boa Vista were listed in 1938,” explains architect Maria Paula von Biene, from the National Museum’s Technical Office, who is working on various stages of the palace’s reconstruction with the challenge of ensuring it maintains its rich history. “The proposal for the facades, which actually resisted the fire and still stand strong, is to restore them and rescue the architectural identity of the palace and its relationship with Quinta da Boa Vista.”

At a cost of around R$50 million, this phase will be funded by the private sector, in addition to approximately R$ 20 million from the Legislative Assembly of Rio de Janeiro (ALERJ). According to the schedule shared by the museum’s board of directors, work on architectural designs, the gardens, and the museography will begin by the end of 2020, as will the restoration of ornaments and decorative elements from the palace and the Jardim das Princesas garden. There are also plans to renovate and expand the museum’s Central Library, which is located in the botanical garden adjacent to the palace and was not affected by the fire.

Frescoes from Pompeii before the fire...
Romulo and Valentino Fialdini

On September 2 of this year, the second anniversary of the tragedy, a team of researchers from the museum shared some good news: they have managed to recover roughly 30% of the Imperatriz Teresa Cristina collection, comprised of 700 artifacts and frescoes from the ancient Italian cities of Pompeii and Herculaneum between the seventh century BC and the third century AD. The rescued pieces include four frescoes from the temple of Isis in Pompeii. “The reserve archeology collection had six cabinets of items from the Imperatriz Teresa Cristina collection, and they remained standing and closed during the fire. We were able to take the cabinets apart shelf by shelf,” says National Museum archeologist Ângela Rabello. Almost 300 pieces and fragments from the Egyptian collection were also recovered, which originally had 700 funerary objects. Sculptures of Bes, the god who protects children, a noblewoman (now missing the cone on her head for which she was renowned), and various mortuary figurines were recovered from the remains of the fire. “The mummies and sarcophagi were damaged, but our Egyptian collection remains the largest in Latin America,” says Rabello.

The work of saving these pieces includes reassembling the fragments like a puzzle. Chemist Neuvânia Ghetti, head of the museum’s recovery and conservation team, explains that the procedures they used were challenging because of the specific nature of the collection. “Every artifact, every box, every drawer that was recovered led to new questions and challenges due to the highly specific behavior of each material,” explains Ghetti. According to her, the museum staff need to understand how each object has interacted with the environment caused by high temperatures, luminosity, debris impact, and contact with water. In one of the frescoes from Pompeii, featuring a dragon and two dolphins, there was a visible change in the coloring: “Everything was whitened, the pigment faded as a result of the high energy it was subjected to, and is now stabilizing in new ways,” says the chemist.

The fire meant academic departments that previously worked in the palace had to relocate to other areas of the museum that were spared by the fire. The botanical garden building is now temporarily home to many staff from sectors directly affected by the disaster. It was originally only used by the botany and vertebrates departments, as well as the Central Library. “Now, almost everyone from the entomology, geology, and paleontology departments are based in the building, as well as some researchers from invertebrates,” says zoologist Ronaldo Fernandes, head of the vertebrates department. Graduate students still working on their dissertations and theses have also made the move. Before the pandemic, people took it in turns working on site to avoid overcrowding, but now, working remotely has become the norm for everyone, due to social distancing measures.

The increased use of these areas has created problems when it comes to sharing space and equipment. However, financial aid from the Brazilian Federal Agency for Support and Evaluation of Graduate Education (CAPES) and the Rio de Janeiro State Research Support Foundation (FAPERJ) has helped pay for new scientific instruments and computers for many of the displaced researchers. In the last two years, the vertebrates department’s molecular laboratory has even been expanded to accommodate the greater demand for analysis. It is now considering purchasing a microtomograph, which would increase the potential for morphology studies not only in the field of vertebrates, but also in other areas of the museum, such as paleontology and biological anthropology. 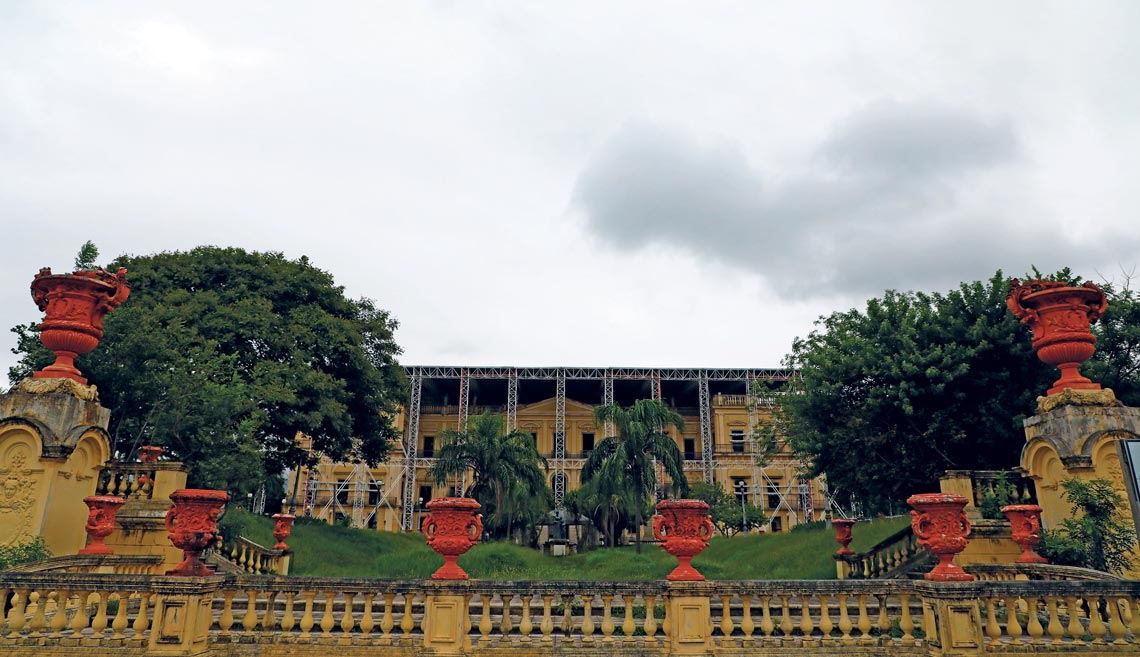 Much of the research conducted by staff from the museum relies on field investigations, which has suffered less impact from the fire. Together with Kellner, paleontologist Juliana Sayão runs the Paleoantar project, linked to the Brazilian Antarctic Program (PROANTAR). “In November 2018, two months after the fire, we went to Antarctica. We came back with more than a ton of fossils and began exhibiting the material at the Casa da Moeda at the beginning of 2019,” recalls Sayão. Since 2015, a team of eight researchers, including professors and graduate students from the National Museum and other institutions, has spent 20–50 days on Antarctica each summer looking for traces of the icy continent’s distant past. Last year, Kellner presented a set of bones belonging to pterosaurs, winged reptiles that lived some 85 million years ago, which he found during expeditions to two islands in the Antarctic Peninsula. The fossils were in the São Cristóvão Palace at the time of the fire, but some were rescued in a good enough condition to be studied.

This year, two more articles resulting from trips to Antarctica have been published: one describing Hoploparia echinata, a new species of crayfish; and the other highlighting the first occurrence of a type of fossil coral on James Ross Island. Due to the pandemic, it will not be possible to resume fieldwork in the continent’s next summer, which falls between December and March. Paleontologists from the National Museum will instead work on academic papers based on material already collected. “Knowing the Antarctic’s past and all the processes that led to its freezing helps us to understand the biodiversity of our entire planet,” says Sayão.

Fieldwork by other teams from the museum has also continued since the disaster. At this moment, in the midst of the pandemic, astronomer Maria Elizabeth Zucolotto from the museum’s meteorology department is leading an expedition to the outback of Pernambuco, where a meteorite shower recently fell over the small town of Santa Filomena. Since August, the researcher has been looking for fragments of these solid bodies from space. The invertebrates department has been working hard to rebuild its arachnology collection, which was consumed in its entirety by the flames. The museum’s researchers are certainly not twiddling their thumbs while they wait for the São Cristóvão Palace to be rebuilt.