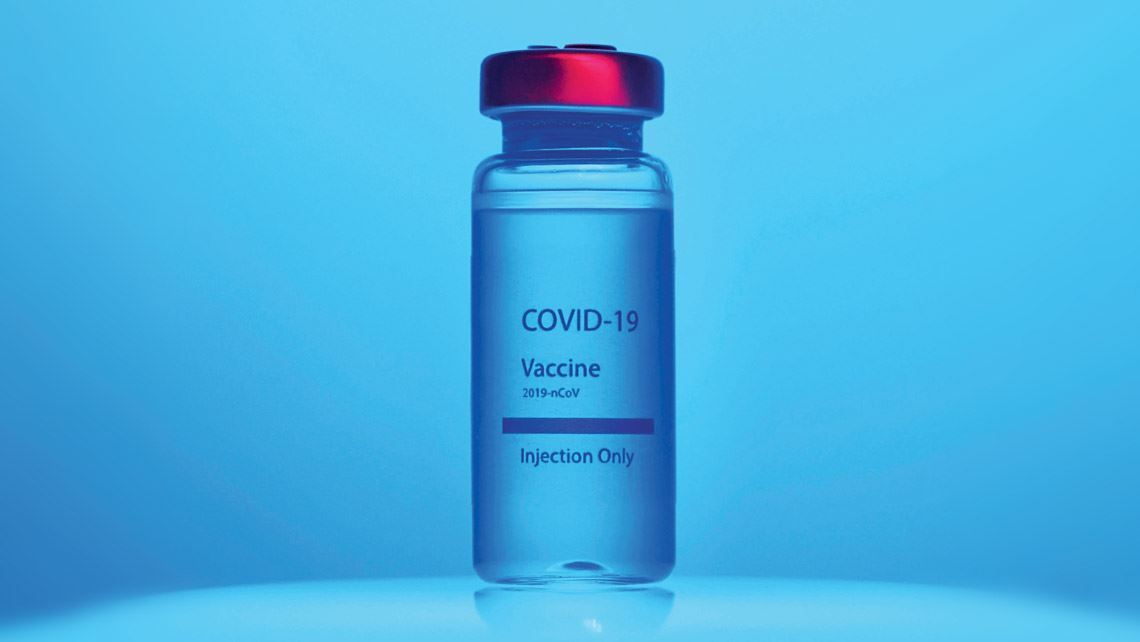 The successful first generation of vaccines against SARS-CoV-2, the virus that causes COVID-19, has helped change the course of the pandemic in several regions of the world, but this has not deterred scientists from pursuing another objective: the development of a broad-spectrum—or universal—coronavirus vaccine. The aim is to provide protection on multiple fronts: against the variants fueling the current epidemic; the mutations that will certainly emerge as long as transmission of the virus remains high on a global level; and potential unknown strains of other coronaviruses capable of infecting humans by jumping from animal hosts such as birds and bats, giving rise to new pandemics. Universities, research institutes, and pharmaceutical and biotechnology companies from around the world have embraced this endeavor, and the most advanced projects, most based in the USA, have been able to provoke strong immune responses to more than one coronavirus in mice and monkeys. The next step is clinical trials on humans.

“It’s hard to say how far away we are from a vaccine like this until we actually create one,” structural biologist Jason McLellan, from the University of Texas at Austin, USA, told Pesquisa FAPESP. There are also different levels of success. “The first level would be protection against all SARS type coronaviruses [related to Severe Acute Respiratory Syndrome], also known as sarbecoviruses,” he says. The second would protect against all betacoronaviruses, which include all of the SARS viruses, plus MERS (Middle East Respiratory Syndrome), and common cold coronaviruses. “The third would be protection against all possible coronaviruses,” explained the researcher. Development becomes increasingly difficult with each level, according to McLellan, who is currently working on designing spike proteins for use as a vaccine antigen.

These spike proteins, the primary target of the current vaccines, involve all the viral particles of the coronaviruses and are responsible for deceiving the body’s healthy cells with points that look like a common human cell signaling molecule. All coronaviruses use this protein structure, which looks like a crown—hence the name of the Coronaviridae family. It is the mechanism through which some manage to enter human cells.

But these proteins can differ across coronavirus variants, genera, and subgenera. The Orthocoronavirinae subfamily of the Coronaviridae family has four genera: alpha, beta, gamma, and delta. Within the betacoronavirus genus, there are five subgenera, one of which is the sarbecovirus, to which the new coronavirus responsible for the current pandemic belongs. Existing vaccines, developed based on the genetic code of the original strain found in Wuhan, China, teach the immune system to recognize the SARS-CoV-2 spike protein. For now, they work well, even against the new emerging strains.

Scientists fear, however, that new mutations may result in SARS-CoV-2 variants that are so different that even the immune systems of vaccinated people cannot recognize them, making first-generation vaccines ineffective. “When the first UK variant appeared, I heard people saying ‘don’t worry, Moderna can make a new vaccine within three months’. Making it in three months is one thing, producing and distributing it is another. In Brazil we are seeing just how long that takes,” says infectious disease specialist Nancy Bellei, from the Federal University of São Paulo (UNIFESP). “You can’t keep making new vaccines over and over. Ideally we would have a universal one.”

Bellei specializes in respiratory viruses and explains that developing a universal coronavirus vaccine could be easier than for the influenza viruses, which have been circulating among humans for much longer and whose mutation rate is far higher. Every year, she says, four influenza strains have to be chosen for the vaccine from more than 10,000 in circulation. The Center for Infectious Disease Research and Policy (CIDRAP) at the University of Minnesota, USA, reports that there are 110 universal influenza vaccine candidates in development worldwide, using six different technological platforms. Twenty-one are in the clinical trials stage, but none have yet been approved for use.

“The first influenza vaccine was created in 1940. In the last 80 years, there has been no advancement in terms of platform like we have seen over the last year with COVID-19. The most widely distributed vaccine in the world was developed in the 1940s and manufactured using embryonated eggs,” says Bellei. Although vaccine platforms have evolved, the flu virus’s high mutation rate makes it difficult to choose which genetic material to include in the vaccine. The researcher says that SARS-CoV-2 is still adapting to the human species, but it tends to be much more stable than the flu virus because of an enzyme that corrects replication errors, meaning the coronavirus undergoes fewer mutations. She points out that no universal vaccine currently exists for any infectious disease with more than one viral subtype.

In March this year, the Coalition for Epidemic Preparedness Innovations (CEPI) issued a call for research proposals, offering US$200 million for the development of vaccines that provide protection against SARS-CoV-2 and other betacoronaviruses. Prior to the emergence of COVID-19, the organization’s priority diseases included chikungunya, ebola, and others. Through a partnership between public and private bodies, CEPI was formed in the Swiss city of Davos in 2017 to support the development of vaccines to stop future epidemics.

“It is estimated that the current pandemic will end up costing between US$8 and 16 trillion globally, some 500 times more than would be required for preventing the next pandemic,” wrote Wayne Koff, CEO of the Human Vaccines Project, and Seth Berkley, CEO of the Global Alliance for Vaccines and Immunization (GAVI), in an editorial published in Science in February, highlighting the need for joint efforts to develop a universal coronavirus vaccine. “SARS-CoV-2 is rapidly adapting to humans, and other novel coronaviruses are mutating, recombining, and replicating in bats and other animal species, positioning to jump species sometime in the future. If we choose to wait for the next coronavirus to emerge, it may be too late, as it was with COVID-19.”

In efforts to prevent such a situation, researchers from the Duke University School of Medicine and the Department of Epidemiology at the University of North Carolina at Chapel Hill, USA, obtained encouraging results in tests of two different platforms on monkeys and mice. One of them uses messenger RNA (mRNA) like the current BioNTech/Pfizer and Moderna vaccines, but with genetic sequences from several viruses; the other uses ferritin nanoparticles, which function as a platform for delivering proteins from a specific segment of the spike protein. Both induced the production of neutralizing antibodies against different sarbecoviruses, according to a study published in Nature in May.

“We showed that our vaccine works and protects against SARS-CoV-2 in monkeys; in mice, it was effective against bat viruses. The next step is to produce it for a phase 1 clinical trial in humans, which will take at least a year. That will be followed by a trial to verify safety and a study of the number of neutralizing antibodies created, which will take another year or so,” immunologist Barton Ford Haynes, lead author of the article, said in an email to Duke University School of Medicine. “We are currently waiting for funding to produce the vaccine for human trials.”

In April, the US Food and Drug Administration (FDA) authorized the Walter Reed Army Institute of Research to begin phase 1 clinical trials of a ferritin nanoparticle vaccine. The tests, which began on April 6, will involve 72 unvaccinated people who have not previously contracted the virus. Participants will be given two doses, with an interval of one month.

Kayvon Modjarrad, director of the institute’s emerging infectious diseases branch and the trial’s coordinator, hopes the vaccine will work for all SARS-CoV-2 strains as well as for SARS-CoV-1, responsible for the first SARS epidemic in 2002 and 2003, which did not affect Brazil. “Everything seems to be going well so far in terms of safety. We will have more information on the immune response of the first 25 volunteers in the next few weeks,” Modjarrad told Pesquisa FAPESP. “We even thought about administering a third dose, but our studies showed a very strong response with two.” The participants will be followed for 18 months.

“The problem with developing a universal vaccine that protects not only against SARS-CoV-2, but also against common cold coronaviruses like 229E, OC43, NL63, and HKU1, is that these viruses are very different from each other and from SARS-CoV-2. This makes everything more difficult. We are working on proof-of-concept studies to determine whether or not it will be possible,” said David Martinez, a viral immunologist at the University of North Carolina at Chapel Hill.

On the other side of the USA, a team from the California Institute of Technology (Caltech) on the west coast took another approach—mosaic nanoparticles with different versions of the part of spike that binds to human cells—which stimulated the production of neutralizing antibodies against sarbecoviruses in mice but offered no protection against MERS. “We are starting studies to evaluate the protection it offers against SARS-CoV-1 and SARS-CoV-2 viruses in vaccinated primates compared to unvaccinated ones,” said the study coordinator, bioengineer Pamela Bjorkman. “If we are successful, the next step will be clinical trials in humans.”

Ana Marisa Chudzinski-Tavassi, director of the Center for Development and Innovation (CDI) at the Butantan Institute, explains that different research groups are pursuing the same objective via different strategies. “Everyone is looking for common viral sequences with low mutation rates in viruses that are known to exist in animal reservoirs and could jump to humans,” she explains. The CDI is currently focused on developing a multiantigenic vaccine based on the knowledge it has obtained from a vaccine composed of chimeric peptides that the group has been working on for over three years.

“Since the pandemic began, we have been conducting computational analyses to determine how different protein structures might be able to induce a broad-spectrum immunogenic response,” says Chudzinski-Tavassi. These analyses include the evaluation of potential mutations by studying regions with a high mutation rate, virus segments with no recorded mutations to date, and places where mutations have already gained a foothold. “Our analyses assess the capability of different chimeric antigens to stimulate the desired immune response,” she says. “We can perform a computational analysis of certain epitopes [parts of the antigen to which the antibody binds] and potential variations of the spike protein and nucleocapsid, for example, and then enter the results into the protein platform that we have already developed to obtain a vaccine antigen in the form of a recombinant protein that is better at recognizing different variants of SARS-CoV-2, and maybe even other viruses.”