Artistic representations of Tabby's Star, orbited by a thick ring of dust that would explain the irregular eclipses of the star (

Brazilian astronomer Roberto Kalbusch Saito was searching for stars that brighten at regular intervals—which helps scientists calculate galactic distances—when he encountered an object behaving strangely that he has been unable to explain. Described in an article published in the journal Monthly Notices of the Royal Astronomical Society in November, the enigmatic star was named VVV-WIT-07. WIT stands for “what is this?” The number indicates that the star is the seventh object to display this unexpected behavior from the approximately 800 million that have been observed between 2010 and 2018 by the Vista telescope in Chile, which is creating a three-dimensional, high-resolution map of the center of the Milky Way.

Of the seven objects detected by Vista whose brightness fluctuates abnormally, six showed an initial increase in light emission that then faded. This behavior led the astronomer of the Federal University of Santa Catarina (UFSC) and his colleagues to speculate that these objects are stars that have experienced surface eruptions. The exception was VVV-WIT-01, which vanished after emitting a burst of light, possibly having suffered an explosive death. However, VVV-WIT-07 behaved differently than the other six objects. Instead of increasing in brightness, this star experienced several dips in luminosity, as if a dense body was passing in front of the star and preventing a portion of its light from reaching Earth.

Saito and his colleagues noted that these eclipses were highly irregular. The reductions in brightness were variable, and the frequency of the reductions was inconsistent. Stellar eclipses, caused when the light from a star is obscured by a planet or a smaller star, usually occur at regular intervals and can be mapped on light curve graphs, which show how the brightness varies over time. Each eclipse causes a decrease in the amount of light reaching Earth, followed by an increase in brightness, always with the same duration and intensity. “When a spherical body like a planet passes in front of a star, it generates a U-shaped graph,” explains Saito.

This effect was not the case for VVV-WIT-07. Observed 85 times in the last eight years, this star—which appears to be older than the Sun and has an unknown mass—suffered at least four major dips in luminosity of varying intensities and durations. The longest reduction in brightness occurred in 2012.

In late May of that year, the star slowly began to lose brightness over a period of 48 days. In July, the luminosity of the star abruptly decreased by 80% in an event that lasted 11 days. At the end of the eclipse, the star returned to its previous brightness within just a few days. “VVV-WIT-07 does not fit into any existing category of variable star,” says Saito. He is still unable to offer a detailed explanation for the eclipses. The variations could be caused by remnants of a newly formed planetary system, clouds of dust released by a low-mass star, or fragments of a planet that suffered a recent collision. “We do not know what we’re seeing,” he says. 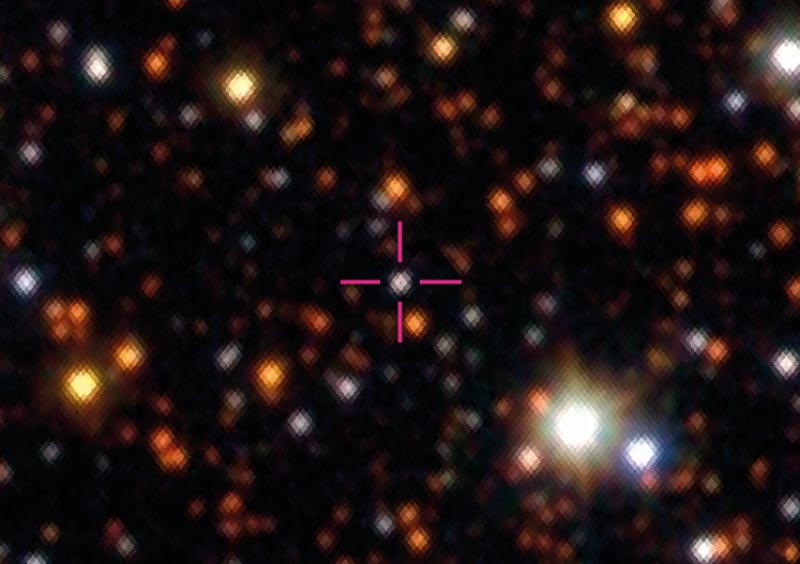 To date, only two other stars have exhibited similar behavior. The first star was described in 2012 by American astronomer Eric Mamajek, a professor at the University of Rochester, USA. Working in Chile at the time, Mamajek analyzed data from the SuperWASP, a telescope array that can detect extrasolar planets, and identified the irregular eclipse of a star with a mass similar to that of the Sun but much younger than the Sun: Swasp J140747.93-394542.6, or simply J1407. At 16 million years old and 420 light-years from Earth, the star showed an unusual dip in brightness that lasted several days in early 2007, culminating in April with a 95% reduction. In an article describing the event in The Astronomical Journal, Mamajek and his colleagues suggested that the event may have been an eclipse caused by a planet with rings much larger and denser than those of Saturn.

Three years later, American astronomer Tabetha Boyajian reported another unusual star. During her postdoctoral fellowship at Yale University, USA, she had access to four years of data from NASA’s Kepler satellite, which was searching for Earth-like planets in 150,000 star systems. While the data were being automatically analyzed, Boyajian, researchers from the US and Europe and almost 3,000 amateur astronomers manually reviewed the light curves produced by Kepler. One curve in particular caught her attention. A star similar to the Sun, located in the Cygnus constellation 1,470 light-years from Earth, had experienced 10 occultations.

The eclipses of this star—called KIC 8462852 and nicknamed Tabby’s Star—also varied in duration and reduced the brightness of the star by anywhere from 0.5% to 22%. If the most significant of these events was caused by a planet, the planet would have to be a thousand times larger than Earth, said Boyajian, now a professor at Louisiana State University, USA, in a TED lecture in 2016. In the article describing the occultations, published in the Monthly Notices of the Royal Astronomical Society in 2015, the authors presented a number of possible explanations for the phenomenon. The most plausible, the authors said, is that the light from Tabby’s Star was blocked by a swarm of hundreds or thousands of comets or fragments released by the rupture of a rocky body at least 100 kilometers in diameter.

“Although many stars vary in brightness, I do not know of any others that vary in the way these three stars do,” says Brazilian astronomer Márcio Catelan, a professor at the Pontifical Catholic University of Chile and coauthor of the paper on VVV-WIT-07. “I believe these are just the first of a new class of variable objects, which could be called Tabby-Bobby-Mamajek stars.” Other objects are expected to be found in surveys planned for the next decade.

For now, researchers do not know how different VVV-WIT-07 is from the other two stars. “There is still very little information on VVV-WIT-07,” Boyajian told Pesquisa FAPESP via email. “It seems to be hotter and larger in mass than the other two cases, but we do not yet know if it is younger, older, or the same age,” said Mamajek, also via email.