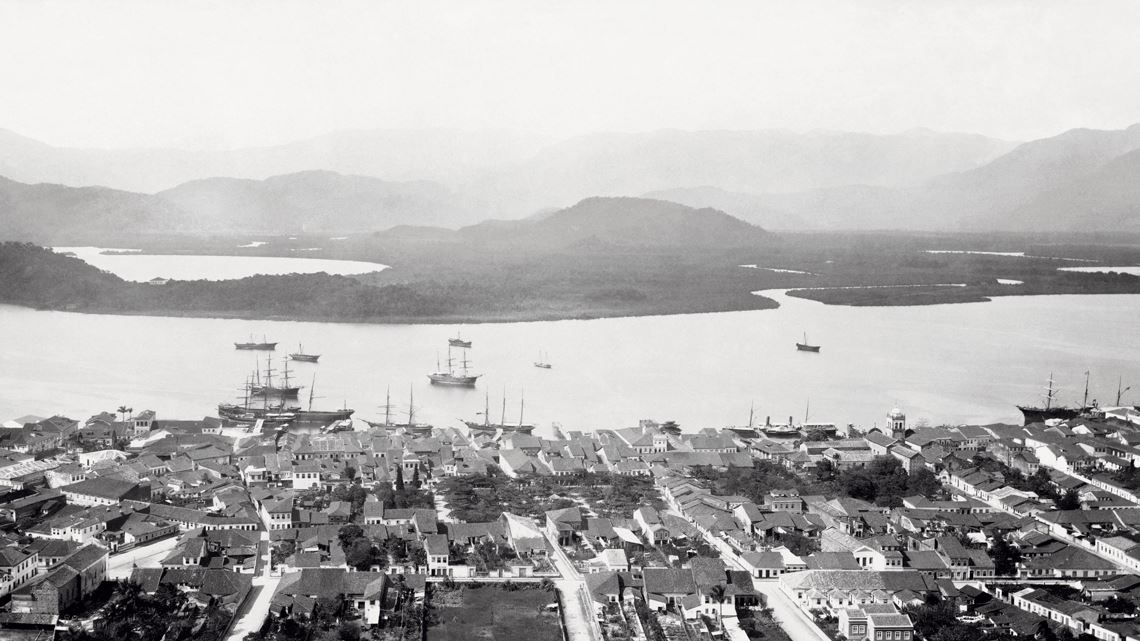 The Port of Santos circa 1880: one of the entry points of the bacterium Yersinia pestis

Piles of hundreds of dead rats could be found in warehouses, alleys, and on rooftops in the city of Santos, on the coast of the state of São Paulo, in October 1899. It was an unmistakable sign of the arrival of the dreaded bubonic plague, also known as the black plague, which had caused the death of around 50 million people in Europe in the fourteenth century and more than 12 million people in India and China in the nineteenth century. At the time, Santos was the port for coffee export, the main product of the state of São Paulo at the time. It was the second largest port in the country after then-capital Rio de Janeiro.

Despite facing resistance, experienced doctors acted quickly to identify and fight the plague under the leadership of Emílio Ribas (1862–1925), in São Paulo, and Oswaldo Cruz (1872–1917), in Rio de Janeiro. “They both had great power of intervention due to their accumulated scientific and political capital,” says doctor and disease historian Dilene Raimundo do Nascimento, from the Oswaldo Cruz Foundation (FIOCRUZ), in Rio de Janeiro. “Soon after recognizing the disease, they isolated the patients,” adds historian Olga Alves, a researcher at the Memory Center of the Butantan Institute.

The plague reached Paraguay first, in September 1899. Alerted by the news from its neighboring country, the Brazilian government ordered the anti-plague serum from the Pasteur Institute in Paris and then focused on the rats, carriers of the disease, which came with the ships and spread through port cities. 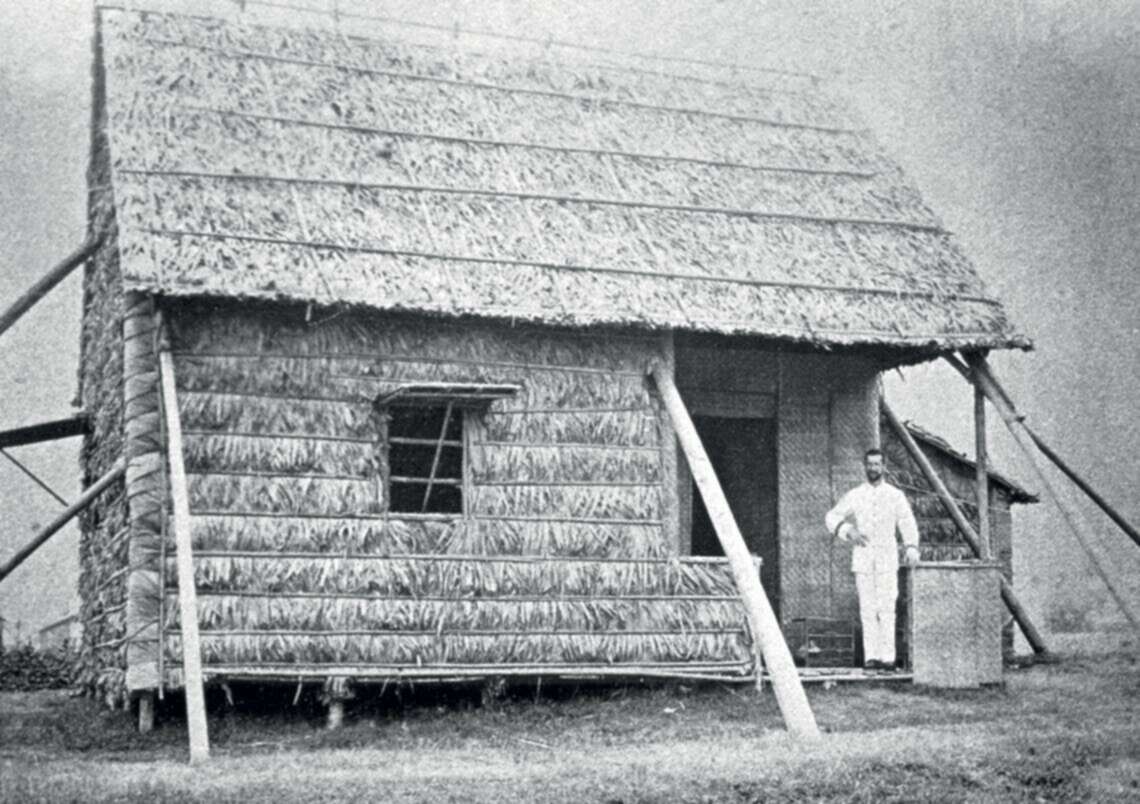 Knowing about the disease was central to the plan to stop it. In 1894, two bacteriologists, the Swiss Alexandre Yersin (1863–1943), in Hong Kong, and the Japanese Kitasato Shibasaburo (1853–1931), in Japan, identified the bacterium that caused the disease, named Yersinia pestis. In 1895, back at the Pasteur Institute in Paris, Yersin teamed up with biologist Léon Charles Albert Calmette (1863–1933) and doctor Émile Roux (1853–1933) to develop a serum against the plague, tested on humans three years later. It was also in 1898 that the French doctor Paul-Louis Simond (1858–1947) discovered the bacterium was transmitted to humans through flea (Xenopsylla cheopis) bites after the fleas were infested by feeding on the blood of rats. We now know that the microbe proliferates in the lymph nodes, which become swollen—the so-called buboes—and sometimes rupture. Symptoms include high fever, pain, vomiting, bloody cough, and seizures.

In August 1899, after hearing the plague had reached the city of Porto, Portugal, the Brazilian government decided that all ships coming from Portugal and Spain should undergo a 20-day quarantine before berthing. In letters published in the newspaper Jornal do Commercio, the director of Hygiene and Welfare of the State of Rio de Janeiro, Dr. Jorge Alberto Leite Pinto (1865–1934), contested the measures. He argued that the plague could easily be treated according to what was known about it. In a November 2013 article in the magazine História, Ciências, Saúde – Manguinhos [History, Science, Health – Manguinhos], Nascimento and historian of science Matheus Silva, then from FIOCRUZ, pointed out that Pinto claimed the quarantine of foreign ships could cause economic losses and raise the price of imported products. According to the two researchers, Pinto believed the interests of commerce should prevail, as “it is not up to the government to interfere or cause losses in commercial relations.” His protests, however, had no practical effect. The following month, news arrived of the plague spreading in Paraguay.

As director of the São Paulo Health Service, Emílio Ribas, upon finding that the port of Santos could be a point of entry for the plague, took preventive measures. From 1896 to 1898, he ordered the demolition of slum tenements and the cleaning of houses, streets, and vacant lots to eliminate outbreaks of Aedes aegypti, carrier of yellow fever—another public health issue. 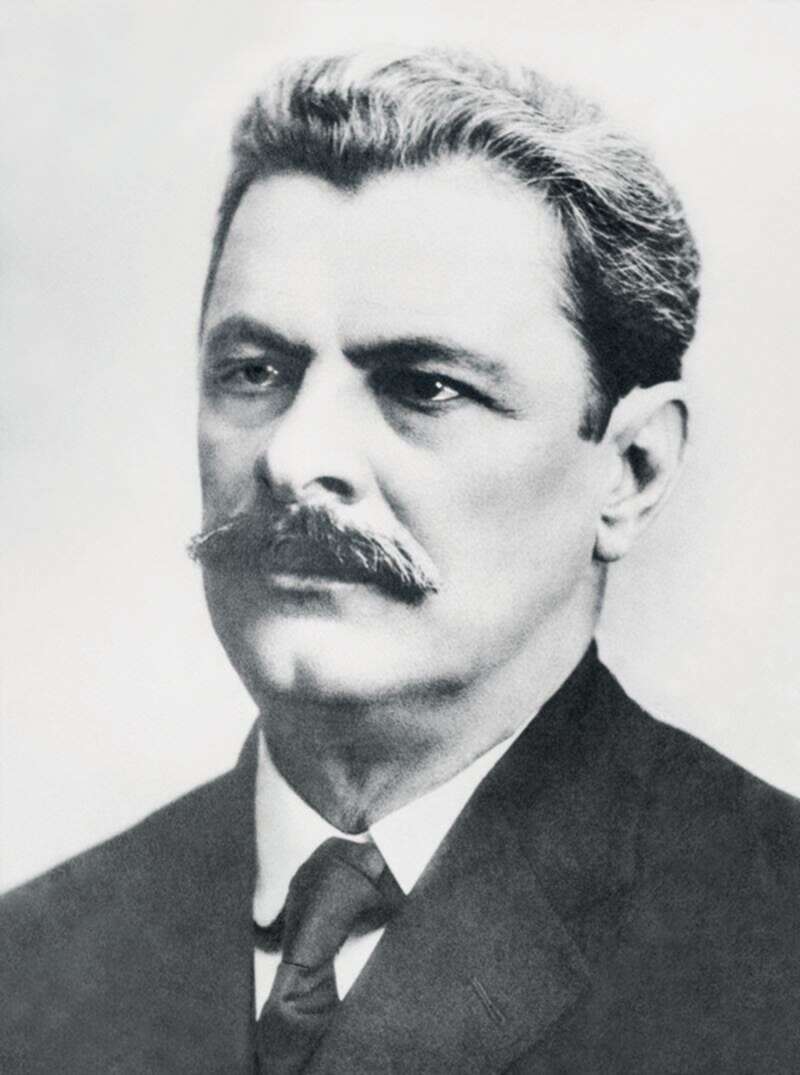 The first doctor sent by Ribas to the coast, on October 9, was Minas Gerais native Vital Brazil Mineiro da Campanha (1865–1950). He took a microscope, bacteria culture media, test tubes, and autopsy instruments, and set up a laboratory in one of the rooms at the Isolation Hospital and began to study live rats from areas where dead ones had been found.

Soon after arriving in Santos, another doctor on the team, Rio de Janeiro native Guilherme Álvaro da Silva (1869–1930) learned of a patient who had died days earlier at the Santa Casa Hospital, with a severe infection and swelling of the right groin node. Upon finding dead rats near the house where the patient lived, Silva concluded he had died of the plague—and not yellow fever, as was initially determined. In his 1919 book, A Campanha Sanitária de Santos – Suas Causas e Seus Efeitos (The Health Campaign of Santos – Causes and Effects), Silva reported that “rats were then very numerous in Santos; at night, whole hordes of them could be seen roaming the streets.”

Another Health Service doctor, Rio de Janeiro native Adolfo Lutz (1855–1940), arrived on October 14, when the first suspected cases, patients, and deaths began to occur. In a February 1899 report initially published in the São Paulo Medical Journal, Vital Brazil describes the evolution of the disease, experiments on animals, and how the bacteria behaved: “The coccobacillus does not seem to be mobile. It clumps under the influence of anti-pest serum,” he noted. The examinations and autopsies, personally overseen by Ribas, who was also present, confirmed the bubonic plague. Four days later, the official statement was released and the hunt for rats began in houses, stables, and port warehouses.

Santos residents protested at the prospect of losses from the probable closure of the port. Upon request, Rio de Janeiro surgeon Eduardo Chapot-Prévost, a professor at the Rio de Janeiro School of Medicine, traveled to Santos to examine the patients and confirmed the findings of his fellow doctors. But this was not enough to settle Santos residents.

At the invitation of Santos city council members, who sought a second opinion, Oswaldo Cruz arrived on October 22. Cruz had spent three years at the Pasteur Institute in Paris. Five days later, in a telegram to the federal government, he reported he had isolated “the same bacterial form that affects humans” in sick and dead animals, thus completing the diagnosis according to the conditions established by chemist Louis Pasteur (1822–1895 ). “The clinical, epidemiological, and bacteriological criteria allow me to definitively state that the bubonic plague is the disease we are facing,” he concluded. “That was a significant moment for the strengthening of bacteriology and scientific research,” observes Nascimento.

Cruz also had to care for Vital Brazil, who fell ill with the plague and recovered thanks to the imported anti-plague serum. “We do not understand to this day why we were not affected by the disease, which had overwhelmed Dr. Vital Brazil the previous day in the Isolation Hospital, where he was working,” noted Silva in his 1919 book, when reporting a visit to a home where four people had died of the plague. He and his team had found “more than 40 dead rats scattered on the ground, many already decomposing” in the pantry of the home and were bitten by fleas , but they did not fall ill.

By late December 1899, 35 people with the plague had been treated at the Isolation Hospital, of whom 15 died—a result well below the historic fatality rates of the plague, which killed nearly all who were infected by it. However, Santos traders still challenged the doctors. In search of divergent opinions, Lutz sent samples from the patients’ nodes to experts in Paris, London, and Hamburg; they all confirmed the plague. 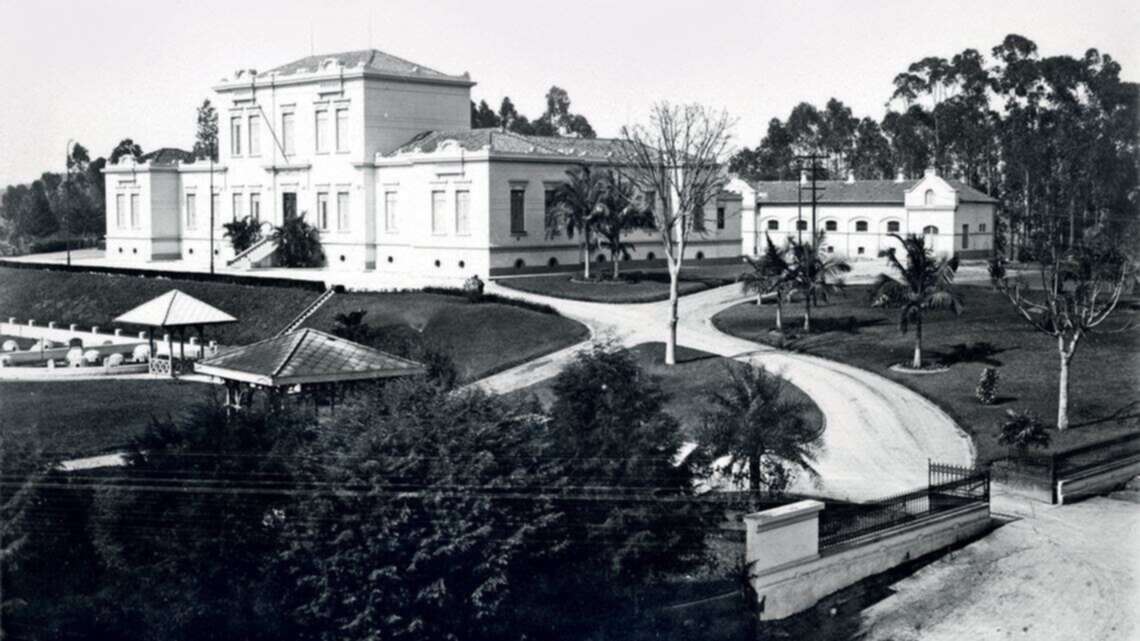 The city of São Paulo recorded its first case of the plague in early November of that year, with healthcare professionals soon endeavoring to locate and isolate those infected and implement measures to fight the rat infestation. Strategies used were: the cleaning of sewers, warehouses, and homes by Health Service employees; the distribution of a booklet entitled Peste, Matança dos Ratos (The Plague and the Killing of Rats), with Portuguese, Italian, German, English, and French versions; and a campaign encouraging the population itself to kill rats, for which the government would compensate.

In November 1899 alone, the Center for Disinfection, a Health Service entity, bought from the residents about 14,000 rats, which were then incinerated. However, these measures caused some problems. “Over the following months, many people made hunting rodents their livelihood,” shares archivist Maria Talib Assad, from the Emílio Ribas Public Health Museum, located in the building where this Health Service unit operated at the beginning of the 20th century. This unwanted effect led to the suspension of the measure.

“During the Santos outbreak, Emílio Ribas began thinking about producing the anti-plague serum in Brazil, since it could only be imported in small quantities due to significant demand from other countries,” explains Alves. Negotiations with the São Paulo government led to the creation of the Instituto Soroterápico do Estado de São Paulo (São Paulo Serum Therapy Institute), renamed in 1918 to Instituto Soroterápico do Butantan (Butantan Serum Therapy Institute), and in 1925 to Instituto Butantan (Butantan Institute). Directed by Vital Brazil, it produced the anti-plague serum and later specialized in sera against snake bites—common in rural São Paulo—and in vaccines.

Likely coming from Santos, the plague arrived in the city of Rio in January 1900 and spread to São Luís, in the state of Maranhão, and Recife, in Pernambuco. Oswaldo Cruz went on to establish the Instituto de Manguinhos (Manguinhos Institute), now FIOCRUZ, to also produce the anti-plague serum. Today, it has become one of the main national centers for vaccine production. Even so, about 300 people died of the plague in 1900 in Brazil’s capital. The total number of deaths was 199 in 1901, 215 in 1902, 360 in 1903, and 274 in 1904. 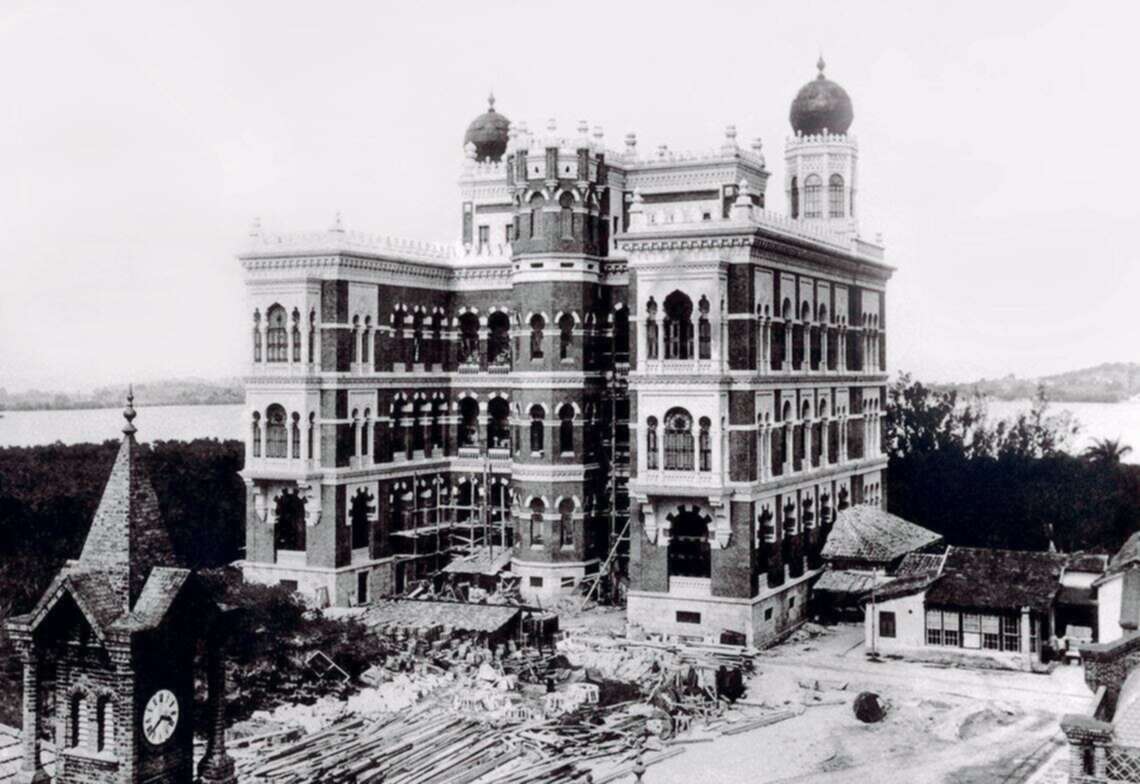 In 1903, President Francisco de Paula Rodrigues Alves (1848–1919), in an effort to modernize the city of Rio, placed Cruz at the helm of the General Directorate of Public Health (DGSP). “Oswaldo Cruz received carte blanche to end the three main epidemic diseases of the time: smallpox, bubonic plague, and yellow fever,” shares Nascimento. “Vaccination and the elimination of rats and mosquitoes were of interest to Rodrigues Alves, who was planning an urban reform to turn Rio into a beautiful city like Paris. Political and health interests converged.”

At that time, the population once again opposed the mandatory smallpox vaccination. Protesters would express fears that the vaccine could make people look like oxen, since it was made from material collected from sick cows, or transmit syphilis, as described by Rio historian Sidney Chalhoub, from Harvard University, United States, in his book Cidade Febril (Feverish City) (Companhia das Letras, 2017).

The campaign against the bubonic plague continued almost without challenge because the population was already aware that the disease was transmitted by fleas and rats. There was already a vaccine and the fight against rat infestations was intense. The DGSP also began paying residents for dead rats. “Despite some issues, it was an efficient sanitary practice,” states Nascimento.

Currently treated with antibiotics, which reduce the risk of death to 10%, the plague still affects about 650 people per year worldwide, with around 120 deaths, mainly in Africa, and is seen as a potential hazard in regions with poor sanitary conditions. In Brazil, the last recorded case was in 2005. The United States reported 11 cases in 2015, with three deaths. In 2020, the bubonic plague reemerged in Mongolia, with 15 infected and one death.