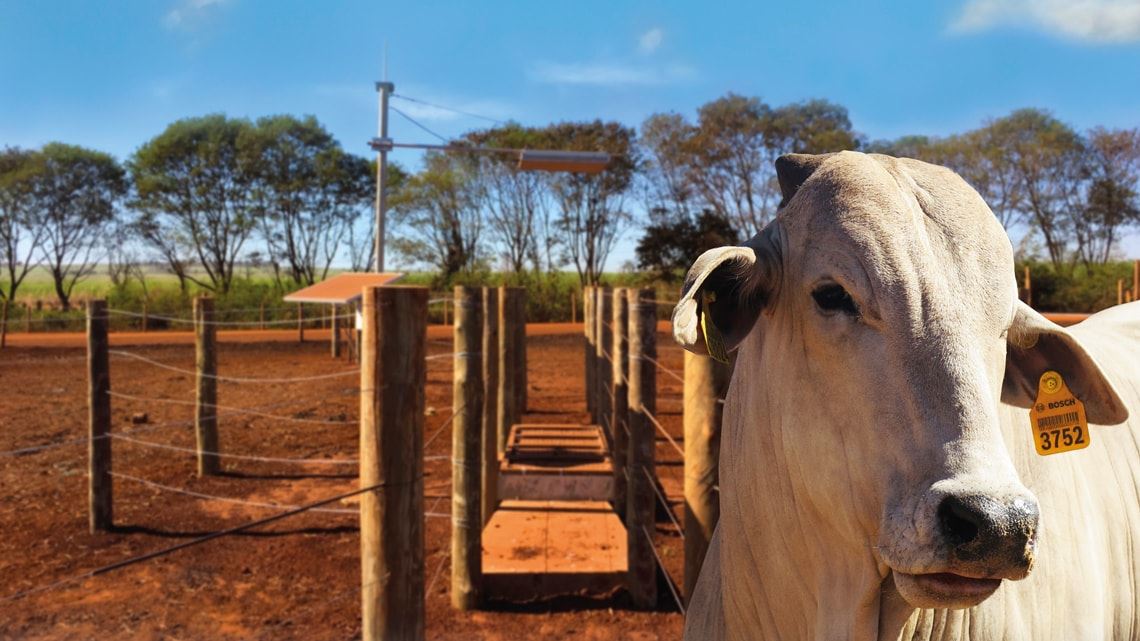 A bull with an electronic identification tag; in the background, a walk-over dynamic weighing scale

Brazilian livestock farmers can now access new technologies to streamline the seemingly trivial, but not always simple, task of weighing cattle. Collecting these data—and using them to inform decisions—is an integral part of what is known as “precision livestock farming,” a term referring to the use of technology and information to enhance farm productivity and profitability. Monitoring animal weight helps beef farmers determine the optimal timing for slaughter and mating and track livestock health, as sudden weight loss can be a sign of deficient nutrition or disease.Most Brazilian farms still use visual estimation to calculate the weight of cattle, but there are now solutions on the market that are far more sophisticated than a simple weighing scale. One of the difficulties with conventional weighing is placing the cattle one at a time on the scale, which is typically located in a corral. This process involves significant livestock handling stress as well as costs. In conventional livestock farming, the cattle are weighed once or twice per year, nearly always during vaccination—that is, when there is a weighing scale on the property. “The bottom line is that cattle are not weighed often enough and accurately enough,” says beef farmer André Bartocci, who serves as director of the Brazilian Association of Nelore Breeders (ACNB).

However, if bringing cattle to the weighing scale is difficult, then the weighing system should be brought to them. One recently developed solution avoids weighing scales altogether by using cameras that estimate cattle weight. “The product is designed to allow farmers to regularly monitor their herds in the pasture without upsetting their cattle or disrupting their farm operations,” says computer scientist Pedro Coutinho, CEO of Olho do Dono, a startup in Espírito Santo. In March, the company deployed the solution at 15 beef farms. A three-dimensional (3D) camera is used to calculate animal weight with the aid of a software system. Images can be captured from anywhere on the farm and with the cattle in movement. Animals need to be at an approximate right angle and a maximum distance of 3 meters from the camera.

“It can be an alley or anywhere where the animals are funneled single-file,” says Coutinho. “Using artificial intelligence, machine learning, and statistics, our program analyzes 500 parameters related to weight. We have already weighed 20,000 bulls to date, with an average individual weighing accuracy of 95%.”

If the cattle have electronic identification tags, then their weight data can be recorded individually. Information is transmitted directly from the camera to a laptop, without the need for an Internet connection. The startup spent four years developing the solution, with support from the Espírito Santo Research and Innovation Funding Foundation (FAPES), the Brazilian Funding Authority for Studies and Projects (FINEP), and investment fund PRIMATEC.

Another solution that has been on the market for at least two years is a walk-over weighing scale that can record weight data while the cattle are moving. Bulls or cows can be weighed on the pasture ground without having to stop for measurement. Coimma, a firm in Dracena (SP), southeastern Brazil, launched a weighing system—dubbed BalPass—in 2017, in collaboration with the Beef Cattle chapter of the Brazilian Agricultural Research Corporation (EMBRAPA), in Brazil’s midwestern city of Campo Grande, and the Federal University of Mato Grosso do Sul (UFMS).

The weighing frame, built of steel lined with wood, can be deployed anywhere on the farm. The system is equipped with a motion sensor, a tag reader to identify each animal, a radio antenna for data transmission, and a solar panel. The scale is typically placed at the passage to the water trough, so animals are weighed at every trough visit. Farmers can monitor weight status from anywhere on a mobile device or laptop computer.

“The development of the product began eight years ago,” says crop scientist Rodrigo Fonseca Rangel da Rocha Gomes, commercial manager at Coimma. “This is part of our vision for increasingly connected cattle farming, leveraging data analytics, the Internet of Things, and artificial intelligence,” he says. 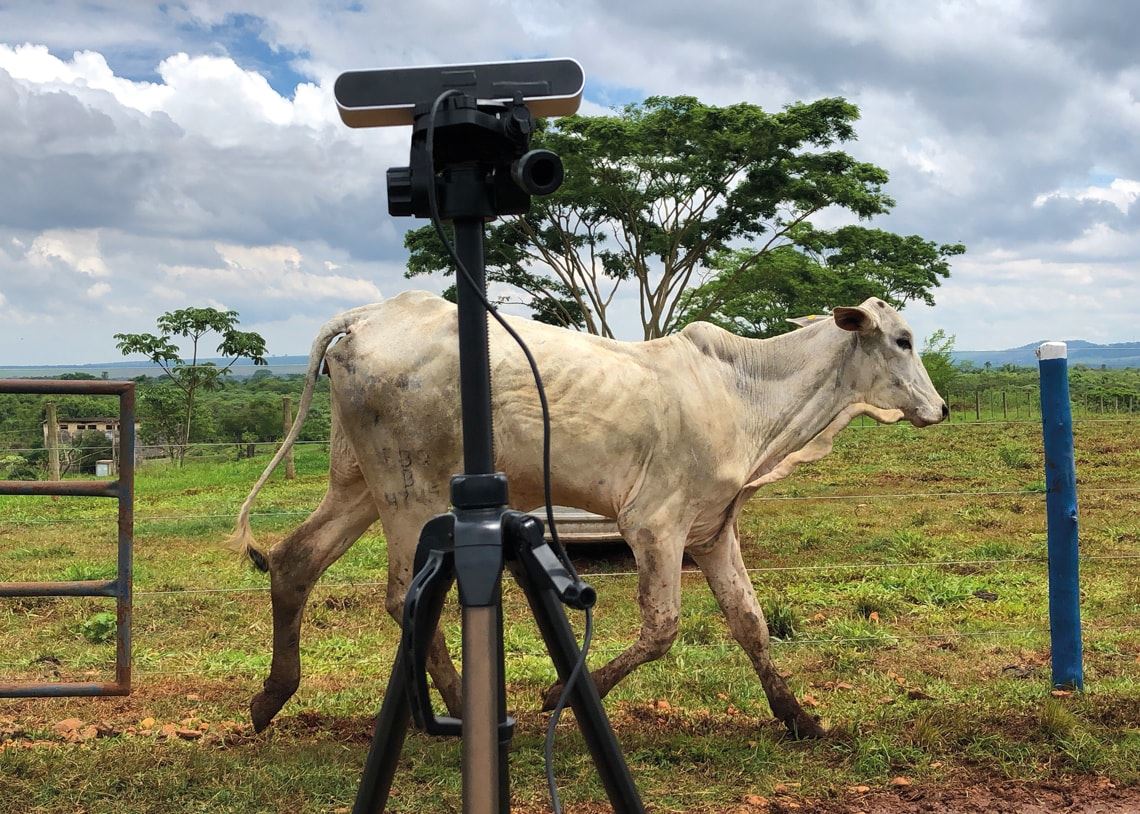 Pasture or confined livestock
The Brazilian division of German multinational enterprise Bosch has also launched a walk-over weighing system, called the Precision Livestock Platform, using a similar concept to that of Coimma. The module can be placed in a narrow passage anywhere on the farm and can be used for both pasture and confined farm operations.

The system is solar-powered and features weighing sensors, a tag reading system, a processing unit, and an antenna for data transmission. “The product is connected to the farm office over the cloud. The algorithm produces a daily weight gain curve for individual animals and the overall herd,” says Paulo Rocca, vice president of Bosch Integrated Solutions Brazil.

The technology was virtually entirely developed in Brazil, with support from Bosch headquarters in Germany. The business unit developing the platform has 20 employees and 20 cattle farmers as customers. “The Brazilian beef farming market is gigantic, but farm operations are not all alike. Therefore, the challenge is deploying the technology at scale and across the diverse spectrum of farms,” says Rocca. 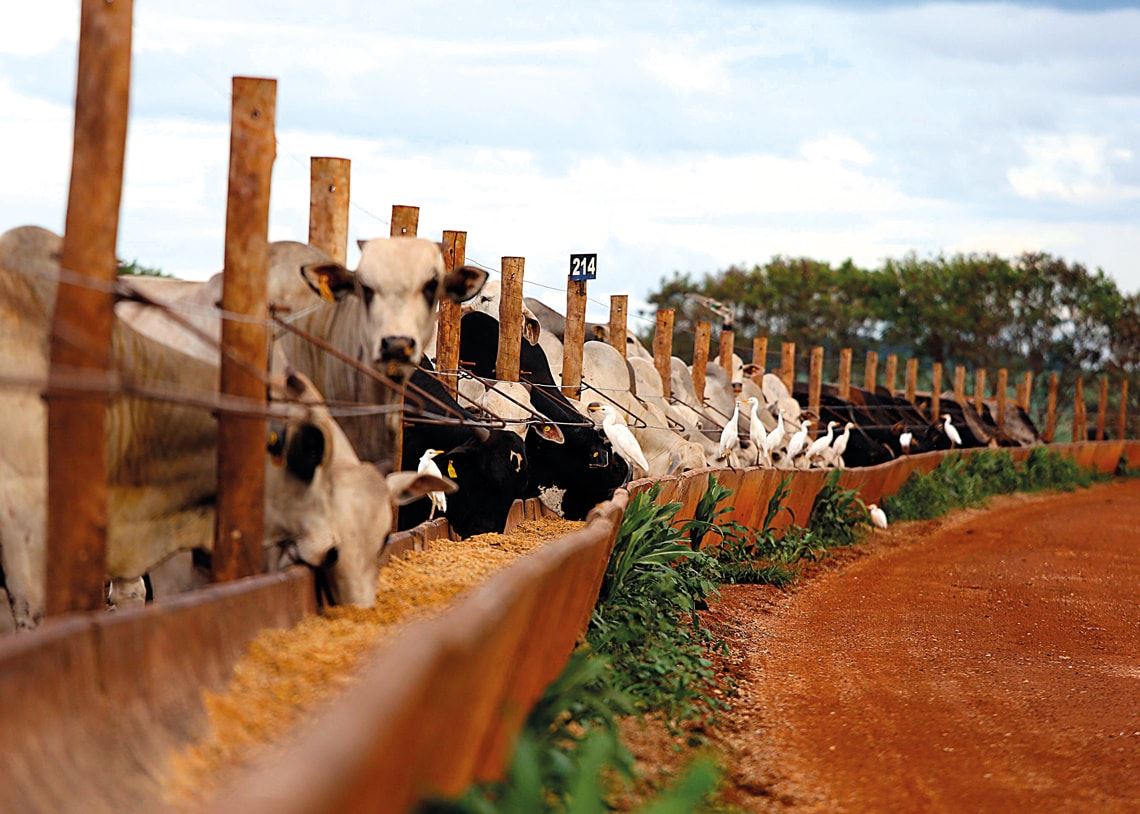 Individual weight is just one of the types of data collected by a solution suite developed by @Tech, a tech spinoff in Piracicaba (SP) that has received FAPESP funding through the program Research for Innovation in Small Businesses, RISB (PIPE, in the Portuguese acronym). The company currently has two products on the market—BeefTrader and 3DBeef—and another eight in the development pipeline, says veterinarian Tiago Albertini, a director at @Tech.

BeefTrader intersects animal data with industry data to determine the optimal timing for farmers to sell their cattle, while 3DBeef uses a system of smart cameras to measure fat thickness in real time. “The processing industry pays farmers on the basis of not only weight but also carcass fat thickness. Meat packers will pay less if the carcass has suboptimal fat thickness,” says Albertini. “Our platform has been proven to improve farmers’ profit margins by 25%.”

Brazil has the world’s largest commercial herd at 238 million head of cattle, followed by the US (94.7 million), China (90 million), the European Union (87.5 million), and Argentina (53.8 million), as reported by the US Department of Agriculture. Cattle farmers around the world have shown an interest in weighing technology developed in Brazil, say the experts interviewed for this article. In these countries, cattle farmers typically use conventional weighing systems to measure animal weight.

However, collecting weight data on the herd is only part of the process; farmers also need to know how to use that data to their advantage, he notes. “If farmers are not interpreting the data they collect, then they are not doing precision farming,” says Bernardi. Animal welfare and environmental issues also need to be addressed by the modern cattle farmer, he concludes.