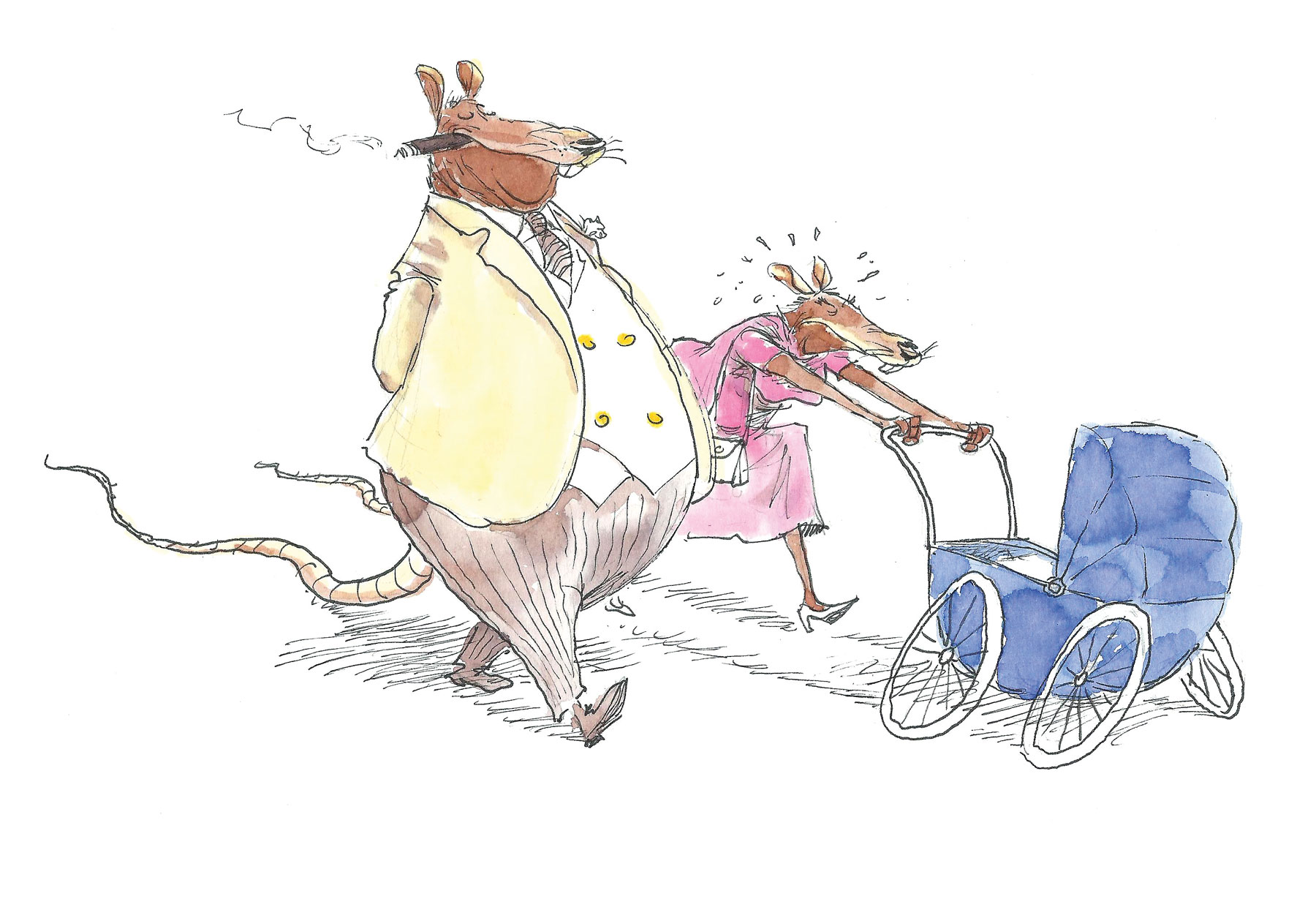 Experiments conducted on rats by researchers from universities in São Paulo reinforce the idea that being overweight may be a phenomenon that transcends generations. This is not just because children tend to inherit genes that favor calorie accumulation and predispose them to obesity, or because they live in an environment with excessive amounts of food available. Through mechanisms that remain poorly understood, alterations in the female’s food supply shortly before or during pregnancy appear to increase the likelihood of producing overweight children and grandchildren.

In a series of experiments, biologist Maria Martha Bernardi and her team at Paulista University (UNIP) fed a high-calorie diet to female rats at the start of their reproductive lives, as well as to rats that were pregnant, to determine what would happen to the first generation of pups and their offspring. The offspring that were born to overfed mothers, as well as those of the subsequent generation, were more likely to become overweight.

The tendency towards excessive weight gain occurred even when the children and grandchildren of these rats were fed only the standard laboratory diet. According to Bernardi, this indicates that the period of fetal development in utero is crucial in defining that animal’s metabolic regulation as well as the metabolic regulation of at least one subsequent generation.

If these changes only appeared in the first generation, a natural conclusion would be that hormonal alterations resulting from the maternal diet affected the offspring. However, since this effect continues into the second generation, researchers suspect that the propensity to gain weight may be regulated by epigenetic mechanisms—alterations in the way genes are turned on and off—resulting from environmental factors such as diet, and thus transmitted to subsequent generations. Changes to the gene activation profile do not directly alter the DNA sequence, even though they are inherited over generations. Although Bernardi’s group has not analyzed the gene activity pattern, data obtained by scientists worldwide indicate that changes to the gene activation profile without alteration of the DNA sequence, may occur in both animals and humans.

Fattening diet
Interestingly, factors other than maternal overfeeding during gestation also appear to affect the gene activation profile, leaving children and grandchildren with a tendency to gain weight. In one experiment conducted in partnership with researchers from the University of São Paulo (USP), the Federal University of the ABC (UFABC) and the University of Santo Amaro (UNISA), 12 pregnant female rats received 40% less food than normal, and eight control rats were fed the standard laboratory diet.

The female rats who received the restricted diet during pregnancy gained less than half the weight of the females who were fed ad libitum. Offspring of the feeding-restricted mothers were born smaller and continued to be thinner for some time, even though they received the same amount of food as the offspring fed ad libitum. The difference only disappeared when the offspring entered adulthood and the two groups of rodents attained similar weights, although the offspring of the hungry rats had more body fat, particularly visceral fat, which accumulates between organs and is associated with a higher risk of cardiovascular problems.

The most important difference appeared in the second generation. The grandchildren of the feeding-restricted rats were born smaller but then became slightly heavier as adults (from 10% to 15%) than the grandchildren of the rats fed ad libitum. These rats had more visceral fat, as well as signs of brain inflammation. This extra weight gain occurred in the offspring even though their first-generation mothers were fed normally. As per the authors of a May 2016 article published in Reproduction, Fertility and Development, it appears as though the food deprivation suffered by the rats in the initial generation led to lasting metabolic reprogramming in their descendants.

Regarding this point, the work by the São Paulo team confirms previous studies that found an association between episodes of hunger during pregnancy and the birth of children with a propensity to gain excess weight and the health problems associated with it. Although they did not identify the specific mechanism for this effect, Martha Bernardi and her team suspect that compounds produced by the bodies of the original generation mothers who were deprived of food during pregnancy, activate genes that favor rapid weight gain in the pups. Thus, chemical signals released by the mother act as a warning that food is scarce in the environment and that available food resources must be used efficiently. That signal received by the pups’ offspring, could represent the chance to grow and survive in an environment with limited food. “But, it can also lead to obesity, if the food supply returns to normal after they are born,” explains Bernardi.

Studies conducted in previous decades described a similar situation among the descendants of women who became pregnant during the so-called Hongerwinter (winter of hunger, in Dutch), at the end of World War II, when Nazi armies that were retreating from the Allies cut off a large portion of the food supply to Holland between late 1944 and early 1945. Both the children and grandchildren of Hongerwinter survivors had obesity rates and metabolic problems that were higher than those of the general population.

Inflammation in the brain
In another study, Bernardi and her colleagues administered hypercaloric feed—a mixture of standard feed plus a liquid supplement rich in different types of fat—to 10 female rats immediately after weaning, while a control group of female rats received normal feed. As expected, the female rats fed the hypercaloric diet as babies were overweight, albeit not obese, upon reaching puberty. Similar effects were observed in their daughters: they were rats that were overweight as adults and suffered metabolic alterations, such as visceral fat accumulation, although they had only been fed a balanced diet for their entire lives. Also published in Reproduction, Fertility and Development, this study, as well as others by the group, indicate that being overweight triggered the inflammatory processes that affected the brains of the mothers and their offspring, in a lasting manner.

If it seems strange that excess weight can lead to cerebral inflammation,
it must be emphasized that fat cells are more than just calorie deposits. Also known as adipocytes, fat cells produce many substances, including inflammatory molecules, which reach the bloodstream and travel to the hypothalamus, the region of the brain associated with several functions, including hunger control.

Unpublished studies by the UNIP group also indicate that this inflammation affects other areas of the rodent brain. The researchers hypothesize that the inflammatory process in the brain is related to the reprogramming signals transmitted from the mother to her pups, including altered appetite control, which may continue throughout adulthood.

For Alicia Kowaltowski, a researcher at the USP Chemistry Institute who studies the relationship between diet and energy production mechanisms in cells, it is likely that the tendency to become overweight or obese is passed from one generation to the next by means other than inheriting genes that favor weight gain. “The question is to find out which mechanisms are behind these phenomena,” states the researcher.

Among these potential mechanisms, one that has attracted interest is epigenetic transformation. The Greek prefix, epi, means superior, and the word epigenetics, coined by English embryologist Conrad Waddington in the 1940s, designates the branch of biology that studies chemical changes caused by the environment that lead to activating or inactivating genes and altering body functions. One common chemical modification that genes undergo is methylation. This occurs when a methyl group, formed by one carbon atom and three hydrogen atoms (CH3), attaches itself to a section of DNA, preventing it from being read by the cell machinery, resulting in the silencing of that region. Studies on several species of animals, plants and fungi have shown that methylation profiles can be transmitted from one generation to the next, affecting the characteristics of the offspring.

Paternal influence
The mother’s role in producing overweight offspring seems to be clear. However, what about the father’s role? “There is some evidence that there may also be a paternal influence, but this evidence is not as clear,” says Martha Bernardi. It would make sense for epigenetic influences to be transmitted paternally, as with other cells in the body, sperm are affected by altered gene activation patterns resulting from environmental influence. If these changes remain after the male cells and the ova come together, the offspring could carry part of its father’s epigenetic memory.

Negreiros
A 2015 study conducted by a team led by Romain Barrès from the University of Copenhagen, Denmark, showed that this scenario is plausible by studying the sperm of 16 obese men and the sperm of 10 normal weight men. In the obese volunteers, epigenetic patterns including methylation patterns, particularly those that are needed to control appetite (and therefore, weight), were concentrated in genes related to nervous system development, which did not occur in the thin volunteers.

“The most important aspect of these discoveries is that they suggest that these modifications can occur in germinal cells; that is, ova and sperm, and that they can be transmitted to future generations,” says physician Licio Augusto Velloso, a professor at the School of Medical Sciences of the University of Campinas (FCM-Unicamp), who studies the cellular and molecular mechanisms related to the origin of obesity and diabetes. “Epigenetic studies have advanced a great deal in the last decade, and it is hoped that in a not-too-distant future, the mapping of environmental factors and their impact on different aspects of epigenetics will help us to prevent important diseases,” affirms Velloso.

Viewing excess weight from the prism of epigenetics can provide another piece of the puzzle in the global obesity epidemic and related metabolic diseases. Historically associated with health and plenty, excess weight has become a significant problem that initially started in rich countries, but today is becoming more common in poorer countries, including Brazil, where almost 60% of the adult population is above the perceived healthy weight, per data from the Brazilian Institute of Geography and Statistics (IBGE). Many developing countries have quickly transitioned from a context in which malnutrition is a serious problem, to another, in which obesity is a great concern.