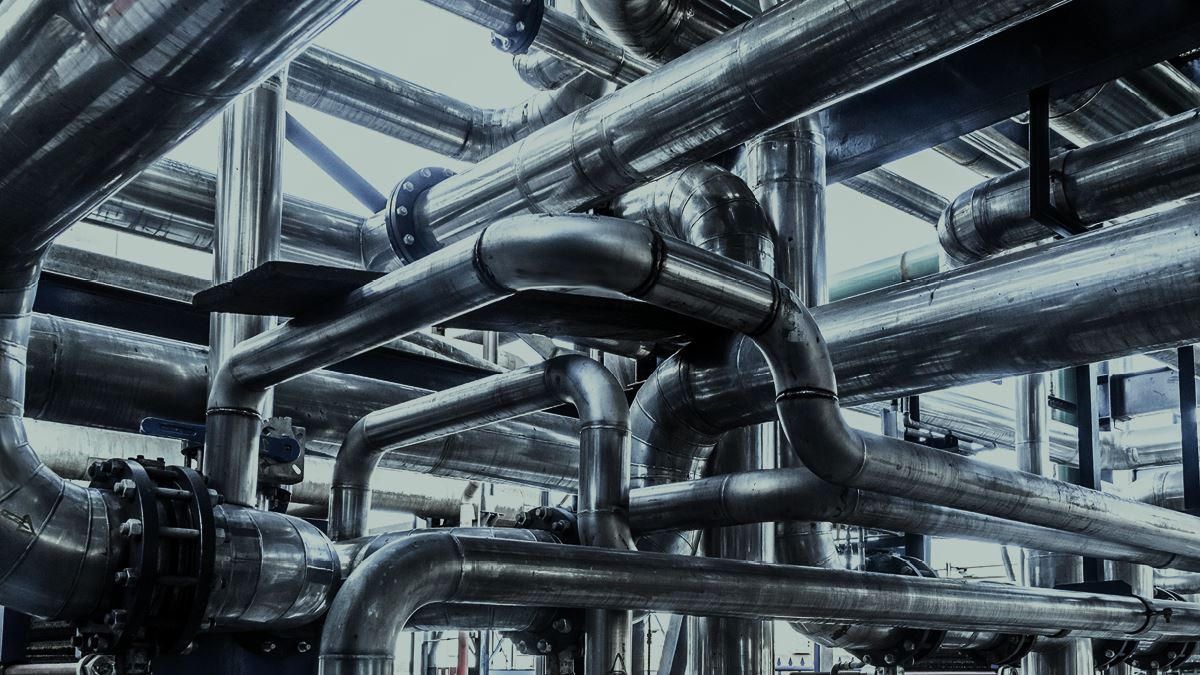 Researchers at the University of Brasília (UnB) and the Pontifical Catholic University of Rio Grande do Sul (PUC-RS) recently conducted a survey to identify the primary agencies and institutions funding science, technology, and innovation (ST&I) efforts in Brazil, using data from InCites®, a platform for research analytics based on the Web of Science (WoS). They analyzed 963,467 scientific papers published by Brazilian authors from 1999 to 2019, including 660,308 papers containing acknowledgments of sources of funding. The survey found that half of these papers were funded by 10 Brazilian institutions, primarily the Brazilian National Council for Scientific and Technological Development (CNPq), which funded 192,871 studies; the Brazilian Federal Agency for Support and Evaluation of Graduate Education (CAPES), which funded 109,352; and FAPESP, with 88,814 funded studies. These three institutions combined funded 59.1% of the research published in the period. “Brazil’s ST&I spending remains highly concentrated in a handful of agencies,” says Concepta Margaret McManus, a researcher at UnB and a co-author of the study, published in Scientometrics.

FAPESP is one of the leading agencies funding research by scientists in São Paulo. Indirectly, the Foundation has also supported scientific output in other states (see table). “Researchers funded by FAPESP often work with scientists from other states in collaborations supported by the Foundation,” says McManus. Another agency that performed strongly in the survey was the Rio de Janeiro State Research Foundation (FAPERJ). Papers published by FAPERJ-funded researchers were the top performers for Category Normalized Citation Impact (CNCI), a metric that compares the impact of articles irrespective of age and subject matter. Their strong performance is attributed to frequent research collaborations with industry, especially oil giant Petrobras. 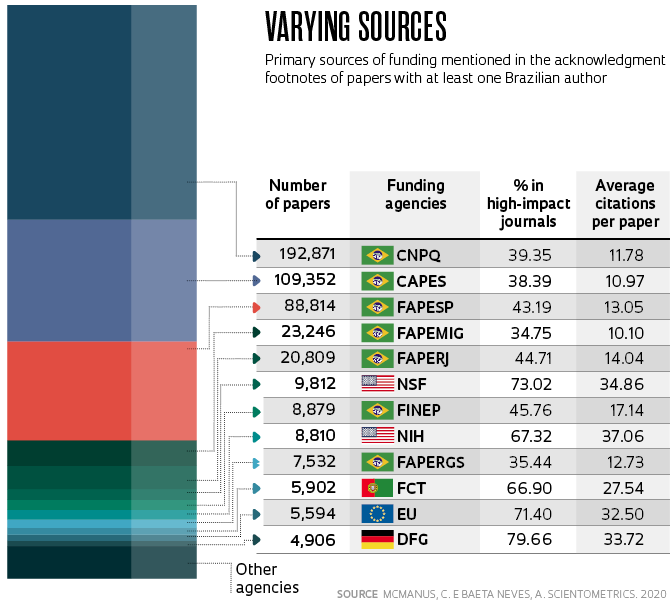 As part of the survey, the researchers also used data about sources of funding to estimate the extent of research internationalization during the period, in an approach that has previously been little explored in scientometric studies. They identified papers that were partially or entirely funded by international agencies. They found that institutions in more than 68 countries and the European Union provided funding for more than 145 papers with at least one Brazilian researcher among the authors, largely in the fields of biochemistry and molecular biology, material science, and pharmacology. The US and Germany were the largest sources of international funding, with agencies from these countries supporting respectively 6.8% and 2.3% of articles co-authored by at least one Brazilian researcher in the period. Funds from the US came largely from the National Science Foundation (NSF), the leading funder of basic science in the country, and from National Institutes of Health (NIH), the country’s largest funder of life science research. Funding from Germany was largely provided by the Deutsche Forschungsgemeinschaft (DFG), the country’s foremost research funding agency.

The survey also measured the level of impact of articles with Brazilian authors depending on the funding agency, based on whether they were published in the top 25% (Q1) most influential journals. They found that 37.8% of the 455,766 Brazilian-funded papers were published in Q1 journals from 1999 to 2019. Although they funded roughly half of Brazil’s research output, less than 40% of the papers funded by CAPES and CNPq were published in high-impact journals. This figure is significantly higher for internationally funded articles (see the table).

Abílio Baeta Neves, a social scientist at the Office for Academic Affairs at PUC-RS and one of the authors of the study, says the stronger performance of research funded by international agencies should be viewed with caution and without assuming that the higher impact of internationally funded research is a result of a more rigorous selection process—“as if Brazilian institutions,” he says, “are not rigorous enough in selecting projects with the potential for high impact.”

Brazil’s international collaboration index has nearly doubled in the last decade, from 24.18% in 2009 to 40.55% in 2019, according to a study published in Scientometrics in 2020. Meanwhile, the linkage between international collaborations and high impact has been further corroborated by recent research. Physicist Carlos Henrique de Brito Cruz at the University of Campinas (UNICAMP), who previously served as scientific director at FAPESP from 2005 and 2020, surveyed articles with up to 10 authors in WoS-indexed journals between 2015 and 2017, and found that citations of Brazilian papers tend to increase when they are produced in collaboration with researchers in other countries. The impact of these papers also varies depending on the countries involved in the collaborations (see Pesquisa FAPESP issue no. 289). “This means that not only the type of funding but also the field of research, the number of authors and their country of origin or home institution need to be taken into account in these types of surveys,” says Jacqueline Leta, a biologist at the Federal University of Rio de Janeiro’s (UFRJ) Institute of Medical Biochemistry.

There are other limitations in the data that need to be factored in. The study was based on information about sources of funding taken from the footnotes of research papers. “The problem is that not all agencies in Brazil require researchers to cite the funding they received in their papers, so the available scientometric data can create a skewed picture,” explains McManus. The Bahia State Research Foundation (FAPESB), for example, does not require funding acknowledgments in its instructions for researchers, and is not even included in the survey. Some Brazilian agencies have only recently required acknowledgments as a condition of awarding grants. FAPESP has required researchers to include acknowledgments in their papers since 2013, and CAPES since 2018. “Several CAPES-funded publications may have been left out of our sample,” notes McManus. “There are also cases where institutions require acknowledgments in their grant agreements with researchers, but have failed to enforce those requirements,” adds Samile Andréa Vanz, a professor at the Federal University of Rio Grande do Sul’s (UFRGS) School of Library Science.

Antonio Gomes de Souza Filho, a researcher in the Department of Physics at the Federal University of Ceará (UFC), sees yet another complicator in measuring the true impact of each agency on Brazilian ST&I performance. He notes that researchers are often funded by multiple institutions during the course of their careers, and their current papers are often the result of cross-funded research, or build on previous research funded elsewhere. “Scientists in Brazil frequently use funding from agency A to explore research questions stemming from projects sponsored by agency B, which they conducted using infrastructure purchased with funds from agency C and in collaboration with master’s, doctoral, and post-doctoral researchers funded by agency D,” he explains. “Multiple Brazilian funding agencies have played a role in training the country’s researchers, but are not credited for the visibility and impact of papers those researchers publish years later with funding from international agencies.”

Leta also believes that the study’s failure to classify the research funding into different categories makes the data difficult to interpret. “I reckon that most grants listed as having been provided by Brazilian agencies were master’s, doctoral, and post-doctoral grants, while those funded by international agencies were largely research grants. These are two very different types of funding and cannot be compared directly,” says Souza Filho, who specializes in scientometrics. To compile more accurate attribution data and make more accurate comparisons, the data would need to be refined to exclude references to training grants and include only research grants. “The performance of Brazilian funding agencies in terms of paper counts, especially in the case of CAPES and CNPq, would be much worse if we accounted for only research grants, just as citation rates would change if we excluded graduate grants.”

Neuroscientist Luiz Eugênio Mello, scientific director at FAPESP, concurs. “The chart presented in the paper is insightful, but should be viewed with caution as it is comparing different types of funding,” he says. “It’s apples and oranges,” he continues, “since, overall, CAPES and CNPq provide many more junior researcher and graduate grants than any single state funding agency, or even all state agencies combined.”

Despite its limitations, the Scientometrics paper provides food for thought on strategies for research funding in Brazil. For Baeta Neves, “the data on the impact of papers funded by Brazilian agencies suggests that local agencies are still more concerned with expanding Brazil’s research output than they are with funding research projects with high international impact. They fund large numbers of papers, but their impact is only average,” he says. He believes that strengthening the country’s ST&I capabilities was important in the past and, to a certain extent, is still needed in many regions. “But at some point we will have to ask ourselves whether it’s time for Brazil to move to the next level and prioritize research quality to improve our international performance.”

For Souza Filho, Brazil needs to build a more balanced ST&I ecosystem that accommodates research with different profiles and goals. To create such an environment, however, will require that priorities are set and funding is consistently available. “When too many sectors are prioritized, the ability of funding agencies to support them all is diluted—too many priorities really means no priorities at all,” he notes. Samile Vanz, of UFRGS, suggests that funding agencies should encourage more international collaborations, a natural pathway to achieve greater research impact. But he notes that it is often the case that local research efforts, while regionally relevant, will not attract interest from high-impact journals or collaboration partners in other countries. “But it’s still important to fund research addressing problems that matter in the context of Brazil.”