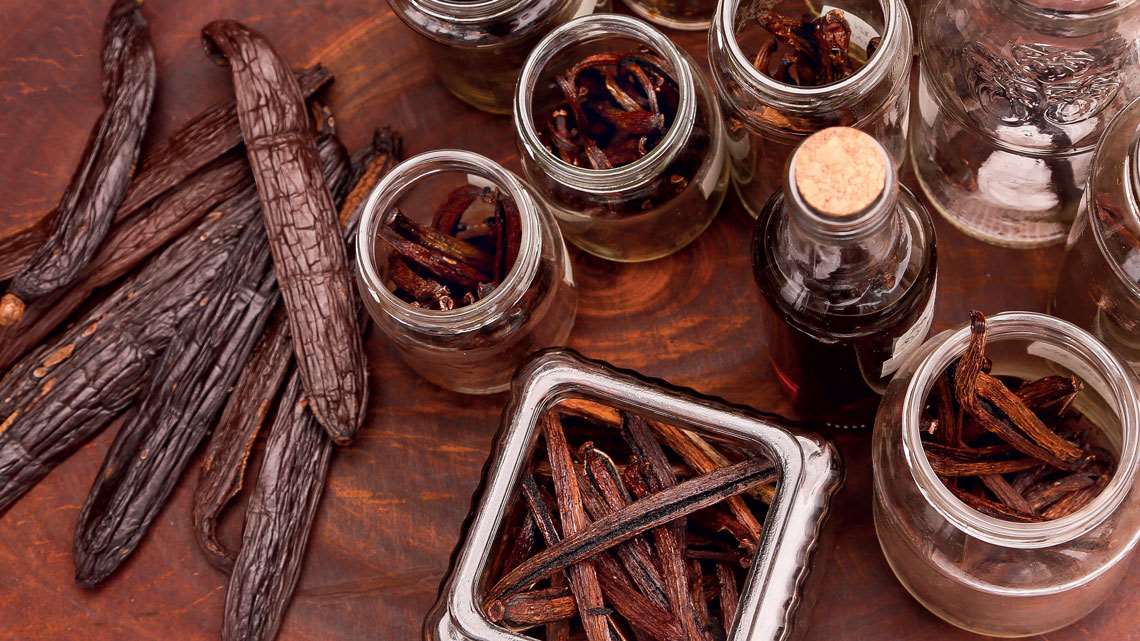 Have you ever tried ice cream flavored with Vanilla pompona, one of Brazil’s domestic vanilla species? The taste is fruitier and less sweet than similar imported species. Or maybe one made with V. bahiana, another native vanilla? On the table alongside these dishes, which are currently reserved for haute cuisine, there is a 20-centimeter-high bonsai with leaves that look like little hands—it is a wild species of Manihot, the cassava plant. If bonsais are not your thing, how about a vase of white, star-shaped flowers from the wild passion fruit, whose sweet and slightly acidic, pearl-colored pulp can be enjoyed with a spoon or used to make jam? The scene is anchored in experiments involving native plants from the Cerrado, Brazil’s wooded savanna biome.

On October 18, Danish chef Simon Lau Cederholm welcomed 13 guests at his restaurant in Brasília, among them eight researchers from the Brazilian Agricultural Research Corporation (EMBRAPA), to blindly taste seven types of vanilla ice cream, without knowing the main ingredients beforehand. They were made with vanilla pods from two cultivated species—one imported from Madagascar and the other from French Polynesia—and two wild species from the Cerrado—V. pompona and V. bahiana, both brought from the city of Goiás or Goiás Velho, the former state capital. The pods were prepared via a range of curing methods. Most of the guests preferred the taste and aroma of the ice cream with V. pompona cured in sugar, the traditional method adopted by Goiás locals since the arrival of the Europeans some 200 years.

After preparing and serving the ice creams with the chef, gastrologist Claudia Nasser Brumano took home the used pods of the native species and blended them in a food processor to make a paste that served as the base of a sauce for meats and jams. “The French often use only the seeds, but in Brazil we use the entire pod to explore its flavors and aromas,” she says. Brumano uses dried, ground vanilla pods to enrich the smell and taste of coffee. 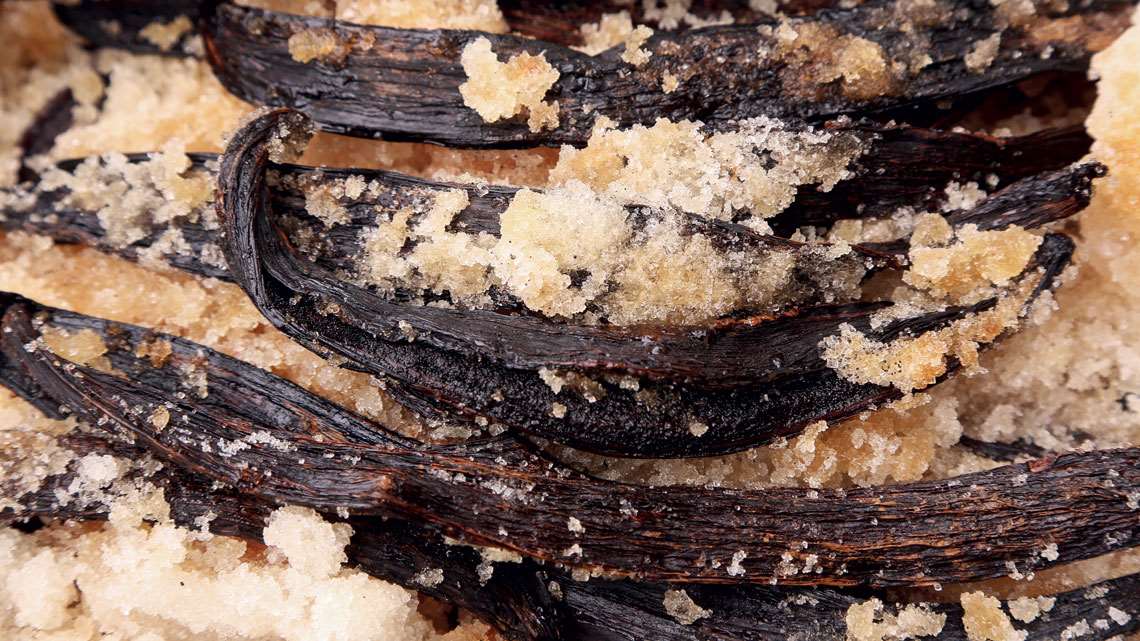 Together with EMBRAPA biologist Luciano Bianchetti and researchers from other institutions, she is working on making Brazilian vanilla viable. After a public call for proposals issued by the Brazilian Ministry of Agriculture, Livestock and Food Supply (MAPA), they will identify the areas of the Cerrado where native species grow and select the most promising varieties for culinary, medicinal, or cosmetic use, as well as defining the best ways to cultivate them and then identifying people who might be interested in growing or using them.

Brazil is home to 35 orchid species of the vanilla genus, 20 of which are endemic and about 10 of which are capable of producing aromatic fruit. The standout is V. pompona, a vine commonly found in forests and backyards in Goiás and other central areas of the state. Its broad pods are just over half the length of V. madagascar’s, but almost twice the width; when dried, the former weighs 30 to 40 grams (g) and the latter about 3 g. Like other native species, it takes three years to flower, 8 to 10 months until it can be harvested, and another six months to cure. “If all the stages of pollination, cultivation, and curing are not properly followed, the vanilla will not develop the unique flavors and aromas that it is so renowned for,” explains Brumano.

The researchers used the samples they collected to set up a vanilla germplasm bank, which now contains 15 varieties of four species. EMBRAPA has a similar but bigger collection for peppers, which currently contains around 4,000 varieties of five domesticated species (suitable for commercial cultivation) and dozens of semidomesticated or wild ones, kept in cold storage in Brasília. 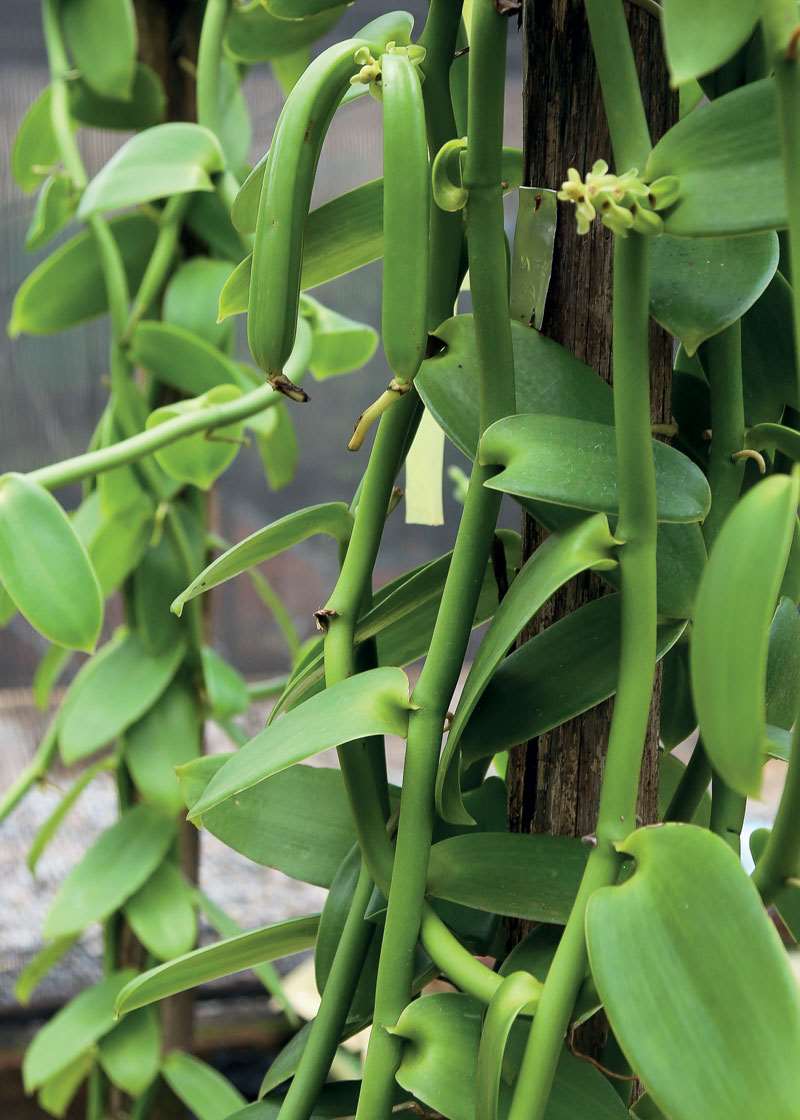 The germplasm banks of the 52 species in EMBRAPA’s genetic improvement program work the same way, gathering the most diverse possible range of sizes, colors, and tastes for each species. It is thus possible to crossbreed them—transferring genes from a wild species resistant to certain diseases to another that is susceptible but produces more fruit, for example—or to selectively breed wild varieties that produce smaller fruits with different shapes and colors or are easier to harvest than the original plants. In 2018, EMBRAPA used this strategy to create its 11th commercial variety (cultivar) of chili pepper, the Tui. The new cultivar was derived from the wild species Capsicum chinense, found in the Triângulo Mineiro region, and improved over successive generations to produce crunchy, sweet, non-spicy orange fruits—the original species bears red fruit. Bianchetti has participated in expeditions nationwide and helped identify four new species in the Atlantic Forest, three of which were described in the scientific journal Systematic Botany in December 2005 and the other in PhytoKeys in March 2020.

While peppers are most common in the Atlantic Forest, the Cerrado is dominated by cassava. Chapada dos Veadeiros, a region in the northeast of Goiás, is home to 10 endemic (exclusive) species; the Serra do Tombador, in the north, is home to another six; and there are four more in the Serra dos Pireneus, in the center of the state, according to a study published in Biodiversity and Conservation in April 2020. In the study, a team led by EMBRAPA biologist Marcelo Simon identified 75 cassava species in the Cerrado, of which 59 are endemic and 24 are at high risk of habitat loss.

“Although they are not used as food by people, wild species can be useful in genetic improvement programs, since they can contain genes that provide resistance to diseases or drought,” says Simon. Wild species can also contain high levels of proteins or essential amino acids.

Manihot esculenta, a cultivated species of cassava with thick roots that are rich in starch and reaches lengths of up to 2 meters (m), forms the basis of the diet of around 500 million people worldwide. The difference from wild species is stark, reflecting thousands of years of domestication by Amazonian peoples. Some are trees up to 5 m tall, while others grow on other trees. To recognize plants in the genus, botanists sometimes need to macerate and smell the leaves—if it is a Manihot, it will give off a smell of hydrocyanic acid, which is extremely toxic to people and animals and serves to ward off predators. 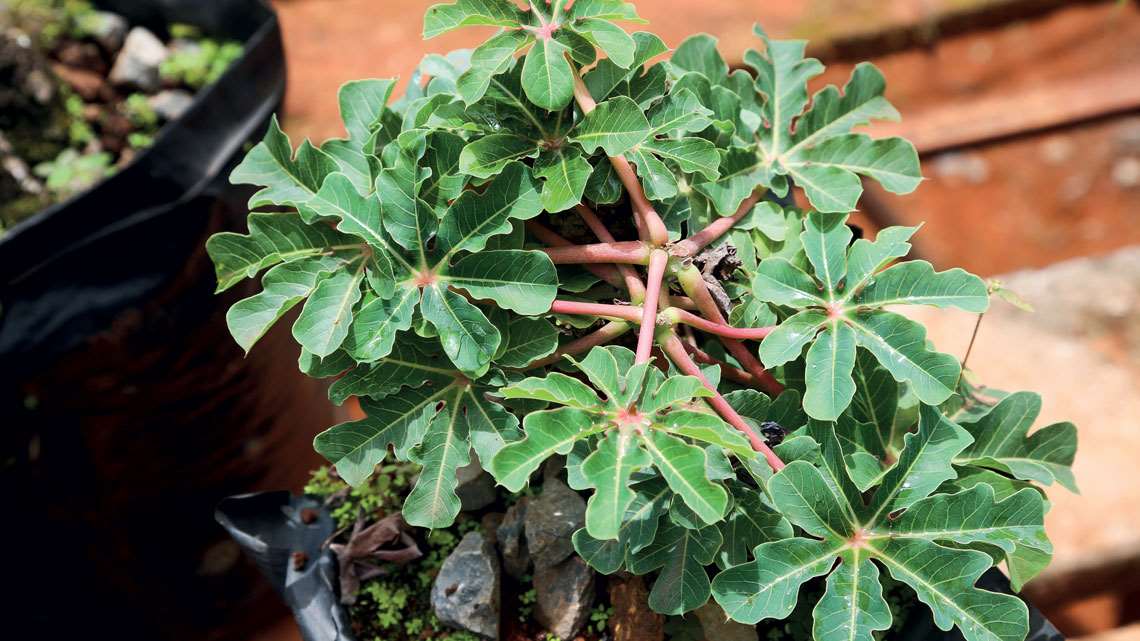 Despite this fact, tribes living in the Xingu Indigenous Reserve in the north of the state of Mato Grosso makes flour from several varieties with a high hydrocyanic acid content. Fabio Freitas, an agronomist from EMBRAPA in Brasília, has observed two methods used to eliminate toxicity: “The Kayabi leave the cassava in river water for two or three days, then open them by hand and place them in a sieve called a tapiti to remove the hydrocyanic acid before drying it in a pan over a fire. The Kamayurá, on the other hand, use two varieties for different purposes. One is used to make a type of drink by grating, sieving, and boiling it. The other is grated, dried in the sun, and then cooked over a fire on a ceramic plate to make biju, a type of bread.”

“Smaller wild species are very beautiful and have great ornamental potential,” says Simon. He keeps some naturally small, bonsai-like varieties, 20 to 30 cm tall, in pots in a greenhouse at one of EMBRAPA’s units in Brasília.

Many varieties are kept as in vitro tissue cultures, “each with different nutritional requirements that we have to discover,” says Carlos Ledo, an agronomist at EMBRAPA in Cruz das Almas, Bahia. He was one of the coauthors of the paper on endemic species in the Cerrado, and returned this year to the team working on genetically improving the cassava.  In addition to renewing and expanding the collection, which currently has around 200 samples of 20 species, he intends to crossbreed the varieties—not an easy task, given that the cultivated variety is primarily propagated by burying cuttings with each new harvest, while wild plants reproduce from seeds that form in flowers pollinated by insects. 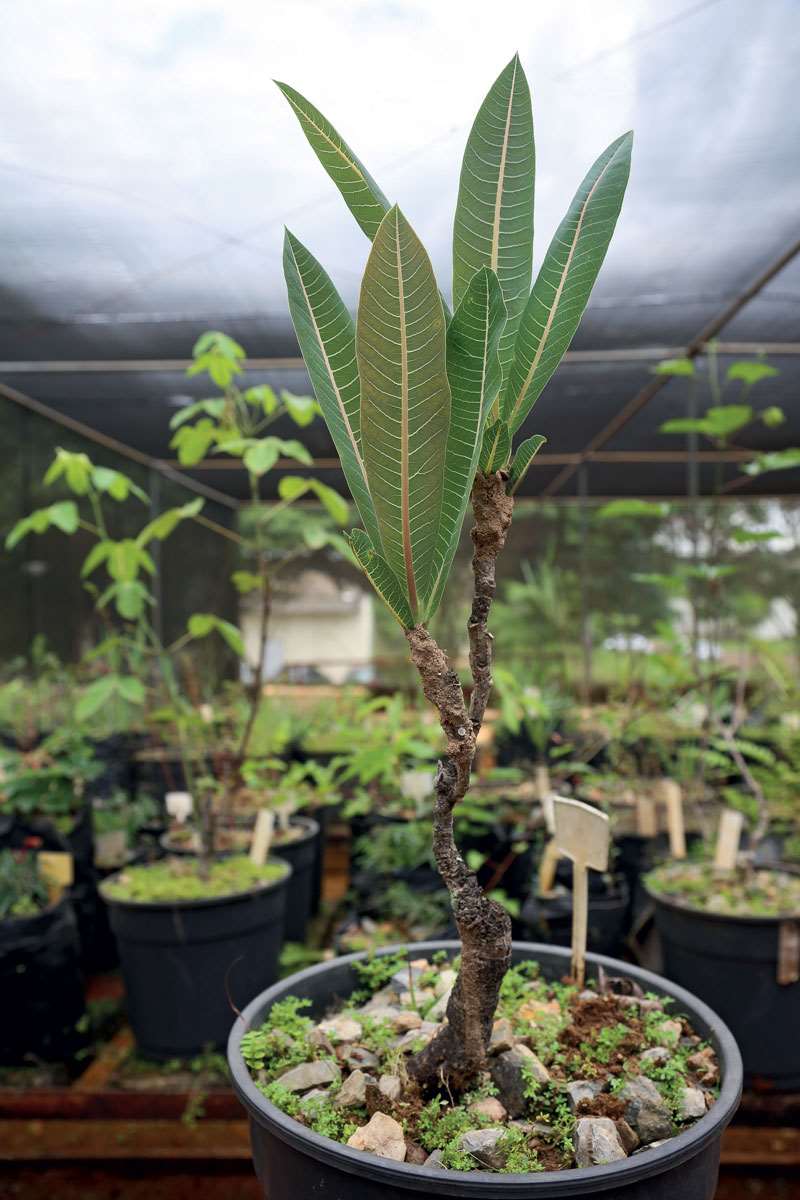 … and another larger variety from an EMBRAPA germplasm bankSergio Dutti

While wild cassava species tend not to interbreed, wild passion-fruit species are more amenable to one another. “The compatibility between different species greatly facilitates crossbreeding and genetic improvement,” says Fábio Faleiro, an agronomist from EMBRAPA Cerrados in Planaltina, Federal District, and lead author of the book Banco de germoplasma de Passiflora L. ‘Flor da paixão’ (“Passion flower germplasm bank” – EMBRAPA, 2020). Of the 525 known species of the Passiflora genus, 145 are found in Brazil, of which 85 are endemic, 70 bear edible fruit, and 50 have commercial potential as food, medicinal compounds, or ornamental plants.

Based on research into genetic improvement of the species that began in the 1990s and three banks that currently hold some 600 samples of 70 species, EMBRAPA has developed 11 commercial varieties since 2008, including 4 sour passion fruit varieties and 5 ornamental plants, cultivated mainly by small farmers and sold as specialty products.

Three other varieties are currently undergoing the licensing process for companies that produce and distribute seedlings and seeds. The first is a variety of P. tenuifila, a wild species from the Cerrado that has been named BRS Vita Fruit. It is used medicinally because it contains substances that strengthen the central nervous system, as well as for food due to its sweet flavor with a hint of garlic, which can be used in soups, breads, and other savory dishes. The second is the giant granadilla, the result of improvements to P. quadrangularis, which grows in the forests of the Cerrado, the Atlantic Forest, and the Amazon, and reaches a weight of 3 kg, from which not only the pulp can be eaten, but also the mesocarp—the layer between the skin and the seeds. The third is the bell apple, derived from P. nitida, another wild species from the Cerrado, whose skin is easily detached from the mesocarp.

Lined up for the near future are three red pulp hybrids, the result of crossbreeding the wild species P. caerulia with the commercial species P. edulis. “Almost 30 years of genetic improvements are bearing fruit,” exclaims Faleiro.

BRS Pérola do Cerrado, a variety distributed to producers since 2013, was developed via genetic improvements to the wild species P. setacea that began in 1995. “It is a hardy plant because of its high resistance to pests, unlike the species P. edulis,” says Faleiro. Other differences: P. setacea has a whitish pulp and entirely white flowers that open at night and are pollinated by moths, while P. edulis, has a yellow pulp and white flowers with a purple inner ring that open during the day and are visited by bumblebees.

Ice cream shops in Mato Grosso, Goiás, and other states in central Brazil use regional fruits, such as pequi, cagaita, mangaba and caja-manga, but “there is a huge diversity of wild species from the Cerrado whose culinary and gastronomic potential is still unknown to most people,” says Rafael Oliveira, a botanist from the University of Campinas (UNICAMP) who did not participate in the research. Some are beginning to win over the national market, such as pineapple, cashew, guava, pitanga, and various nuts and spices, but others are at risk of disappearing due to agricultural expansion.

“In Brazil and other countries, there is still a misconception about the Cerrado, which is seen as an irrelevant type of vegetation,” explains Oliveira. “The focus of environmental conservation is on the Amazon. If we do not take action, we could silently lose one of Earth’s great treasures of biodiversity.”