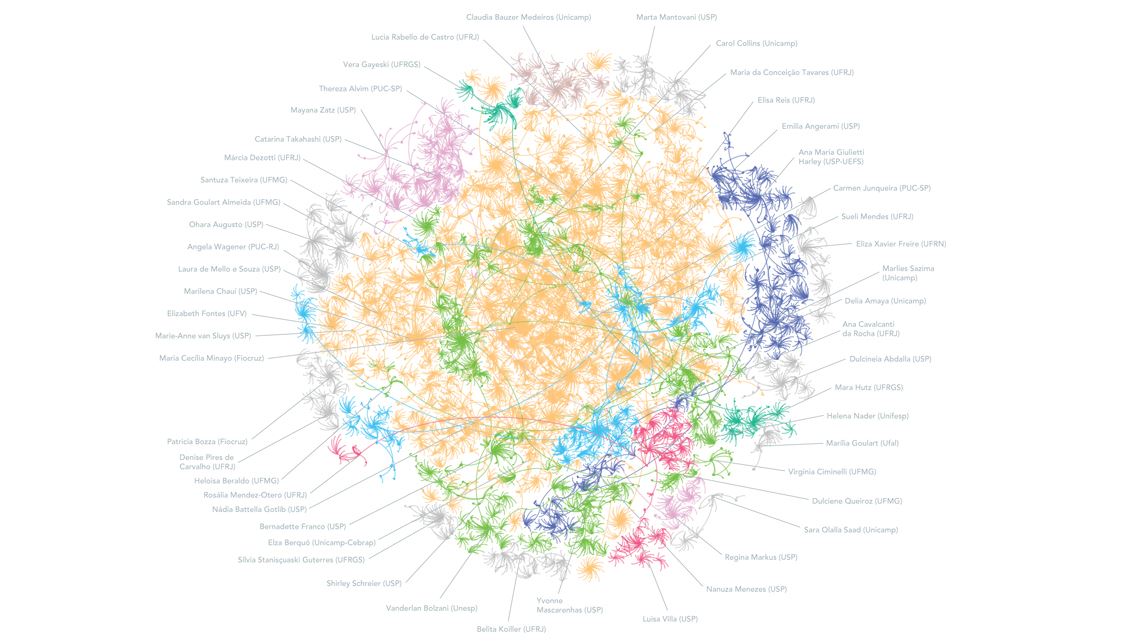 A diagram published on social media has sparked a debate about a type of contribution made by women scientists that is rarely addressed in gender studies: their role in advising students and training new generations of researchers. The image, which resembles a treetop seen from above, is formed by graphs—structures made up of nodes connected by lines—whose branches represent the networks of members of academia trained by 50 Brazilian female researchers. The work was produced and promoted on Twitter by immunologist Helder Nakaya, a senior researcher at Hospital Israelita Albert Einstein and exposed a dense and prolific academic legacy: the number of researchers these women directly advised (students) and indirectly taught (future generations taught by their students) totaled 32,000 researchers.

Some of the researchers mentioned in the project and their students shared and celebrated the results on social media. “It’s a privilege to see how many academic grandchildren and great-grandchildren I already have and how many great students I was able to train in research on the chemistry of natural products,” says Vanderlan Bolzani, from the Institute of Chemistry of Araraquara at São Paulo State University (UNESP), who has 169 academic descendants spread over three generations. She points out that academic genealogy data reveal how the work of women scientists, despite being influential, is not reflected by other indicators. “To train good researchers, it is necessary to carry out quality science, guarantee funding for projects, establish international collaborations,” she states. Bolzani observes that, even though they train many people, women continue to struggle to obtain recognition, and few of them reach high positions. A 2018 study showcased that, of the 518 full members of the Brazilian Academy of Science (ABC), only 14% were women. Of the 67 deans linked to the National Association of Directors of Federal Institutions of Higher Education (ANDIFES), only 13 are women.

Bolzani, who is also a member of the FAPESP Board of Trustees, believes data on the contribution of women to the training of human resources are especially relevant at this time when scientists are discussing how to achieve the United Nations Sustainable Development Goals (SDGs). “Gender balance is one of the goals to be achieved,” she points out.

“I was surprised by these results, because I hadn’t realized I had trained so many students,” ponders Belita Koiller, from the Physics Institute of the Federal University of Rio de Janeiro (UFRJ). The first female physicist elected as a full member of the ABC and winner of the 2005 L’Oréal-UNESCO For Women in Science Award, Koiller has 11 direct descendants and 124 indirect descendants. The most important part of this legacy, she stresses, is the quality of the researchers she has mentored. “I tried to train better scientists than myself. I made sure they all studied abroad,” she shares. She regrets that physics lags behind other fields when it comes to its capacity to attract more female talent and enable them to flourish. But she believes that public recognition—such as the L’Oréal-UNESCO International Award she received and the L’Oréal-UNESCO-ABC Program that she helped implement in Brazil in 2006—break some of these barriers, giving more visibility to women scientists and reducing disparities.

Claudia Bauzer Medeiros, from the Institute of Computing at the University of Campinas (IC-UNICAMP), was told about Nakaya’s work by a former student. “I was flattered to be in such good company,” she said. She is still in touch with most of her students. “Of the 70 master’s and PhD students that I advised, I follow the careers of about 50. Last year, they held an online birthday party for me. People logged in from the United States, Australia, and England. I am proud to have trained quality scientists who now work in industry, academia, and research centers around the world,” says the researcher, who has 325 direct and indirect descendants. The first female professor in Brazil to get a PhD in computer science abroad, she encourages more women to enter the male-dominated field and, while president of the Brazilian Computer Society, she implemented initiatives to attract talent. “Today, nearly 20 years after its founding, the SBC has a permanent program—Meninas Digitais (Digital Girls)—through which thousands of young women aged 7 to 18 all over Brazil learn to write code, build robots, and develop projects with help from hundreds of dedicated teachers. It is a joy to have contributed to this.” Considering the reality of the situation in this field, she managed to attract a reasonable number of female students: of the 20 PhD students she trained, five are women; among her 53 master’s students, 16 are women.

Nakaya first decided to carry out the study out of sheer curiosity. He explored an academic genealogy database created by researchers at the Federal University of ABC (UFABC) as a means to facilitate a researcher discussion group via WhatsApp. He then traced the family tree of 19 scientists, showcasing how much they had contributed to the training of new researchers. He was criticized for how few women he included in his sample—of the 19 researchers, only two were women: geneticist Mayana Zatz, from USP, and biochemist Helena Nader, from the Federal University of São Paulo (UNIFESP). He noted that their contribution was not far behind that of the men, including deans and leaders of large research centers. “So, I decided to gather data exclusively about women,” he shares. His choice of 50 female scientists followed somewhat subjective criteria. He looked up the names of researchers who were still alive in records like the one from the Brazilian Academy of Science and included some that were familiar to him. He was careful to include names from the human and social sciences, such as demographer Elza Berquó, from the Brazilian Center of Analysis and Planning (CEBRAP) and UNICAMP, and economist Maria da Conceição Tavares, from UFRJ. “Again, I was criticized, but for the women I failed to include. Everyone could think of an important name that had been left out,” he says.

Nakaya’s study was made possible thanks to a UFABC project that has, since 2016, enabled the mapping of academic genealogy based on data extracted from the Lattes curricula platform (see Pesquisa FAPESP issue nº 249). The Acacia Platform, which got its name from the shape of the branches of a tree native to Australia, includes data on 1.2 million Brazilian academics, listing their number of descendants, how many generations they have trained, and the number of “cousins,” or researchers who share the same academic “grandparent.” “We want to expand the data and the ways they can be searched on the platform,” says Jesús Pascual Mena-Chalco, from the Center for Mathematics, Computing and Cognition at UFABC and coordinator of the project. “Today, there is information available on the individual level. The idea is to enable analyses involving universities, investigating how they were influenced by other institutions—like UFABC, whose researchers come mostly from USP—or pointing out areas and fields of knowledge that have provided human resources to other areas.”

He shares that the database has supported studies on academic genealogy and has been referenced by researchers interested in tracing the impact of their work on generating human resources. “The platform allows for various interpretations about academic careers, as illustrated by the study on the 50 Brazilian female researchers,” he says.

Nakaya’s study has generated further research. The immunologist has partnered with the Institute for the Appreciation of Education and Research in the State of São Paulo (IVEVESP), a non-profit organization established by professors and scientists to create or improve the profiles of the 50 female researchers on Wikipedia. To achieve this objective, he intends to seek the help of each researcher’s academic descendants. The Wikipedia entries are written using reliable information available online, and the biologist’s goal is to produce pages that support the researchers’ profiles. “And we would like their former mentees to help us narrate the contributions of these scientists,” he says. Physicist Helio Dias, director of IVEVESP and a retired researcher at the USP Institute of Physics, plans to hire fellows to help conduct interviews and gather data on the women being profiled. Yvonne Mascarenhas, from the USP São Carlos Institute of Chemistry—one of the 50 researchers on the list—is also willing to help.

The initiative resembles a project carried out by British physicist Jessica Wade, from Imperial College London, with the goal of addressing the lack of female profiles on Wikipedia. Alongside journalist Angela Saini, Wade started a project in 2017 called “One scientist per day on Wikipedia”—an effort to expand the number of biographies of women researchers from different countries. They have already written about hundreds of women (see Pesquisa FAPESP issue nº 276). In at least one case, the project being developed in Brazil overlapped the British one. Helena Nader, from UNIFESP, was one of the women profiled in English by Wade and Saini. “Jessica Wade participated in a 2019 debate with me at the Museum of Tomorrow, in Rio de Janeiro, about women in science. She looked for my Wikipedia profile and couldn’t find it. So, Angela Saini wrote one,” recalls Nader. According to the Acacia Platform records, Nader already has 497 descendants, 66 of whom are direct descendants.