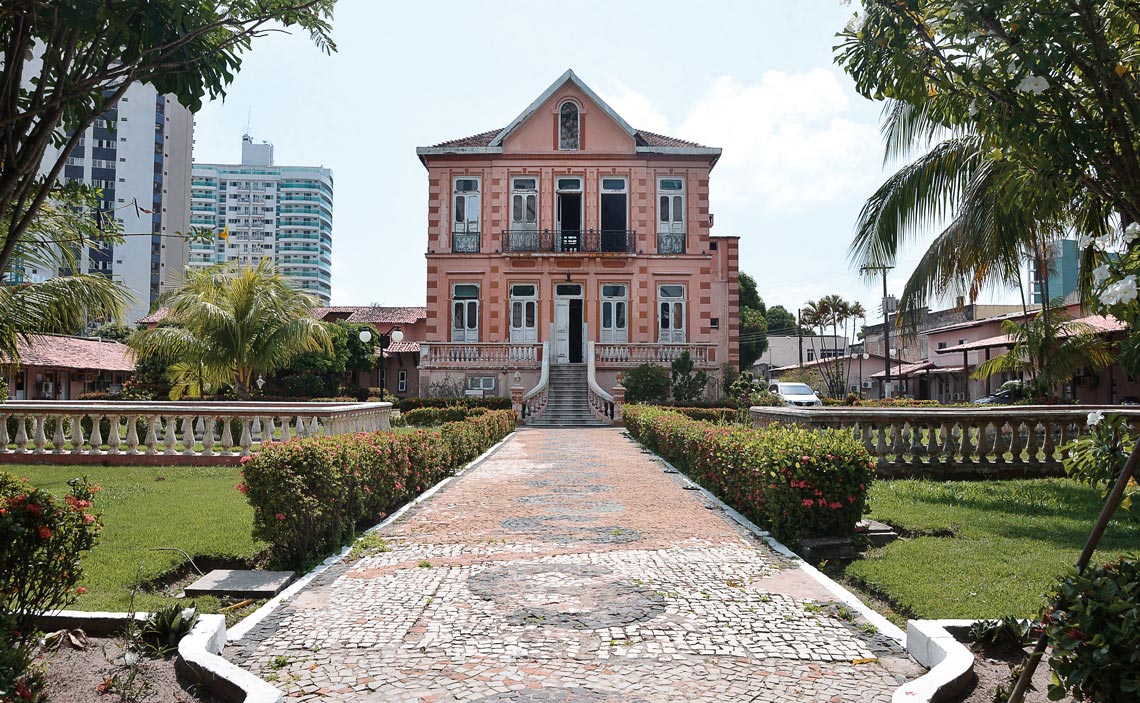 The mansion that originally housed the institute at Avenida Almirante Barroso, in Belém

The heavy and extended rainfall in February this year, one of the rainiest months in the Amazon, caused a huge tailings holding pond operated by Alunorte—an aluminum mining company owned by Norwegian group Norsk Hydro—in the municipality of Barcarena, Pará, to overflow. The deposit, measuring almost 1 kilometer (km) across, contained a reddish slurry with elevated levels of caustic soda and heavy metals released from the bauxite beneficiation process. The incessant rainfall led the large open pond to overflow, causing brick-colored mud to spill into two neighboring communities, Vila Nova and Bom Futuro, and into streams and drinking-water wells. The tailings also washed into the Pará River, which drains the surrounding area and traverses Belém 40 km east of the site before reaching the Atlantic. After receiving complaints from the community, the State Prosecution Service and the Federal Prosecution Service engaged researchers from the Evandro Chagas Institute (IEC) to assess the environmental impact and the potential human-health risks from the tailings.

Chemist Marcelo de Oliveira Lima and his team at the IEC’s Environment Department (SAMAM) tested water samples collected from streets, streams, wells, and the company’s operations yard and found they contained levels of aluminum and other metals well above acceptable limits, and were highly alkaline. In their report, the researchers recommended distributing drinking water to communities and monitoring water quality in the affected area for the duration of the rainy season. Alunorte hired an independent firm and challenged the IEC’s findings, although later admitting in a press interview that clandestine pipes had been used to discharge tailings and untreated effluent into the environment.

The environmental incident earlier this year is just one of many that SAMAM has been tasked with investigating. Created in 1992 by virologist Elisabeth de Oliveira Santos, SAMAM is the youngest of the eight scientific departments that make up the institute—the most important center for research and treatment of tropical diseases and for environmental health in the Amazon.

Over the past two and a half decades, researchers at SAMAM have studied the health effects on riverine and indigenous communities from exposure to mercury—which is used in mining but is also naturally occurring in the environment—and waterborne infectious agents. The research team also performs water testing in the North, Northeast, and Midwest of Brazil as part of the Ministry of Health’s agrochemical monitoring program. In 2008 they investigated an incident in Barcarena and found that Imerys, a French company producing kaolinite—an aluminum-rich ore used for paper bleaching—had dumped untreated effluent into streams in the area, making their waters acidic and lifeless. “The water in some of the streams was as clear as a swimming pool, unlike the sediment-rich waters that are typical of this part of the Amazon,” recalls chemical engineer Bruno Carneiro, deputy head of SAMAM. 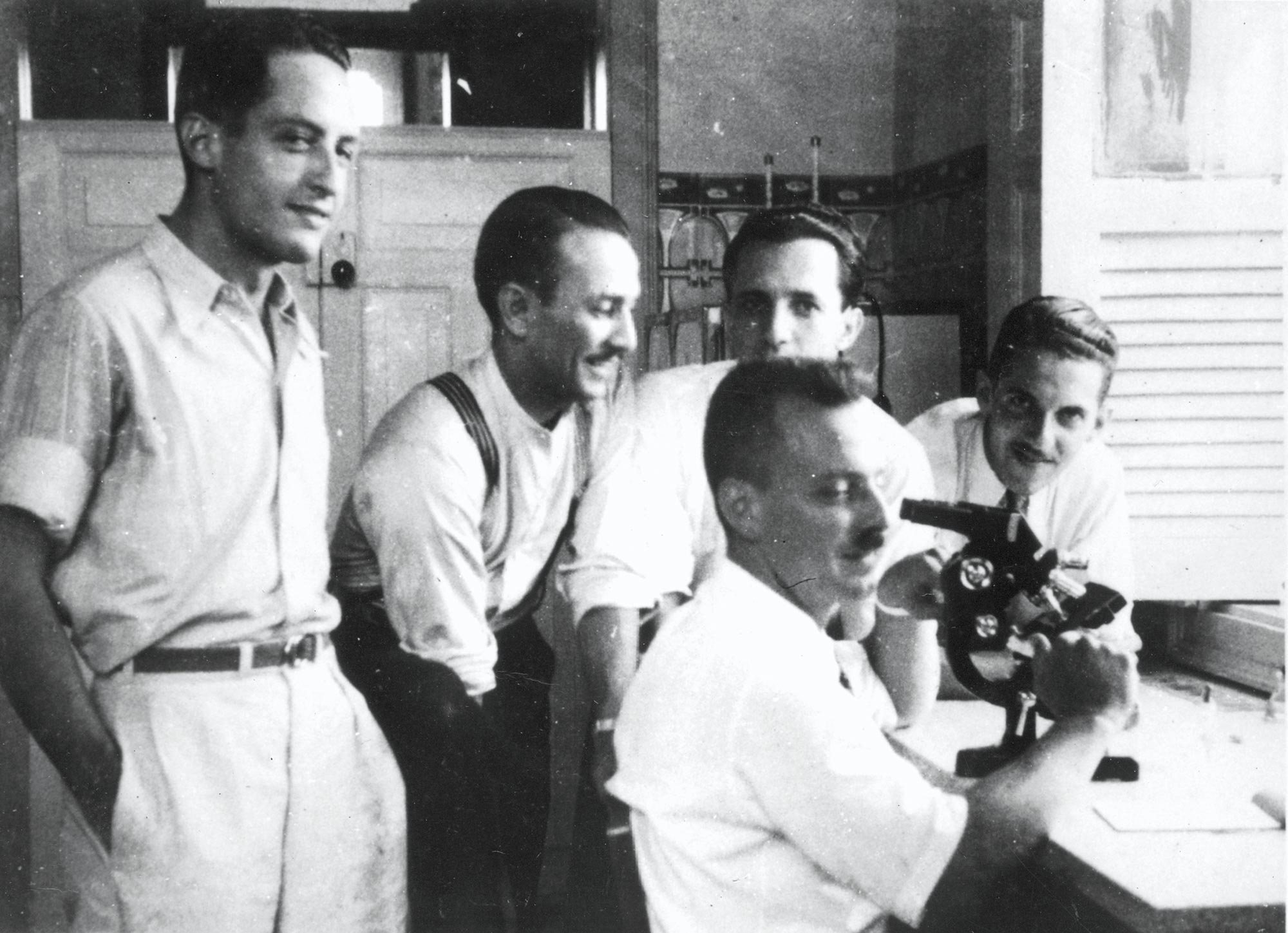 This department was one of the first to be set up at the IEC campus in Ananindeua, a town near Belém. The 70-hectare compound houses nearly 30 laboratories operated by seven of the institute’s eight research departments, as well as healthcare departments where nearly 25,000 medical tests are performed and 4,700 diagnoses of tropical diseases are made every year. Located on the BR-316 interstate highway—which stretches from Belém to Maceió, the state capital of Alagoas—the campus also hosts an associate program in medical testing and three graduate programs: a master’s degree program in epidemiology and health surveillance, and a master’s and doctorate program in virology. The Hepatitis Department is the only department remaining at the original IEC building, an old mansion in Belém at 492 Avenida Almirante Barroso, a distance of 15 km from Ananindeua.

It was there in 1936 that Evandro Chagas (1905–1940), a 31-year-old physician and researcher from Rio de Janeiro, set up Brazil’s first center for health research in the Amazon: the North Institute for Experimental Pathology (IPEN). Two years earlier, a fellow physician from Rio, Henrique de Azevedo Penna, had identified the first cases of visceral leishmaniasis originating in Brazil. With support from the Rockefeller Foundation, Penna had investigated cases of yellow fever in Bahia, analyzing a total 47,000 slides containing liver tissue samples. In 41 samples that were negative for the yellow fever virus, he found the parasite causing visceral leishmaniasis, or Kala-Azar, which was then thought to be transmitted only in India and the Mediterranean. Most cases were in the Northeast and North of Brazil, Penna reported in the journal Brasil Médico in November 1934. The then director of the Oswaldo Cruz Institute in Rio de Janeiro, physician Carlos Chagas (1879–1934), who discovered the disease bearing his name, organized a commission to investigate leishmaniasis cases in Brazil. The mission was tasked to his eldest son, Evandro (see Pesquisa FAPESP issue no. 120).

In 1936 Evandro Chagas traveled the Northeast to investigate cases of the disease and tried, unsuccessfully, to convince local authorities to set up a laboratory for research on visceral leishmaniasis. This form of the disease is caused by a unicellular parasite, the protozoan Leishmania infantum chagasi, which lodges in the body’s defense cells and damages the spleen, liver, and bone marrow. If left untreated, most cases result in death. “In Maranhão, Evandro Chagas was preparing to return to Rio when during a farewell ceremony organized by local authorities he met a physician from Pará who convinced him to go to Belém,” said virologist Pedro Vasconcelos, the IEC’s current director, in an interview with Pesquisa FAPESP.

The commission for research on visceral leishmaniasis was initially set up nearly 100 km west of Belém, in the rural area of ​​Abaetetuba, where Penna had earlier collected positive samples. In an article published in Science in October 1936, Evandro Chagas reported that cases in Brazil were similar to those in Asia and that the majority (70%) of patients were children aged 10 or younger. “When he met Chagas, Governor José da Gama Malcher was enthusiastic and agreed to found the institute with financial and technical support from the government,” Vasconcelos says. 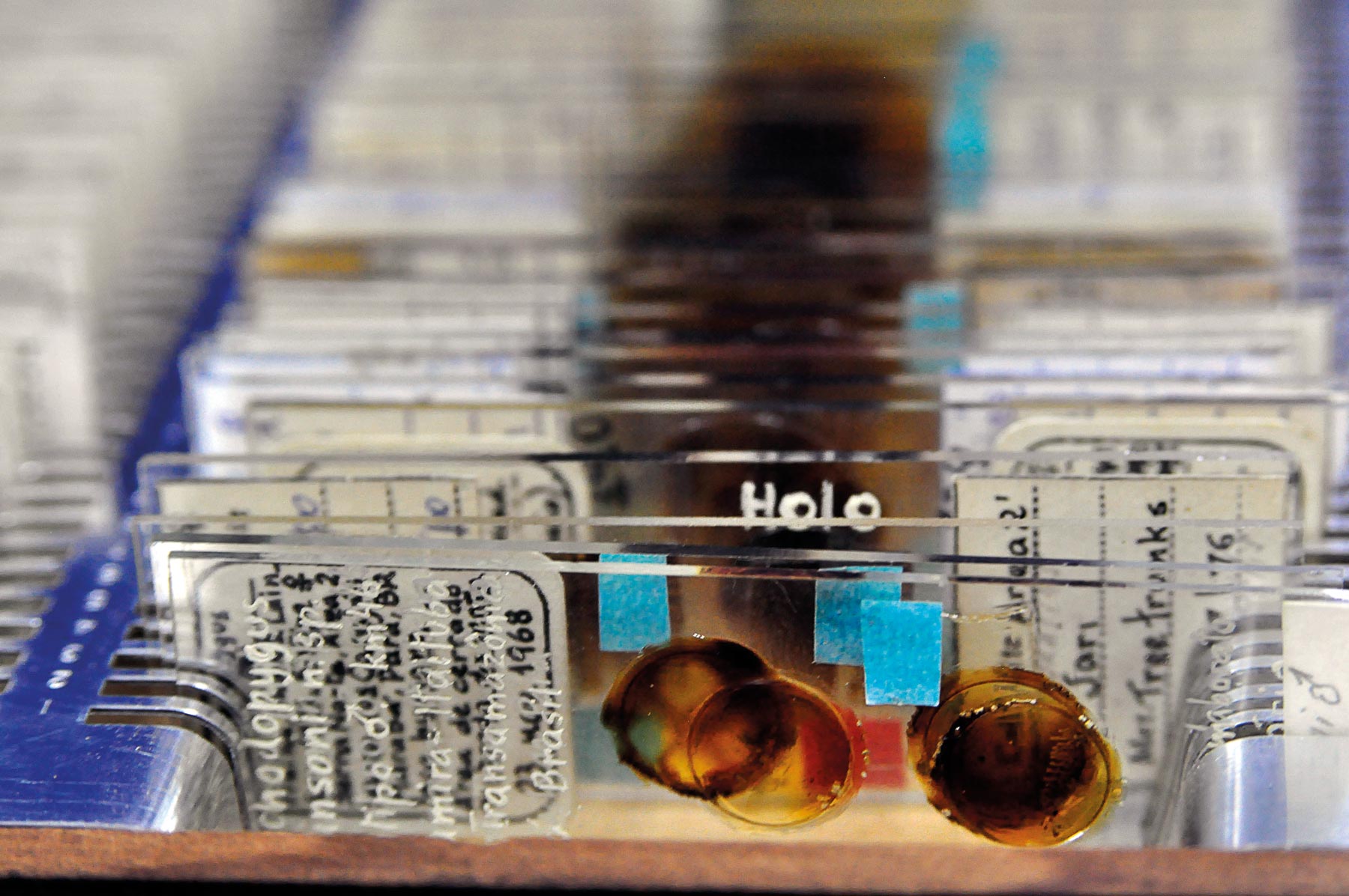 A state act promulgated on November 11, 1936, decreed the creation of the IPEN, which Evandro Chagas soon staffed with young physicians and pharmacologists from the Pará School of Medicine and Surgery (now the Federal University of Pará). The institute’s mission was to investigate the frequency and distribution of visceral leishmaniasis in the Amazon and identify the insects carrying the parasite—physician and entomologist Octávio Mangabeira Filho (1912–1963) described 40 of the nearly 400 Brazilian species of phlebotomine flies, which transmit the leishmaniasis protozoan when feeding on blood. Chagas then decided to investigate other diseases frequently occurring in the Amazon.

In 1940 the institute took part in a campaign against malaria in the Northeast, where it set up a laboratory to diagnose the disease and identify its insect vector, the mosquito Anopheles gambiae. A prominent member of the research team was American entomologist Otis Causey. Subsequently, on commission from the then Ministry of Education and Health, IPEN researchers undertook field expeditions to map out the occurrence of malaria in Pará and Amazonas as part of efforts in support of president Getúlio Vargas’s program to further integrate the North and Midwest with the rest of the country. In November 1940, at age 35, the carioca physician was killed in an airplane crash en route to São Paulo. The governor of Pará paid tribute by renaming the IPEN after Evandro Chagas.

Following the untimely death of its founder, the institute lost many of its researchers amid a financial crisis. In 1942 it became part of the Federal Government’s Special Public Healthcare Service (SESP). Then, in 2000, the IEC came directly under the auspices of the Ministry of Health. Under an agreement between the Brazilian and US governments, SESP was tasked with advancing sanitation in “areas producing raw materials strategic to US military interests, such as rubber from the Amazon, and iron ore and mica from Vale do Rio Doce,” researchers Rogério Renovato and Maria Helena Bagnato report in a 2010 article in Educar em Revista. The agency also provided healthcare to workers and training to health practitioners.

An important addition came in 1954 when, after considering several provincial capitals in Brazil and other Latin American countries, the Rockefeller Foundation decided to fund the creation of a center for virology research in Belém. The foundation appointed Otis Causey as head of arbovirus research with his wife, Calista Causey, as a volunteer assistant, who was later succeeded by Robert Shope (1929–2004), Amélia Travassos da Rosa (1937–2017), and Francisco de Paula Pinheiro. The center was set up within the IEC and was the precursor of the current Department of Arbovirology and Hemorrhagic Fevers, which investigates insect-borne viruses such as yellow fever, dengue, Zika, and chikungunya. In just over six decades, 220 virus species in the Amazon have been isolated and classified, of which at least 110 were previously unknown and 36 cause disease in humans. 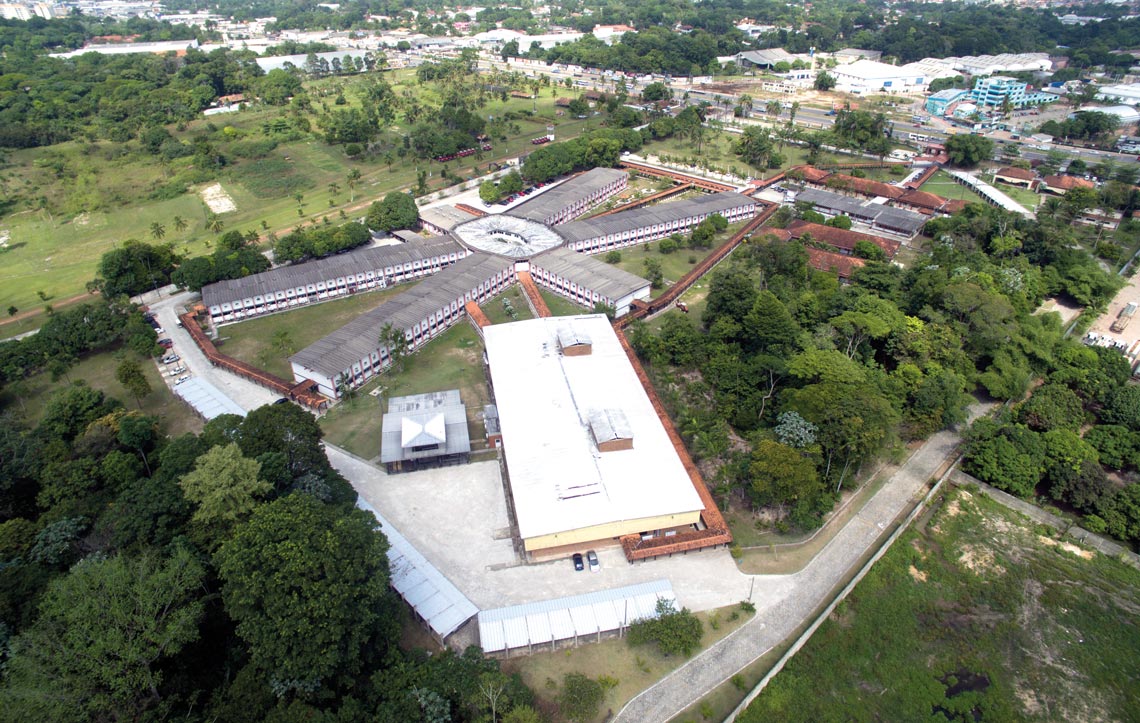 An aerial view of the IEC campus in AnanindeuaIEC

The Department of Arbovirology and Hemorrhagic Fevers, which accounts for a majority of the almost 80 scientific articles published by IEC researchers in the last two years, has two laboratories with a biosafety level 3 rating—one below the highest protection rating—used for handling potentially lethal infectious agents. It was at one of these labs that in 2015 the Zika virus was first isolated in the brain of an infant with microcephaly (see interview on page 28). A laboratory dedicated to animal experiments has tested a Zika vaccine developed by researchers at the IEC and the University of Texas.

In the mid-1960s, a collaboration between SESP, the Wellcome Trust, and the London School of Hygiene and Tropical Medicine, in England, funded grants for parasitologists Ralph Lainson (1927–2015) and Jeffrey Jon Shaw to initiate research on cutaneous leishmaniasis in Brazil. This form of the disease, the most common in the country, causes skin lesions and can destroy mucous membranes and cartilage.

The IEC also does research on other diseases caused by viruses, bacteria, and fungi, and breeds approximately 25,000 rodents each year for use in disease research and in preclinical trials at Brazilian research centers. Since 1978, the IEC has also hosted the National Primate Center (CENP), where 25 native ape species from the Americas and one from Africa, many of them threatened, are kept for conservation and research purposes.

With around 100 researchers and 500 staff, the institute is funded out of an annual budget of around R$70 million provided by the Ministry of Health. Another R$40 million is sourced from state and federal funding agencies for research. During Pesquisa FAPESP’s visit to the IEC in September this year, physician Fernando Tobias Silveira, a leishmaniasis expert and deputy director at the institute, expressed concerns about the institution’s future.

The institute has around 100 researchers and 500 staff. It receives an annual budget of R$110 million

While health consultations, medical testing, and research activities have all increased in recent years, so has the risk that the institution could soon face a shortage of trained staff. Between 25% and 30% of researchers and staff are old enough to retire, and the most recent competitive examination for new hires was organized almost 10 years ago. “We were then on the verge of collapse, but were able to hire about 300 people,” says Silveira. “We would need another 200 to keep up with the current pace of work.”

But despite its staffing woes, the IEC has also had good news. This year it secured R$2 million in funding to renovate the Almirante Barroso mansion. After a complicated bidding process for the works, the problems seem to have been left behind. If all goes as planned, within the next few years the original IEC building will become home to the Evandro Chagas Museum.