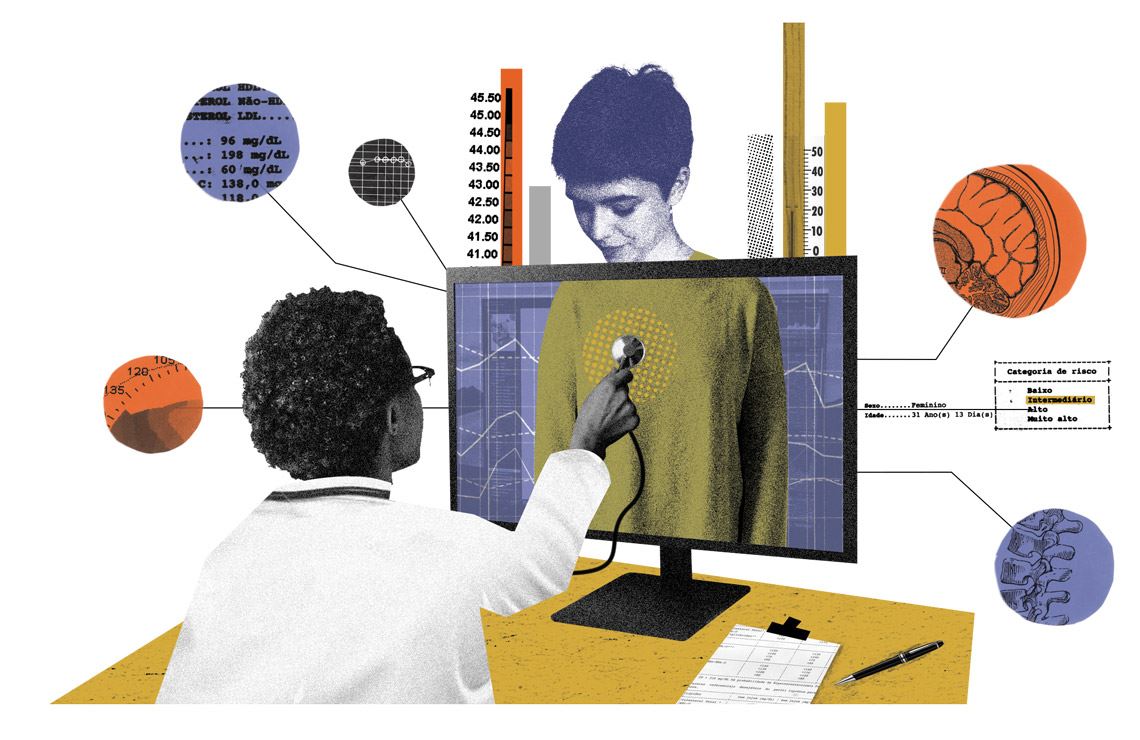 Telemedicine is growing in importance in the health sector—alongside other technologies such as artificial intelligence, wearables, and 3D printing, it is considered by scientists around the world as one of the great transformations in medicine, with vast potential for development over the coming decades. “Doctors and patients will soon get used to remote, online healthcare, which still evokes feelings of trepidation here in Brazil,” says Chao Lung Wen, head of the telemedicine discipline at the University of São Paulo School of Medicine (FM-USP).

Training doctors in this area has become more urgent since March, when the Brazilian Ministry of Health published new regulations on the use of telemedicine for consultations between doctors and patients during the COVID-19 pandemic.

Remote healthcare via telemedicine has become more viable as the use of electronic devices connected to the internet has grown. The practice, however, involves more than simply holding patient consultations via video calls. “In a video consultation, as well as investigating the patient’s symptoms, a physician can perform a physical observation, assessing the patient’s behavior, breathing, movement, posture, and signs of injury,” says Wen.

In addition to being familiar with communication technologies and remote healthcare platforms, physicians need to understand the specific ethical aspects of this type of consultation, such as digital data storage, medical record updates, and summary forms for patients, as well as public perceptions of telemedicine in different regions of the country and technological infrastructure. On top of all this is the doctor’s ability to analyze a patient’s case history to identify their needs and formulate a diagnosis. “Physicians can even ask patients to show them parts of their body in order to observe injuries or their general condition, just like at a face-to-face consultation,” adds Wen.

Telemedicine disciplines are often offered at undergraduate and graduate level, as well as during medical residencies and on extension courses. There are few schools, however, where the subject is part of the core curriculum. At FM-USP, for example, the discipline is classified as an elective, meaning students can choose to study it if they have a particular interest in the area. “This is because most of the country’s health system is still very much focused on face-to-face care,” says Raymundo Soares de Azevedo Neto, from the Telemedicine Laboratory at FM-USP’s Pathology Department.

In Brazil, information technology started to appear on medical school curriculums in 1986. At FM-USP, the discipline of medical informatics, which no longer exists, aimed to teach students how to use computers and software. “Since students today are more familiar with computers, we decided to expand the topic by creating a telemedicine course instead,” explains Azevedo Neto.

The use of telemedicine as an official means of providing healthcare, where the professional has the same responsibility as a conventional consultation, was only approved after clinical trials and protocols demonstrated its effectiveness and equivalence with face-to-face services. “This means that further tests are needed every time a new telemedicine procedure emerges. Just like with new medications, we have to test and compare them based on the evidence,” says Azevedo Neto. Telemedicine also allows early-career physicians to exchange information with more experienced doctors. In this way, different generations of professionals can jointly assess complex cases and seek a consensus on diagnoses.

Something similar occurs in the Telemedicine University Network (RUTE). Created in 2006 by what at the time was the Brazilian Ministry of Science and Technology, RUTE aims to support the improvement of telemedicine projects and provide infrastructure, computers, and communication equipment to research groups at universities nationwide, as well as disseminating research and development activities among the 139 participating institutions. Groups in the network communicate by videoconference to discuss cases, give classes, and carry out remote assessments of various medical specialties, for students at different stages of their education and professional training. “This exchange of information plays an important role in training medical professionals, especially those in remote regions of the country,” says Azevedo Neto.

Telemedicine and its categories

Teleconsultation
A meeting between patient and doctor, in a service similar to a face-to-face consultation

Telemonitoring
Doctors monitor the condition of patients with chronic diseases, such as diabetes

Teletriage
The physician analyzes a patient’s symptoms, then directs them to a specialist or a face-to-face service

Categories
Telemedicine began in the 1960s, arising from the need to provide healthcare from a distance to military personnel in remote locations and American or Soviet astronauts participating in space missions. “At the time it was very expensive, but today it has become much more accessible thanks to the arrival of high-speed internet, computers, and smartphones,” says Wen. In the midst of the current pandemic, teleconsultations help reduce the number of people visiting hospitals, lowering the risk of contagion.

Telemedicine encompasses a range of activities, including teleorientation, through which physicians give advice about disease prevention and care, assist other health professionals, or refer patients to specialists; telemonitoring, used to monitor chronically ill patients that the doctor already knows; and teleinterconsultation, through which information and opinions are exchanged between physicians seeking to form a consensus on diagnoses and treatments.

Teleconsultations use specific platforms to ensure confidentiality and allow doctors to issue official medical documents, such as prescriptions, certificates, and orders for exams, which are electronically validated by a digital signature, and can be printed. To avoid misuse, each document has a unique ID number that is verified online by pharmacy and lab computer systems.

A teleconsultation begins with registration of the patient and continues onto a series of steps that include obtaining consent for the use of medical software, performing an investigative teleassessment, updating medical records, and giving patients a summary healthcare report. “It is these steps that make teleconsultation more than just a simple video call,” he notes.

Despite the fact that it facilitates contact between patients and health professionals, telemedicine, just like face-to-face consultations, can be harmful to both parties if not carried out properly. The most common risks to patients include exposure of confidential data and interactions with unlicensed physicians or fraudsters. For doctors, the main risk is malicious use by criminals looking to take advantage of the system to file lawsuits against health professionals.

Regulation
Despite being widely used in countries such as Portugal, Germany, and the USA, teleconsultation is still viewed with reticence by the medical profession in Brazil. “There is this misperception that teleconsultation would replace all face-to-face healthcare,” says Marcelo Queiroga, president of the Brazilian Society of Cardiology. Telemonitoring in heart failure cases, for example, has become an important resource for preventing rehospitalization of patients suffering from heart problems. “Doctors need to see these technologies as allies in medical practice,” he concludes.

Brazil’s first resolution on telemedicine was passed in 2002 by the Brazilian Medical Council (CFM). In 2018, the body issued a more advanced decree, recognizing telemedicine as a formal means of providing medical services, subject to a number of requirements, including prior registration of the institution providing the service and the professionals involved; records to be kept on consultation dates and times; reports to be issued containing relevant clinical information from each consultation; and medical records to be updated.

Initially, it was only to be allowed after a face-to-face consultation, meaning it could not be the first means of contact between a given doctor and patient. This restriction, however, which was considered progressive at the time, was revoked by the CFM after criticisms from various regional agencies who complained that there had been insufficient debate about the topic.

Due to the COVID-19 pandemic, the council submitted a notice to the Ministry of Health recognizing telemedicine activities in Brazil, a decision that resulted in the publication of ordinance No. 467 on March 20, regulating its use to help respond to the public health emergency. At the same time, a telemedicine bill was passed, resulting in Federal Law No. 13.989, which aims to lower the number of people in hospitals and health centers to reduce exposure to the SARS-CoV-2 virus.

Even before the new regulations, teleconsultation services were already being offered by physicians and other health professionals, such as nurses, obstetricians, nutritionists, speech therapists, physiotherapists, and psychologists. At Hospital Albert Einstein in São Paulo, for example, telemedicine has been utilized since 2012. Through teleinterconsultation—remote conferences between health professionals—the hospital’s doctors started to interact with professionals from the public health network via the Brazilian public health system’s Institutional Development Support Program (PROADI-SUS). “From the start, we noticed that the younger doctors who discussed cases with us ended up changing their conduct 70% of the time,” says Eduardo Cordioli, manager of the hospital’s telemedicine department.

The hospital began offering teleconsultations in 2016. With an exclusive platform that can be accessed by doctors and patients via an app and a website, the services are encrypted and allow physicians to issue digitally certified certificates, prescriptions, and exam orders. “For us, professionals should have the autonomy to decide what type of care is most appropriate for each case, as is true for all consultations, whether in-person or remote,” says Cordioli. The specific teleconsultation clinical staff is composed of 200 professionals who can work on the hospital premises or from home.

Through the PROADI-SUS program, Hospital Albert Einstein is also working on a remote care platform for patients in the public health system. The partnership, started in March this year with the Primary Healthcare Department (SAPS), aims to extend monitoring of patients with hypertension and diabetes, for example, with each municipality deciding how to schedule consultations.

An estimated 20,000 doctors will be trained on how to carry out teleconsultations. “In addition to being an important tool for broadening access to health services, telemedicine reduces costs, making the patient’s journey less arduous,” says Cordioli