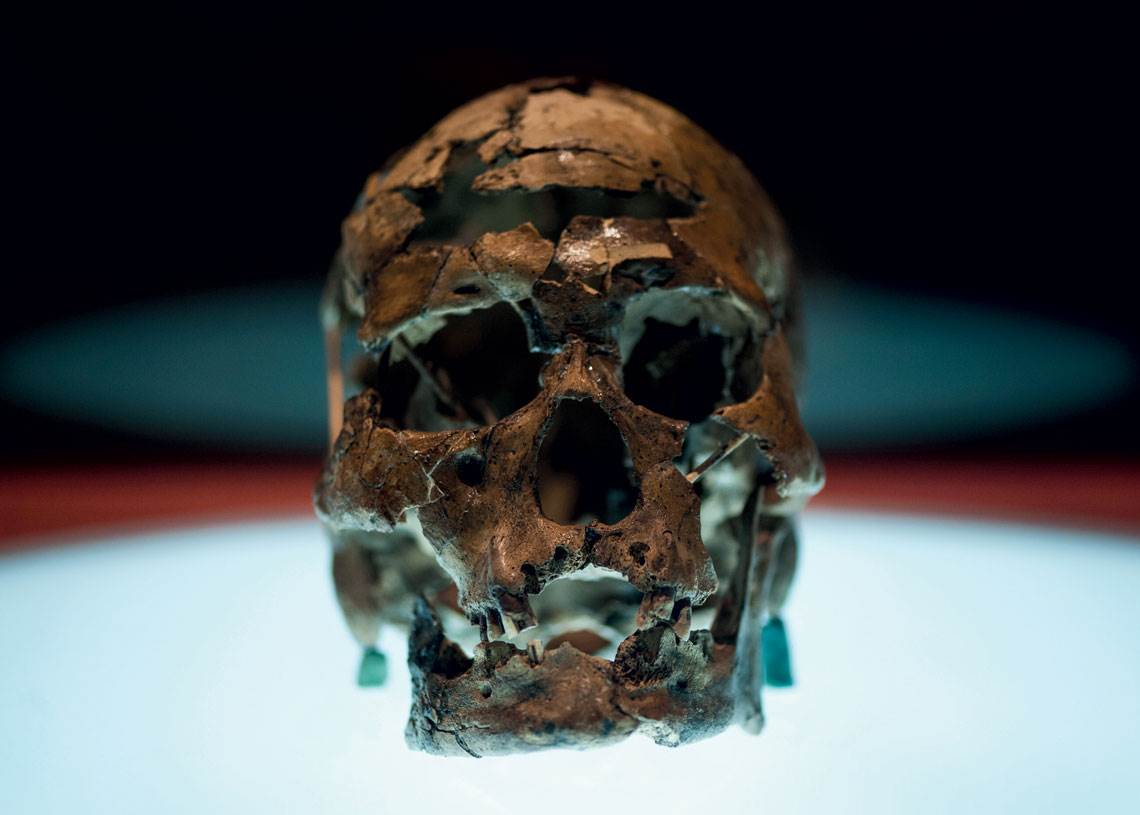 The reconstructed skull of Zuzu, exhibited at the American Man Museum in São Raimundo Nonato, in Piauí State

Zuzu, an ancient human skeleton found in the state of Piauí, has already been the center of a few archaeological controversies. One, now apparently resolved, is the era when this individual lived. Zuzu inhabited a region that is now a part of southeastern Piauí, about 9,600 years ago, approximately 1,400 years more recently than was previously estimated. Even so, it is among the oldest human specimens found in South America to date. The other open question, still unanswered, is regarding its sex: past studies have indicated the skeleton is from a woman, while others suggest that it came from a man—an option favored by the most recent analyses—however, with a physical makeup that suggests a female skeleton.

“The value obtained with the new dating of Zuzu is within expectations,” says Argentine archaeologist Lumila Menéndez, a researcher from the universities of Bonn, Germany, and Vienna, Austria, and lead author of the article published on May 12 in Scientific Reports, which presents the findings. “This value is similar to that obtained through direct dating for other ancient skeletons in South America. None of them are much older than that.” French-Brazilian archaeologist Niède Guidon is coauthor of the current study and leader of almost five decades of research conducted in Serra da Capivara National Park where the Zuzu skeleton was found. Since the 1980s, she has argued that Homo sapiens settled in the region tens of thousands of years ago, based on analyses of bonfires and lithic material believed to be produced by human beings. However, the value obtained in the new dating of Zuzu is the oldest for a human skeleton found in the region.

Determining when the oldest human specimens on the continent lived is fundamental to understanding how the occupation of the Americas came to pass. However, dating of biological materials many thousands of years old is challenging in Brazil. The tropical climate, high humidity, and acidic soils make it difficult to find well preserved bones and other tissues that contain genetic material and elements useful for determining the age of remains. As an alternative, archaeologists try to obtain a specimen’s age indirectly, by dating materials associated with the skeleton, such as the layer of sediment from which it was taken, or charcoal fragments found nearby.

It has now been possible to establish in what period Zuzu lived using direct dating of carbonate ions (CO3) from tooth enamel. Radioactive isotopes of carbon found in two molars allowed scientists to affirm that the skeleton is between 9,526 and 9,681 years old. That, however, would be a minimum age, the researchers say. It is possible that Zuzu is a few hundred years older, as carbonate from environmental material more recent than the skeleton may have integrated into the teeth after death.

“The absence of direct dating of skeletons found in the Serra da Capivara National Park led foreign researchers studying the peopling of the Americas to disregard data from the region,” observes Argentine physical anthropologist Ana Solari, coauthor of the work published in Scientific Reports, and a researcher with the American Man Museum Foundation (FUMDHAM), the entity responsible for preserving the park’s cultural and natural heritage.

Located in southeastern Piauí, about 530 kilometers from the state capital, Teresina, Serra da Capivara National Park occupies an area of approximately 130,000 hectares of caatinga (semiarid scrublands) in the municipalities of São Raimundo Nonato, João Costa, Brejo do Piauí, and Coronel José Dias. The area features one of Brazil’s largest concentrations of archaeological sites from the early Holocene, a geological epoch that lasted from 11,700 years ago to 8,200 years ago. Twenty-seven of the sites contain human skeletons, buried alone, like Zuzu, or in groups of up to 20 individuals. Ages acquired through indirect dating, obtained by analyzing materials found next to the skeletons, indicate that some are Zuzu’s contemporaries, while others may be even somewhat older.

Zuzu’s bones were found in July 1997 by Guidon’s team, during excavations conducted in a small rocky shelter known as Toca dos Coqueiros, in the municipality of Coronel José Dias. The site is a sloping rock wall covered by cave paintings, which offered protection from the sun and rain—the climate in the region was wetter during that era. Zuzu was discovered in a fetal position, lying on the left side, with the left hand under the face and the right hand in front of the face.

After some attempts at direct dating the skeleton, but impeded by the absence of collagen in the bones, Guidon and bioarchaeologist Andrea Lessa managed to establish the age of a piece of charcoal embedded in the skeleton’s right heel. The material was approximately 11,000 years old, the first age attributed to the skeleton. “Whenever possible, we try to prioritize the direct dating of skeletal remains, which are capable of defining the period in which the individual lived,” explains bioanthropologist Mercedes Okumura, from the University of São Paulo (USP), who studies the prehistoric population of Brazil, and did not participate in the current study. 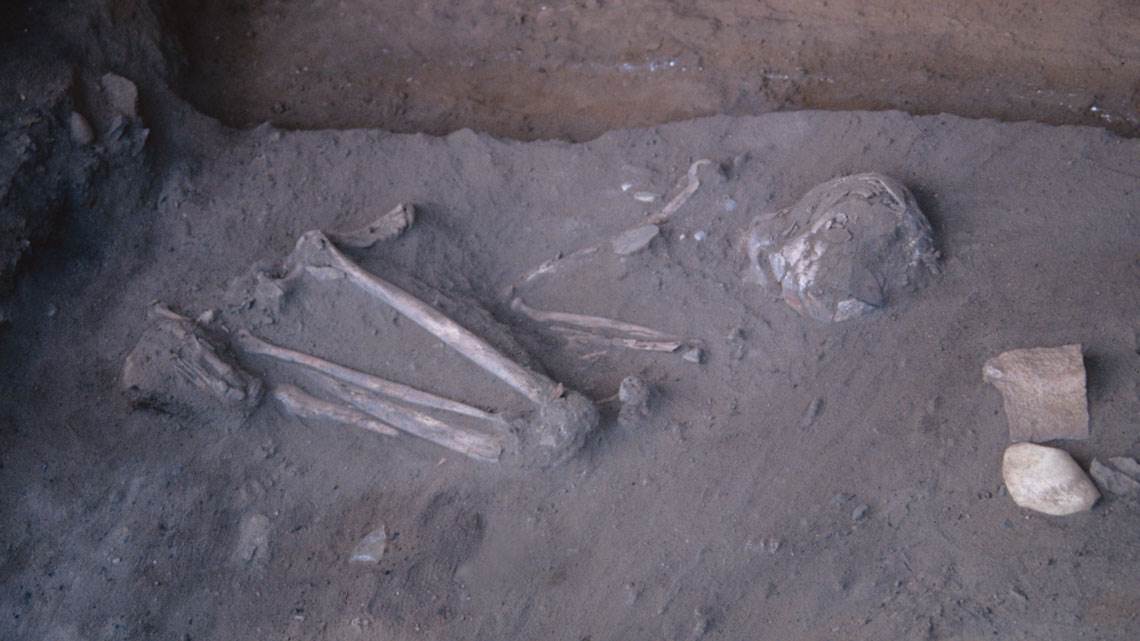 That first dating, presented in an article published in the American Journal of Physical Anthropology, was closer to the age attributed to another famous human skeleton, still considered the oldest in South America. The Luzia skeleton was from an adult woman who died between 12.500 and 13,000 years ago in what is now the municipality of Lagoa Santa, in the central region of Minas Gerais. “With the exception of Luzia and one or two other cases, almost all of the human material found in Lagoa Santa is between 9,000 and 10,000 years old, the same age now given for Zuzu,” says bioanthropologist Walter Neves, creator of the Laboratory for Human Evolutionary Studies at USP. During the 1990s, his lab conducted detailed analyses of Luzia’s skull and other skeletal remains from Lagoa Santa.

In their 2002 study, Lessa and Guidon proposed that Zuzu stood between 1.4 and 1.6 meters when alive and died at between 35 and 45 years of age. Certain characteristics of the pelvis bones indicated that the skeleton was from a woman, as did the results of analysis of DNA extracted from two bones from the right hand and one vertebra.

This was the beginning of another controversy to surround the Toca dos Coqueiros skeleton, since the results from the team’s genetic analysis was met with skepticism by other archaeologists due to the known difficulty of finding preserved collagen in skeletons from the Capivara Mountains.

Years later, archaeologist Albert Russell Nelson, then a researcher with universities in Michigan and Wyoming, reconstructed and reanalyzed Zuzu’s skull, which was badly fractured when found. He also compared the structures of the pelvis with those of two other female skeletons found in the Serra da Capivara, one almost contemporaneous with Zuzu and the other of more recent origin.

Nelson concluded that Zuzu had been male, albeit with more delicate traits. Another archaeological finding supported this idea, namely, the presence of two spearheads of chipped stone found next to the body, since it is believed that this type of offering was only made for men. In a commentary published in 2005, again in the American Journal of Physical Anthropology, he further suggested, based on the shape and measurements of skull structures, that Zuzu would have had an appearance similar to Luzia and the other remnants of the people who inhabited the Lagoa Santa region approximately 10,000 years ago. That conclusion was reinforced two years later by another analysis, published in the same journal, conducted by Neves and Brazilian bioanthropologist Mark Hubbe—now a professor at Ohio State University, in the United States—in collaboration with Guidon. In their paper, they stated: “With regard to Zuzu’s sex, our analyses support the idea put forward by Nelson in 2005 that this skeleton belongs to a gracile male.”

When he analyzed the skulls of the people of Lagoa Santa in the late 1980s, Neves found that these individuals, like other skeletons from the same period found in the Americas, had features similar to those of Africans and the aborigines of Australia and Melanesia—as distinct from current indigenous groups, which have Asian traits. Individuals from the group that Luzia and Zuzu most likely belonged to have a narrower skull, which is longer in the anteroposterior direction, with lower ocular orbits than the present-day indigenous people. According to the model of continental occupation proposed in 1989 by Neves and Argentine bioanthropologist Héctor Pucciarelli, they were descendants of the first human group to enter the Americas, who came out of Asia and had Australo-Melanesian features. This morphology continued to exist into recorded history, in individuals of peoples such as the Botucudos. The other indigenous groups, according to the model, were descendants of a second migratory wave, composed of individuals with Asian characteristics.

“The study is very elegant, but it was already expected that Zuzu would have had Australo-Melanesian features like the other Paleo-Indians, as had previously been indicated,” says Neves, who was not involved in the present study. He attributes the widespread presence of this trait during that era to human evolutionary history. Because Homo sapiens emerged in Africa and most likely only recently underwent a process of morphological transformation of the skull, these older features are widespread across the planet. “Until 10,000 years ago, several groups around the world had this morphology, which I call Pan-African,” the bioanthropologist says.

In addition to establishing a direct-dating value for Zuzu’s skeleton in the Scientific Reports study, Menéndez, Solari, and collaborators analyzed ten measurements of the skull and compared them with those from another 108 skeletons found in different regions of Brazil, 39 from individuals who lived in the early Holocene and 69 from the late Holocene (within the last 4,200 years). The results showed that Zuzu shows much more similarity with the skulls of the first group, which consisted mostly of Paleoindians from Lagoa Santa, than with those of individuals from more recent periods, even those who live or have lived in locations geographically closer to the Serra da Capivara such as the Guajajara people of Maranhão.

By comparing the shape of Zuzu’s skull with those of individuals from both periods, the researchers concluded that the skeleton was likely to be that of a woman. When compared exclusively with skulls from the early Holocene, the period to which it belongs, Zuzu is a male with delicate features. “It’s possible that sexual dimorphism, that is, differences in external physiognomy between men and women, has changed over time. These differences may have been less pronounced or, simply, these peoples may have had different morphological characteristics in the past,” says Menéndez. “Perhaps that’s why we have difficulty knowing if it was a male or female skeleton.” Sexual dimorphism, however, was well marked among the ancient inhabitants of Lagoa Santa, contemporaries of Zuzu.