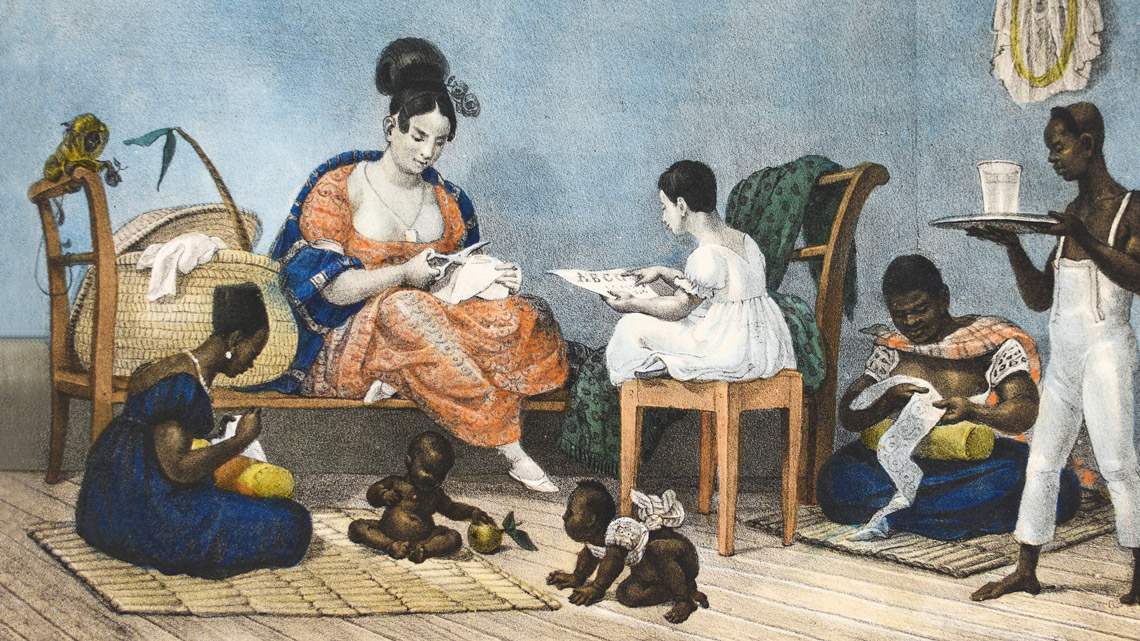 Recent research of historical demographic data—including by-name citizen lists and parish records—has shed new light on little-known aspects of Brazilian society during the colonial period (1500–1822). A large number of households headed by women and of children born out of Catholic wedlock are some of the aspects of colonial life these studies have revealed by analyzing demographic data produced by the Portuguese Crown and the Catholic Church. By-name citizen lists for São Paulo, covering the period 1765–1836, are the only documents of their kind in former Portuguese colonies that have been fully preserved.

Ana Silvia Volpi Scott, a historian at the Institute of Philosophy and Human Sciences and the Elza Berquó Center for Population Studies, University of Campinas (NEPO-UNICAMP), has researched these documents since the late 1980s. She notes that Portugal conducted its first census in the early sixteenth century. In the eighteenth century, Portugal extended its census to its colonies in Africa and the Americas as a way to better control its possessions. As part of these efforts, annual name lists—as the censuses were then called—were compiled between 1765 and 1836 in specific regions of Brazil until the first national census was carried out in 1872. In the Captaincy of São Paulo, these lists were used to compile data on each village, such as the number of households, the heads of each household, and the number of people living in the same household, including their extended family, dependents, and slaves. They also included information such as the name, age, color, and place of birth of each individual, and the type and quantities of produce of each household. Slave lists included information on whether slaves were African- or Brazilian-born. “Because they have been so well preserved, the name lists for São Paulo provide important insights into the region’s past,” says Volpi Scott, noting that some of the lists have been digitized and are available on the website of the São Paulo State Public Archives.

Catholic parish records of baptisms, marriages, and deaths are another important source of data for researchers looking to better understand the structure of Brazilian society during the colonial and Imperial periods, says Volpi Scott. The Catholic Church began keeping these records after the Council of Trent, held from 1545 to 1563. “Beginning in 1563, records were kept of all people who were baptized, married or deceased. These records contain some of the same data as in the by-name citizen lists, such as the person’s name, color, place of birth, and marital status,” says the researcher.

Carlos de Almeida Prado Bacellar, a historian at the School of Philosophy, Languages and Literature, and Humanities, University of São Paulo (FFLCH-USP) and formerly head of the São Paulo State Public Archives, between 2007 and 2013, explains that while Portugal produced name lists and population maps for all of its colonies, most of these documents were eventually lost. The few surviving documents are stored in Portuguese and Brazilian archives, some having been digitized as part of Portugal’s Counting Colonial Populations project. These data began to be compiled, says Bacellar, in the eighteenth century, when the science of statistics began to develop, and the Portuguese Crown realized that having data about its subjects was necessary for better government. In São Paulo, the first name list was compiled in 1765, at a time when there were major conflicts on the border along the River Plate. 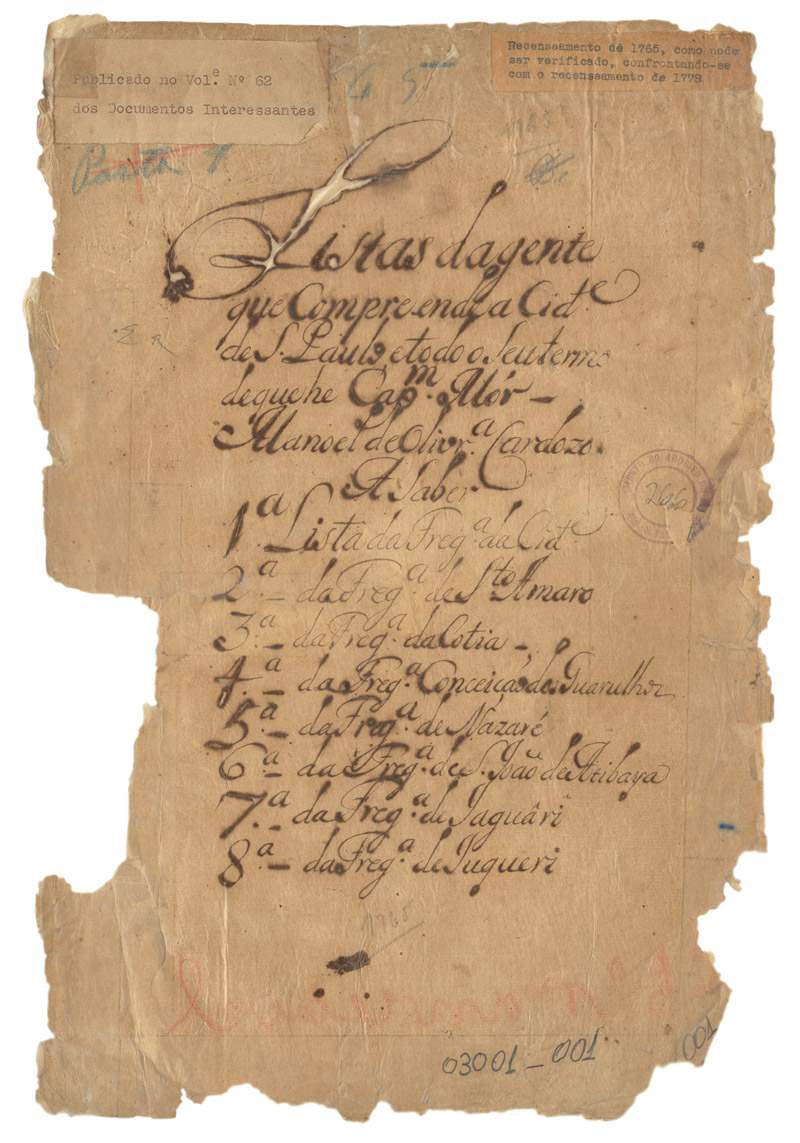 São Paulo State Public Archives, Cover of the Census of São Paulo City, 1765. Office of the Provincial Government, 1765. p. 1 of the pdf

“During this period, the Spanish began to advance into Portuguese territories, reaching as far as present-day Florianópolis,” explains Bacellar. Sebastião José de Carvalho e Melo, 1st Marquis of Pombal (1699–1782), then Secretary of State for Foreign Affairs of the Portuguese Empire, used these lists to determine the number of able-bodied men available to fight along the southern border. To ensure he had the means to sustain the military effort, he also compiled information on food production from population lists. Years later, Maria I (1734–1816), the first queen regnant of Portugal, used information from the name lists to assess the population’s wealth and the uses of agricultural properties. “This was one of the ways by which the Crown was able to identify new economic activities to compensate for the decline in gold mining in the region of Minas Gerais,” says Bacellar. Thereafter, statistics came into increasing use in informing public policies in Brazil. “Before then, government officials were unable to reckon how many men were available to be drafted for military strategies or to defend their borders,” he explains.

In analyzing early census data as part of research projects since 2000, Volpi Scott found that during the colonial period, around 20% of households were headed by women in some parts of Brazil. “This came as a surprise, and shows that women played a more prominent role in society at that time than previously thought,” she says. Bacellar, of USP, explains that the name lists indicate that when the head of a household died, he was replaced by his widow. This differed from the prevailing practice in Europe. There, women seldom headed their households, even in the event of their husband’s death. In these situations, a son, brother or other male relative replaced the deceased as head of the household. “In Brazilian colonial society, the role of women was not as subordinate as described in historiography until the mid-1960s. Recent studies of name lists have reassessed and upgraded the role of women.”

Another of Volpi Scott’s research interests concerns children born out of Catholic wedlock. She mentions, for example, a pioneering study carried out in the 1970s by Maria Luiza Marcílio, a historian at FFLCH-USP, who analyzed data collected from parish records in the city of São Paulo from 1750 to 1850. Her research found that 39 out of every 100 baptized children either were the children of unmarried parents or were “exposed.” This term indicates that the children had been raised other than by their families or had been left in foundling wheels provided by Catholic-run institutions. In her research of parish records for present-day Porto Alegre, Volpi Scott determined that, among free women, 70% of children were born into Catholic wedlock, compared to just 20% among slave women. “This indicates that, in general, access to legitimate marriage was limited for slaves,” she notes. The formalization of marriage within the Catholic faith was beneficial for slaves as in many cases it prevented married couples from being separated.

In his doctoral thesis, titled “Livres e escravos: População e mortalidade na Madre de Deus de Porto Alegre (1772-1872)” (Free and slave: Population and mortality in Madre de Deus de Porto Alegre (1772–1872), which he defended as part of his graduate program in Demography at UNICAMP in 2020, mathematician Dario Scott, Volpi Scott’s husband, similarly explored census and parish data for present-day Porto Alegre. By intersecting population data with name lists compiled by parish priests at Easter to monitor parishioners’ fulfillment of their obligation to confess and take communion at least once a year, as well as other parish records, he assessed mortality rates within the population from 1772 to 1872. His research showed that in 1779 the region had a population of 1,429 people, including 917 free persons and 512 slaves. By 1872 there were 8,284 residents, 6,936 free persons and 1,348 slaves. “My research showed that airborne diseases had the same impact on free persons as on slaves, but water- and food-borne diseases were more deadly among slaves,” he says, noting that parish records for different locations in Brazil are available in a digital repository created by the Mormon Church (see Pesquisa FAPESP issue nº 244). In analyzing average life expectancy at birth during a period beginning in the late eighteenth century, he found that free men lived to an average of 19.1 years from 1772 to 1782, and 30.3 years from 1859 to 1872. Life expectancy among male slaves went from respectively 17.1 to 24.4 years between the same two time intervals. Free women, in turn, lived to an average of 26.6 years from 1772 to 1782 and 34.8 years from 1859 to 1872, while life expectancy among female slaves went from 21.5 to 28.4 years between the same two time intervals. The low life expectancy, says Scott, was due to poor sanitation and the resulting spread of diseases and recurring epidemics. The situation for slaves was made worse by their poor living and working conditions. 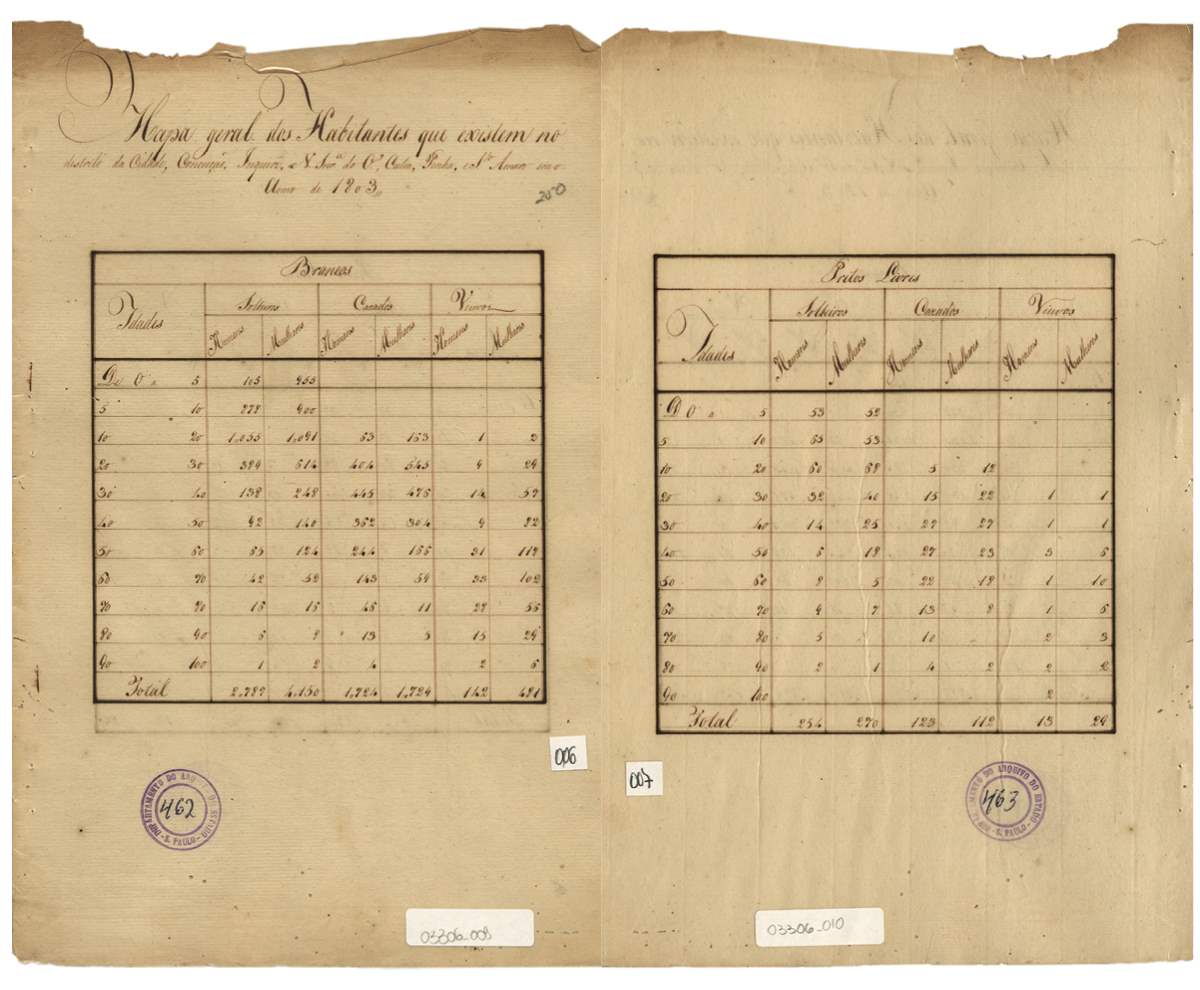 A name list for São Paulo dated 1803, including each individual’s name, age, relationship with the household head, marital status, color, place of birth, and occupationSão Paulo State Public Archives, A List of City Residents: Conceição, Juqueri, N. Sra. do Ó, Cotia, Penha, and Sto. Amaro, Year 1803. Office of the Provincial Government, 1803. pp. 5 and 6 of the pdf

Bacellar, of USP, notes that while indigenous slavery was theoretically abolished in Brazil in 1680, historical documents show that the practice continued for many years covertly. “The name lists show the number of people who were under the charge of a given master, a euphemism for slavery. By 1765, the name lists contained few indigenous people described as being under a master. Now they were listed as pardos or brown-skinned, the same category used to list Afro-descendant mestiços,” says Bacellar, describing the findings from his research since 2014.

In another of his studies using name lists, Bacellar retraced the development of São Paulo’s economy during the colonial period, with the data showing that the growing size of farm properties led to early exports of agricultural commodities. “The lists show that farm commodities began to be exported in a region that previously grew produce for local consumption only,” he says. “We also found that nuclear families—families consisting of a father, mother, and children—were predominant. This differs from research up to the mid-1960s, which suggested that most households included several relatives and extended family members,” notes Bacellar. He is currently examining historical documentation for the village of Itu, in an effort to understand how families were formed among slaves, how small farm properties were run, and how the property of large slave owners was transmitted in colonial society.

In a geoprocessing study he initiated in 2017, Ângelo Alves Carrara, a historian at the Federal University of Juiz de Fora (UFJF), analyzed the population composition of Zona da Mata in southeastern Brazil, an area between Rio de Janeiro and Minas Gerais now containing 143 municipalities. By intersecting name lists for Minas Gerais with the slave lists introduced to enforce the Law of Free Birth in 1870, Carrara determined that in 1872, 17% of the slave population in Minas Gerais lived in three cities in the southern portion of this region: Juiz de Fora, Leopoldina and Mar de Espanha. “Around 60% of the population of the present-day municipality of Argirita, then a district of Leopoldina, were the slaves of large landholders, who put up a strong resistance to abolition,” he says. These demographic characteristics have left scars in the region, he notes. “Around 40 years ago, some town squares were still designated for white people only. The demographic data provide an understanding of why racial discrimination is still present in these municipalities, where some neighborhoods are mostly black and others mostly white.”

In contrast, in cities like Viçosa and Rio Pomba, the average slave population never exceeded 20% of the total. In these areas there were slaves even on small and medium-sized properties, but smallholders had to work alongside their slaves in the field to be able to handle all the farm tasks, whereas large landholders had enough slaves to handle all manual labor. “Reflecting this, in these cities geographic segregation of blacks and whites in different neighborhoods is less pronounced than observed in southern Zona da Mata,” he explains.