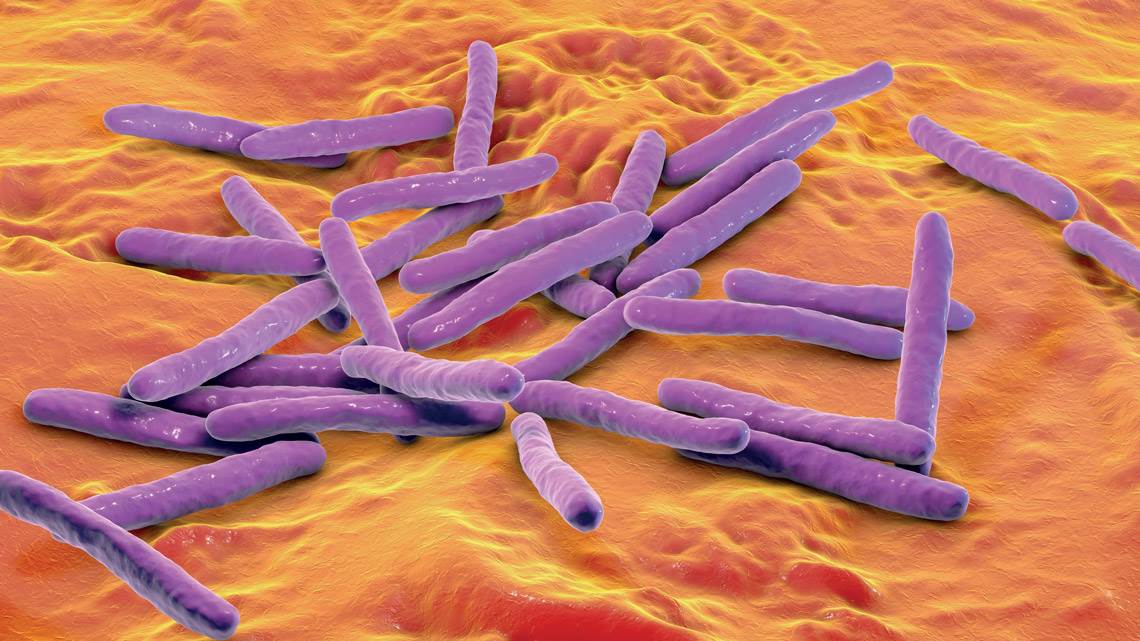 Electron microscopy image of the microorganism that causes leprosy

A serological test developed by researchers at the federal universities of Paraná (UFPR) and São Carlos (UFSCar) could contribute to the control of leprosy, also known as Hansen’s disease. According to the World Health Organization (WHO), three to four million people suffer from permanent disabilities linked to the infectious disease, which affects the skin, nerves, and muscles, and can cause lesions, loss of sensation, and progressive weakening if not diagnosed early and treated.

The new exam is portable, sensitive, and shows results in 40 minutes. Furthermore, it is a non-invasive way of detecting the disease. A patent request has been filed by professors Juliana Ferreira de Moura, from the Department of Basic Pathology at UFPR, and Ronaldo Censi Faria, from the Department of Chemistry at UFSCar. Doctoral students Cristiane Zocatelli Ribeiro, from UFPR, and Sthéfane Valle de Almeida, from UFSCar, are also included as authors in the invention’s patent registration.

The test is unprecedented, according to its inventors, and consists of using a protein fragment (peptide) specific to the bacillus that causes leprosy, Mycobacterium leprae, to detect antibodies present in blood samples. The more antibodies found, the more bacilli there are in the body. The peptide is synthetically produced, as M. leprae cannot be cultivated in conventional media, like most bacteria. It is then chemically joined to a particle with magnetic properties. This makes it possible, with the use of a magnet, to concentrate and isolate the antibodies. “When analyzing the blood sample, we were able to discard serum and other interfering compounds, separating only what is relevant for detecting the antibodies that fight leprosy,” explains Faria (see infographic on how the test works).

Currently, leprosy diagnoses are mainly performed clinically, that is, based on signs observed by the attending physician when examining the patient or when evaluating the reported complaints and symptoms, which can manifest years after the bacillus has been present in the infected patient. “There are complementary exams for clinical diagnosis, such as the slit skin smear test and biopsy, in which samples of the patient’s skin are extracted for laboratory examination in order to detect bacilli and observe the skin structure. But they are more invasive, expensive, and dependent on technicians than the test we’ve developed,” states Moura.

A global challenge
Mentioned in Old Testament accounts as a contagious and degrading pestilence that isolated its hosts from society, leprosy is listed as a neglected tropical disease (NTD), with about 200,000 new cases annually—14% of which occur in Brazil, which is second only to India in numbers of cases. In 2019, of the 27,800 new cases recorded in Brazil, 8.5% (2,351) were patients diagnosed with Grade 2 leprosy, an advanced stage that presents with irreversible impairments.

Combating NTDs is one of the United Nations’ Sustainable Development Goals for 2030 (see Pesquisa FAPESP issue nº 302). Although the UN and the WHO intend to eradicate leprosy in the next 10 years, the disease, which is transmitted through the upper respiratory tract, is considered endemic in the North and Central-West regions of Brazil. (Endemic diseases are those that manifest regularly in certain regions, with a predictable number of cases).

The WHO global strategy, entitled “Towards zero leprosy” emphasizes active, early detection of new cases. “We would like the test to be taken to endemic areas to identify people who have antibodies. Then it would be possible to refer them to doctors to confirm the diagnosis and monitor them for signs of leprosy. We still don’t know to what extent the appearance of antibodies acts as a sign that the disease is developing,” explains Moura.

The most important thing, says the UFPR professor, is that drug treatment is administered at the slightest sign of infection. “For leprosy, early treatment is important for two reasons. First, because within a few weeks the patient will stop transmitting the bacillus, ending the contagion cycle. Second, because symptoms are controlled and severe sequelae such as loss of vision, strength, and movement, and deformities, among other issues, are prevented,” Moura adds.

The researcher points out that, in addition to increasing referrals of patients to physicians during the early stages of the disease, the serological test will help specialists prescribe the most appropriate treatment. Depending on the number of antibodies detected, it is possible to determine if the patient has a low number of bacilli in the body (paucibacillary) or many (multibacillary). “Detecting antibodies in paucibacillary patients allows the doctor to treat someone who could be undiagnosed. In addition, it gives doctors the precise information necessary to offer the most appropriate treatment, which usually lasts six months for the paucibacillary and 12 months for multibacillary patients.”

Leprosy specialist Marcos César Florian, from the Dermatology Department at the Federal University of São Paulo School of Medicine (EPM-UNIFESP), comments that rapid tests like the method developed at UFPR/UFSCar expand the current diagnostic capacity and contribute to controlling contagion and preventing more severe symptoms by facilitating early detection of the bacillus.

“Increasing the laboratory arsenal for assessing people in endemic areas, as well as those who live with patients diagnosed with leprosy, is an important public health and prevention strategy,” says Florian. “Professionals working with leprosy patients, especially those in areas far from large cities, who lack access to good slit skin smear test equipment and good pathological anatomy labs, have to rely exclusively on clinical presentation to make a leprosy diagnosis. There are some very difficult cases, as it is a complex, chronic, tricky disease with numerous clinical variants.”

The dermatologist adds that other tests for diagnosing leprosy have been approved recently by the National Health Surveillance Agency (ANVISA), but they use a different methodology based on the extraction and analysis of genetic material (Polymerase Chain Reaction, PCR). One of these tests, co-developed by the Carlos Chagas Institute, a unit of the Oswaldo Cruz Foundation (FIOCRUZ) in Paraná, and the Paraná Molecular Biology Institute (IBMP), is the NAT Hans Kit, which detects the DNA of the leprosy bacillus through tissue samples from skin or nerves. Another is a test from the Mobius Life Science laboratory that uses a skin biopsy. Both need a laboratory and specialized personnel to process the material and conduct the PCR exam. “These technologies are already known. What’s new is the test validation and the possibility of using them in the field, on a daily basis, beyond the academic research environment, since they have viable prices and accessible technical requirements,” he says. Dr. Florian observes that they also need to be incorporated by the Ministry of Health into its leprosy programs and made available to teams working in various regions around the country.

The researchers were funded by the National Council for Scientific and Technological Development (CNPq) and by the Brazilian Federal Agency for Support and Evaluation of Graduate Education (CAPES). The group is now looking for partnerships, private and public, to make licensing the new technology and producing a commercial version of the diagnosis viable. The test will still need to be approved by ANVISA.

Faria comments that the study methodology at the UFSCar Bioanalytics and Electrochemistry Lab—which has already developed proposals for devices aimed at the early diagnosis of Alzheimer’s, certain types of cancer (breast, head, and neck) and Covid-19—combines the quest for solving problems, which is a characteristic of science, with making these solutions feasible on a large scale. Some of the tests are in negotiations for patent licensing with companies interested in developing a commercial product.

“The students build everything: electrodes, biocompounds, reagents, sensors, etc. Dialogue with the manufacturing sector, which has lasted for years, has shown us that it is more interesting to advance with research in nanotechnology using commercially available materials. This way, we’re able to generate prototypes that have a greater potential for production at scale,” points out the UFSCar researcher. The team’s next step is to work on a portable, affordable pharmacy version of the leprosy test, similar to blood glucose strips.