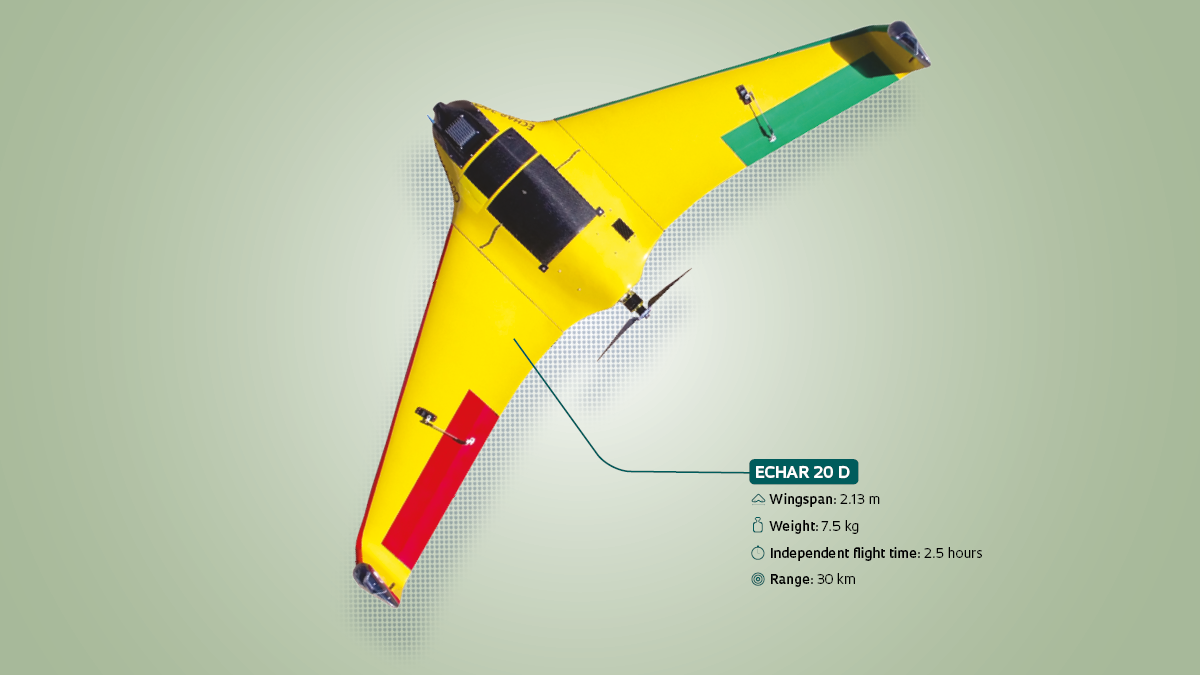 “Reaching new heights” is a common expression in the corporate world. It is every company’s goal after establishing themselves in the market. For drone developer XMobots, based in São Carlos, São Paulo State, reaching new heights—and distances—are not just metaphors, but technological and strategic achievements. The company was recently awarded a license by Brazil’s National Civil Aviation Agency (ANAC) for one of its unmanned aerial vehicles to carry out flights classified as BVLOS (Beyond Visual Line of Sight), at distances of up to 30 kilometers (km) and heights of up to 120 meters (m), or 400 feet, above ground level. The first license for BVLOS flights in the country was obtained by the company AL Drones in 2019, for its SenseFly eBee aircraft. The authorization was a major milestone for the sector, and permitted the company to make flights of up to 5 km.

It is not the first time that XMobots, funded by FAPESP, has achieved new feats, having already obtained ANAC approval in 2018 for flights above 120 m and a range of 2 km for a drone from its Arator series, used mainly to map agricultural areas. In March of this year, its Echar 20D drone was given authorization to fly at distances of up to 30 km. Now, the company is awaiting ANAC approval for its Nauru 500C model, which is capable of BVLOS flights with a range of up to 60 km. “We hope to receive authorization by the end of the year,” says mechatronic engineer Giovani Amianti, CEO of the company and one of its founding partners.

Obtaining BVLOS certification is not easy. The process takes at least two years because so many requirements need to be met. Drones authorized to work beyond the operator’s field of vision are increasing in value because by covering greater distances, they can improve productivity in a wide range of applications, such as topographical and agricultural mapping, surveillance, and goods delivery. “When mapping extensive areas, a range of 30 km allows users to see places that are difficult to access. It optimizes their time and investment,” says Amianti.

Manufacturing BVLOS certified aircraft is what sets XMobots apart from the competition. Among other Brazilian manufacturers, Speedbird Aero, from Franca in São Paulo State, received an Experimental Flight Authorization Certificate from ANAC in August 2020 to test its DLV-1 drone in BVLOS operations for one year. Food delivery company iFood has already conducted early trials with the technology. The multirotor drone is equipped with six pairs of propellers and can carry loads of up to 2 kilograms for 2.5 km. The Echar 20D and Nauru 500C models developed by XMobots are fixed-wing aircraft whose designs are similar to an airplane. They all have electric motors.

The drones are controlled by software, configured by the pilot in advance based on information about the path to be taken, the area to be mapped, and the landing location. The Echar 20D also has a front camera that transmits images to a flight interface installed on a laptop.

Founded by nine graduate students at the Polytechnic School of the University of São Paulo (POLI-USP) in 2007, XMobots was created to operate in the aerial robotics sector. The company now employs more than 150 people, of which 60 are involved in research and development (R&D). Two years after the company was founded, it completed its first product, the Apoena drone, with funding from FAPESP’s Research for Innovation in Small Businesses program (RISB, or PIPE in Portuguese).

Over the next few years, it received three more RISB grants to design new drones and related systems. Amianti says that the company was only able to keep its R&D department running in the early days thanks to the support provided by funding agencies such as FAPESP, the Brazilian Funding Authority for Studies and Projects (FINEP), and the Brazilian National Council for Scientific and Technological Development (CNPq).

In 2011, XMobots moved to São Carlos, where it built a 6,000-square-meter (m²) factory. A second plant, almost twice the size, is now being built in Itajubá, Minas Gerais. “Scheduled for completion later this year, this factory will focus on mass production of some of our drone models. In São Carlos we will continue to focus on R&D and manufacturing larger aircraft,” says Amianti. By starting mass production, the company wants to increase its number of customers—currently at 350—and exports. XMobots has already sold drones to users in Angola, Chile, Argentina, and Peru, and plans to start sales in North America next year.

An evolving market
The drone sector is currently experiencing rapid growth. The global market for these aircraft, according to German consultancy Drone Industry Insights, is expected to grow from US$22.5 billion in 2020 to US$42.8 billion in 2025. Brazil is following this trend. “The unmanned aerial vehicle sector is growing every year in the country. We have more than 83,000 registered drones, of which almost 34,000 are for professional use,” says aeronautical engineer André Arruda, cofounder of the consultancy Al Drones.

Electrical engineer Lúcio André de Castro Jorge, from the Instrumentation branch of the Brazilian Agricultural Research Corporation (EMBRAPA), believes precision agriculture requires the use of new technologies such as drones, soil and climate sensors, and embedded electronics—resources he argues need to be supplied by national industry (see Pesquisa FAPESP issue no. 283). “There is a huge potential market for drones in agriculture, but it is important to stimulate Brazilian industry to ensure small producers have access to the technology,” says Jorge.

In addition to the agricultural market, other sectors, such as forestry and mining, are also open to robotic aircraft. Drones are useful tools for taking forest inventories, complementing satellite image surveys, aiding field teams (see Pesquisa FAPESP issue no. 300), and inspecting tailings dams in the mining industry. “Aerial robotics is developing year on year and it looks likely to assume a leading role in various sectors of the economy in the very near future,” points out the CEO of XMobots. “That’s why it’s important to invest in drones that fly farther and higher.”