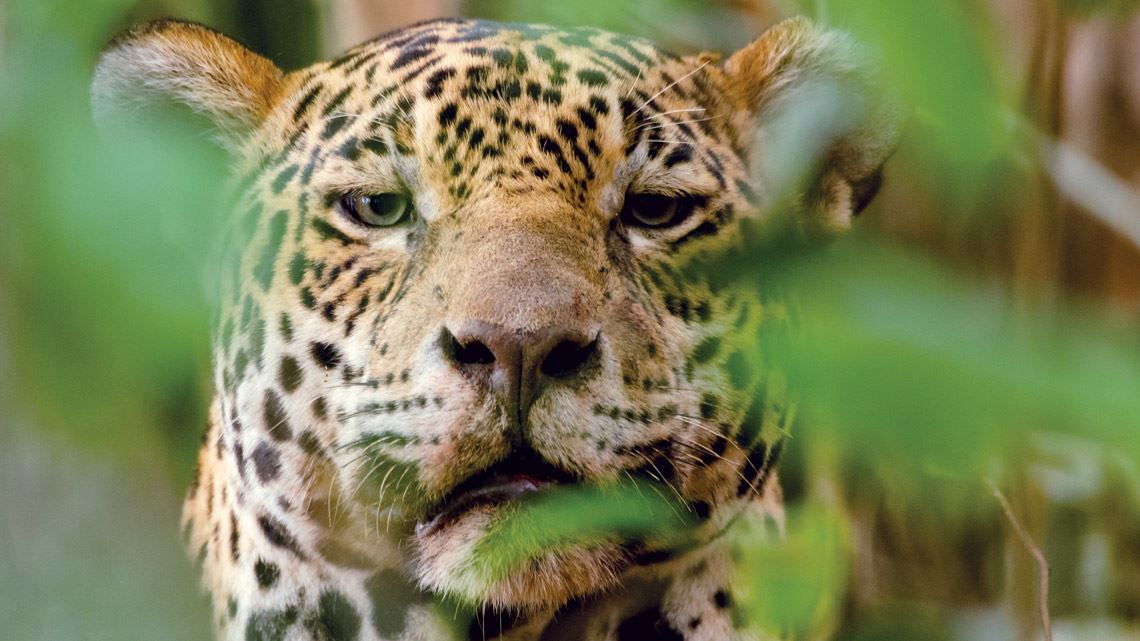 Between 2016 and 2019, nearly 1,400 jaguars may have died or been displaced in the Amazon due to deforestation

From 2016 to 2019, the Amazon lost 32,000 square kilometers (km2) of native vegetation—equivalent to 0.6% of the biome’s total area in Brazil—due to fires and deforestation, according to data from the Brazilian National Institute for Space Research (INPE). As a result of the recent surge in forest degradation, seen mainly in the so-called “Arc of Deforestation” in the southern and eastern areas of the Amazon, around 1,400 jaguars may have died or been displaced from the areas where they live. “This is a warning sign that deserves our attention,” says veterinarian Ronaldo Morato, head of Brazil’s National Center for Research and Conservation of Carnivorous Mammals (CENAP) at the Chico Mendes Institute for Biodiversity Conservation (ICMBIO) and leader of the study, supported by FAPESP, which made the calculations. “This figure represents 1.8% of the jaguar population estimated to exist in the Brazilian Amazon.”

Published on June 25 in the journal Conservation Science and Practice, the estimate is imperfect. Calculating the exact number of jaguars killed, injured, or displaced by chainsaws and fires would require each individual to be captured and tagged so that their locations could be monitored using GPS and camera traps. Given the impossible nature of tracking all the jaguars in an area as vast and complex as the Amazon, biologist Jorge Saraiva de Menezes, from Morato’s research team, estimated the approximate number killed or displaced in the period by cross-referencing data from areas that lost more than 50% of their native coverage with information about the number of jaguars in the region.

The Amazon is currently the world’s biggest refuge for jaguars. A few years ago, Polish biologist Włodzimierz Jędrzejewski, from the Ecology Center at the Venezuelan Scientific Research Institute, and colleagues used information from dozens of camera traps installed at 80 different locations to calculate the total number of jaguars in the Americas. According to the estimate, published in the journal PLOS ONE in 2018, there were around 173,000 jaguars.

Found exclusively in the Americas, which became their home after they separated from an ancestral lineage of large cats in Asia 3 million years ago, jaguars (Panthera onca) are among the largest carnivores in the world. They can reach almost 2 meters in length (from the nose to the beginning of the tail) and weigh up to 150 kilograms. In size and strength, they are second only to two evolutionarily similar felines: the lion (Panthera leo), now found in sub-Saharan Africa and parts of India; and the tiger (Panthera tigris), which survives in small areas of Asia. Jaguars are fast runners—they can reach up to 80 kilometers per hour—as well as being excellent at swimming and skilled at climbing trees. In nature, they live for 10 to 15 years and can be found in plains and savannas, but they prefer dense forests, close to water courses and far from humans.

Due to the influence of environmental factors such as forest cover, temperature, food availability, and landscape changes, jaguars are now unevenly distributed over an area of 8.9 million km2, about half of the territory they occupied at the beginning of the twentieth century, when they were found from the USA to Argentina (see map). According to Jędrzejewski’s calculations, nine countries in South America, all containing areas of the Amazon rainforest, are home to 93% of the jaguars (about 161,000 individuals). Some 86,800 of them are in Brazil, where they are also known as jaguaretê or canguçu, and 90% of that number live in the Amazon.

The species is facing a less severe situation, however, than the lion and the tiger, which now number 20,000 and 4,000 in the wild respectively. But this does not mean there is no cause for concern. Biologists, geneticists, and conservation specialists believe only a small proportion of individuals—for big cats, somewhere around 10% of the population—are actually capable of procreating and helping to maintain the species. This is called the effective population size, a genetic concept that is roughly equivalent to the group of animals that collaborate reproductively over generations. In some areas of fragmented vegetation, this number can be very low (for example, less than 10 individuals), which creates problems relating to genetic diversity.

In 2017, the International Union for Conservation of Nature (IUCN) classified the jaguar as “near threatened” as a result of the 20–25% reduction in its global population over the previous 21 years. In a 2013 assessment, Morato and his colleagues estimated that the number of jaguars in Brazil had fallen by 30% in the previous 27 years and forecast a similar reduction over the following three decades. The main threat to the species, according to several studies, is the loss and fragmentation of areas of native vegetation, generally as a result of human activities such as agricultural expansion, mining, construction of hydroelectric plants, and new roads.

Jaguars are solitary predators that need large spaces to hunt and survive. In a large study on the movement of these cats, ecologist Jeffrey Thompson, a researcher at Guyra and Instituto Saite, both in Paraguay, together with 60 colleagues, including several from Brazil, spent several years following 111 jaguars in seven countries in the Americas and 13 distinct environments. The results of the research were published in the journal Current Biology on July 7, in one of the last papers authored by zoologist Peter Crawshaw Junior from São Paulo, one of Brazil’s leading experts on jaguars, who died from COVID-19 on April 26 this year. They suggest that the average area a jaguar needs to live—known as its home range—varies greatly from one biome to another. It is smaller, at around 60–200 km2, in environments with denser vegetation and abundant food, such as the Pantanal or the Llanos (the grassland plains of Colombia and Venezuela), and a little larger, around 250 km2, in the Amazon. It can reach 400 km2, however, in the Cerrado (wooded savanna) and Caatinga (semiarid scrublands), where food availability is lower and human presence is greater.

Experts in the field say that before the arrival of European colonizers, jaguars lived throughout the territory of what would later become Brazil. As the forests were cleared, however, they were wiped out across a vast area stretching from the northeast to the south of the country. They disappeared from the Pampas and today their habitat is restricted to a third of the Cerrado, 20% of the Caatinga, and less than 10% of the Atlantic Forest—it is estimated that there are only a few hundred individuals in the latter two biomes. About 80% of the Brazilian Amazon is home to jaguars.

“The Atlantic Forest offers an extreme example of the damage caused by humans to the genetic diversity of jaguars,” says biologist Eduardo Eizirik of the Pontifical Catholic University of Rio Grande do Sul (PUC-RS), a pioneer of studies on feline genetics in Brazil. The first analysis of jaguar populations in different countries of the Americas, conducted by Eizirik in 2001, helped confirm that the animals now belong to one single species with no major regional subdivisions. More recently, biologist Taiana Haag, working under Eizirik’s supervision, compared the genetic characteristics of four jaguar populations in Atlantic Forest fragments located across the states of São Paulo and Rio Grande do Sul and found that their diversity had declined. The population in each fragment has quickly become more homogeneous. In less than 10 generations, individuals in the same population have become genetically more similar to each other, while the animals within each fragment have accumulated random differences that make them more distinct from those in others.

“The loss of diversity makes these groups more susceptible to disease and reduces the likelihood that they will be able adapt to environmental changes,” explains biologist Caroline Sartor, from the PUC-RS team. She is working on a genetic characterization of jaguars born in the wild and now in captivity. The idea is to bring together a group of animals that represent the genetic diversity found in the most threatened environments, such as the Atlantic Forest, so that if necessary, they can be reintroduced in a way that would restore this diversity. “One challenge,” she anticipates, “will be obtaining enough individuals for the breeding stock to reflect the diversity found in nature”.

Other studies carried out by the PUC-RS group have corroborated the theory that the effects observed in jaguar populations in the Atlantic Forest are caused by human activity, which has fragmented the native vegetation to the extent that jaguars are now unable to move over great distances and breed with individuals from other populations.

Biologist Daniel Kantek analyzed the genetic profile of 110 jaguars in two geographically distinct regions of the Pantanal, where food is plentiful and the animals are currently growing bigger than ever previously recorded. Some live in the northern area of the biome in the state of Mato Grosso, which was severely affected by fires in 2020, and the rest in areas of native vegetation on private farms in Mato Grosso do Sul. Although the two groups are separated by hundreds of kilometers (km), they are part of a single genetic population with a good level of genetic variability according to the study’s conclusions, published in Biological Conservation in July. “The gallery forests of the Paraguay and Cuiabá rivers seem to function as an ecological corridor, allowing jaguars to move from one group to the other and interbreed,” says Kantek, who is an environmental analyst at ICMBIO.

Gustavo Lorenzana, a Mexican ecologist who studied his PhD under Eizirik’s supervision, observed something similar in the Amazon, where the jaguars maintain a high genetic diversity and are classified as a single population with genetic exchanges between individuals that live at distances of more than 3,000 km. The researchers believe that high diversity and genetic exchanges were also common in other biomes before Europeans arrived in the Americas. “Only intense changes in the landscape such as those caused by humans can explain the loss of diversity among jaguars in the Atlantic Forest,” says Eizirik.

An initial analysis of the active genes (exome) in 113 jaguars from five Brazilian biomes by biologist Henrique Figueiró during his doctorate at PUC-RS suggests that those in the Amazon are genetically closer to those in the Atlantic Forest, Caatinga, and Cerrado than those in the Pantanal, where genetic diversity is also high. “In theory, it would be more appropriate to repopulate Atlantic Forest areas with individuals brought from the Amazon than with animals from the Pantanal. Because of the greater genetic similarity, animals from the Amazon may be able to adapt better to the Atlantic Forest,” suggests Figueiró, who in 2017 led the complete sequencing of the jaguar’s genome—based on genetic material from Vagalume, a male from the Pantanal rescued as a cub after the death of his mother—and found that some of the animal’s characteristics, such as the muscles of the skull (proportionately larger than in other big cats) and the strength of the forelegs, were probably selected as a result of environmental factors and then retained by the species.

In parallel with efforts to stimulate reproduction in captivity and relocate individuals from one biome to another for the conservation of the species, a basic and fundamental strategy is to preserve native vegetation and current jaguar populations, which function as a genetic reserve, as much as possible. “The future of the jaguars is in our hands,” says Morato, from ICMBIO. “Brazil’s role in the conservation of these cats is essential.”