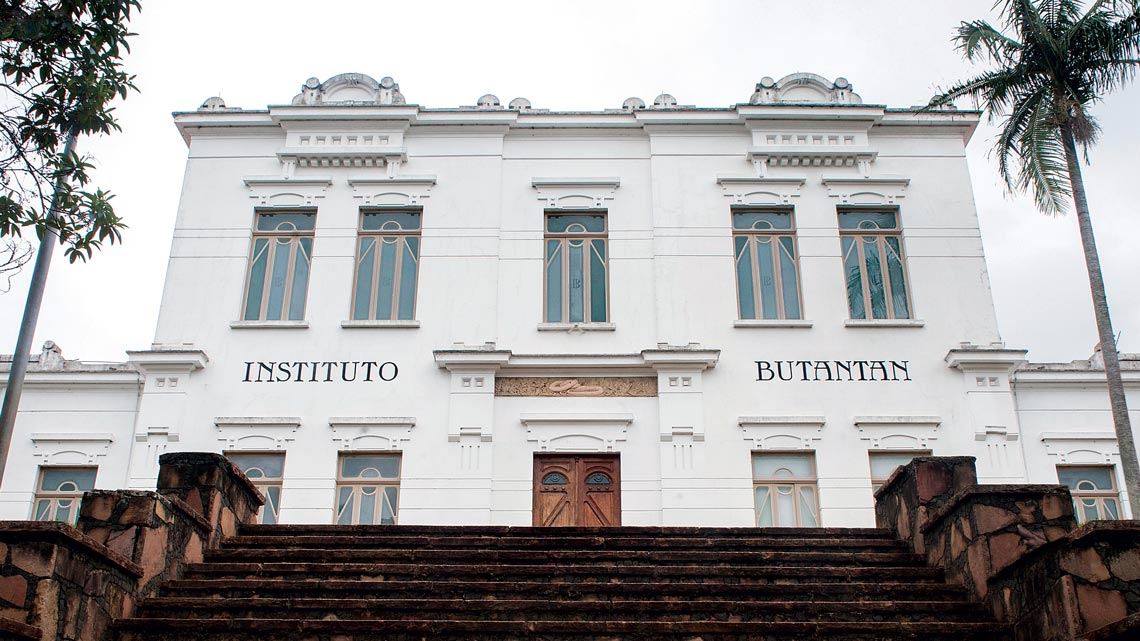 We breathe enthusiasm at the Butantan Institute. The need to find ways to fight the Covid-19 pandemic integrated remote teams for everyday projects. As a result, researchers and support groups at the institution, which is turning 120 this February, felt renewed and inspired by the possibilities of taking action. “We were preparing ourselves to take a leap when the pandemic began,” says physician Dimas Covas, director of the institute (see interview on page 26).

At the end of December 2020, after evaluating actions against the pandemic, biomedical physician Sandra Coccuzzo Sampaio Vessoni, director of the Scientific Development Center and coordinator of the Strategic Diagnostic Laboratory, emphasized: “We are here to quickly meet the needs of public health, as the pandemic has required.” In March, when the first cases of Covid-19 were registered in Brazil, she and biologist Carolina Sabbaga adapted areas of the quality control sector to do fast diagnostic testing for the virus. The institute reached 4,000 tests per day and assumed coordination of the network of 29 public and private laboratories that completed two million exams in the state of São Paulo in 2020.

Today, Butantan delivers seven types of vaccines and 13 serums for national distribution. Through the sale of these products to the Ministry of Health, the institute receives close to R$2 billion per year—another R$500 million comes from the State Secretariat of Health, with which it is associated. FAPESP is the primary funder of the institute’s scientific activities: 941 projects have been concluded since the 1990s; and 54 projects are in progress, with two to four years’ duration, totaling R$136.7 million. In 2018 and 2019, the Foundation contributed R$17 million of the R$20 million directed to research and another R$6 million of the R$18 million invested in innovation. An additional R$17 million came through other research funding agencies and corporate agreements.

When the pandemic began, pharmacist Ana Marisa Chudzinski-Tavassi, director of the Center for Development and Innovation (CDI), called a meeting of the directors of the 12 laboratories with whom they work, to discuss strategies. They were able to obtain the isolated virus, through a project with the Institute of Biomedical Sciences at the University São Paulo (ICB-USP), and they replicated and deactivated it using radiation, in collaboration with the Institute of Energy and Nuclear Research (IPEN). “It was an integrative effort, which should have been done sooner, involving various sectors of the institute,” she noted. “Everyone knows each other, but few have had the opportunity to work together before.”

In December, Butantan announced the conclusion of the development of an anti-coronavirus serum, which could be used to prevent infection by people showing symptoms of the disease (see “Butantan develops serum against coronavirus” in Pesquisa FAPESP). Its use in people with Covid-19 depends on approvals of clinical trials by the Brazilian Health Regulatory Agency (ANVISA). 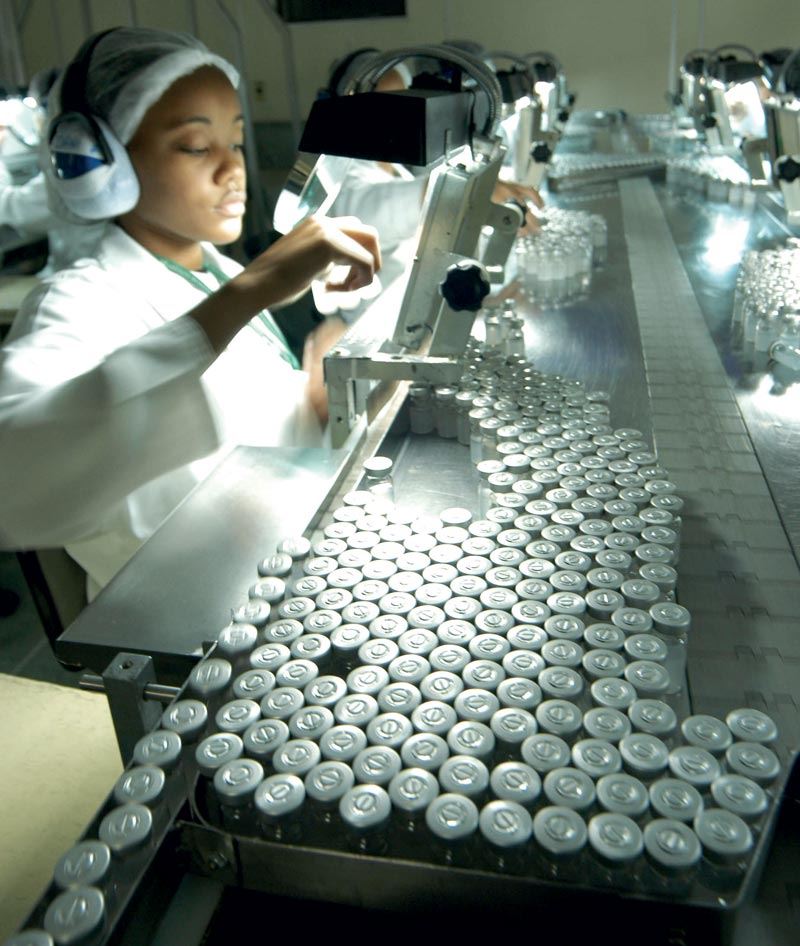 In June 2020, the institute announced an agreement with Sinovac, of China, to carry out phase 3 trials to assess the safety and efficacy of CoronaVac in individuals, and to produce the vaccine in Brazil. The study was launched in July with support from FAPESP (R$32.5 million), involving 12,476 volunteers in 12 research centers from 10 cities across six states in the southeast, south, and central west regions.

“The clinical trial of the Covid-19 vaccine will change Butantan’s story. We are much more agile,” says nurse Ana Paula Batista, manager of operations in Clinical Projects at the institute. “From the moment the trials were planned, everything has been done in very short periods of time, including importing the vaccines.” As this work is a top priority, she says the time required for the institute’s Legal Department to approve partnership agreements with research centers has dropped from three months to 10 days. The clearance of fiscal invoices to send materials used to take two days and is now done in one hour. “The other teams at the institute now clearly understand what a clinical trial is and the work that each must do for us to reach our goals,” she says.

Last December, the institute began to package the vaccine produced in China. “Each vaccine follows specific mixing processes, agitation, and maintenance of its homogeneity,” explains pharmacist Tiago Rocca de Moraes, manager of strategic partnerships and new business for the Butantan Foundation, an institution initially established in 1989 to facilitate the institute’s production and which today also supports research and education. The technological transfer agreement with the Chinese company is one of 10 in effect—the first was established in 1999, with the French pharmaceutical company Sanofi, through which the institute began to produce the flu vaccine in 2010. 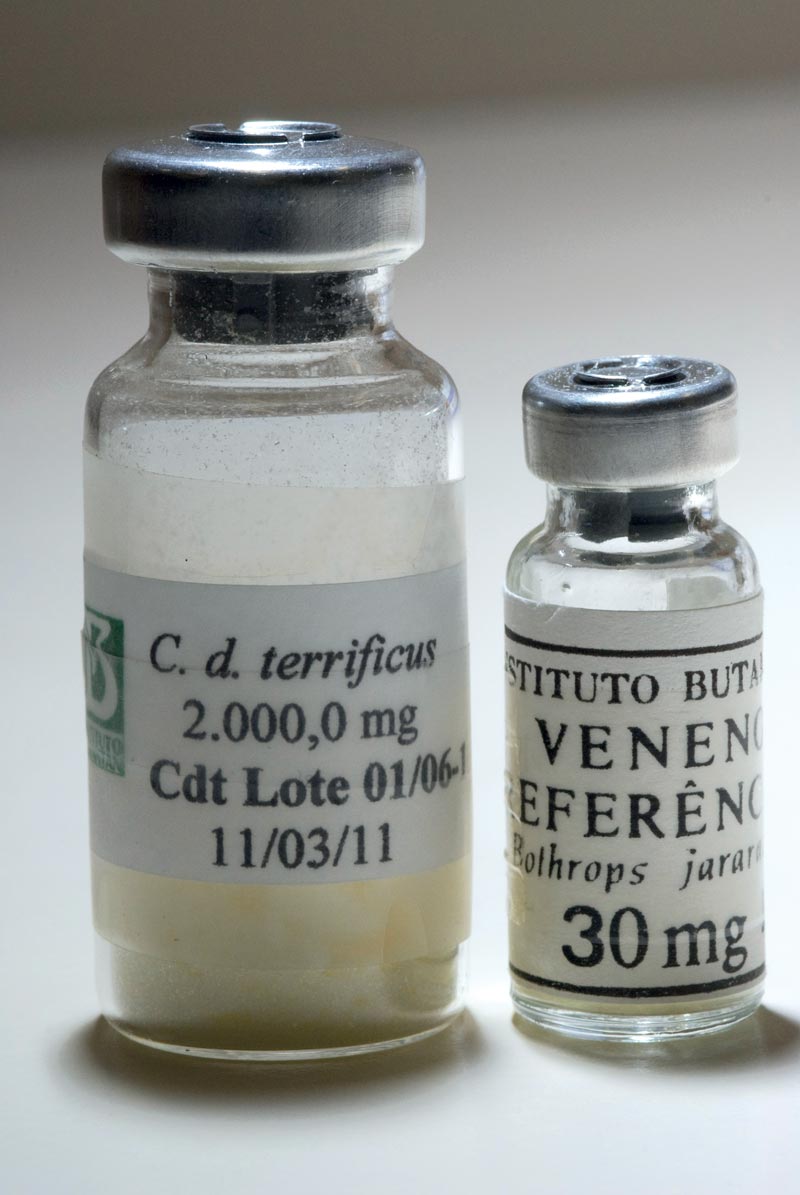 The implementation of other stages of production of the Covid-19 vaccine depends on the pace of the pandemic, which will determine the need for mobilizing production teams and equipment. One of the production units is under renovation, with funding from the Everyone for Health initiative, totaling R$50 million, and should be ready in October of this year to receive the equipment being purchased. “As it will be a multi-purpose plant, if it is not used to produce the Covid-19 vaccine, it can serve for us to use cell cultures to resume production of others for which we stopped the entire manufacturing process,” informs biologist Ricardo das Neves Oliveira, director of production.

In his opinion, due to inadequacies regarding new rules for best practice in production, established by ANVISA, in 2010 the institute stopped producing vaccines for rabies, tetanus, pertussis (whooping cough), and diphtheria—from that point these have been imported and then packaged or labeled at the institute. “The decision at the time was to stop production, given the challenges to meet new requirements,” he comments. Out of the seven types of vaccines supplied to the National Immunization Program, the only one produced completely by the institute is for influenza. Butantan also produces 17 types of serums for neutralizing toxins from serpents, scorpions, spiders, as well as the effects of the rabies virus and the bacteria that causes tetanus, diphtheria, and botulism.

Flexible production
The institute’s production line continues to be redesigned. Due to diseases that progress or retreat, dissatisfactory results from serums and vaccines, technological discrepancies, difficulties in development or funding, or even uncertain reasons, many projects or production lines have been parked. 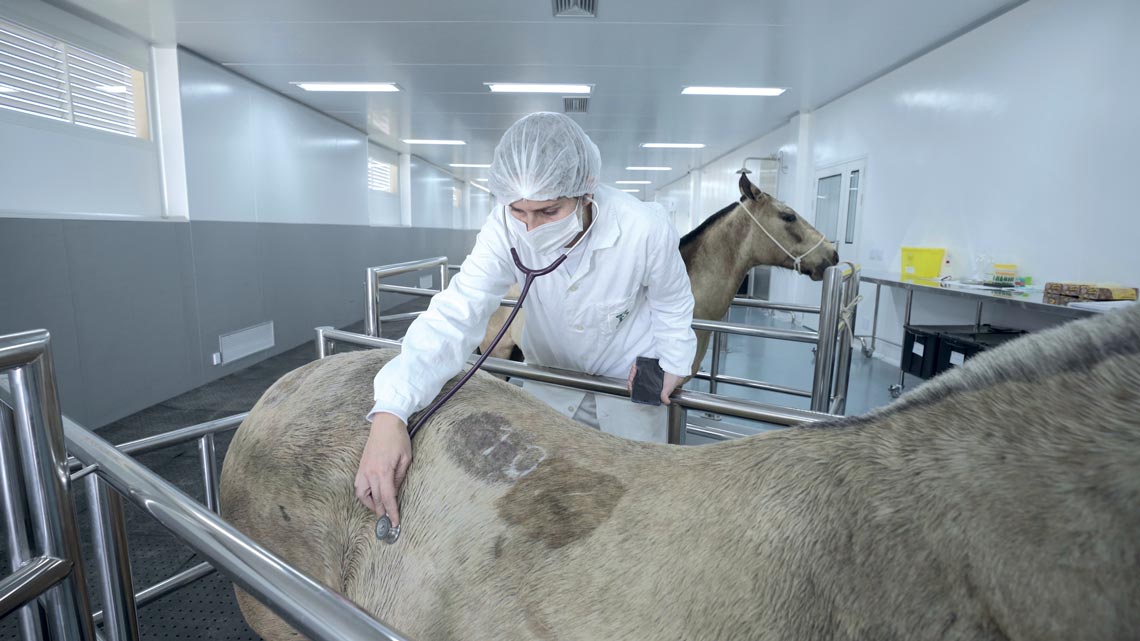 In 1943, Butantan produced penicillin at a semi-industrial scale and used it to treat serious infections. Even though the results were good, as reported in the magazine Memórias do Instituto Butantan (Memories of the Butantan Institute), in 1944, management decided that this responsibility for production would be best transferred to private companies, as it was not possible to acquire the necessary investment to meet the growing needs. In the 2010s, for various reasons, pulmonary surfactant—made from waste material from pigs and used to treat premature newborns with breathing difficulties (see Pesquisa FAPESP nos. 70, 121 and 147), did not continue, nor did the factory of hemoderivatives which, besides funding challenges, faced competition from the Brazilian Company of Hemoderivatives and Biotechnology (HEMOBRAS), linked to the Ministry of Health (see Pesquisa FAPESP issue no. 147).

Agreements with other research centers or facilities help to buy time, but they do not resolve all the issues. One example is the dengue vaccine, which began development in 2009 with the National Institutes of Health (NIH) in the United States (US). The team, led by bacteriologist Neuza Gallina, developed industrial production methods and a vaccine formulation using freeze-dried virus (dehydrated and frozen in a vacuum), which could be easily transported and stored in common refrigerators, similar to other vaccines. 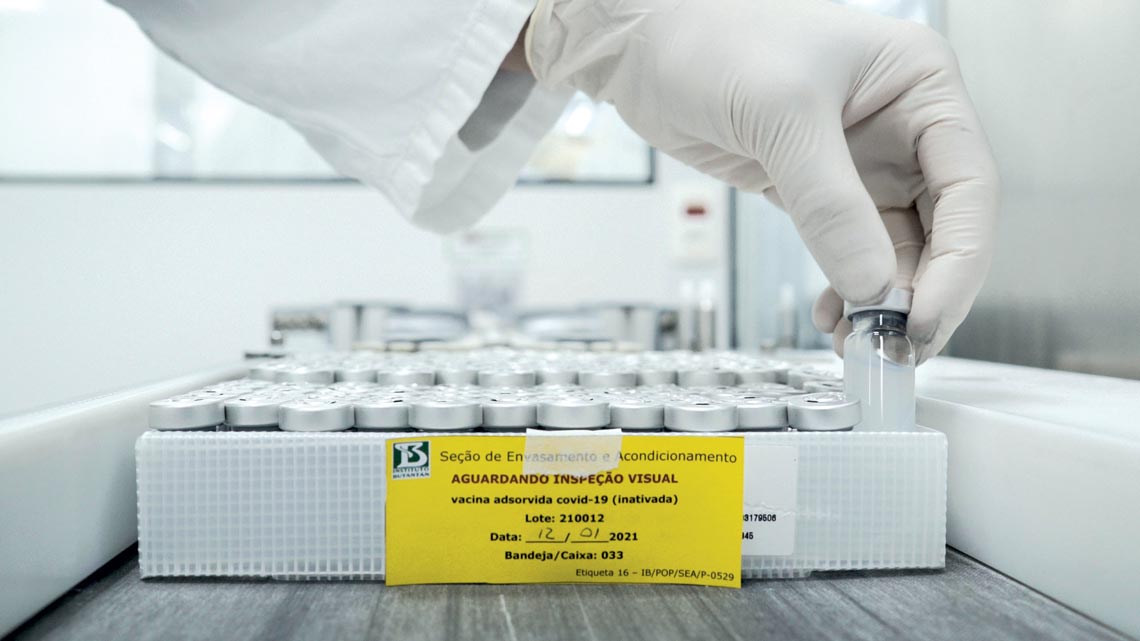 The initial formulation, TV003, which demonstrated efficacy in US trials in people who had not been exposed to the virus, is produced with four proteins—one for each type of virus—which should be refrigerated at -70 degrees Celsius (°C). They are only mixed at the time of application. In the phase 2 clinical trial, carried out in São Paulo from November 2013 to September 2015, with 300 people between 18 and 59 years of age, the São Paulo version using freeze-dried virus, called Butantan-DV, showed results equivalent to those of the original North American formulation: both induced the production of antibodies and defense cells in people with or without previous contact with one of the four serotypes of the dengue virus, as outlined in an article published in March 2020 in the magazine The Lancet Infectious Diseases (see Pesquisa FAPESP issue no. 291). The phase 3 trials, involving 17,000 participants, began in 2016 and should finish toward the end of this year. Researchers had to monitor participants longer than normal to be sure of the formulation’s safety, after unforeseen events with that of another producer.

There are two other reasons for the apparent satisfaction of those who circulate in the institution’s administrative center. The first is the growing demand for the courses at Butantan Institute’s Technical College (ESIB), despite the pandemic. Formalized in December 2018 to integrate close to 35 specialization or post-graduate courses that were previously dispersed, the first online course about snake poisoning received 50 registrations in one day, 100 on the second, and 200 on the third. 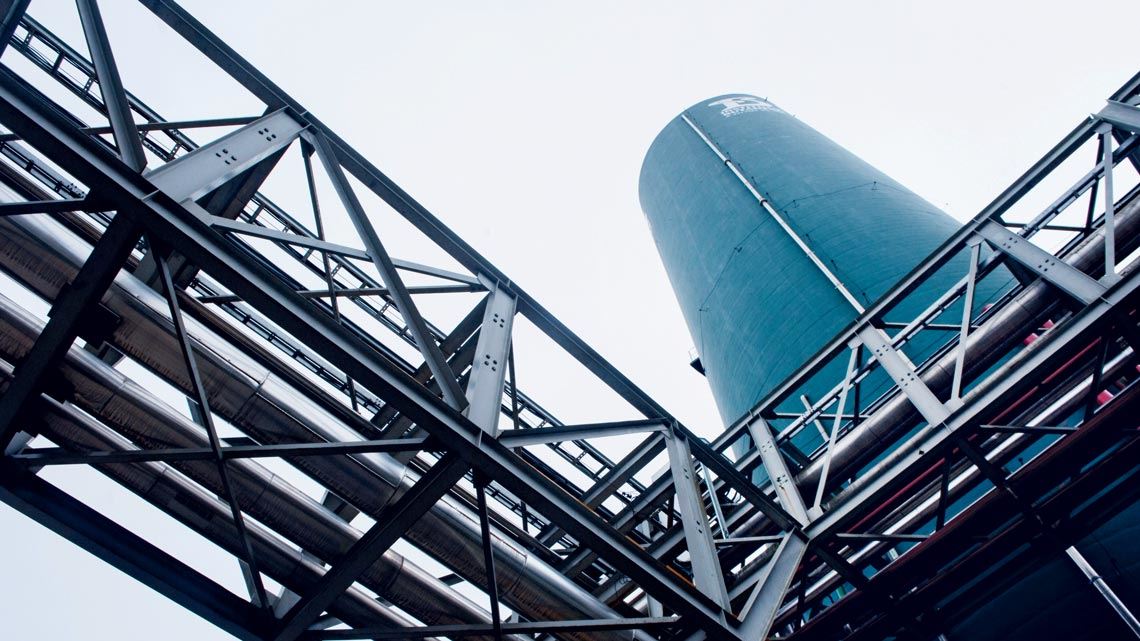 Using facilities such as this, Butantan plans the production of monoclonal antibodies for cancer therapyLéo Ramos Chaves

The second reason relates to expansion plans. According to Oliveira, director of production, construction is complete for the monoclonal antibody production unit for cancer and autoimmune diseases, with the capacity to begin activity at the end of 2021, following certification by ANVISA. Plans also include recovering the vaccine production units that were disapproved by ANVISA—a project estimated at US$500 million—increasing the quantity of doses for the flu vaccine and for serums. “We have improved the collection and utilization of equine plasma, which should increase serum productivity,” says pharmacist Rui Curi, executive director of the Butantan Foundation. “We also want to produce freeze-dried serum, which will be much easier to transport and store, in addition to having increased validity.”

The building plans for basic science include construction of a central animal facility, scheduled for completion in 2032, and moving laboratories that are currently in older buildings to more adequate, safer facilities. “We are taking the impetus to face the next 20 years,” says Vessoni. However, there is a persistent long-time problem: consistent employee turnover. “Half of the leaders of the research groups are of retirement age, without anyone to replace them,” she says. “The generation that started in the 1980s is leaving, without successors,” emphasizes public health physician Nelson Ibañez, coordinator of the special laboratory of the History of Science at the institute. “We urgently need to create a new base of researchers to keep the institute alive.”