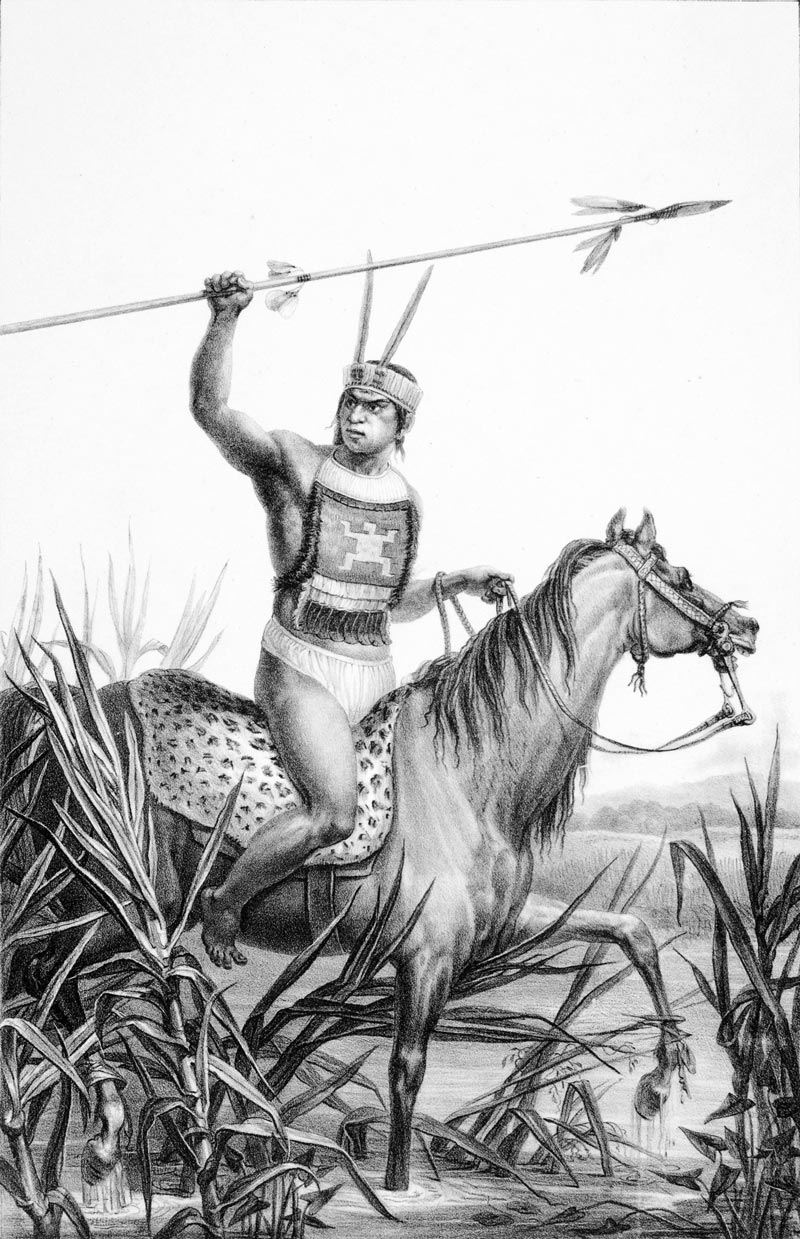 Illustration of the chief of the extinct wild Charrúa tribe, indigenous people of southern Brazil whose mitochondrial DNA was studiedReproduction Debret and Brazil, Capivara

Most of the genetic diversity of the pre-Columbian peoples who inhabited Brazil’s three southern states and Uruguay is preserved in today’s mixed-race urban populations, who have both indigenous and European ancestry. However, this diversity has disappeared among members of communities now living on tribal reservations. The mestizos—of mixed Amerindian and Portuguese ancestry—have nearly five times more mitochondrial DNA lineage (genetic material inherited only from the maternal side), originating from these ancestral peoples than do modern-day Amerindians. This seemingly paradoxical situation can be explained by two circumstances associated with European colonization at the southern end of South America beginning in the sixteenth century. First, the extinction of the vast majority of the indigenous population, which led to the disappearance of many mitochondrial DNA strains among the small number of the remaining peoples, and second, the high birthrates of mestizo children with European fathers and indigenous mothers, in whose descendants a higher number of maternal genetic lineages of Amerindian origin have been preserved.

This scenario is described in a study by researchers from the Federal University of Rio Grande do Sul (UFRGS) published in April in the American Journal of Human Biology. The study analyzed published data on mitochondrial DNA from 309 mixed-race individuals living in the southern states and Uruguay and from 396 living indigenous peoples of the Tupi-Guarani and Jê linguistic branches. These sequences were also compared to previously published DNA from an individual of the extinct Charrúa people. Genetic samples from the mestizo population, which is no longer recognized as Amerindian, originated from individuals living in cities in areas originally occupied by these indigenous groups approximately 20 generations ago. The study found only 27 lineages of mitochondrial DNA, technically called haplotypes, among the indigenous population and 131 in the mixed-race individuals.

“The only explanation for this great genetic diversity among mestizos is that it must reflect the situation that existed among pre-Columbian native peoples before their contact with Europeans” explains UFRGS geneticist Maria Cátira Bortolini, one of the authors of the study, which was based in part on the master’s thesis of her former student, Gustavo Tavares. Approximately 95% of the mitochondrial DNA lineages of the Amerindian peoples, which began settling the Americas approximately 15,000 years ago, are grouped into four major groups, called haplogroups A2, B2, C1, and D1. Of the few lineages present in the remaining native peoples of the southern region, almost two-thirds are from haplogroup A2. Among the mixed-race population, haplogroup A2 lineages represent only a quarter of the total, and haplogroup C1 lineages, the most frequent, represent more than 40% of the total.

Genetic diversity is defined by the quantity of changes and mutations in the DNA that characterize the differences between individuals within a population group. Genetic material from larger populations tends to show more variation than that from small groups of individuals. “A larger population has more people and therefore more segregating lineages, and more mutations being introduced” says Bortolini. The group in Rio Grande do Sul opted to analyze mitochondrial DNA because this segment of the genome makes it possible to clearly differentiate between European and African lineages in the members of a population, which facilitates the isolation of the indigenous contribution from the genetic material. Because the mitochondrial DNA mutation rate is known, this type of genetic material can be used like a molecular clock and provide clues to the past about the size of an ancestral population during a given period and the evolution, in numerical terms, of its descendants.

According to the calculations of the UFRGS researchers, it would have taken a few thousand years for mitochondrial DNA to accumulate all the mutations and variations currently found in the mestizo population living in the three southern states. Analyses of the genetic samples from these mixed-race individuals indicate that there was a process of population expansion among Amerindians approximately 15,000 years ago, more or less when Homo sapiens set foot in the Americas. They also suggest that approximately 500 years ago, when the European colonizers arrived in the Americas, the Amerindian female population living in the present-day territories of Rio Grande do Sul, Santa Catarina, and Paraná could have numbered almost 200,000 women.

There is no consensus among historians as to how many Amerindians, men and women, lived in southern Brazil before the arrival of the European conquistadors. The most widely accepted estimate suggests an indigenous population of approximately 250,000 individuals. If that number is correct, the mitochondrial DNA present in the Amerindians of southern Brazil today reflects the genetic material of only 0.3% of the pre-Columbian Amerindian population. “The low genetic diversity among modern indigenous people indicates that the size of the ancestral Amerindian population was reduced by 300 times after the Europeans’ arrival” says Bortolini.

For anthropologist Ruben Oliven, also from UFRGS (but not a researcher in the study), the result of the research aligns with the history and construction of the southern state’s gaucho cultural identity. “The figure of the Native was incorporated into the state’s cultural image of the gaucho in an ambiguous way” explains Oliven. “The indigenous people have always been portrayed as brave, heroic types who rode horses and lived close to nature. Many Rio Grande do Sul residents like to say they have ‘indigenous blood,’ which is probably true.” The recognition of Guarani culture as a formative element of the state’s society, however, is recent. “In the 1940s, for example, many people did not accept the image of Sepé Tiaraju (1723–1756) as a regional hero” notes the anthropologist, referring to the rebellious indigenous leader of the Seven Peoples of the Missions in the eighteenth century. The UFRGS researchers estimate that 20% of the state’s modern-day residents have indigenous mitochondrial lineages.