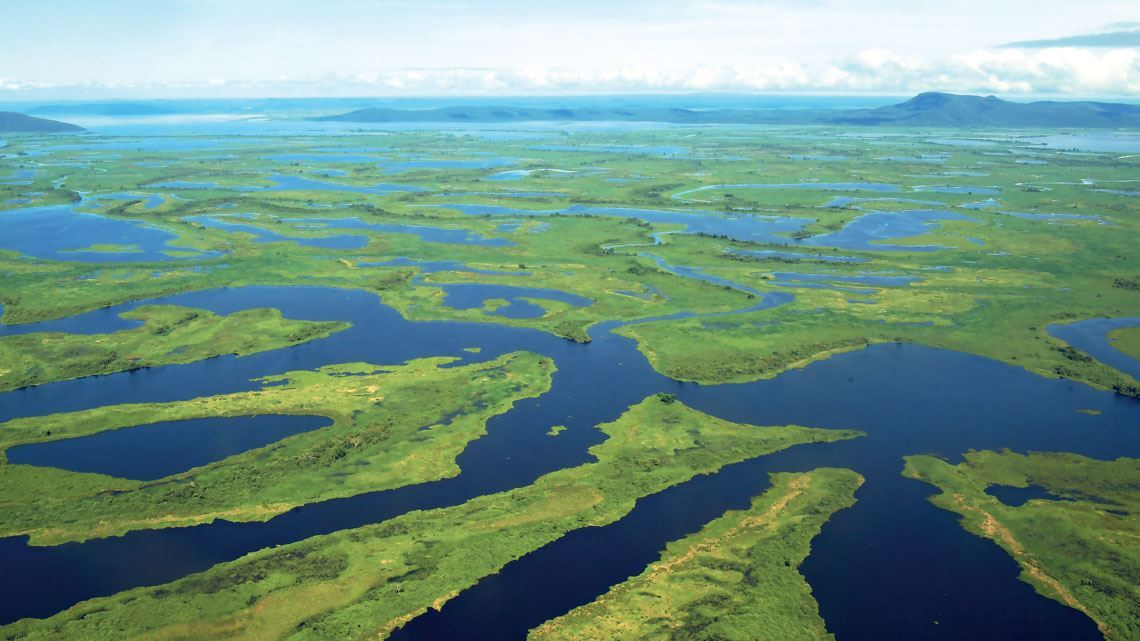 Mosaic of winding rivers and lakes in Mato Grosso

When talking about the Pantanal, the first thing that comes to mind is usually rivers winding through great forests, and lakes frequented by herons, storks, and alligators. The landscape of this ecosystem, one of the most extensive wetlands in the world, is closely linked to the presence of water. Although it is the smallest of the six biomes in Brazil, it is larger than Greece, England, and a hundred other countries. It is also the best-preserved, despite the fact that its natural fields have increasingly been turned into pasture for beef cattle in recent decades. In 2019, the Pantanal still had 84% of its native vegetation, according to the most recent survey by MapBiomas, a project that tracks deforestation and changes in land use in Brazilian ecosystems. Precipitation is high and variable, ranging from 1,000 to 1,500 millimeters per year, with most rain falling between October and April. The water that keeps up to 80% of the biome flooded for most of the year, however, is carried to the region by rivers that originate at higher altitudes near the Amazon to the north and the Cerrado (wooded savanna) to the east.

Water, although fundamental, is not the only element that defines the landscape of the Pantanal. According to studies by researchers at the Federal University of Mato Grosso do Sul (UFMS), fire also influences the distribution and abundance of plant species. Sporadic, smaller outbreaks—not the long, intense fires seen this year, which could devastate the land for an as yet unknown length of time—actually reduce the abundance of species sensitive to fire and encourage the growth of more resistant vegetation in its place, altering the landscape. “The Pantanal needs fire to make it what it is,” says UFMS ecologist Danilo Bandini Ribeiro, who is investigating the effect of fires on the region’s fauna and flora. “Water and fire work in a similar way to structure the vegetation. They make the landscape more open,” explains the researcher, who leads a project in the Kadiwéu Indigenous Reservation in Mato Grosso do Sul, which has been showing that the controlled use of fire to eliminate excess grass biomass from open landscapes helps prevent large fires.

Fields of grass and shrubs represent 7.9 million hectares (52.4%) of the Pantanal, a third of which is temporarily or continuously flooded, according to MapBiomas. Concentrated along rivers and its wettest region in the west, forests cover 19.6% of the biome. Another 9.2% is composed of vegetation typical to the Cerrado, located to the east. The diversity of flora and fauna in the Pantanal is lower than in the Amazon, the Cerrado, and the Atlantic Forest. There are about 2,500 plant species and 1,213 vertebrates (580 birds, 271 fish, 174 mammals, 131 reptiles, and 57 amphibians), of which it is estimated that only 5% are exclusive to the Pantanal. The rest also inhabit the Cerrado or the Amazon, both of which are important sources of biodiversity in the Pantanal, as are the Chaco Plains and the Atlantic Forest. 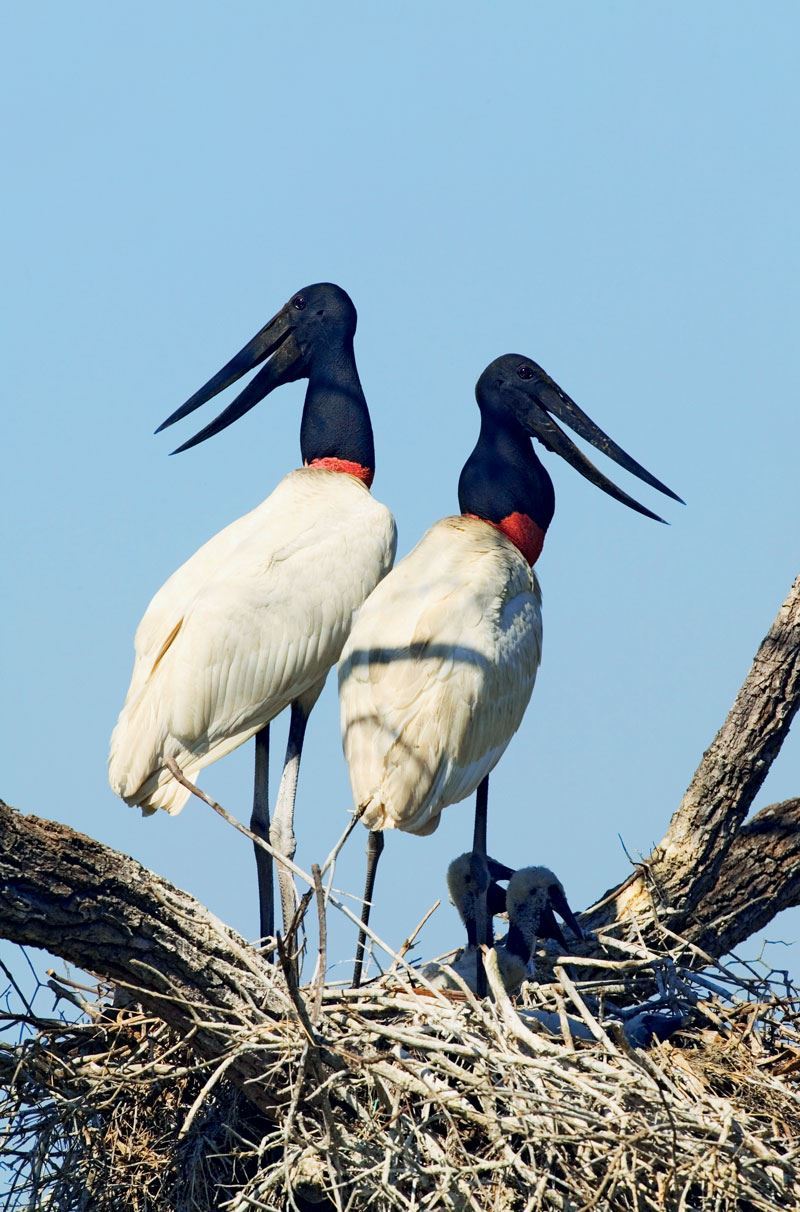 Jeremy Woodhouse / Getty Images The lower number of species exclusive to the Pantanal, however, is counteracted by large populations of some animals. Some species that are common across multiple biomes are much more easily found in the Pantanal, such as the jaguar (Panthera onca), the giant otter (Pteronura brasiliensis), the pampas deer (Ozotocerus bezoarticus), the hyacinth macaw (Anodorhynchus hyacinthinus), and the jabiru (Jabiru mycteria). “The alternation between floods and droughts creates two very different environments that provide animals with food and shelter,” says zoologist Neiva Guedes of Anhanguera-Uniderp University, whose preservation work helped lift the hyacinth macaw off the list of endangered species.

Since the region’s climate stabilized 18,000 years ago, the oscillating water level, caused by annual flood pulses in the rivers, has molded the landscape. The level and duration of the floods, as well as the quality of the soil, create ideal conditions for a diverse range of vegetation. Temporary or permanent lakes and bays inhabited by submerged, emergent, and floating aquatic plants are found beside flooded grassy plains and islands (known as capões) or corridors of forest inhabited by species from the Cerrado and the Amazon. “The difference of a few meters in elevation, but with the same rainfall patterns, leads to the formation of aquatic plants alongside forests,” says agronomist and botanist Arnildo Pott, a senior visiting professor at UFMS and an expert in the Pantanal’s vegetation.

It was Pott and botanist Geraldo Alves Damasceno Júnior, also from UFMS, who 20 years ago began to examine in detail how the interaction between water and fire influences the structure and regeneration of vegetation formations in the Pantanal. In 2011, in the region of Corumbá in the north of Mato Grosso do Sul, their research group analyzed the resprouting capacity of 7 species of shrubs, 17 trees, and 25 vines (lianas) in forest areas that had suffered sporadic fires in the previous decade and compared them with the same species in areas without fires. One of their conclusions, presented in a 2014 article in the journal Forest Ecology and Management, is that natural flooding of the Paraguay River plays a crucial role in shaping the environments and species that live in them. “Flooding restricts the number of species because water fills the pores in the soil and decreases oxygen availability,” explains Damasceno. Fire, meanwhile, altered species distribution, which decreased in flooded areas and increased in the higher, dryer areas. 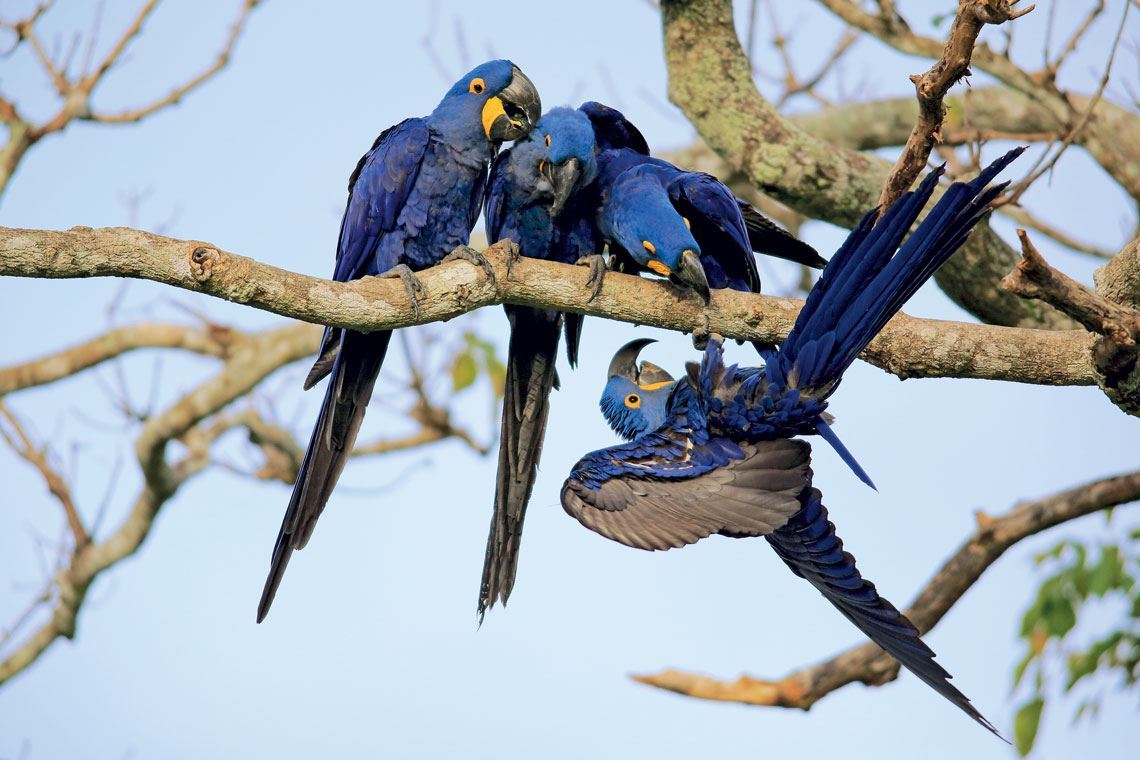 In another region close to Corumbá, the group analyzed the effects of water and fire on 39 tree species. The forests in the area are dominated by Inga vera, Gardnerian triplaris, Ocotea diospyrifolia, and Crateva tapia. In general, each species responds differently to water and fire, with some becoming more frequent in higher areas after repeated fires, the researchers concluded in an article published in PLOS ONE in 2016. Inga vera and Bactris glaucescens, for example, sprouted faster and had more specimens in places where fires had burned.

The interaction between fire and water was also important to preserving one of the Pantanal’s characteristic types of vegetation: monodominant formations. Easily recognizable, these are large areas, sometimes tens of square kilometers, that are dominated by a single species of tree. One such formation is known as a paratudal, where the Caribbean trumpet tree (Tabebuia aurea), a tree with yellow flowers whose bark is used to treat various health problems, is predominant. Damasceno and his team recently studied the influence of fires and floods in paratudals in southern Mato Grosso do Sul, finding that the alternation between floods and fires favors the Caribbean trumpet tree over the 35 other species found there. According to the article, set to be published in Forest Ecology and Management in 2021, some species were tolerant to fire and others to floods. Only Tabebuia aurea thrived in both conditions. 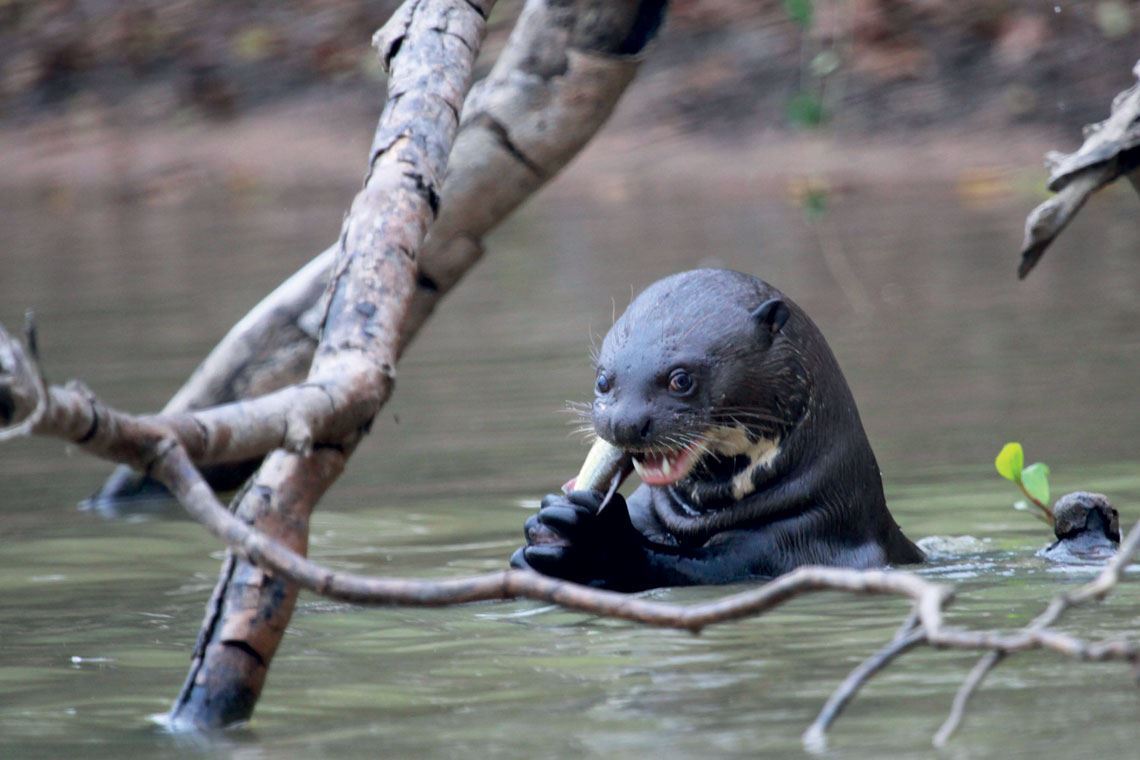 One reason for the Pantanal’s ability to recover is its soil, which contains many tiny seeds from aquatic, amphibious, and terrestrial plants that can survive both fires and floods and germinate when the conditions are right. In soil samples collected from the bottom of temporary lakes and their surroundings in the Miranda region, Pott and botanist Francielli Bao found seeds from 70 different plant species. At UFMS, they tested the soil samples under two conditions: three months submerged in water tanks and three months exposed to the air, simulating a post-flood scenario. They found that in the first condition, aquatic and amphibious plants sprouted. Land-based plants only germinated in the dry conditions. “The soil in the Pantanal has a flexible seed bank, with species resistant to both conditions, which allows vegetation to survive floods, fires, and herbivorous animals,” says Pott, who first came to the region in the early 1980s as a researcher for EMBRAPA.

In an experiment conducted in 1986, he found that the presence of cattle is not necessarily harmful to the Pantanal’s landscape, especially for native fields. To understand what the vegetation would have been like before the introduction of cattle in the eighteenth century, Pott fenced off a 600-hectare area of Nhumirim farm, owned by EMBRAPA. A year later, the previously short grass had grown tall. Two years later, a fire consumed all the vegetation, which started to resprout days later. “I noticed that the presence of cattle could actually help prevent fires and I coined the expression ‘firefighter-cow’, which has now been politicized,” says the botanist. 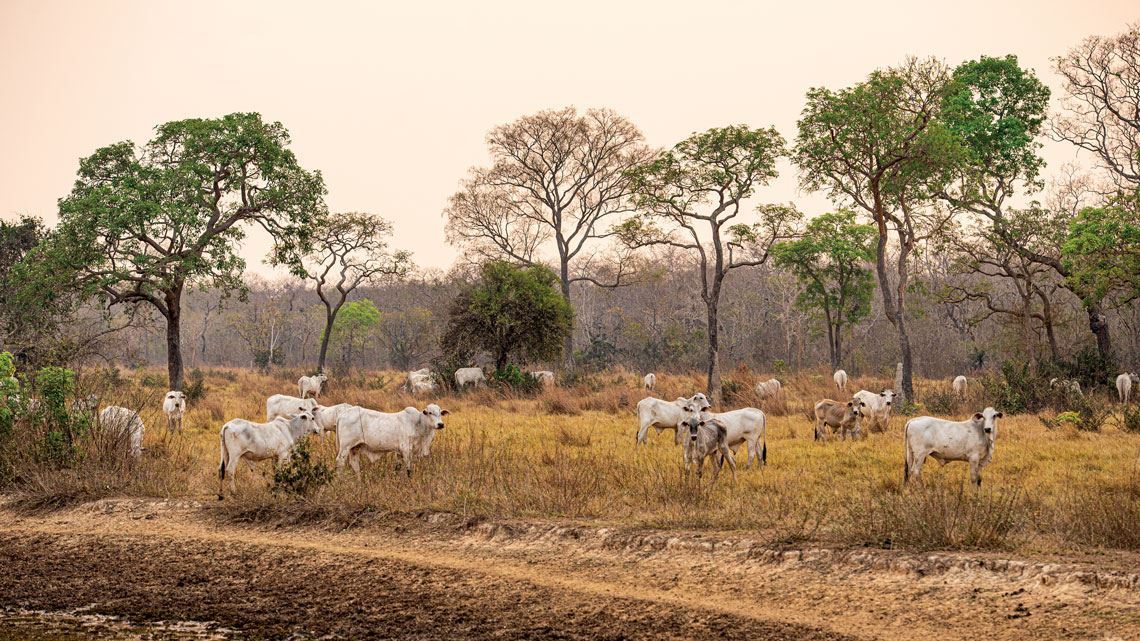 Today, the driest areas away from the rivers are home to about 3.8 million oxen and cows, bred in huge numbers to be sold for fattening, mainly in the plateaus surrounding the Pantanal. Increasing the quantity of animals in these locations, as has been suggested, is not a good way to contain fires, say several researchers. “The most sustainable method of production is to raise cattle in native pastures with a lower number of heads per hectare, as the traditional inhabitants of the Pantanal do,” says UFMS ecologist Letícia Couto Garcia, a specialist in ecological restoration and conservation. Since 1985, the area used to raise cattle on exotic pastures has increased by 4.7 times, reaching 2.3 million hectares.

Biologists and ecologists say that adopting continuous measures to maintain the landscape and impede the accumulation of dry biomass is essential to preventing large and frequent fires, which can cause long-lasting and significant damage even to vegetation resilient to fire. The effect of fires on wildlife can be even more devastating. “Reptiles and amphibians are generally unable to escape fires much smaller than the ones seen this year, which have even killed mammals,” says Neiva Guedes, who is also head of the Arara Azul Institute. “Fire can cause local extinctions, and the animals that survive will face a more hostile environment, with fierce disputes for food and shelter,” she says. This has been the case even for macaws, which have been observed in some wildlife refuges eating burnt food.