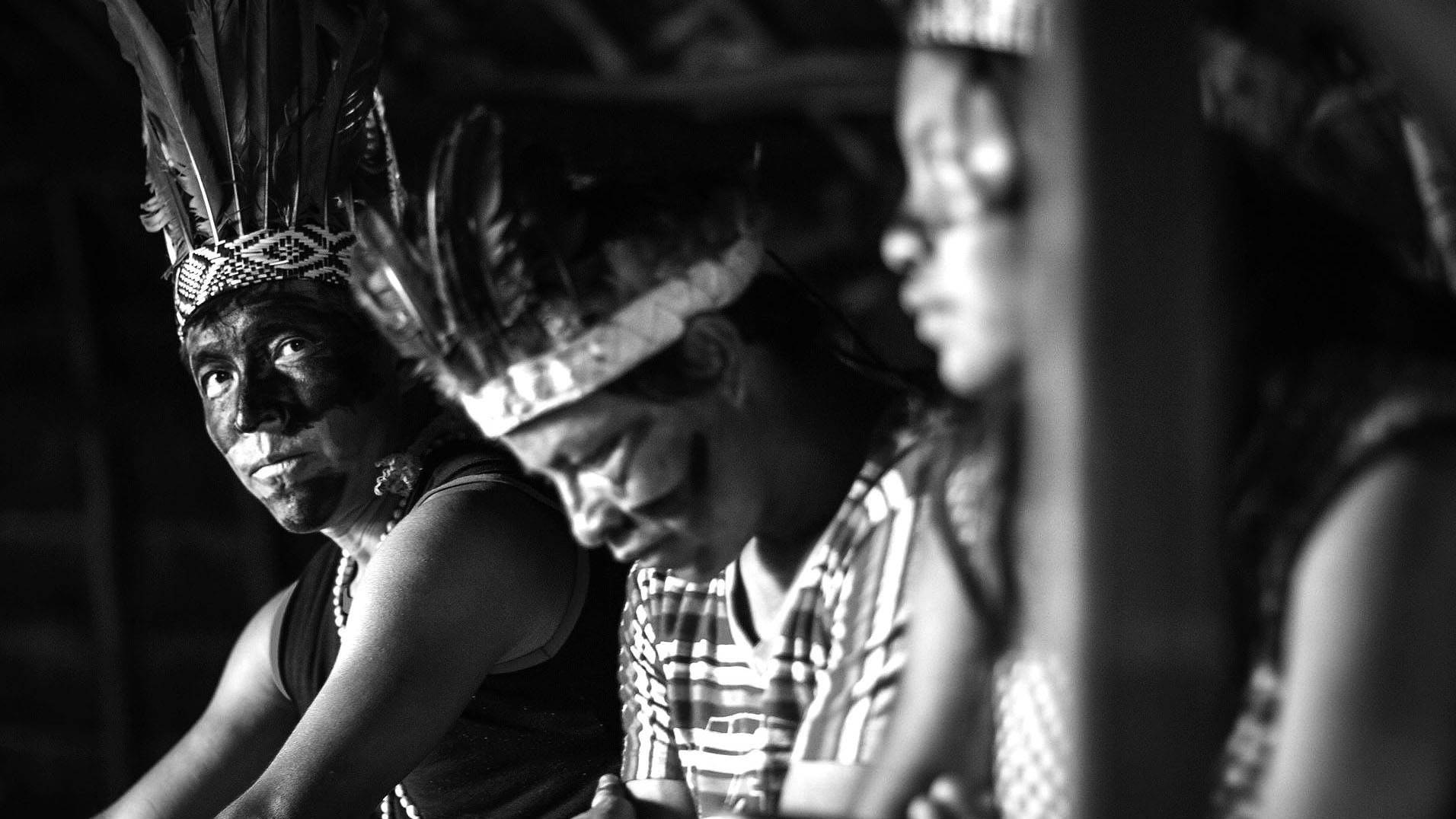 Indigenous people from the Guarani-Kaiowá ethnic group, speakers of Tupi

Over a period of nearly 10 centuries, the native Tupi speakers of South America prospered and dispersed over vast areas of the continent. In a demographic and migratory event that began almost 3,000 years ago, they left the southwest of the Amazon, crossing rivers and land until they occupied the Atlantic coast at the foot of the Andes, even reaching south of the La Plata River—some of these territories are more than 5,000 kilometers (km) apart. Known as the Tupi expansion, the diaspora lasted more than a millennium and may only be paralleled by the spread of Bantu speaking peoples from west to central and southern Africa, which occurred in around the same time period.

An analysis of the genetic characteristics of 75 individuals from 13 current Tupi-speaking peoples suggests that this territorial expansion may have been accompanied by significant demographic growth, with the Tupi population multiplying by 100. By comparing genome stretches from members of these ethnicities, a team led by Tábita Hünemeier, a geneticist from the University of São Paulo (USP), concluded that the population increase started around 2,100 years ago and reached its peak around the year 1000 AD, when according to calculations, the Tupi population may have totaled 4 to 5 million individuals, almost equalling the population of the Incan Empire that would occupy the Andes mountain range centuries later.

Immediately after the peak, the vast Tupi nation began a sharp decline over the following five centuries, worsened by the arrival of European colonizers, according to figures presented in an article published in the journal Molecular Biology and Evolution on December 7, 2021. “We had no idea how devastating the Tupi population decline may have been. Previous estimates suggested a 90% decrease. Our data indicate that it was 99%, surpassed only by the collapse of the Aztecs after the arrival of the Spanish conquistadors,” says Hünemeier.

“This paper is everything an archaeologist wants to read about the Tupi expansion, because it provides genetic information to a debate that until now was based on archaeology and linguistics,” says Adriana Schmidt Dias, an archaeologist from the Federal University of Rio Grande do Sul (UFRGS) who specializes in indigenous history and pre-colonial archaeology.

The major population growth suggested by the genetic analysis reinforces a hypothesis presented in 1984 by archaeologist José Proenza Brochado. Based on evidence that ancestors of the Tupi-speaking peoples produced ceramic objects and practiced an early form of agriculture, Brochado proposed that the Tupi diaspora was driven by continuous population growth and the need for new land to produce food, rather than climate change. In the 1920s, anthropologists and linguists theorized that as the climate caused the rainforest to shrink, the ancestors of Tupi speakers, who survived by hunting, fishing, and gathering, were forced to migrate in search of food (see Pesquisa FAPESP issue nº 288).

One impact this expansion may have had at the time is the likely cultural assimilation of the Kokama people from the Peruvian Amazon. The Kokama have been speaking Tupi for many generations, but the USP team found that they are genetically much more similar to their Arawak-speaking neighbors, the Chamicuro, than to other Tupi-speaking groups. “This may be the first confirmation of cultural assimilation as a result of the Tupi expansion, something that has been suggested by linguistic studies but never demonstrated by other approaches,” says Hünemeier.

The estimates of what happened to the Tupi population over the course of almost 100 generations is part of a broader analysis by the USP team, which has been attempting to understand how native ethnic groups interacted before Europeans arrived in South America and how the influences that they had on each other shaped today’s indigenous groups. In the paper published in Molecular Biology and Evolution, which was based on one of the largest samples of genetic material from South American native populations ever studied, lead author Marcos Araújo Castro e Silva also compared the genetic characteristics of the Tupi-speaking groups against 229 individuals from 39 indigenous peoples that speak other languages from across central Brazil, the Amazon, the Andes, and the Pacific coast.

This comparison, part of Castro e Silva’s doctorate under Hünemeier’s supervision, led to a conclusion that contradicts the long-held belief of many archaeologists and anthropologists: that due to the physical separation of the Andes, the peoples from the Andean highlands and the Pacific coast in the far west of the continent would be genetically distinct from the inhabitants of the vast lowlands, forests, and savannas of the east. But the study identified no major differences.

Perhaps influenced by the historical narrative of the Spanish conquistadors who invaded the Andes and like the Incas, saw the Amazon rainforest as fearsome and impenetrable, this theory—known as Andes-Amazonia Divide—only began to be questioned more vigorously in the last 15 years. For a long time, scholars of the native peoples of South America have seen the uniquely extreme and sudden change in landscape between the peaks of the Andes and the lowlands of the Amazon as an almost insurmountable physical barrier. As a result, the populations that arrived in South America at least 15,000 years ago and settled in the east and west of the continent would have had little contact. This theory was supported by historical evidence and even early genetic data that indicated that the Andes and the Pacific coast were home to large, complex, connected societies, while the Amazon was dominated by small, isolated groups.

In the new study, the USP team did not observe a marked genetic difference between present-day peoples in the east and the west, which would be expected if there was a clear Andes-Amazonia divide. Instead, the data show a gradual transition from east to west, with a slight but noticeable increase in genetic diversity, explained by the fact that the mountains and the Pacific coast were home to populations that were at times very large and well connected, encouraging greater homogeneity across different groups over the generations, with no loss of diversity. Smaller populations with less contact, such as those in the lowlands of the Amazon, tend to be less diverse and more internally homogeneous, as well as more distinct from other populations. “Native peoples from the Amazon may have the lowest genetic diversity in the Americas—and probably among the lowest in the world,” says Castro e Silva.

Despite the lower diversity, there was no genetic isolation between east and west. The peoples of western Amazonia and the eastern slopes of the Andes maintain a genetic connection with those from the highlands and the Pacific coast, similar to the link observed between them and groups from further east in the Amazon. As a result, the Kokama and the Chamicuro in Peru and the Paiter, Karitiana, Munduruku, and Gavião, in the western Amazon would function as bridge populations between those in the east and west of the continent. While contact—and consequent genetic exchanges—between peoples in the lowlands of Amazonia and those in the Andes and on the Pacific coast decreased after the arrival of European colonizers, it was much higher in the pre-Columbian period, as shown by the existence of identical genome segments in different current populations.

“The genetic mixture of Andean and Amazonian lineages in populations from the eastern slopes of the Andes eliminates any misconceptions about a strict divide between the Andes and Amazonia, but we have yet to reconcile these genetic findings with cultural evidence of trading and exchanges in the opposite direction, from the Amazon to the Andes,” Chiara Barbieri, an Italian molecular anthropologist from the University of Zurich, Switzerland, who years ago visited South America and collected genetic samples from Andean peoples in Peru, Colombia, and Bolivia, told Pesquisa FAPESP