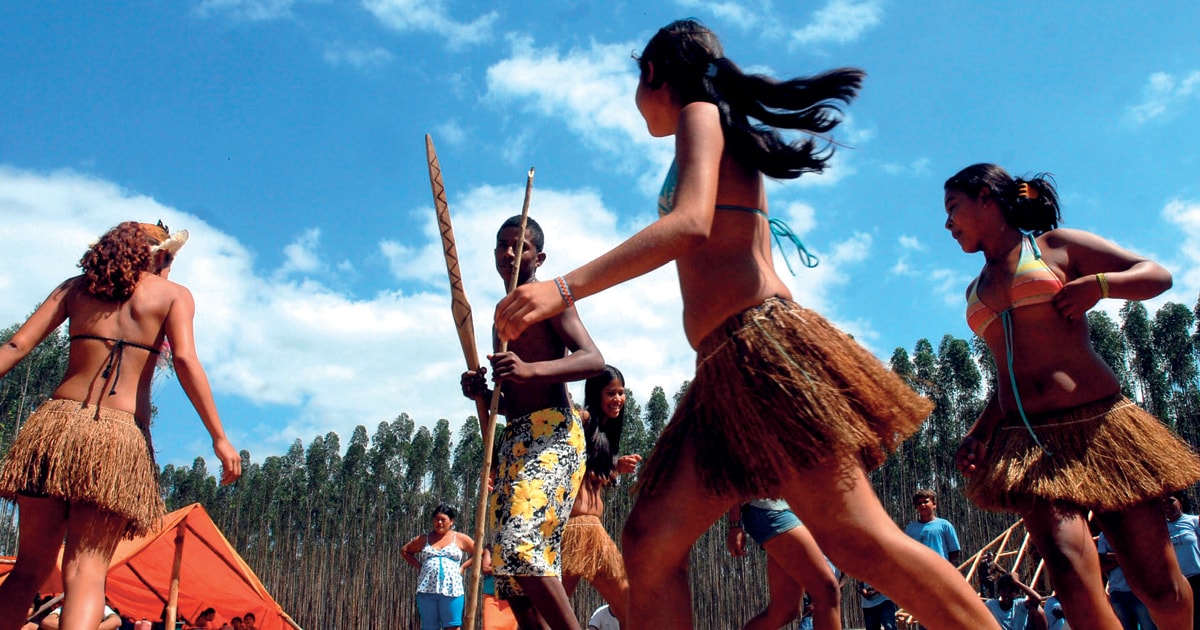 Some 2,500 members of this ethnic group, like those pictured above, live across 18,000 hectares of indigenous land in the municipality of Aracruz, Espírito Santo State

Located 80 kilometers north of Vitória, the capital of the Brazilian state of Espírito Santo, the municipality of Aracruz is home to approximately 2,500 individuals who live on three indigenous territories that cover 18,000 hectares, an area equivalent to just over a tenth of the city of São Paulo. Most of them (about 95%) identify as members of the Tupiniquim ethnic group, who met Portuguese explorers in 1500 and were later decimated to the point of disappearing from official historical and demographic records for almost a century.

A genetic analysis published in the journal Proceedings of the National Academy of Sciences (PNAS) in January confirms past reports by the Tupiniquim themselves: they never went extinct, although their declining population led them to miscegenate with European and African descendants. Biological confirmation that these indigenous groups in Aracruz are Tupiniquim means that alongside the Tupinambá, from Bahia, and the Potiguara, from Paraíba, they are among the only living representatives of the Tupi peoples who inhabited the coast when Europeans landed on the beaches of what would later become Brazil. Because this ethnic group from Espírito Santo originated in coastal areas, scientists were able to use their DNA to reconstruct how the Tupi, descendants of groups from southwestern Amazonia, arrived at the coast some 1,200 years ago. 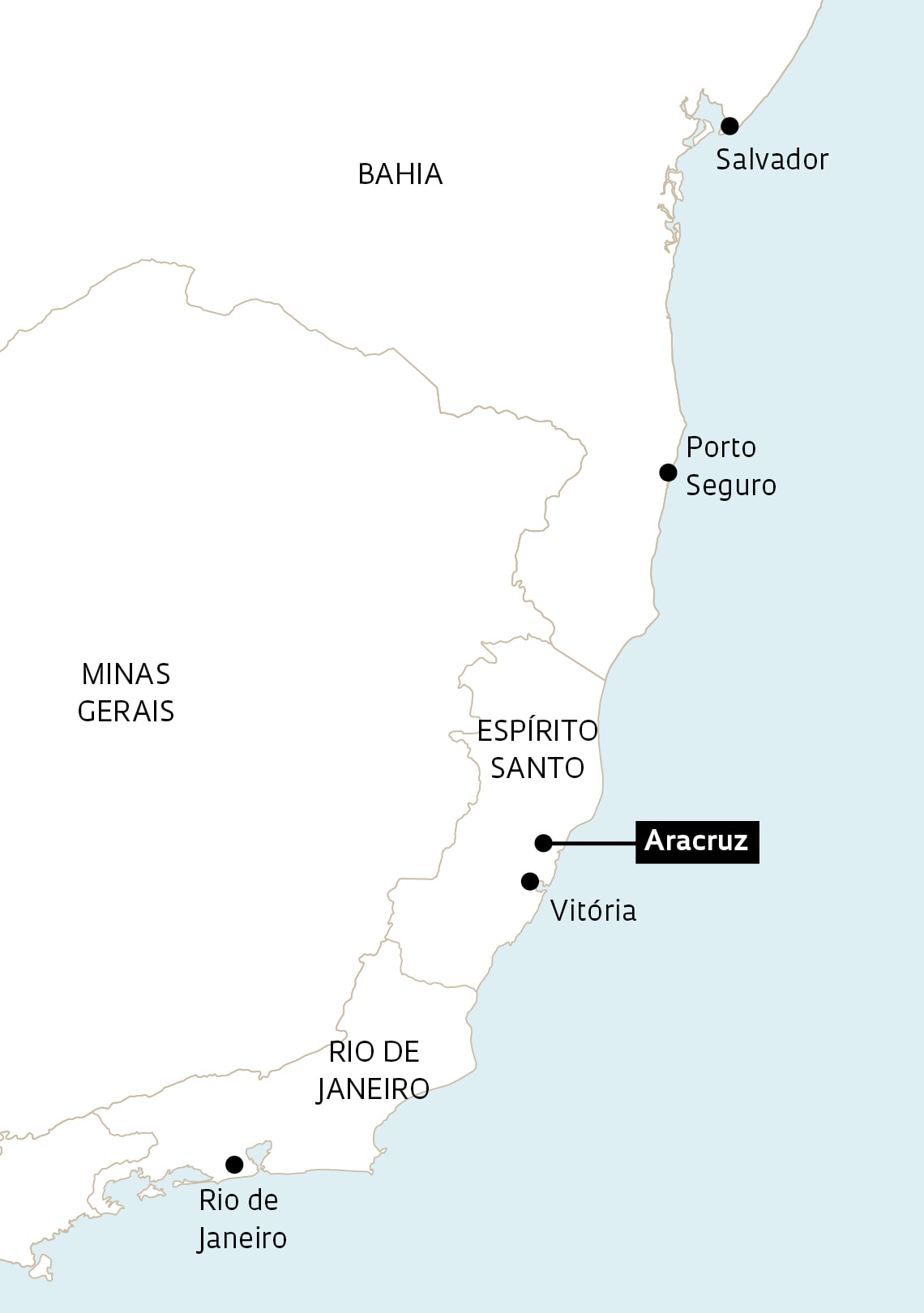 The conclusions presented by Brazilian researchers in the PNAS article were reached by comparing the genetic characteristics of the Tupiniquim from Aracruz with those from 14 other current and extinct indigenous peoples in the Americas (including the Guarani-Mbyá from the south of Brazil, and ethnic groups from the Amazon, such as the Wajãpi, Parakanã, and Gaviã), as well as Europeans and Africans. The genetic material from the Tupiniquim and Guarani-Mbyá was obtained by physicians Alexandre da Costa Pereira, from the Heart Institute at the University of São Paulo (InCor-USP), and José Geraldo Mill, from the Federal University of Espírito Santo (UFES), who have been monitoring the health of these two ethnic groups for almost 15 years. Geneticist Francisco Salzano (1928–2018) of the Federal University of Rio Grande do Sul (UFRGS) collected blood samples from other groups in the Amazon—he also reviewed a preliminary version of the article before he died in 2018, at 90 years of age.

Geneticist Tábita Hünemeier and her team at USP’s Biosciences Institute compared the genetic material from the indigenous people in Espírito Santo with that of other Brazilian ethnicities and found that on average, 51% of the Tupiniquim DNA is of Native American origin (with 26% European and 23% African). Among the Guarani-Mbyá, who migrated from Rio Grande do Sul to Aracruz in the 1960s, the proportion of indigenous genetic material is higher. Their DNA, on average, is 77.3% Native American, 15.6% European, and 7.1% African. The other three ethnic groups studied (the Wajãpi, Parakanã, and Gavião) show no signs of miscegenation with Europeans and Africans.

One explanation for the greater degree of mixing among the Tupiniquim is that they faced population collapse at the time. When Pedro Álvares Cabral and his ships arrived in the region of Porto Seguro, in the south of the current state of Bahia, in April 1500, roughly 3 million indigenous people occupied what is now Brazilian territory, according to estimates by the Brazilian Institute of Geography and Statistics (IBGE). Around 900,000 of them, similar to the population of Portugal at the time, lived on the coast. The Tupiniquim numbered approximately 90,000 individuals, a number now confirmed by the genetic analysis, and occupied a stretch of the coastline from southern Bahia to São Paulo. By 1760, the Tupiniquim population had fallen to about 3,000, and in 1876 it consisted of just 55 individuals. Today there are around 2,400 Tupiniquim, located almost exclusively in Aracruz. They live in brick houses and speak only Portuguese. Their original language, one of 41 in the Tupi linguistic family, was lost due to population reduction and miscegenation.

“The level of indigenous ancestry among the Tupiniquim is still very high, although there are also individuals with a very diverse genetic makeup,” says geneticist Marcos Araújo Castro e Silva, who is studying his PhD under the guidance of Hünemeier at USP and is the lead author of the article published in PNAS. “Even after they almost disappeared, they managed to preserve much of their Native American ancestry,” adds the geneticist. As a point of comparison, Native American ancestry among the general Brazilian population is 7%, on average. 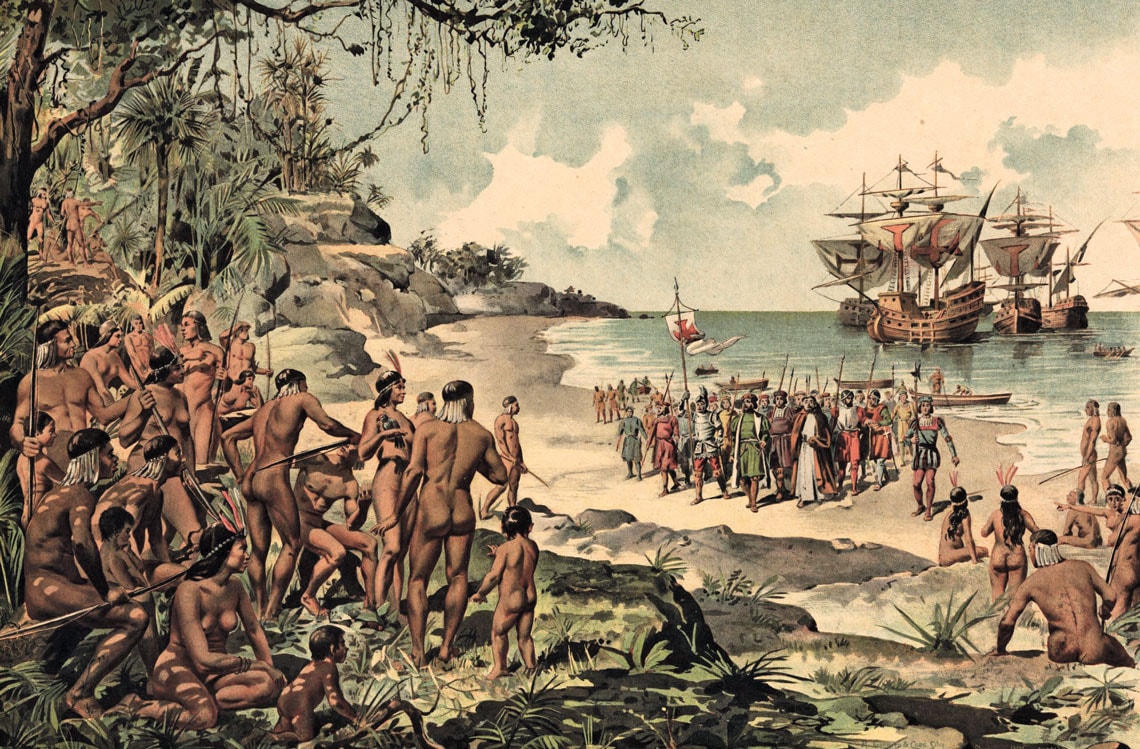 The Portuguese landing in Brazil for the first time, as described by Pedro Álvares Cabral in 1500. Drawing by Alfredo Roque Gameiro (1864–1935)

Assessing how characteristic genetic variations occur over time, Silva and Hünemeier identified three major periods of miscegenation in the Tupiniquim DNA. The first, involving the Europeans, occurred 11 generations ago (around 300 years ago) and coincided with the mining boom at the beginning of the eighteenth century, when the number of European immigrants in Brazil exploded from 300,000 to 3 million people and members of indigenous groups were enslaved en masse. The second happened almost a century later, as the number of African slaves arriving grew sharply after the royal family moved to the country in 1808. The last, stemming from mixing with both Europeans and Africans, began five generations ago—when slavery was abolished at the end of the nineteenth century and new waves of European immigrants arrived to replace slave labor—and continues today.

The native American sections of the Tupiniquim DNA indicate that they never mixed with other living indigenous peoples. “Their genetic profile is different to all of the other groups,” says Hünemeier. For her, this data confirms that the indigenous people who identify as Tupiniquim really do belong to that ethnic group. “Showing that the Tupiniquim have a distinct genetic identity is important for them to identify themselves as a group,” says Mill, from UFES, coauthor of the study.

The Tupiniquim never went extinct, but a sharp population decline led them to mix with descendants of Europeans and Africans

Analysis of the genetic similarity between the Tupiniquim and other living indigenous peoples showed that they are genetically closer to the Urubu-Kaapor, from Maranhão, and the Parakanã, from Pará and Tocantins, who both speak Tupi languages from northern Brazil, than to the Guarani-Mbyá, who also speak a Tupi language, but are from the south of the country, even though the Tupiniquim and the Guarani-Mbyá share common ancestors who lived in the Amazon about 3,000 years ago. This information allowed the researchers to recreate the routes taken by Tupi speakers, originally from southwestern Amazonia, when they started dispersing roughly 2,000 years ago in a process known as the Tupi expansion. These ancestral populations travelled at least 4,000 kilometers and reached the coast by around the year 800, replacing its former residents—indigenous hunter-gatherers who buried their dead in middens (mounds of shells) and were probably part of several groups that speak Gê languages, like the current Xavante people—and giving rise to peoples such as the Tupinambá and the Tupiniquim.

For decades, anthropologists and linguists have been debating the routes taken by Tupi-speaking peoples as they spread across the country. The earliest hypothesis, presented in 1927 by Swiss-Argentine anthropologist Alfred Métraux (1903–1963) and later supported by other groups, suggests ancestors of Tupi-speaking peoples migrated south from the Amazon and settled in what is now Paraguay, Bolivia, Uruguay, and the Brazilian state of Rio Grande do Sul, where the Guarani originated. Later, by following the tributaries of the Paraná River, they reached the coast. Métraux, and later other anthropologists, such as married American couple Betty Meggers (1921–2012) and Clifford Evans (1920–1981), based the hypothesis on archaeological findings, linguistic information, and environmental data from thousands of years ago. There are signs that as the climate of the time caused the rainforest to shrink, the ancestors of Tupi language speakers, who survived by hunting, fishing, and collecting fruit, were forced to migrate in search of food. 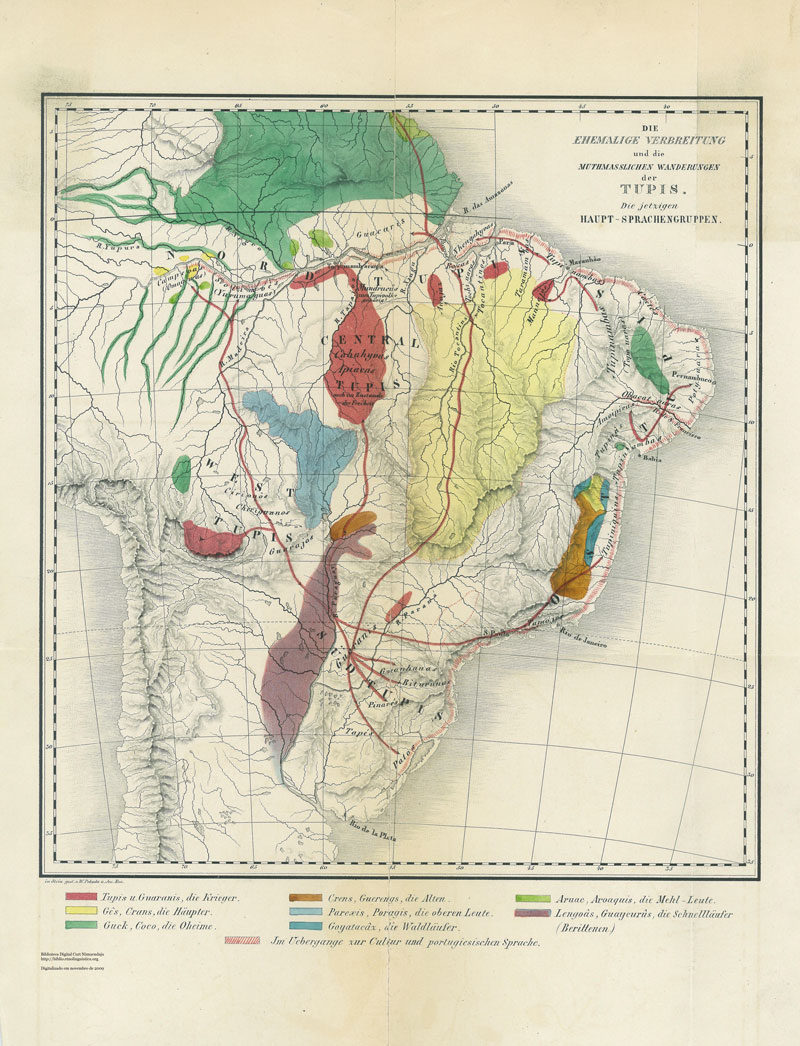 In the mid-1980s, archaeologist José Proenza Brochado, from Rio Grande do Sul, presented a new theory, based on evidence that these groups were already making pottery and implementing an early form of agriculture. By comparing this evidence with the pottery of current peoples, such as the Tupinambá, from the coast, and the Guarani, from the south of Brazil, both of Tupi ancestry, Brochado proposed that the ancestral populations migrated northwest from a more central area of the Amazon, following the Amazon River, and then toward the coast, reaching the present-day state of São Paulo. Later, according to Brochado, they left the coast and headed south. Another wave then left central Amazonia and headed straight to the south, where the Guarani originated. According to this hypothesis, the reason for the migration was not the climate, but the continuously growing population and subsequent need for new land for food production. The Guarani from southern Brazil then moved to the coast, reaching Espírito Santo in the 1960s.

The PNAS study supports this second hypothesis. The genetic data suggests there were two almost simultaneous waves of migration from the same region of the Amazon. “The biological information corroborates Brochado’s hypothesis almost 50 years later,” says Eduardo Góes Neves, an archaeologist from USP who has excavated in the Amazon in an effort to learn more about the Tupi expansion. “Archaeological data we have obtained over the last 10 years indicate a combination of the two explanations: the dispersion began in the southwest of the Amazon, as Métraux first suggested, but the separation of the Tupi ancestors from the coast and those from the south occurred in the Amazon, as proposed by Brochado.”

For Eduardo Tarazona, a geneticist at the Federal University of Minas Gerais (UFMG) who also studies the ancestry of Brazilians, one of the study’s most important contributions is that it shows that the Tupi expansion was not just a cultural phenomenon in which peoples of different ancestries—speakers of Gê languages, for example—adopted Tupi cultural traits. “Based on the data from this study,” says Tarazona, “we can say that it was also a biological phenomenon, probably caused by the increasing population.”