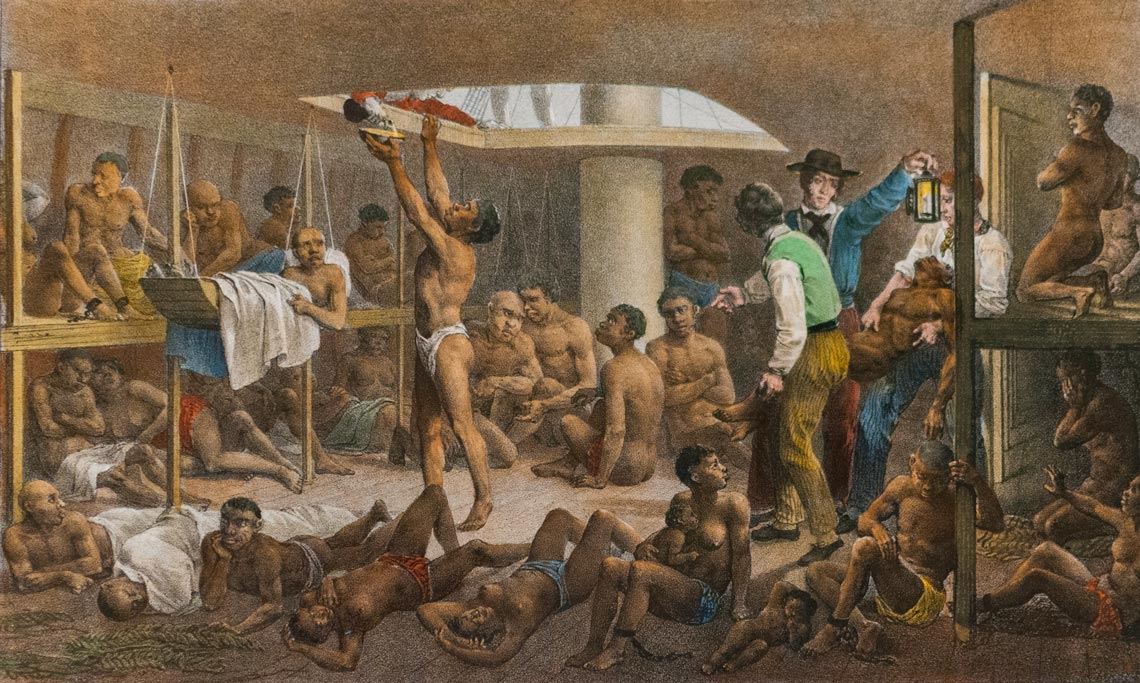 The hold of a slave ship, as depicted by the German painter Johann Moritz Rugendas in his 1820s work Nègres a fond de calle (Negroes at the bottom of the hold)

During the first decades of the nineteenth century, enslaved Africans gained entrance to Rio de Janeiro in stages. After months of travel under degrading conditions in the holds of ships, the captives—who almost always arrived malnourished and sick—made a stopover at customs, where they were identified and assessed for taxes. They were then returned to the ship for a quarantine period, which was initially conducted on islands close to the city and, later, in a quarantine facility in a district far from the city center. Only then were they sent to the Valongo market, where they were exhibited and sold, to supply the provinces of Rio de Janeiro, Minas Gerais and São Paulo with forced labor.

The specifics of their arrival and the routes taken before final disembarkation were recently detailed by a research group headed by archaeologist Andrea de Lessa Pinto, a professor at the Graduate Program in Archeology (PPGArq) of the National Museum at the University of Rio de Janeiro (UFRJ). Their findings were presented in an article published in May 2020 in the journal Latin American Antiquity. The study was conducted as part of a doctoral thesis by historian and archaeologist Reinaldo Bernardes Tavares. He analyzed documents stored in the National Library and the General Archive of the City of Rio de Janeiro in order to reconstruct in detail the routes to entry undertaken by captive Africans arriving in the colonial capital and, later, the United Kingdom of Portugal, Brazil, and the Algarve. “The material we found should help to correct inaccuracies that have crystallized over recent years regarding the arrival of captive Africans,” Lessa says.

A little over a decade ago, the concept began to spread among Brazilian historians that, after crossing the ocean, the enslaved Africans landed directly at the Valongo pier, (in what is currently the Rio de Janeiro neighborhood of Gamboa near Rua Camerino). Valongo was the location of one of the largest complexes for the sale of captive Africans in the Americas. The symbolism of Valongo as the principal location of the slave trade began to solidify in 2011, when archaeological excavations began to identify traces of the pier. 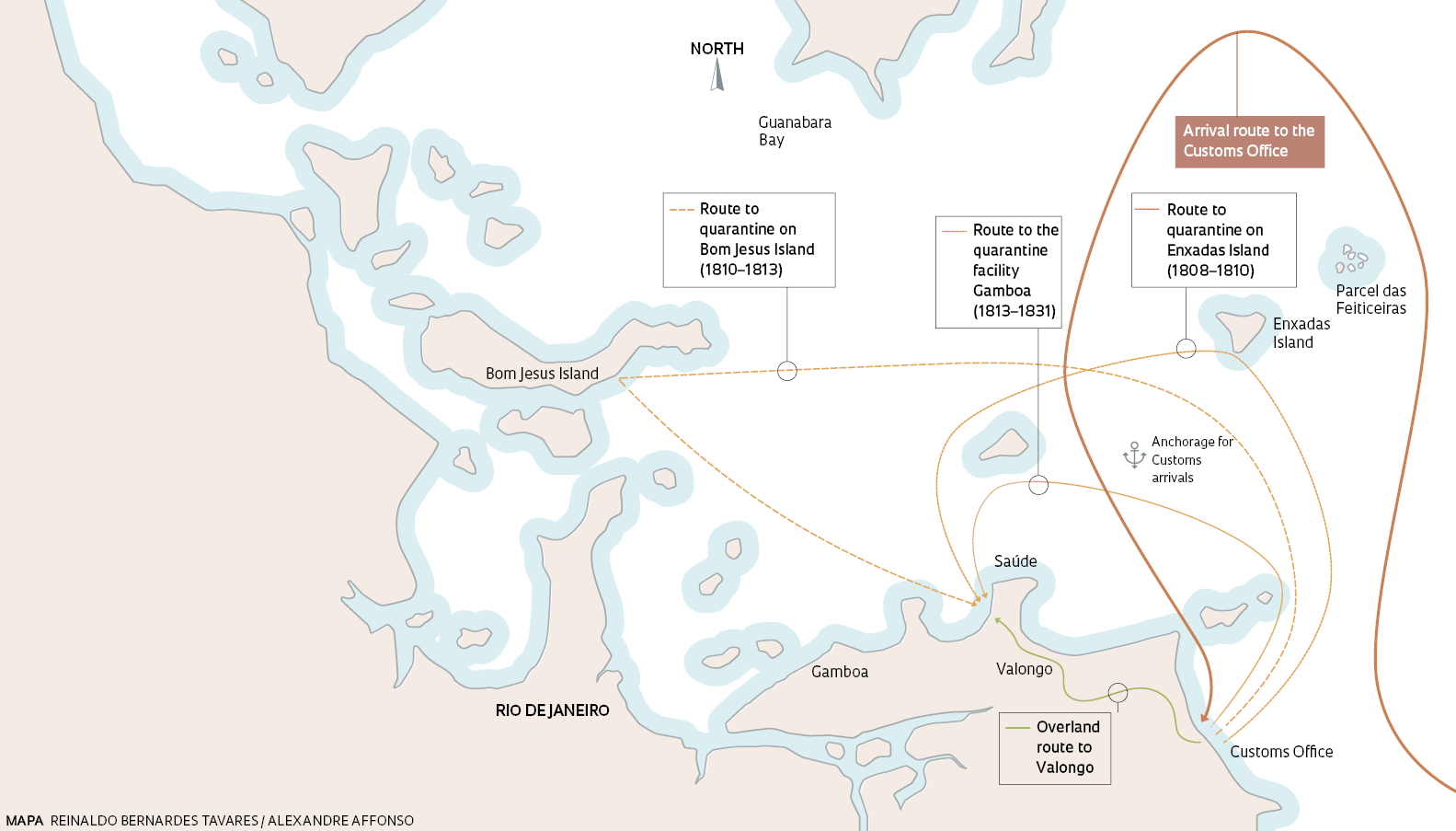 According to the data collected through the current research, the idea that Valongo was also the point of arrival for Africans in Rio began to take shape after the 2005 publication of the book De costa a costa: Escravos, marinheiros e intermediários do tráfico negreiro de Angola ao Rio de Janeiro (1780-1860) (From coast-to-coast: Slaves, sailors, and intermediaries in the slave trade from Angola to Rio de Janeiro [1780-1860]), by historian Jaime Rodrigues, edited by Companhia das Letras. In this work, Rodrigues states—possibly influenced by work from the 1980s—that the Valongo wharf “was the place where legally imported Africans landed in Rio de Janeiro” from 1780 to 1831.

Before the Lessa research group’s work, other historians had already identified the initial landing place for Africans at the Customs House, located in what was then the commercial district of the city. The building no longer exists, but it was in the vicinity of what is now 1º de Março Street, close to the Banco do Brasil Cultural Center. In 2000, in the book A vida dos escravos no Rio de Janeiro [The life of slaves in Rio de Janeiro], also from Companhia das Letras, American historian Mary Karasch stated that before 1824 slave ships freely entered the port to unload in the center of Rio and, after anchoring and “going through official formalities, the ship’s crews were allowed to transfer Africans to smaller boats and ferry them to customs.” However, there were no further details.

During his doctoral work, supervised by Lessa and co-supervised by Claudia Rodrigues Carvalho, also from PPGArq, Reinaldo Tavares found official documents in the National Library and in the General Archive of the City that brought to light details regarding the initial landing at customs and the subsequent transfer to the Valongo district. The oldest registry of passage through customs is a 1752 letter from Dom José I (1714–1777), the king of Portugal, addressed to Antonio Almeida Soares Portugal (1699–1760), the first Marquis of Lavradio and governor and captain-general of the province, ordering him to investigate a complaint from city council officials complaining about the traffic of enslaved Africans going to customs. 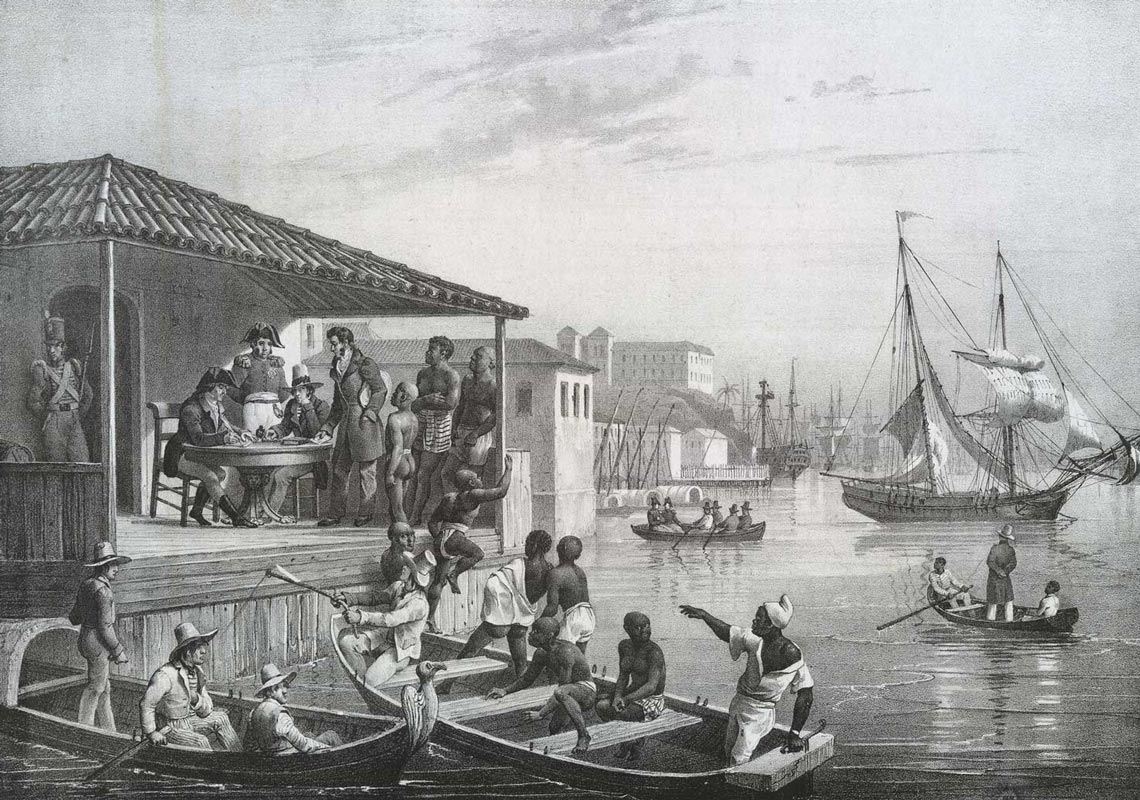 In Débarquement, Rugendas portrays the landing of Africans at the Customs Office in Rio de Janeiro after crossing the AtlanticNational Digital Library Collection

The initial landing at customs is confirmed by a 1762 letter from the Senate to the king, reporting complaints from slave traders over the minimum period of eight days they were required to wait after the captives’ arrival before being able to sell them. The information presented in these documents is backed up by reports from German painter and traveler Johann Moritz Rugendas (1802–1858), who was in Brazil from 1822 to 1825, and portrayed the procedures for arrivals of Africans in Rio in the book Viagem pitoresca através do Brasil (Picturesque voyage across Brazil) and in his painting Débarquement.

Documents from the early nineteenth century helped researchers reconstruct the routes that newly arrived Africans probably followed after passing through customs. In 1774, Dom Luís de Almeida Portugal Soares de Alarcão d’Eça e Melo Silva Mascarenhas (1729–1790), viceroy of Brazil and the second marquis of Lavradio, was able to transfer the slave market from the vicinity of the Customs House to a somewhat more distant district occupied by farms and fishing villages: Valongo, which was about 1.5 kilometers west of the city center. An 1808 letter from Judge Paulo Fernandes Viana (1758–1821), Intendant-General of the Judicial Police, prohibited the foot traffic of enslaved Africans between customs and Valongo. Such transport was required to be done by sea, and ill individuals had to stay on Enxadas Island or on Bom Jesus Island for a quarantine period, before a quarantine facility was built in Valongo itself. “With the slave trade going to Valongo, the region grew and the traffickers moved there, and held captives on the ground floors of their homes,” Lessa notes.

According to the documents found during the research, from that period until the legal ban on importing slaves in 1831, when between 500,000 and 700,000 enslaved Africans arrived in Rio, the final disembarkation of the captives—technically called unloading—took place on the beaches close to Morro da Saúde, one kilometer west of the location where they were later sold in the warehouses of Valongo. After the construction of the quarantine facility in 1811, the captives were mostly unloaded behind the Morro da Saúde. “The analysis and interpretation of primary written sources, mostly unpublished, allowed us to discuss the entry, disembarkation, and unloading of captive Africans in Rio de Janeiro from a new historical perspective,” write the researchers in their article in Latin American Antiquity. As a result, they claim, the theory that assigns a primary role to the Valongo pier in this process, which until then was designated as a mandatory “disembarkation” spot for the slave cargo, is not supported in the analyzed documents. “Valongo wasn’t the arrival location, but the point where the captives were distributed to other wharves in Guanabara Bay, before they were taken inland,” explains Lessa. 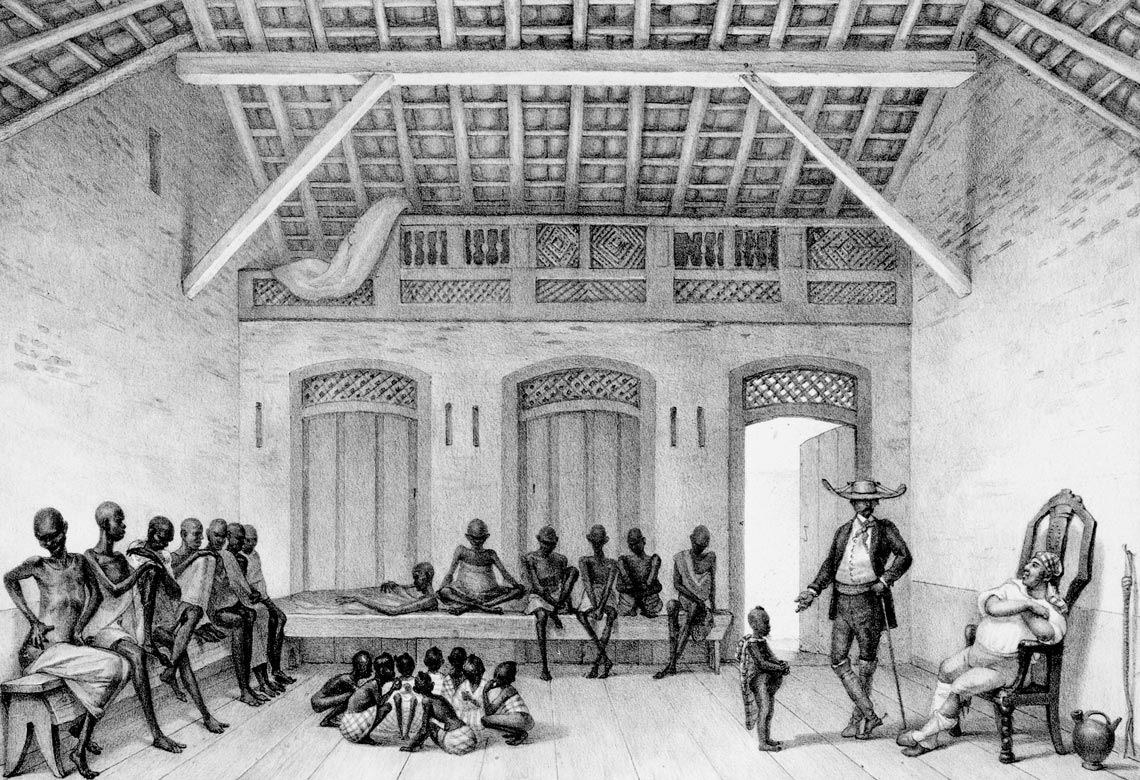 “This work is a beautiful effort at documenting the practices of the period and allows us to better understand how the logistics of arrivals worked and how slavery shaped the urban space in Rio,” comments historian Rafael Marquese, from the University of São Paulo (USP), a scholar of black slavery in the Americas.

Andrea Lessa emphasizes that the conclusions of Tavares’ thesis do not diminish the historical and symbolic importance of the Valongo pier for people of African descent. “That locale was the epicenter of the slave trade in the Americas for an extended period,” notes the archaeologist, who conducted excavations in 2017 and 2018 that identified the abject burial conditions for the bodies of Africans who died shortly after arriving: stacked in piles and barely covered by dirt, they were burned to reduce the stench and optimize space.

Scientific article
TAVARES, R. B. et al. From the Customs Office to Valongo: The entry of African captives in Rio de Janeiro in the nineteenth century under a new historiographical perspective. Latin American Antiquity. Vol. 31, no. 2, pp. 342–59. 2020.