The financial autonomy gained in 1989 forced state universities in São Paulo to find their own solutions for managing funding resources, but ensured that they had the freedom to propose innovative approaches. The first years of autonomy were tumultuous. The country’s economic situation, with its inflationary surges and sudden fluctuations in growth rates led to instability in the universities’ portion of revenues collected through the sales and services tax (ICMS). This percentage had been determined by a statute signed by governor Orestes Quércia in February 1989.

Engineer Roberto Leal Lobo, dean of the University of São Paulo (USP) from 1990 to 1993, recalls difficulties paying salaries on time. “On several occasions, the Treasury failed to make the agreed funds transfers and would pay out only what was necessary to avoid further delaying salaries, and then settle the difference later,” recalls Lobo. At various other times USP had to resort to bridge loans at the state banks Caixa Econômica Estadual or Banco do Estado de São Paulo (Banespa) to honor its payroll. The financial institutions advanced the money with the expectation that the federal funds transfer would soon follow. Joaquim J. de Camargo Engler, a professor at the Luiz de Queiroz College of Agriculture (ESALQ) and the USP coordinator of general administration under Lobo’s management, says that he was personally responsible for repaying the loans to the Caixa Econômica Estadual bank.

Read more:
– A legacy for the future
– The race for excellence
– Fuel for innovation
– Expanding student numbers

USP got some relief when then-governor Luiz Antonio Fleury Filho agreed to sign onto a US$165-million installment loan granted to the university in the late ‘80s by the Inter-American Development Bank (IDB), which was used for research programs, equipment purchases, and building construction.

At this time, innovative ideas also emerged to streamline expenditures. Chief among them, Dean Lobo recalls, was the creation of a “currency” within USP, based on the portion of the ICMS tax revenues that had been allocated to each university over previous years. “Since inflation was high, we didn’t talk in terms of money. Instead, each director worked with his portion of the ICMS. We created a system whereby, if funds weren’t spent during one month, the director maintained a credit tied to his portion and could request the money in inflation-adjusted amounts when needed.” This measure, in Lobo’s view, had a noticeable effect on planning. “There was a habit of spending money quickly before it lost value or out of fear of funding being cut. With this ‘currency,’ the directors could save up, in order to invest in the equipment they needed, with guarantees that funds were being reserved. And it helped each dean’s office administrate its accounts, by investing the money left over and receiving better rates than inflation.”

The outlook improved when the universities’ percentage of ICMS revenues—initially set at 8.4%—was raised to 9% in 1992, and 9.57% in 1995. Universities have also devised strategies for dealing with fluctuations in tax revenues. In the mid-1990s, the University of Campinas (UNICAMP) developed a system for funds management, reevaluating its budget every three months and creating cost containment measures in case there were reductions in tax revenue transfers. 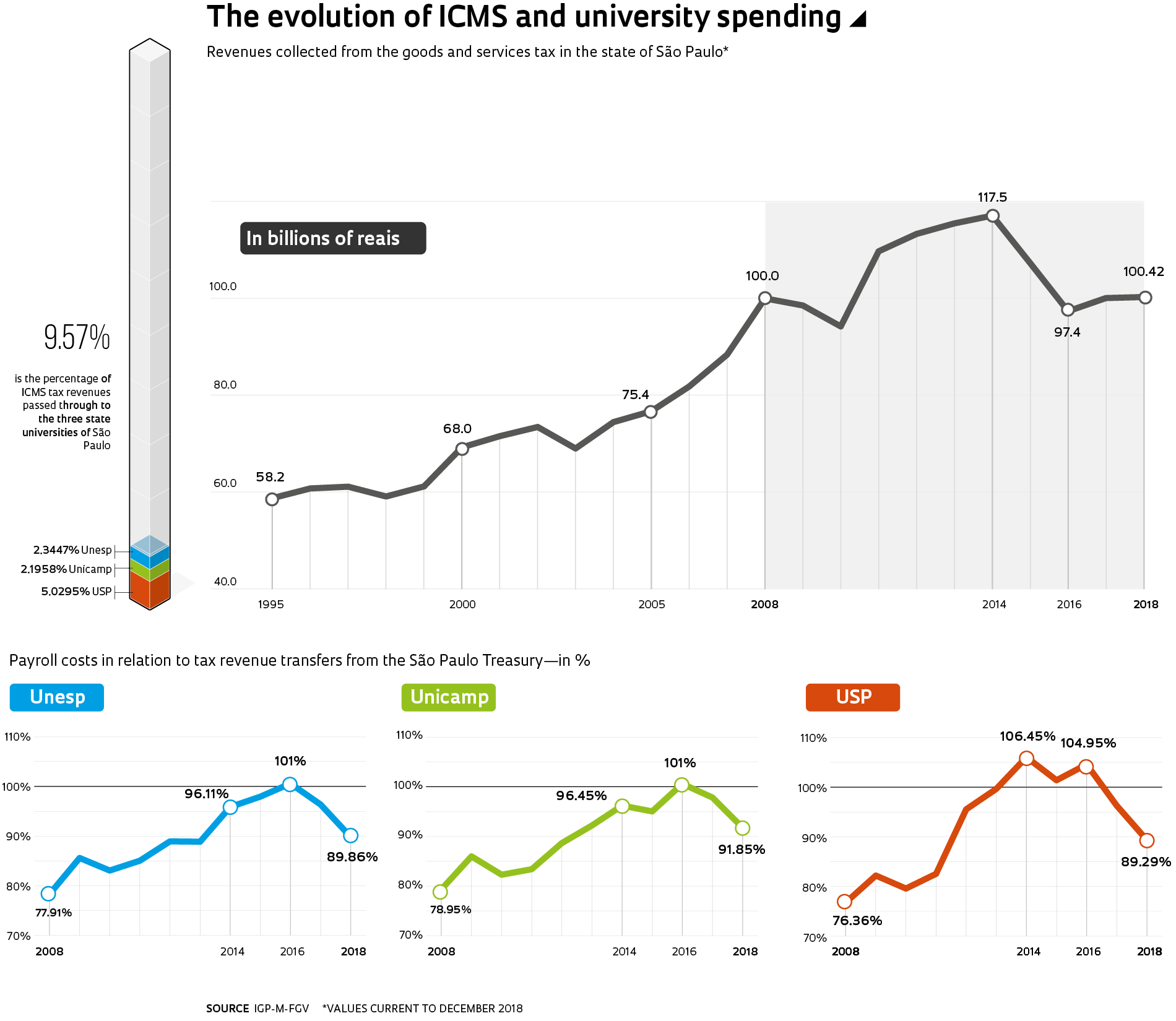 The ICMS tax revenue transfers are the main source of funding for São Paulo universities, but not the only source. They also incorporate resources from research-funding agencies, agreements with companies, public institutions, and service providers, among others. UNICAMP, for example, received tax revenue transfers of R$2.268 billion from the State Treasury in 2018, but also raised R$728 million in funding from other sources and applied R$75 million of its own revenues. On the list of extra funding sources, R$220 million came from the Unified Health System (SUS), to pay for healthcare for people in the Campinas region at the university’s Hospital de Clínicas. Projects and grants funded by federal and state agencies resulted in the release of R$333.4 million in funding in 2018.

Between 1995 and 2002, ICMS revenue amounted to between 60 and 70 billion, in inflation-adjusted values. But after 2003, accompanying growth in the economy, the amount of funding increased consistently for ten consecutive years—in 2014, revenues hit R$117.5 billion. The increase allowed universities to expand their activities. USP created a campus in the eastern zone of the city of São Paulo in 2005 and merged the Lorena School of Engineering into the university the following year. In 2008, UNICAMP opened a campus in Limeira, while São Paulo State University (UNESP) expanded its presence to 24 cities, creating experimental campuses in municipalities such as Registro, Itapeva, São Joao da Boa Vista, Ourinhos and Rosana.

The availability of funds has also allowed reserves to be set aside to balance accounts during times when tax revenues are down. With the robust growth in revenues and careful spending policies, the universities’ payroll commitments as a percentage of overall budgets were soon some of the lowest in their history. In 2008, they reached an average of 77.3% for the three institutions, the lowest level since 1989, when the average was 73.3%. USP, during the time it was headed by Dean Suely Vilela, managed to reduce its payroll from 84% of its tax revenue allotment in 2007 to 76% the following year.

At that time, there was the perception that this virtuous circle would have a long lifespan, which increased pressure to invest the funds that had been saved. In 2013, the governor of São Paulo, Geraldo Alckmin, suggested that the universities use their reserves, which totaled R$6 billion at the time, to generate more results.

Policies to increase spending were adopted, which were not limited to investments, but also included permanent expenses. A doctoral dissertation defended in 2016 by Alexandre Hideo Sassaki of the USP School of Economics, Business, and Accounting, addressed the policies employed by USP from 2010 to 2013, during the administration of Dean João Grandino Rodas. Sassaki concluded that the financial deterioration observed during this period, which led the university to commit its entire Treasury revenue funds to payroll, was driven by the creation of new career paths for employees and expanding the number of those eligible for food aid and meal vouchers, among other benefits. “The imbalance was caused by the compound implementation of spending increases over a short time, without proper evaluation of the combined impact of such decisions and without proper studies of their medium- and long-term financial effects,” Sassaki noted in his thesis. 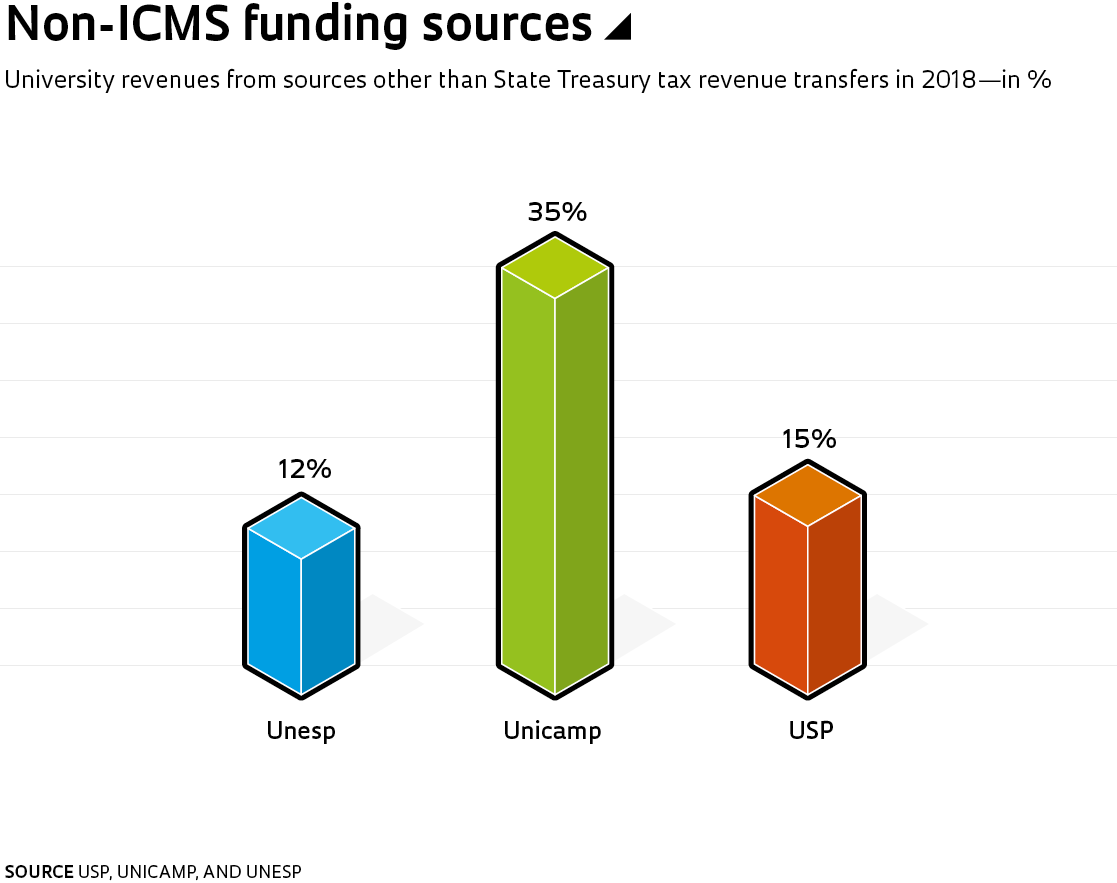 USP’s conduct was mirrored by other state universities. “They faced corporate pressures to increase spending during discussions at CRUESP (Council of Deans of State Universities in São Paulo) and eventually gave in to them,” says physicist José Roberto Drugowich, USP professor and coauthor, with Paulo Muzy, of the book Os desafios da autonomia universitária (The challenges of university autonomy; Paco Editoria, 2018).

The economic downturn and a sharp drop in revenue in 2015 produced the biggest financial crisis in 30 years of financial autonomy, forcing universities to spend their reserves. USP promoted two voluntary layoff plans to reduce labor expenditures, while UNICAMP and UNESP froze investments and adopted cost containment policies. UNESP faced cash-flow difficulties, and there were delays in paying mandatory year-end salary bonuses for teachers and staff in 2017 and 2018. One area of vulnerability for both UNICAMP and UNESP is the growth in spending on inactive, i.e., retired or otherwise pensioned, public servants. At the time autonomy was achieved in 1989, the two universities had been established for less than 25 years, and the spending commitment for pensioned workers was less than 5% of payroll—today that number exceeds 30% at both institutions, and continues to grow. “In 2018, we spent about R$700 million to cover the shortfall in pension payouts and this is getting extremely cumbersome for the university to sustain within its budget,” stated UNESP dean Sandro Valentini.

The current dean of UNICAMP, Marcelo Knobel, says that autonomy was crucial for universities to find ways out of governance problems. “There were decisions that put university finances at risk and the result was a complex crisis that we had to solve,” he said. “Even during crises, autonomy has shown that it is possible to overcome difficult times through internal discussions, planning, and transparency about what happens here.” In the case of USP, a resolution approved by the University Council, under the administration of Dean Marco Antonio Zago, laid the groundwork for ending uncontrolled spending. When staffing costs exceed 80% of ICMS revenue funds, the university will suspend real salary increases, job creation, and overtime authorizations, and when costs go over 85%, the imbalance will have to be reversed during the next two semesters.

For Roberto Leal Lobo, the positive results of the autonomy of São Paulo’s state universities far outweigh the setbacks faced: “We’ve produced a much larger number of theses and articles while reducing the number of teachers and other staff. What led to this boost in quality was autonomy.” In Lobo’s view, one misplaced aspect of autonomy involves the relationship between universities and the government. “When I was dean, I suggested to Governor Fleury that we create a goal plan showing what results society expected from universities in times of autonomy. I even sent him a draft of ideas, but there was no interest in pursuing it further,” he adds. “It’s a mistake to imagine that universities are capable of responding to all of society’s aspirations without having a goal.”

Financial autonomy allowed the state universities of São Paulo to adopt human resources policies different from those in operation in other civil service areas. One example of this took place in the early 1990s, when USP’s University Council approved the hiring of foreign professors, even though the Constitution only allowed native or naturalized Brazilians to hold public positions. The case was taken to the Federal Supreme Court and the judges’ conclusion was that autonomy permitted such hires. “Today, any foreign teacher can apply to teach at public universities, and not just at USP,” says physicist José Roberto Drugowich.

But there are bureaucratic strings that even autonomy can’t unravel. Though universities were able to create their own career paths, they had to respect a salary cap for educators, which couldn’t exceed the R$22,300 salary of the state governor. As the chief executive’s salary has been raised less than inflation over the past 10 years, earnings at the top of professorial careers have plateaued. Another problem is that the salaries at state universities have become less competitive than those at federal universities, where salary limits are tied to the earnings of Supreme Court judges, currently at R$39,200 per month.

For Elizabeth Balbachevsky, a professor at the Department of Political Science at USP’s School of Philosophy, Languages and Literature, and Human Sciences and a specialist in the academic profession, the mismatch in salary caps has no impact on attracting talent to São Paulo universities. “Those who want to pursue careers at USP, UNICAMP, and UNESP aren’t generally concerned only with the salary issue. They are educators interested in doing research, and São Paulo offers them much more robust conditions than in other states, thanks to the presence of FAPESP,” she explains.

Balbachevsky does see other deleterious effects, however. Because of advancement through competitive exams, more experienced teachers sometimes hit the salary ceiling before reaching the top of their careers. As a result, they’re less interested in taking on managerial positions for which they cannot be paid more. “This is not good for the university,” she says. “Often the department head is occupied by a young faculty member, who doesn’t have the leadership experience indispensable to provide impetus to academic life. This creates a mismatch between the institutional line of authority and the academic leadership.”