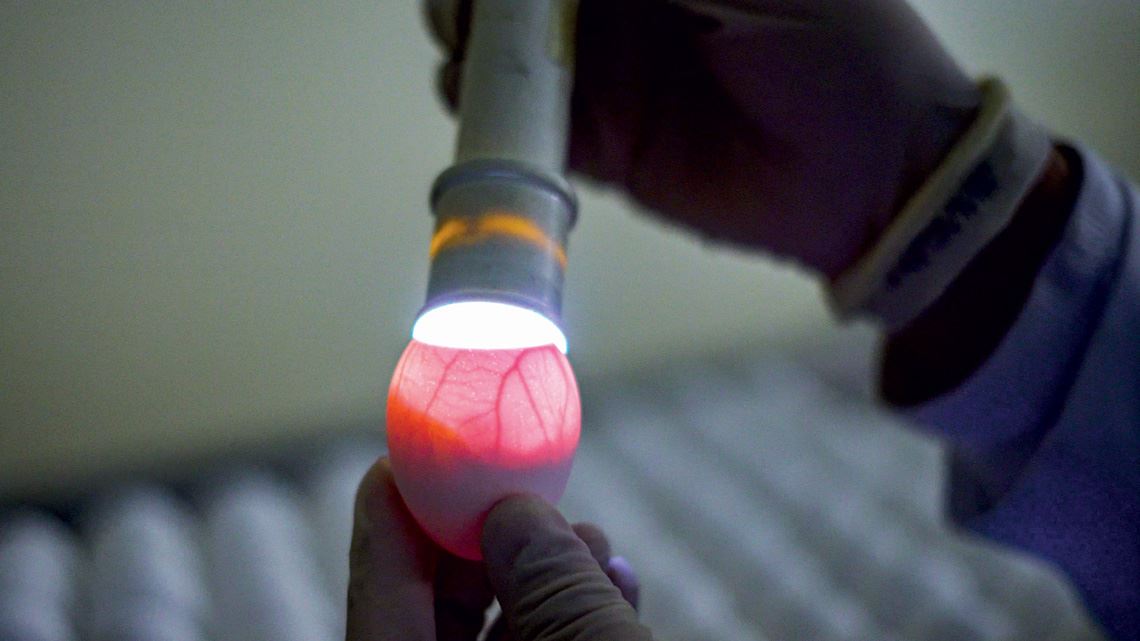 Eggs used to manufacture the flu vaccine at the Butantan Institute, which can also be used to produce ButanVac

A second generation, modified version of SARS-CoV-2’s spike protein is part of a new low-cost COVID-19 vaccine candidate that has recently begun clinical trials on humans in the USA, Vietnam, and Thailand. Known as NDV-HXP-S, the vaccine was conceived by an international partnership, designed to be produced in developing countries, in facilities currently used to manufacture the flu vaccine in embryonated eggs, and stored in the same conventional refrigeration systems used to maintain most vaccines for other diseases.

The novel coronavirus’s spike protein allows it to bind to receptors on the surface of human cells and triggers the infection by SARS-CoV-2. It therefore tends to be used as the antigen—the element recognized as external by the immune system and targeted by antibodies created to fight the pathogen—in most COVID-19 vaccines. The new modified version of the spike protein, called HexaPro, is an improved form of its three-dimensional structure. According to its creators, it is more stable and easier to maintain than its previous version, known as 2P.

In Brazil, the only vaccine under development using HexaPro is called ButanVac, which will be produced by the Butantan Institute in São Paulo. At the end of April, Butantan began manufacturing a batch of 1 million doses. By June 15, the institute hopes to have produced 18 million doses of ButanVac, which is awaiting ANVISA authorization to start clinical trials. The vaccine contains a modified variant of the Newcastle disease avian virus, which is practically harmless to humans, and was created by a team of researchers led by Peter Palese, from the Icahn School of Medicine at Mount Sinai in New York City, using HexaPro (see Pesquisa FAPESP issue no. 302).

With the exception of vaccines that use the entire coronavirus (inactivated or attenuated) as the antigen in their formulations, such as CoronaVac, which is also produced by the Butantan Institute and used in Brazil, all other vaccines use the spike protein to stimulate the immune system. The three vaccines approved in the USA—made by Pfizer/BioNTech, Moderna, and Janssen—use 2P as the antigen, as does the vaccine developed by American company Novavax. Both 2P and HexaPro arose from the same origins. 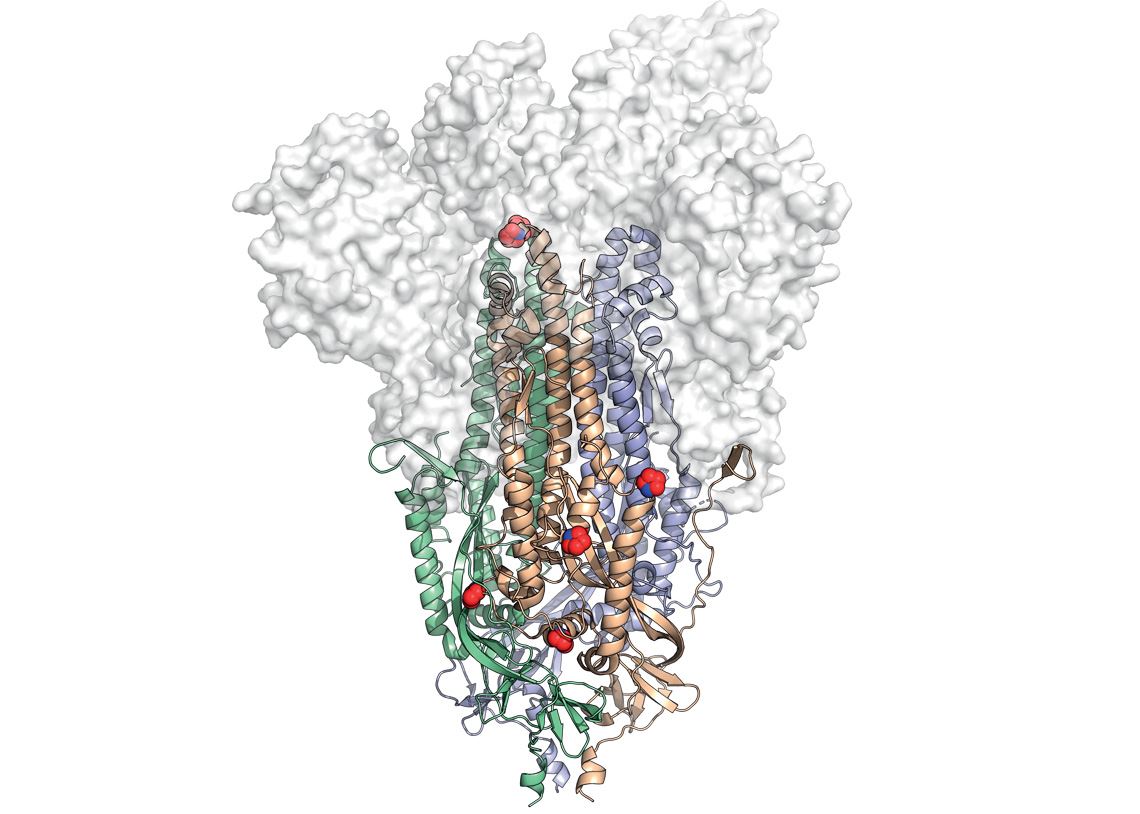 University of Texas at Austin

The spike protein structure, highlighting the location of the modifications (red and blue spheres) that make it more stableUniversity of Texas at Austin

In February of last year, before the COVID-19 pandemic even reached the West, American structural biologist Jason McLellan of the University of Texas at Austin published an article in the journal Science describing the first stable three-dimensional representation of the SARS-CoV-2 spike protein, which would later be called 2P. “This protein is very unstable before the virus enters human cells,” explains McLellan in an interview with Pesquisa FAPESP. “We have to make it more stable through molecular modifications so that we can use it as an antigen in vaccines.”

The 2P version features two such modifications (hence its name). It has two additional prolines, a type of amino acid that makes the usually eratic 3D structure more rigid than it is before it enters a host’s cells. Proteins can be made up of 20 different amino acids. More rigid connective tissues, such as collagen, are high in prolines. Biologists often compare the use of prolines for protein stabilization to the use of molecular staples to maintain a compound’s shape. In the case of HexaPro, whose 3D structure was published in July 2020 in another article in Science, six prolines were introduced. With half a dozen molecular staples, this version of the spike protein is more stable, helping to generate a better immune response, as well as allowing vaccines that use it as an antigen to be kept at temperatures between 2 and 8 degrees Celsius (ºC). “We were able to quickly produce stabilized versions of the SARS-CoV-2 because even before the pandemic, my colleagues and I were already working on 3D structures of this protein in other coronaviruses, such as MERS [Middle East Respiratory Syndrome] and HKU1,” explains McLellan.

The union between the work of McLellan’s team and the efforts of Peter Palese’s colleagues at Mount Sinai to produce a modified, easily culturable version of the Newcastle virus led to the development of the vaccine candidate NDV-HXP-S. The partnership was set up by PATH, a non-governmental organization based in Seattle, USA, whose aim is to stimulate the use of innovative health solutions in developing countries. Due to the severity of the pandemic, the Austin and New York groups, which both have patents for their vaccines, have agreed to license their products royalty-free to a group of low- and middle-income countries, including Brazil.

According to PATH’s press office, the various versions of NDV-HXP-S being manufactured for testing in different countries are comparable. They use the same base materials (virus seed bank), which have been propagated, purified, and inactivated by similar methods and formulated into vaccines with the same potency assay. “Data from clinical trials of any of these three vaccines [referring to formulations being tested in Thailand, Vietnam, and Brazil] should therefore indicate the results expected for the other two,” the press office said in an email to Pesquisa FAPESP.

“Highs and lows are a part of vaccine development,” says biologist Ricardo Oliveira, production director at the Butantan Foundation. But according to Oliveira, “it shouldn’t be too difficult to scale up production” of ButanVac if the clinical trials are successful. Butantan is very familiar with the technology used to produce the vaccine, since it uses the same method to manufacture the annual flu vaccine for the Brazilian public health system.

On the opposite page, eggs used to manufacture the flu vaccine at the Butantan Institute, which can also be used to produce ButanVac. Left, the spike protein structure, highlighting the location of the modifications (red and blue spheres) that make it more stable