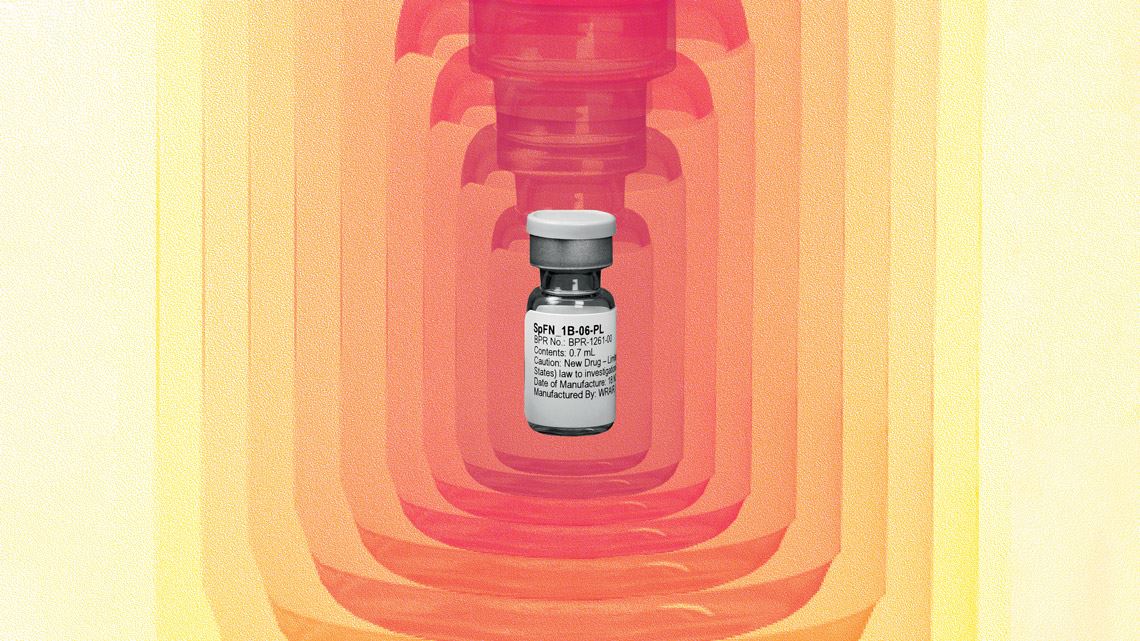 Illustration based on a photo of the vaccine candidate SpFN developed by the Walter Reed Research Institute, USA

As the Omicron variant of the SARS-CoV-2 virus rapidly spread around the world earlier this year and pharmaceutical giants Pfizer and Moderna announced that they were testing a specific vaccine for the new strain, other research institutions and biotechnology companies were heading in a different direction. They were focusing on the development of vaccines that offer protection against multiple coronaviruses—not just the variant of the moment in the COVID-19 pandemic. At least two broad-spectrum vaccines have begun human trials and several others are a few steps away from starting phase 1 clinical trials after achieving satisfactory results in preclinical trials on animals. The purpose of phase 1 trials is to analyze a vaccine’s safety and obtain preliminary indications of its ability to stimulate the immune system.

The most advanced to date is the SpFN vaccine, developed at the US Department of Defense’s Walter Reed Army Institute of Research (WRAIR), where scientists have completed the first phase of human trials but have not yet released any results. Before reaching the market, any vaccines must also go through phase 2 and 3 clinical trials, in which they are tested on a much larger number of people to obtain more data on their safety, efficacy, and side-effects.

“Our researchers are analyzing the information and writing a report with the results [from phase 1 human trials]. They were excited about the preclinical data and the latest results will be shared when they are published in a peer-reviewed study,” Lee Osberry Jr. from Walter Reed’s communications department told Pesquisa FAPESP. The SpFN vaccine is based on a platform that uses ferritin nanoparticles. It generated a strong immune response in nonhuman primates, not only against the original strain of SARS-CoV-2 and other variants of concern, but also against the SARS-CoV-1 virus, which emerged in 2002. A variant of concern is the name for the strains that pose the greatest potential risk to public health.

This and other broad-spectrum vaccines are designed to target the strains classified within the sarbecovirus subgenus, which encompasses SARS-CoV-1, SARS-CoV-2, and their variants. “The next generation of vaccines we develop will also cover merbecoviruses [like MERS] and embecoviruses [the common cold]—with these three subgenera together, a vaccine would protect against all betacoronaviruses,” Kayvon Modjarrad, head of the emerging infectious diseases branch at WRAIR and coordinator of the trial, told Pesquisa FAPESP. Betacoronaviruses are one of the four genera of coronaviruses.

Another institution that has announced the start of phase 1 clinical trials is the Southampton Clinical Trials Unit, part of the UK’s National Institute for Health Research (NIHR). The researchers are testing a DNA vaccine technology developed by the University of Cambridge and biotech spin-out DIOSynVax. According to Jonathan Heeney, the researcher who founded DIOSynVax, this is the first step towards a universal vaccine being developed at the institution, “which should protect us not only from SARS-CoV-2 variants, but also from future coronaviruses.”

On the University of Cambridge website, the group describes how it searched for types of antigens (molecules from key regions of the virus capable of triggering the production of antibodies) that are the same in many of the coronaviruses found in nature—including in bats—to stimulate the generation of neutralizing antibodies that block viral infection and T cells, which can remove cells already infected by known betacoronaviruses. “These are structures that are vitally important to the virus life cycle, which means we can be confident that they are unlikely to change in the future.”

The DIOSynVax vaccine is also different in that it is applied intradermally without a needle, using a jet of air released with enough pressure to inject the compound into the body, a technology developed by US-based company Pharmajet.

Concern about possible mutations of the virus increased with the emergence of Omicron at the end of 2021, which has about 50 genetic alterations to the virus originally identified in Wuhan, more than 30 of which are on the spike protein. These mutations allow the virus to infect some people who have already had COVID-19 or three doses of a vaccine. While Pfizer expects results from the clinical trials of its Omicron-specific vaccine in the first half of 2022, there is no guarantee that this will still be the dominant variant by that point in time. The benefit of a universal or at least pan-variant vaccine (for different strains of the same virus) would be that scientists would not have to develop new vaccines for every new variant that appears.

Boosters
With this in mind, US biotechnology company Gritstone Bio, based in California, began phase 1 clinical trials in Manchester, UK, in September last year for a booster vaccine that uses a method known as self-amplifying RNA (saRNA), a newer version of messenger RNA technology. The vaccine seeks to stimulate cellular immunity through parts of the SARS-CoV-2 virus that change less frequently. Cellular immunity is provided by T cells.

“As we have seen with the Omicron variant, viral surface proteins such as Spike are mutating at a high rate, leaving the immunity provided by spike-dedicated vaccines vulnerable to variants containing numerous spike mutations,” said Andrew Allen, Gritstone cofounder, president, and CEO, in a company statement. “This innovation enables inclusion of a wide array of highly conserved viral epitopes, potentially creating an immune state that may offer more robust clinical protection against current and future SARS-CoV-2 variants.” The epitope is the region of the antigen to which the antibody binds.

Barton Ford Haynes, an immunologist from Duke University’s School of Medicine in North Carolina, USA, says his group had received US$4 million from the National Institutes of Health (NIH) by mid-January this year to develop several versions of a vaccine that provides immunity to any variant that may arise from SARS-CoV-2 and other sarbecoviruses. Clinical trials are scheduled to begin in September. The vaccine uses a ferritin-nanoparticle platform with proteins that express 24 molecules from the receptor binding domain (RBD) of the spike protein, the region of the virus that binds to human cells.

Pamela Bjorkman, a bioengineer from the California Institute of Technology (Caltech), also hopes to start clinical trials later this year for a mosaic vaccine that uses parts of several viruses and has shown promising results in animals. “We are currently trying to organize the logistics to set up human clinical trials through the University of Oxford in the UK,” she wrote by email, adding that she was negotiating with a funding agency to secure investment for the trials.

Progress has also been made with intranasal vaccines. In January, researchers at Yale University and the Howard Hughes Medical Institute in the USA released data from preclinical trials involving mice, indicating that their nasal spray vaccine provoked a strong immune response against SARS-CoV-2 and other sarbecoviruses in the mucous membranes of the respiratory tract.

Representations of the SARS-CoV-2 variants: a universal vaccine should be effective against all of themAndriy Onufriyenko / Getty Images

At least 10 vaccines for the novel coronavirus are being administered on a major scale around the world, according to the World Health Organization (WHO). Another 132 are undergoing human trials, and 195 are in the preclinical development phase. In Brazil, five vaccines are in the initial phase of testing and one is in the intermediate phase (see Pesquisa FAPESP issue nº 310).

About five laboratories and research centers in the country are developing coronavirus vaccines with a more universal approach, according to Flávio Guimarães da Fonseca, a virologist from the Institute of Biological Sciences at the Federal University of Minas Gerais (UFMG) and president of the Brazilian Society of Virology. The primary scope for all of them is the novel coronavirus and its variants. “The concern is that variants might emerge that can completely escape the vaccines. New variants are now considered the biggest challenge to our long-term control of COVID-19, the end of the pandemic, and the way this virus will integrate into our lives,” says Fonseca. “The UFMG vaccine, for example, will focus on generating a cellular response against SARS-CoV-2. It is a universal vaccine for all variants of the virus.”

The strategy used by the group was to develop a chimera—an artificial protein that does not exist in nature—whose main antigen is the nucleocapsid protein, also called the N protein. Unlike the spike protein, it is not located on the virus’s surface, which is the region that most often mutates. “The N protein is much less likely to mutate from one variant to another, so it has this more universal nature.”

Although UFMG’s preclinical studies were only conducted for SARS-CoV-2 and its variants, Fonseca believes their vaccine could theoretically trigger a response against other viruses in the SARS-CoV-2 family, such as SARS-CoV-1 and MERS, the N proteins of which are very similar. The UFMG team is currently in discussions with the Brazillian Health Regulatory Agency (ANVISA) with a view to starting clinical trials of the vaccine.

In São Paulo, the Butantan Institute’s Center for Development and Innovation (CDI) announced that it has conducted in vitro and in vivo proof-of-concept studies for a multi-antigenic vaccine and will soon publish the results of its pipeline and vaccine candidates tested.

According to CDI director Ana Marisa Chudzinski-Tavassi, researchers at the center have been carrying out computational analyses of potential SARS-CoV-2 mutations since the beginning of the pandemic, including where on the viral proteins they occur, which have the least mutagenic potential, and how immunogenic they may be (to what extent they provoke a reaction from the immune system). The CDI has also developed a recombinant protein platform capable of containing information from a single protein or parts of several different proteins. There is currently no forecast of when the center will start human clinical trials of its multi-antigenic vaccine.