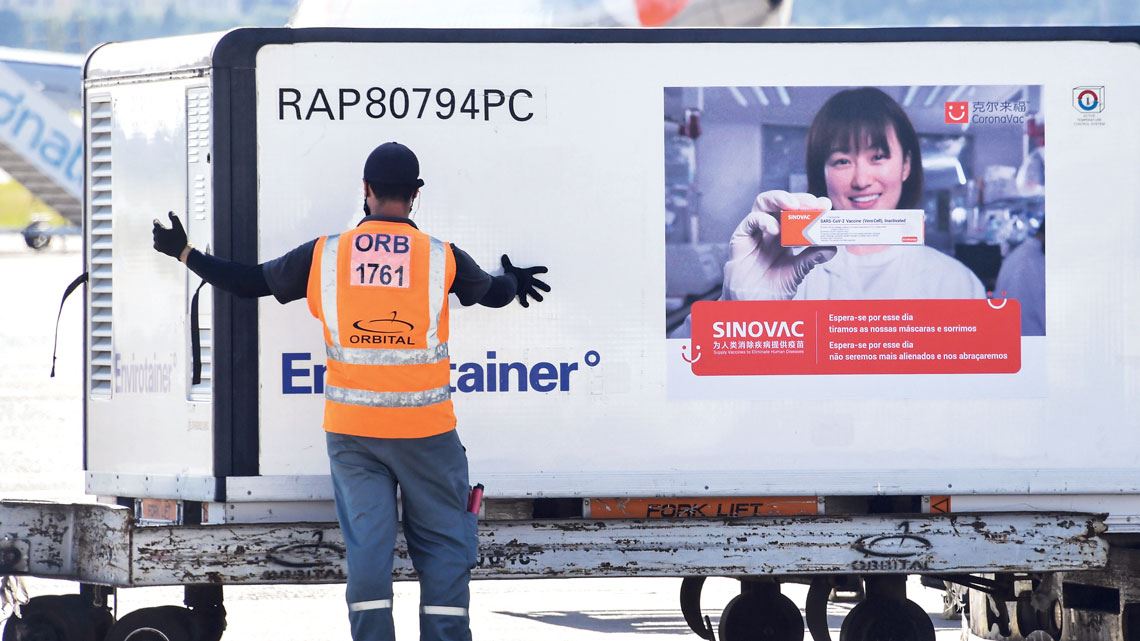 In a press conference held on December 14, Dimas Covas, director of the Butantan Institute, announced the start of primary analysis of data from phase 3 clinical trials assessing the effectiveness of the CoronaVac vaccine candidate, produced by Chinese biotechnology company Sinovac. The number of trial participants infected with the virus had reached 151, more than the minimum statistically required to assess the vaccine’s ability to generate antibodies against COVID-19.

The reason given for starting the analysis before the phase 3 trials were complete was to accelerate the request for emergency and full approval of the vaccine by the Brazillian Health Regulatory Agency (ANVISA), a step which needs to be completed before large-scale application can begin. At the same time, Sinovac submitted the data to China’s regulatory body for the same purpose. “We trust the quality of the data and the dialogue with ANVISA, we believe the vaccine will be approved, but if necessary, we will use approval in China to request recognition in Brazil,” said Covas in another press conference held on the 21st.

On December 23, at a press conference watched by 4,400 people on YouTube, he delayed the presentation of CoronaVac’s effectiveness data for a second time. The results of the phase 3 clinical trials, which involved 12,400 participants, were initially expected in October, before being put off until mid-December. He declared: “We have reached the effectiveness threshold that allows us to apply for approval.” According to him, Sinovac asked to postpone disclosure of the results for a further 15 days so that it could examine the data and unify the results of trials carried out in several different countries. CoronaVac is one of three experimental vaccines that the Chinese government adopted for emergency use and is being given to around one million people in the country. In addition to Brazil, it is also being tested in Indonesia and Turkey.

The phase 3 trial results are eagerly awaited, given how much easier it would be to distribute CoronaVac than the Pfizer and Moderna vaccines, which need to be kept at -70 degrees Celsius (ºC) and -20 ºC respectively. Sinovac’s vaccine would therefore be a more viable option for low-income countries, since it does not require a network of special freezers (see article).

On December 8, Sinovac announced that it would need more time to determine CoronaVac’s effectiveness, refuting the results announced by its partner in Indonesia, the state-owned company Bio Farma, which claimed the vaccine had shown 97% seroconversion (capacity to generate antibodies) in its ongoing phase 3 clinical trials, according to the journal Fortune. The information is not valid because Bio Farma obtained the results based on a small group of just 1,600 participants (Pfizer achieved 94% effectiveness based on data from 43,000 participants and Moderna achieved 95% with 30,000). A spokesman for the Indonesian company said the full results of the third phase of testing in the country are due to be announced in January 2021.

Despite the uncertainties, in early December the state of São Paulo announced plans to start vaccination with CoronaVac on January 25, subject to ANVISA approval. The first stage of the immunization campaign would cover 9 million people, starting with health workers, indigenous people, quilombolas, and people aged 78 or older, before moving on to anyone aged 60 or older. The members of this first group should, according to the state government, should receive both doses of the vaccine by the end of March.

One of the objectives of São Paulo’s plan, even with publication of the data postponed, is to avoid overlapping with the flu vaccination campaign, scheduled to start in March. “Vaccination will be carried out at 5,200 vaccination posts across the 545 municipalities of São Paulo State, with the possibility of expanding this number to 10,000 posts, including bus terminals and schools,” said biomedical expert Regiane de Paula, from the Center for Disease Control (CCD) of the São Paulo State Health Department (SES-SP). “The initial cost of the operation is estimated at R$100 million,” she added.

The immunization campaign is expected to involve 54,000 health workers and 25,000 security agents, offering vaccines to anyone in the state of São Paulo. “We will not close our borders to residents of other states,” said Jean Gorinchteyn, state health secretary, at the press conference at which he announced São Paulo’s vaccination plan. The plan also includes the supply of up to 4 million doses to other states should they request it.

In December, researchers from the COVID-19 Observatory, a group of experts from universities and research centers in the state of São Paulo, released a document entitled “There is still no national COVID-19 vaccination plan,” describing the set of measures previously announced by the government, which estimated that vaccination would begin in March, as nothing more than a “rudimentary outline.”

On Saturday 12, Brazilian attorney general José Levi, representing the Ministry of Health (MS), submitted a national COVID-19 immunization plan to Federal Supreme Court (STF) Justice Ricardo Lewandovski, who is overseeing legal challenges to the federal government’s response to the epidemic. Over the following days, the plan was criticized for not presenting a date to begin the vaccination campaign, among other reasons. Academics who had attended meetings at the ministry also complained that their names were on the document without their consent.

The Ministry of Health expects to purchase 150 million doses from AstraZeneca, Pfizer, and Sinovac. Three shipments of CoronaVac arrived In November and December—another three were scheduled to arrive by December 31—totaling 10.8 million doses, which are being bottled at the Butantan Institute. According to Dimas Covas, stocks should reach 46 million doses by mid-January and the São Paulo government intends to discuss the possibility of also vaccinating residents from other regions of the country with the ministry. Some states and municipalities, such as Belo Horizonte, are negotiating deals to obtain the vaccine directly from the São Paulo–based institute.