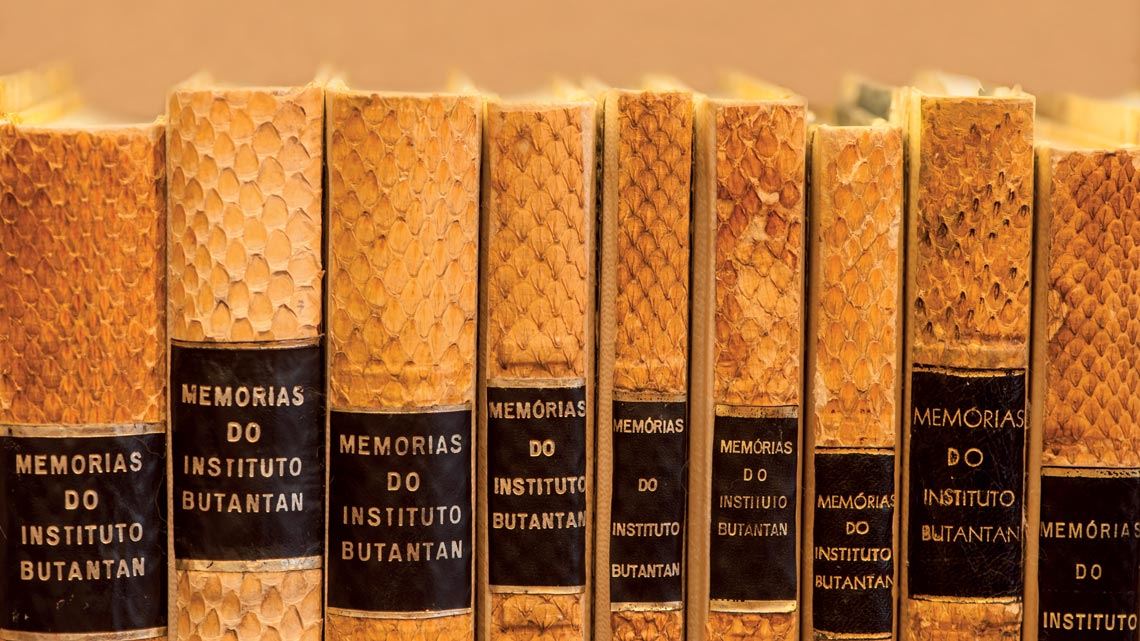 The collection of the journal Memórias do Instituto Butanatan, bound with snake leather

In January 1916, Vital Brazil (1865–1950) was in New York, USA, for a scientific conference when he was called to take care of an employee at the Bronx Zoo who had been bitten by a rattlesnake and was not improving with other treatments. The Brazilian physician applied the serum he had brought with him and the man improved in a few hours. Reported in the New York Times, the event brought international visibility to the institute that the Minas Gerais physician had run for 15 years.

The institute was born some years earlier. During the bubonic plague outbreak in Santos in 1899, São Paulo physician Emílio Ribas (1862–1925), director of public health for São Paulo, realized that the outbreak could spread—in fact, soon after this, it arrived in the city of Rio de Janeiro (see Pesquisa FAPESP issue no. 294). Therefore, an antiplague serum would have to be produced so as not to depend on scant imports. The São Paulo government accepted this argument, bought the Butantan property in the western zone of the capital of São Paulo state, and built a production facility, initially as an annex to the Bacteriological Institute, today the Adolfo Lutz Institute. The laboratory was autonomous by 1901, using the name Soroterapico Institute, and in 1928 it was officially moved to Butantan, as it was called from the beginning.

“Butantan, like the Oswaldo Cruz Institute in Rio de Janeiro, was born out of the inspiration of the French Pasteur Institute and integrates the plan for epidemiological safety for the state of São Paulo, developed by Emílio Ribas, which includes the Bacteriological Institute and the Vaccinogenic Institute, incorporated into Butantan in 1926,” shares public health physician Nelson Ibañez, coordinator of the special laboratory for the History of Science at the institute.

As a graduate of medicine in Rio de Janeiro, Vital Brazil Mineiro da Campanha participated in the fight against the bubonic plague as an employee of the Bacteriological Institute. After taking on the leadership of Butantan in 1901, as its first director, he increased the production of serums. With the support of Rio physician and zoologist Adolfo Lutz (1855–1940), he conducted the first experiments with snake venoms, which he had begun to study four years earlier, producing the first serum vials for the venom of the jararaca (lancehead) and rattlesnake. As a result of deforestation and an increase in farming in the interior of the state of São Paulo, in the early twentieth century, close to 3,000 people died each year in the state from snake bites. He also built a literacy school for children and adults, created public campaigns for field dwellers to protect themselves from venomous animals—which were needed to reduce rodent propagation—and invented a safe wooden box for farmers to send snakes by train and receive serums in return.

The pioneer in the treatment of snake bites was Portuguese physician Otto Wucherer (1820–1874), who lived in Salvador, Bahia, and wrote an article about the topic in the Gazeta Médica da Bahia (Bahia Medical Gazette) in 1867. Vital Brazil went further and discovered something important: in 1901, he concluded that each serum neutralized the venom of only one taxonomic category of snakes—different from what was confirmed by researchers at the Pasteur Institute in France, who said that the serums could act against any venom. In 1911, he published the book A defesa contra o ofidismo (Defending against ophidism), with descriptions of Brazilian snakes and ways to prevent and treat venom poisoning (see Pesquisa FAPESP issue no. 180).

His first stint managing the institute ended in 1919, when he was unhappy with the difficulty of keeping and contracting employees due to low salaries. He then accepted an invitation from the Rio de Janeiro government to establish in the state capital the Institute for Health, Serum Therapy, and Veterinary Medicine, soon renamed the Vital Brazil Institute, and years later transformed into a private institution. The doctor returned to São Paulo in 1924 and led Butantan for three more years.

The directors of the São Paulo institute were not exclusively executives and spent time in the field. Before taking the position of Vital Brazil in 1919, Bahia physician Artur Neiva (1880–1943) had participated in a nine-month expedition to the interior regions of the states of Bahia, Pernambuco, Goiás, and Piauí, along with researchers from the Oswaldo Cruz Institute, to do surveys of the flora, fauna, diseases, and the living standards of their populations. Para physician Afrânio do Amaral (1894–1982), who succeeded Neiva, coordinated the first expedition to the island of Queimada Grande in 1920. The island had two snake species, one of which was the jararaca-ilhoa (Golden Lancehead) (Bothrops insularis), exclusive to the island. Amaral described this species, which was unknown to researchers, studied its venom, and returned to the island seven times.

In 1948, then governor of São Paulo Adhemar de Barros (1947–1951), decided to intervene in the work of Butantan Institute and reduced the research that had no direct connection to the production of antiophidic serums. The director of the institute, Eduardo Vaz (1947–1951), dismissed researchers in the areas of chemistry and endocrinology. The terminations mobilized other scientists from São Paulo and were one of the reasons for the creation of the Brazilian Society for Science Progress—SBPC (see Pesquisa FAPESP issue no. 269).

Lemos Monteiro Pavilion, one of the institute’s buildings, in 1930
Butantan Institute / Center of Memories

Upon assuming the leadership of the institute in 1983, French biologist Willy Beçak modernized the electrical and telephone networks and the production techniques for serums and vaccines. Contracted in 1971 as an intern and later as a research assistant, biologist Giuseppe Puorto, current director of the Center for Cultural Development and of the Biological Museum, had a habit of spying on the serum purification room on his way to his venom extraction laboratory. “The technicians, who were not wearing gloves or boots, put the bottles on the floor, with a funnel and a paper filter, and that is where they filtered the serum,” he observed. “I had to take a serum for the first time in 1974, after a laboratory accident, and I had a severe allergic reaction because it was not very pure.”

To improve the production of serums and vaccines, in the early 1980s, Beçak contracted physician and biochemist Isaias Raw, who had recently returned from spending 10 years in the United States (see Pesquisa FAPESP issue no. 113). “I discovered that the serums were not working,” shares Raw in 2019 through a testimonial for the book Ciência para o Brasil – 70 anos da Sociedade Brasileira para o Progresso da Ciência (SBPC) (Science for Brazil – 70 years of the Brazilian Society for Science Progress). “They immediately authorized me to contract 24 people for the laboratory. They were recent PhDs who learned how to integrate research with production. I valued the people in production, and we formed a strong group,” he added, regretting that the production lines of the vaccines for pertussis, diphtheria, and others, which he had implemented, were deactivated in 2010 due to restructuring. “We were totally in the hands of multinationals.”

“The team of the biotechnology center, created by Isaias Raw, moved the production of serums and vaccines away from artisanal processes toward closed systems with quality control,” comments chemist Luciana Cerqueira Leite, who worked with Raw for 30 years. “He also studied new adjuvants that strengthen vaccine action and established the transfer of technology to the production of the flu vaccine with Sanofi, and the dengue vaccine with the National Institutes of Health (NIH) in the United States.” Physician and immunologist Jorge Kalil, director from 2011 to 2017, made another significant change to the production lines and strengthened the engineering teams (see Pesquisa FAPESP issue no. 240).

Puorto participated in this modernization when he first perfected the extraction of snake venoms. He created a tilted wooden box with a front window to avoid the technician breathing the venom particles after drying—today this work is done in large, safe structures. “I also designed an anatomic table with three levels, to hold the snake’s body, no longer having to rely on the handler’s arm to keep the animal in place,” he shares. “When the carpentry team brought the table, five years later, I had completely forgotten about it. Today, the table is made of stainless steel.”

In 2005, soon after establishing the Education Center at the Biological Museum, Puorto answered a phone call from a teacher who asked if the institute had any activities related to the metamorphosis of butterflies for preschool children. “We do not have this, but we are going to create something and you can bring your students,” he responded. Along with his team, he developed an activity to present metamorphosis in a fun way: children entered a cocoon made of bamboo shoots that transformed into butterflies with cardboard wings. This is one of the planned activities for the Butantan Science Park, a project to be launched once the pandemic lets up, with the objective of integrating the institute’s cultural activities.