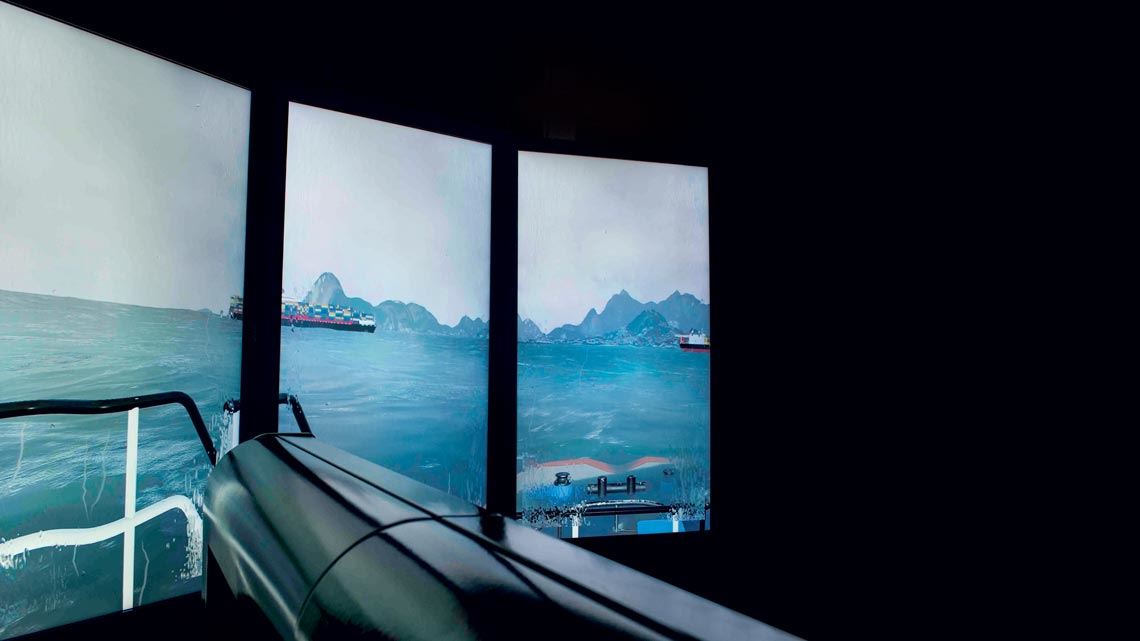 A simulation cabin at the LabOceano wave tank for marine research

The World Health Organization (WHO) declared the COVID-19 outbreak a pandemic on March 11. Five months and two days later, on August 13, the Alberto Luiz Coimbra Institute of Engineering Research and Graduate Studies, of the Federal University of Rio de Janeiro (COPPE-UFRJ), announced its tenth contribution to the effort to combat the disease. In a session at the National Academy of Medicine (ANM), scientists from UFRJ, Instituto Vital Brazil (IVB), and Oswaldo Cruz Foundation (FIOCRUZ) unveiled a potential breakthrough that could lead to the development of a serum-based treatment for COVID-19.

Plasma from four horses supplied by IVB was inoculated with a recombinant S protein from the novel coronavirus, produced at COPPE’s Cell Culture Engineering Laboratory (LECC). The material has neutralizing antibodies 20 to 50 times more potent against SARS-CoV-2 than plasma from people who have contracted the virus. The treatment still needs to undergo trials in people to test whether it is safe and works to treat COVID-19, but positive early results have led the researchers to apply for a patent for the serum therapy.

Other collaborative projects at COPPE in response to the pandemic include a ventilator that has been successfully tested on patients at the Clementino Fraga Filho University Hospital (HUCFF-UFRJ), an antiviral fabric for protective masks, a serology test for detecting COVID-19 antibodies, at a cost of less than R$ 5, a hospital-grade 70% alcohol product produced using a filtration technology that removes impurities from ethanol, and a coronavirus self-assessment app. “We have more than 100 researchers working on engineering solutions to support the pandemic response,” says COPPE director Romildo Dias Toledo Filho.

COPPE is one of the most prestigious engineering education and research centers in Latin America. Over the past 57 years it has established itself as a leading developer of marine engineering technologies for deepwater oil exploration and the shipbuilding industry. It has also collaborated in developing technologies for Brazil’s nuclear and renewable energy sectors, and has made significant contributions in the fields of infrastructure, sustainability, and climate change. The coronavirus pandemic brought a national problem to the institute’s attention. “Brazil is dependent on imports for more than 80% of the supplies needed in the COVID-19 response. And the rate is not much lower for other diseases,” says Toledo.

COPPE decided to center its efforts in the area of healthcare engineering through a thematic program that is leveraging the infrastructure used by its 13 graduate programs. The program format is still under development and should be unveiled by the end of the year. Information technology applications in agriculture, environmental engineering, and sustainable cities are additional recent focus areas. And there’s more in the pipeline. Within the coming months, COPPE will launch its Entrepreneurship and Innovation Laboratory, a multidisciplinary organization with a mission to support the development of solutions for industry while also serving as a pre-incubator for technology-based startups.

Promoting entrepreneurship, says Toledo, is essential in today’s economic landscape. “Brazil is becoming deindustrialized and engineers fresh out of college are unable to find jobs. We need to train students who are able to create their own job market,” he says. COPPE has two incubators. The first, for technology startups, has supported 73 fledgling companies so far, and currently has 27 resident firms.

The other incubator, for cooperatives, has supported 320 cooperatives in projects to deploy technology and create value in a wide range of activities, from fishing through tourism and handicrafts, to biodiesel, creating more than 5,000 job posts. In an especially impactful initiative, the incubator supported the development of a handicraft cooperative for mental health patients at the Philippe Pinel Institute, in Rio de Janeiro. The initiative helped to reduce hospitalizations and the need for prescription drugs, and was used as a model for a livelihood program launched by the Ministry of Health in mental health centers.

COPPE’s recent initiatives build on a legacy of developing engineering solutions to challenges facing society. It was with this goal in mind that Alberto Luiz Galvão Coimbra originally founded the Institute of Engineering Research and Graduate Studies (COPPE) in 1963, which was later renamed in his honor in 1995, although retaining its original acronym.

At the time of COPPE’s founding, engineering schools were largely dedicated to training professionals for the labor market. Coimbra wanted his institution to invest in research and help to develop advanced manufacturing capabilities in Brazil. “He refused to accept the prevailing notion that technology had to be imported from abroad,” says chemical engineer Angela Uller, COPPE’s head of Technology and Innovation. Coimbra adopted a graduate education model that was novel in Brazil, with tenured, full-time professors who were focused on research.

His project received valuable support from economist José Pelúcio Ferreira, then director of the National Bank for Economic Development (now renamed the Brazilian Development Bank, BNDES), whose mandate included supporting technical education in industry. Coimbra and Pelúcio drafted the guidelines for the Technical and Scientific Development Fund (FUNTEC), created in 1964 to support research and development (R&D) collaborations between technology institutes and companies.

One of the first companies to sign a research contract with COPPE was Petrobras, in 1968. Since then, COPPE has been involved in some of the most groundbreaking solutions developed for the oil industry in Brazil. In 1977, when Petrobras began its first foray into deepwater oil exploration, it signed a collaboration agreement with COPPE to design offshore production platforms.

COPPE developed computational methods for structural analysis under environmental conditions such as sea currents, waves, and wind. “This research was at the cutting edge of the global industry, and helped to lift Petrobras to its position as a global leader in deepwater production,” says Juliano de Carvalho Dantas, executive manager of Petrobras’ Leopoldo Américo Miguez de Mello Research and Development Center.

To date, COPPE and Petrobras have collaborated on more than 3,000 research projects that have helped to advance the oil exploration frontier to the presalt layer, at water depths as deep as 7,000 meters. “One of COPPE’s flagship programs is its research on ocean current systems at the Ocean Technology Laboratory,” says Dantas. LabOceano, as the facility is called, is used for hydrodynamic research and is the second deepest tank of its kind, at 15 meters deep. In 2019, Petrobras invested more than R$100 million in research at COPPE.

The institution’s oil and gas expertise has also supported R&D efforts at international oil majors, such as Shell. “Shell’s collaboration with COPPE has given us access to cutting-edge technology and enabled the development of safer, cleaner, more efficient, and sustainable oilfield solutions,” says Carolina Rio, a research executive at Shell. COPPE’s contracts with the Anglo-Dutch oil company were worth an aggregate of R$60 million last year.

Among the successful collaborations between Shell and COPPE is the Advanced Oil Recovery Laboratory (LRAP) at UFRJ’s Interdisciplinary Center for Fluid Dynamics (NIDF). “LRAP is a world-class laboratory that studies complex carbonate reservoirs and is developing technologies for advanced oil recovery in Brazilian reservoirs,” she says. 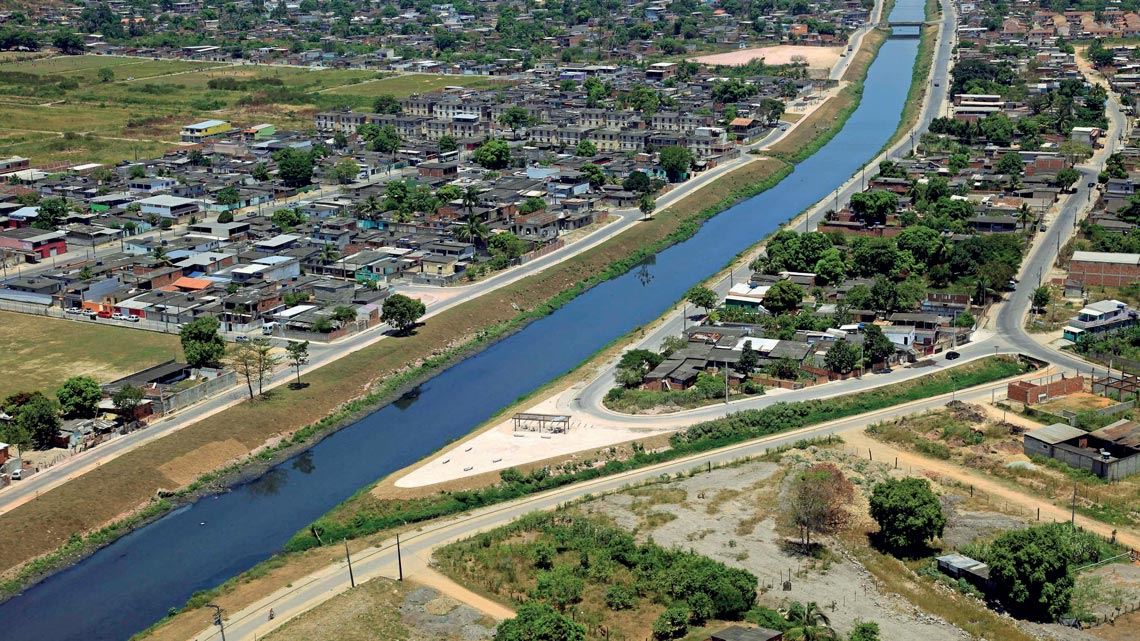 The Iguaçu River in the state of Rio de Janeiro, where COPPE Is implementing a flood management programCOPPE-UFRJ

COPPE’s budget includes allocations from UFRJ and revenues from contracts with corporate partners, the two largest being Petrobras and Shell. In the last two years, COPPE has received R$280,000 from the university each year for upkeep expenses, such as materials and equipment. Expenses on payroll, utilities, and outsourced security and janitorial services are paid directly by the Ministry of Education (MEC), via the office of the dean.

Revenues from contracts with corporate partners were a total of R$192 million as of August this year, and R$430 million in 2019. Contracts are managed by the Foundation for Coordination of Projects, Research, and Technological Studies (COPPETEC)—more than 18,000 contracts have been completed since the 1970s. In 2019, there were 1,150 active projects with companies such as beverage manufacturer Ambev, pharmaceutical manufacturer Eurofarma, petrochemical company Braskem, utility companies Eletrobras and Light, the Atlântico Sul shipyard and, of course, Shell and Petrobras.

“These projects are important in driving innovation and development not only at partner companies, but also at UFRJ. They keep professors connected to industry, and benefit students by exposing them to the real-world activities they will be engaged in after they graduate,” says Uller.

Since inception, COPPE has trained 18,000 master’s and doctoral students. Research and development activity at its 131 laboratories has led to 136 patent applications. In addition to its contribution to education and innovation, COPPE has also influenced policymaking at critical moments in Brazil’s recent history. “We helped to develop nuclear technology in the 1970s, all the while opposing it as unnecessary in Brazil because it was expensive compared to cheaper sources that were still underutilized at the time, like hydropower,” says physicist Luiz Pinguelli Rosa, who served as director at COPPE for four terms and is now a professor in the Energy Planning Program.

COPPE predicted the energy crisis that ultimately led to a widespread blackout in the 1990s. It was also among the first education institutions in Brazil to start efforts to develop renewable energy technologies, less polluting modes of transportation, and water management technologies. Professors at the institute have contributed to the United Nations (UN) Intergovernmental Panel on Climate Change (IPCC) since the 1990s. Seven researchers from the institute were members of the group that published the climate-change report that was awarded the 2007 Nobel Peace Prize.

Climate mitigation is another item on the institution’s agenda. An example is COPPETEC’s Iguaçu Project, a collaboration with the government of Rio de Janeiro that is implementing flood prevention and remediation measures in the Iguaçu River basin, in Rio de Janeiro State. The project is building dams and dikes for flood management, and parks and recreational facilities that help to keep houses and waste away from buffer areas. “Our greatest expertise is in bringing together different engineering disciplines to solve problems for society,” says Toledo.