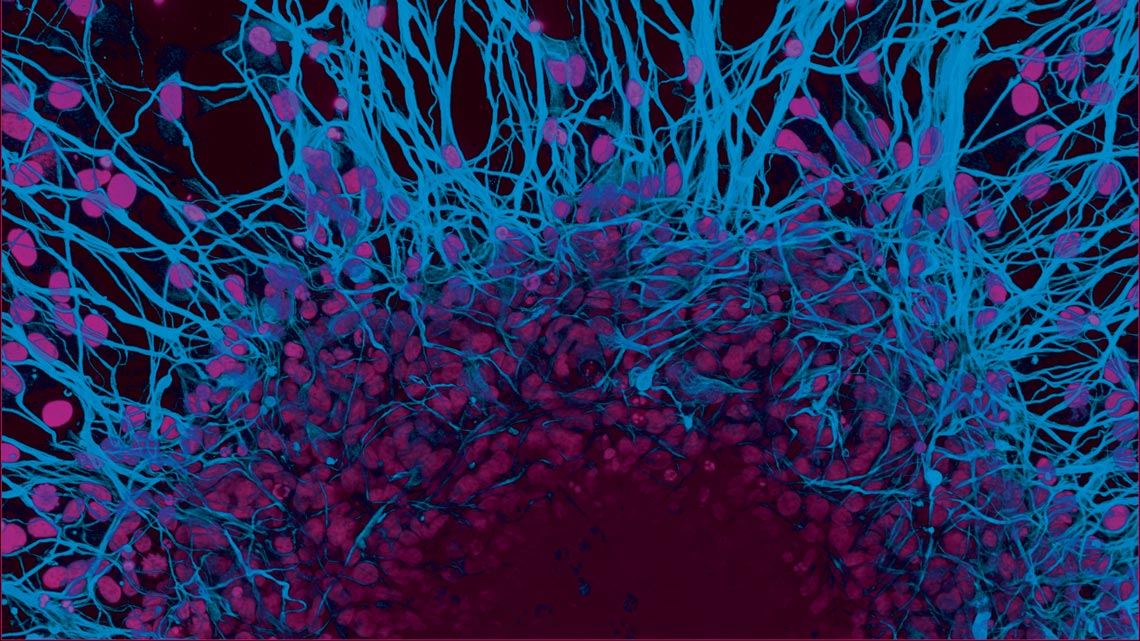 Lab-grown human neurons developed by a team at UFRJ

“University education is only as strong as its research.” This maxim, often repeated by Brazilian physician Carlos Chagas Filho (1910–2000), the son of renowned sanitarist physician Carlos Chagas (1878–1934), still holds true today as it applies to the Institute of Biophysics he created in 1945. One of UFRJ’s flagship life sciences centers, the institute was originally founded at the Praia Vermelha campus in the 1940s, and later moved to the Ilha do Fundão campus on the banks of Guanabara Bay, in the early 1970s.

In the decades since, scientists and research groups in a variety of life-science fields have received training at the institute and continued the work of those early pioneers. This article describes the work of some of these researchers. Neuroscientist Roberto Lent, of the Institute of Biomedical Sciences (ICB), has investigated the formation and reorganization of connections in the brain for nearly 40 years, and is a leading name in neuron counting research. Neurology studies are among UFRJ’s strongest areas of research. “In one of our papers, we showed that memory loss and other neurological changes occur through mechanisms identical to those involved in Alzheimer’s disease,” says biochemist Sergio Teixeira Ferreira, a researcher at the Carlos Chagas Filho Biophysics Institute (IBCCF), as it is called today.

Experiments conducted at UFRJ have also shown that the Zika virus can infect and reproduce in adult brain tissue, producing new viral particles that can infect other nerve cells. The study provided new insight into the virus’s reach. Before their discovery, researchers thought mature neurons were resistant to infection. This is because in previous research, the pathogen had been detected only in developing or immature neurons in still-developing brains, such as in embryos, causing microcephaly and other neurological malformations. From a public-health perspective, these findings showed that, in addition to newborns and pregnant women, adults would also need to be monitored following infection by the virus.

A group led by neuroscientist Fernanda De Felice at the Institute of Medical Biochemistry (IBqM), often working in collaboration with Ferreira’s laboratory, has made important contributions to our understanding of Alzheimer’s disease. Early last year, De Felice published a study showing that physical activity can improve memory and protect neurons from the toxic effects of compounds associated with Alzheimer’s. This effect has been linked to a hormone called irisin, which is released by the muscles during exercise. “Our studies, including the discovery of irisin, show the importance of a healthy lifestyle, including exercise and a balanced diet, for preserving brain health, especially in the context of Alzheimer’s disease,” says the researcher. Alzheimer’s disease, a condition which affects around 35 million people worldwide, causes severe memory loss.

The Institute of Biology, one of the 26 research units at the Health Sciences Center at UFRJ, has also made important scientific discoveries over the years. Amílcar Tanuri, a medical doctor who heads the Laboratory of Molecular Virology, is among Brazil’s most respected authorities in his field. A leading expert in HIV, its genetic diversity, and resistance to antiviral drugs, Tanuri is currently conducting research to understand the immune response in Brazilian patients infected with the novel coronavirus.

Other research groups have made important contributions in genetics, psychiatry—such as Joel Birman’s work in psychoanalysis and philosophy at the Institute of Psychology—and pharmacology. In the latter field, Eliezer Barreiro’s research in medical chemistry is especially noteworthy. Wanderley de Souza is a prominent figure in the field of ​​morphology and electron microscopy, and Jerson Lima da Silva and Débora Foguel in the areas of ​​structural biology and protein folding.

Stem-cell research conducted by biologist Stevens Rehen, a researcher at ICB and a collaborator at the d’Or Institute of Research and Teaching (IDOR), has also received much acclaim. He produces neurospheres and brain organoids that are used to study how viral infections or certain compounds affect brain development. In a study published in March 2020 in PLOS Neglected Tropical Diseases, his group found that saxitoxin, a toxin produced by a cyanobacterium in polluted water, augments the damage caused by the Zika virus on brain tissue. Other of his research interests include psychedelic substances, such as ayahuasca, which alter people’s perception of reality and emotions and create a sense of wellness. “In recent years, we have explored at the molecular level the effects of psychedelics on human neural tissue for therapeutic applications,” explains Rehen.

Life sciences centers at UFRJ have been home to researchers from a range of backgrounds. Italian-born physician Leopoldo de Meis (1938–2014), with his research in biochemistry and metabolism, and his passion for combining art, science, and outreach, became one of the most prominent names to pursue a career at the university. Another foreign-born researcher is 79-year-old Radovan Borojevic, a Croatian scientist who began his training in Zagreb, but graduated in biology at the University of Strasbourg after emigrating to France, of which he became a citizen as a young student. He later came to Brazil, working at institutions in the Northeast before moving to Rio de Janeiro. A specialist in cell therapies and regenerative medicine, Borojevic joined the Institute of Chemistry in the early 1980s. “At the time, working conditions were less than ideal. I had helped to establish a collaboration between the university and  Institut Pasteur, in Lyon, and spent a few months alternately in France and in Rio,” recalls Borojevic, now a professor emeritus at UFRJ. “Working at UFRJ was more practical than at Pasteur. This was one of the reasons that led me to apply for a permanent position as professor and establish roots at the university.”