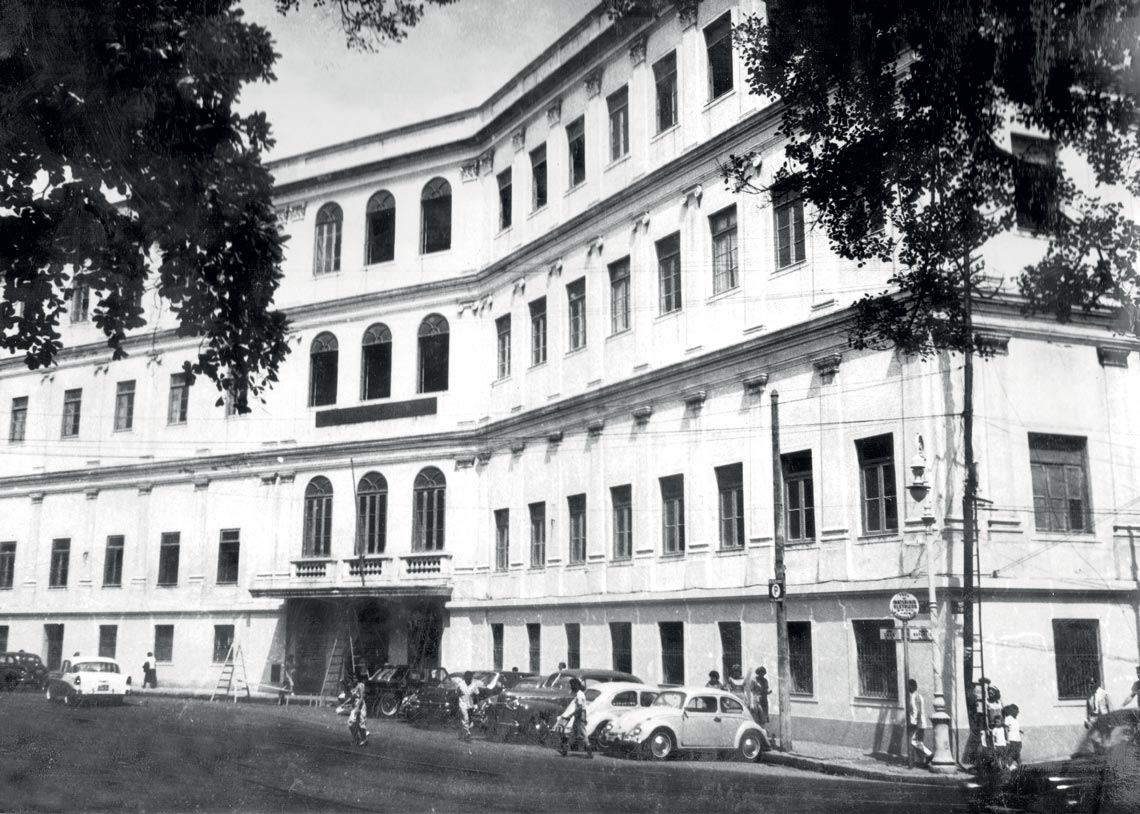 The National School of Law, undated

This September, the Federal University of Rio de Janeiro (UFRJ) is marking its 100th anniversary with plenty of reasons to celebrate. Not only has it grown to become one of the largest and most productive higher education institutions in the country, but it has also seen its contingent of black, mixed-race and indigenous students steadily increase—from 3 in 1970 to 4,858 in 2019; its total student population of 80,000 in Rio de Janeiro and across the state is second only to the University of São Paulo’s (USP) population of 100,000. The anniversary celebrations, which were postponed because of the pandemic, included a “Festival of Knowledge” in July featuring 2,000 on-line presentations by students and professors, with a viewership of around 30,000 people, and will be followed by the launch of a documentary about the history of the university on September 7.

Originally called the University of Rio de Janeiro, UFRJ was created in 1920 through a merger of three education institutions originally located in the city center: the Polytechnic School, created in 1792; the School of Medicine, founded in 1808; and the School of Law, established in 1891. The School of Medicine and the Polytechnic School were later moved to the better-known main campus at Ilha do Fundão; the School of Law remained in the city center, where it was joined by other units: the Institute of Philosophy and Social Sciences, an eighteenth-century building at Largo de São Francisco de Paula; the School of Music, near the Municipal Theater; the School of Nursing, near one of the university’s nine hospitals; the Valongo Observatory, built in 1926 on Conceição hill, and merged into UFRJ in 1967; the Praia Vermelha campus, founded in 1852 and later transferred to the university in 1949, housing the schools of Physical Education, Architecture and Pharmaceutical Engineering; and the National Museum, established in 1808 and annexed to the University in 1946, and later destroyed by a fire in September 2018.

In the early years, however, the merger of the three schools “did not result in the exchange of knowledge that characterizes the ‘university spirit’,” writes historian Antonio José Barbosa de Oliveira on the UFRJ website. “The university fulfilled only the letter of the law” (see). In 1937, Getúlio Vargas’s (1882–1954) Estado Novo regime (1937–1945) passed a law that created new education centers, incorporated several others, and renamed URJ as the University of Brazil, a name still displayed at the entrance of many buildings in Rio, like the Praia Vermelha Palace.

“Getúlio Vargas intended for to the University of Brazil to serve as a model for future institutions,” says science historian Tatiana Roque, who organized the anniversary celebrations as head of the Science and Culture Forum. The reorganization involved the incorporation of students from, and the subsequent closure of, the University of the Federal District (UDF), which had been founded in 1935 by educator Anísio Teixeira (1900–1971), and had adopted innovative teaching methods. “Vargas’s decision was a conservative reaction to the progressive movement that had led to the creation of UDF,” she observes. The University’s current name was adopted as part of the University Reform in 1965, when the federal government standardized the names of all public higher education institutions in the country. 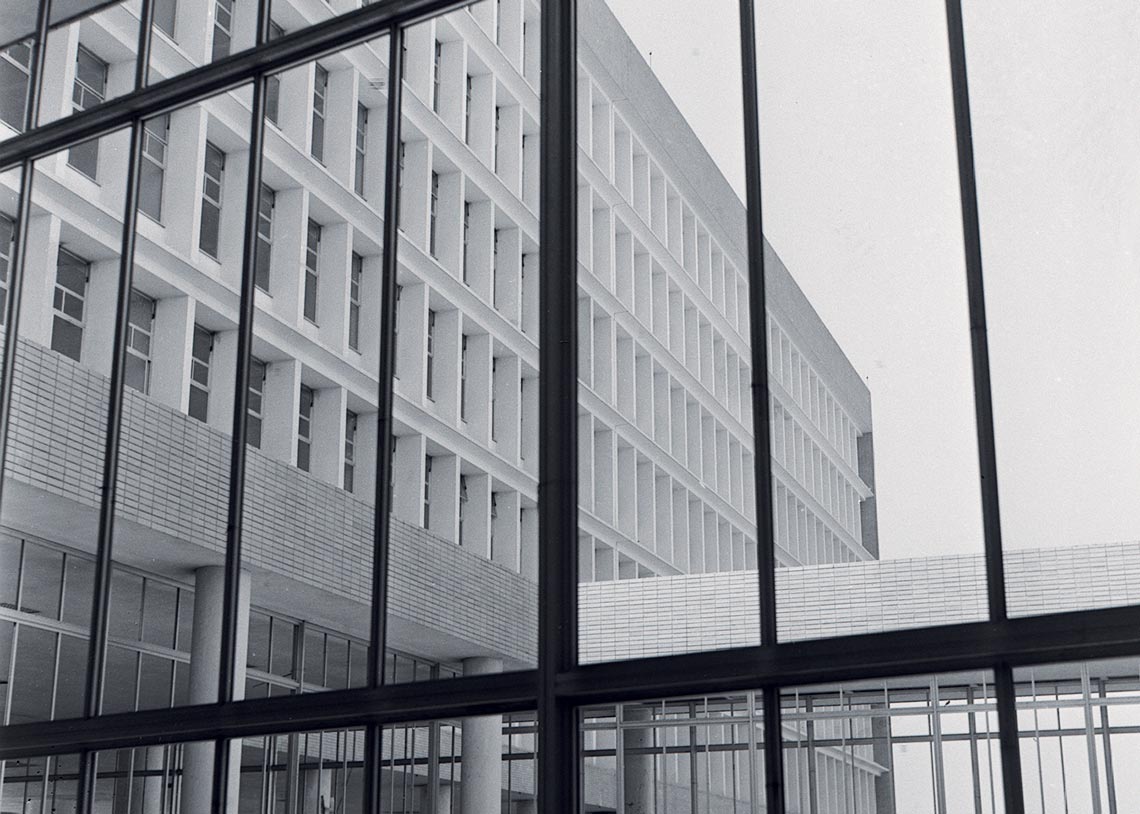 The School of Architecture and Urban Planning at Ilha do Fundão, in 1960Archives / Agência O Globo

In 1987 and 1988, during the Constituent Assembly for the new Constitution, “many students, professors, and even the dean at the time [chemical engineer Horacio Cintra de Magalhães Macedo] advocated for and contributed to the drafting of article 207, which granted universities autonomy of governance,” says Roque (see the special edition University Autonomy). “Anthropologists at the National Museum also played an important role in securing the rights of indigenous peoples in the Constitution.”

In 1937, physician and biochemist Carlos Chagas Filho (1910-2010) left his posts as professor at the School of Medicine and researcher at Oswaldo Cruz Institute to create the Laboratory of Biological Physics, marking the beginning of formal scientific research at the university. He adopted the working methods he had been exposed to in France and England, but with a nationalist strategy that was reflected in his choice of research subject: the electric eel (Electrophorus electricus), an Amazon fish species. 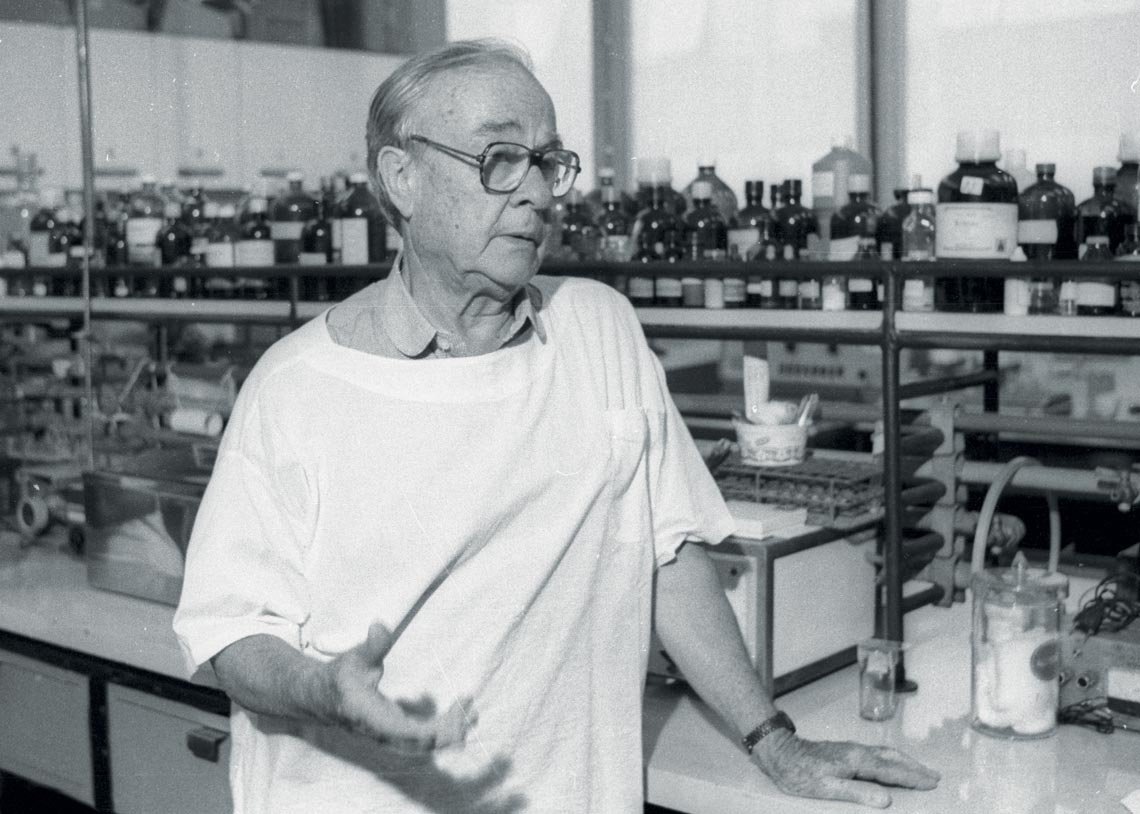 “Carlos Chagas Filho was a central figure in the development of scientific research in Brazil,” wrote Darcy Fontoura de Almeida (1930–2014), a professor of medicine at UFRJ, in a 2003 article in the journal Proceedings of the American Philosophical Society. Over the decades, Chagas arranged for many foreign researchers to work in Rio, and for Brazilian researchers to spend time at institutions in other countries. 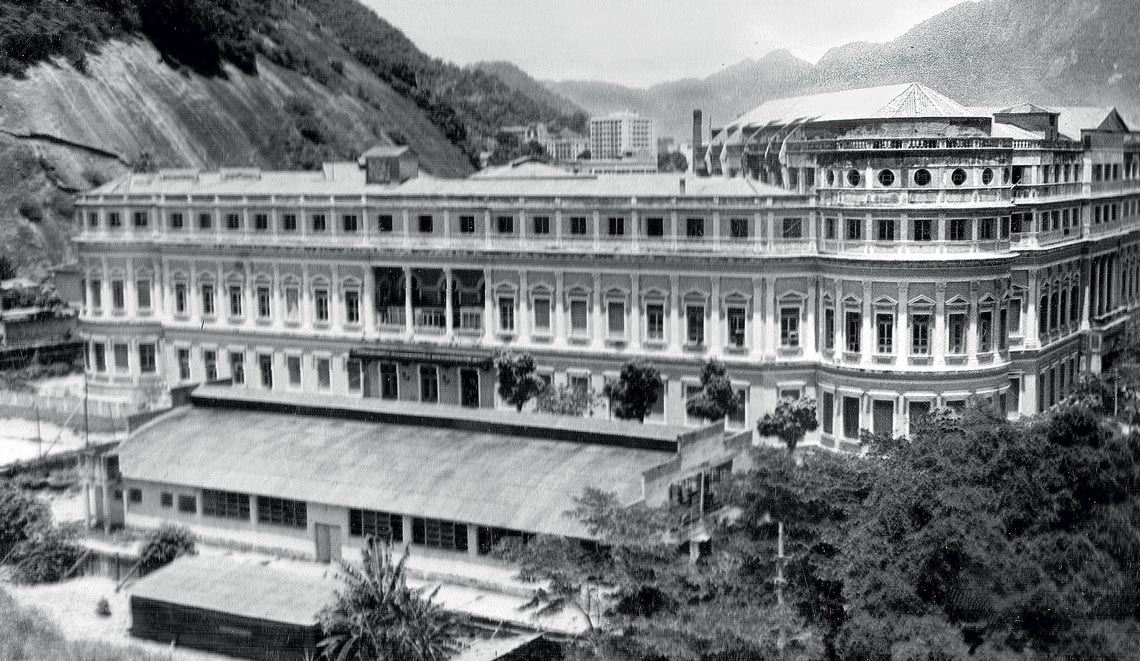 The National School of Medicine, undatedUFRJ

Following the creation of the National Research Board, later renamed the Brazilian National Council for Scientific and Technological Development (CNPq), and the Brazilian Federal Agency for Support and Evaluation of Graduate Education (CAPES), in 1951, research capabilities developed significantly under the leadership of notable scientists. Among them was physician João Christovão Cardoso (1903–1980), who helped to found the Institute of Chemistry in 1959; and physician and geographer Josué de Castro (1908–1973), who founded the Institute of Nutrition and served as its first director in 1946, the same year he published his classic book, The Geography of Hunger, in which he described the stark contrasts in nutrition in Brazil. Physics research saw progress under Joaquim da Costa Ribeiro (1906–1960) and Plinio Sussekind Rocha (1911–1972), and anthropological research developed under Gilberto Velho (1945-2012), among other researchers. Maria Yedda Linhares (1921–2011), a professor, served for a period as Municipal Secretary of Education, during which she led the implementation of full-time schools—known as “Integrated Public Education Centers” (CIEPs)—in Rio de Janeiro during the 1980s and 1990s.

In newspaper Folha de S. Paulo’s University Ranking (RUF) 2019, UFRJ ranked third overall, behind USP and the University of Campinas (UNICAMP) and first for innovation, largely thanks to strong performance by the Alberto Luiz Coimbra Institute of Engineering Research and Graduate Studies (COPPE) (see). In the UK’s QS World University Rankings 2020, UFRJ is also the third-best ranked university in Brazil at 358th, similarly behind USP at 116th and UNICAMP at 214th. In 2019, a report by Clarivate Analytics (InCites) on research output in Brazil placed Rio’s largest university in fourth place among its Brazilian peers, with 14,056 papers published from 2014 to 2018, or 6.56% of total papers published in Brazil over that period, behind USP (47,346 articles, or 22.11% of the total), São Paulo State University (UNESP, 18,523) and UNICAMP (15,539 articles). 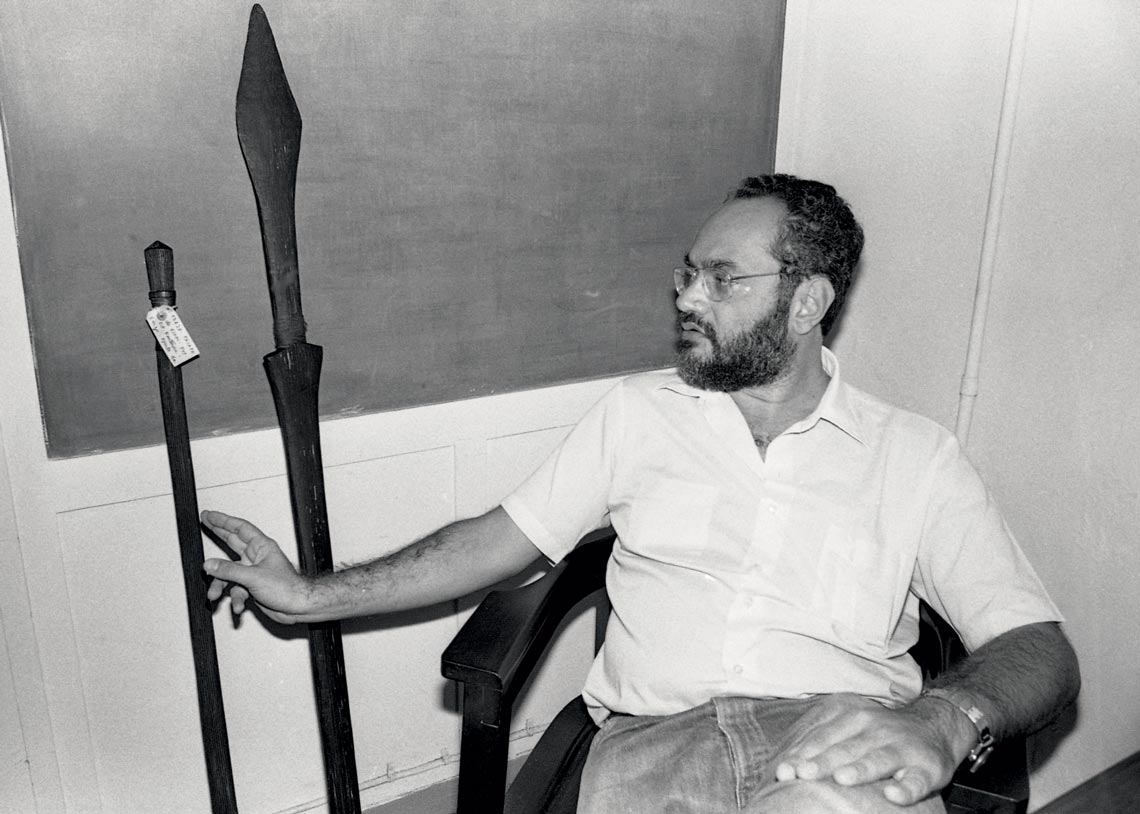 In its 20 years of publication, Pesquisa FAPESP has featured 117 articles, columns and interviews with researchers from UFRJ—an average of one every 2.4 issues. In October 2018, a special edition reported on the aftermath of the National Museum fire that had occurred the previous month, and the difficulties that Brazilian universities face in preserving their scientific, historical, and artistic collections (see Pesquisa FAPESP issue no. 272).

For UFRJ, with its 13 museums and 14 listed heritage buildings, the difficulties continue. “We lack a dedicated budget for maintaining the university’s heritage sites,” says Roque. “Our budget covers neither heritage nor museums.” Because of this, the reconstruction of the Praia Vermelha Palace, including the neoclassical chapel that collapsed in a fire in 2011, is far from finished, although work to rebuild the National Museum is progressing well. 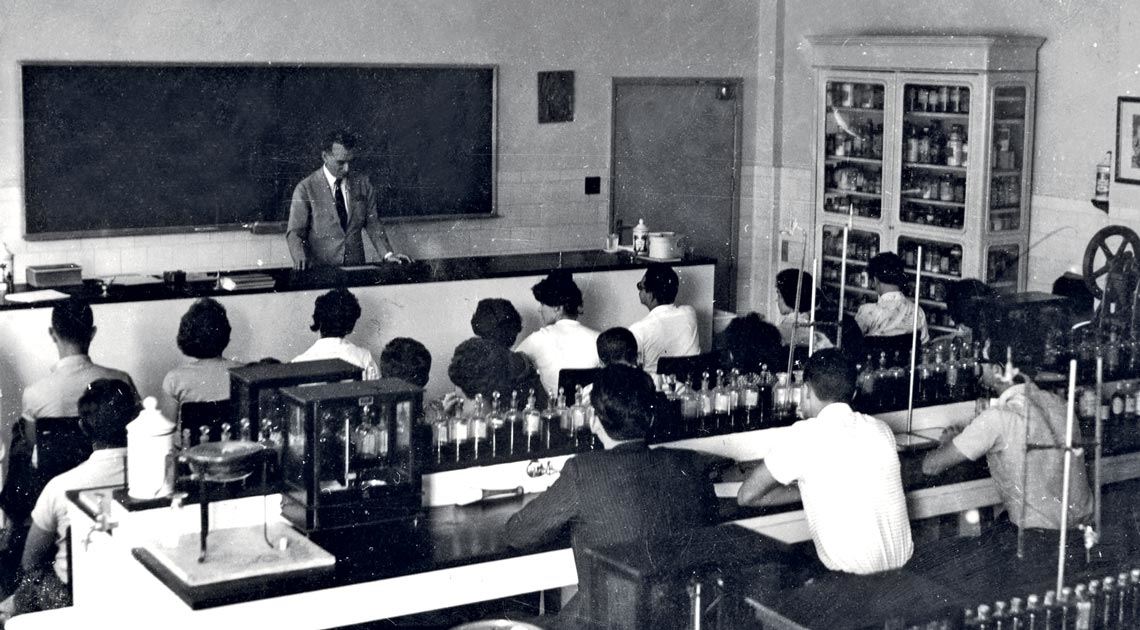 Emílio Diniz da Silva lecturing at the School of Pharmaceutical Engineering, in 1960UFRJ

Martins is leading two projects to help the observatory reach new audiences: the first, in partnership with Instituto Benjamin Constant, is a program to teach astronomy to blind or visually impaired students, using learning aids such as a low-cost tactile Moon; the other, a collaboration with professors and students at the School of Fine Arts, is a guide on the roughly 40 bird species found on the observatory property, due to be published this year.