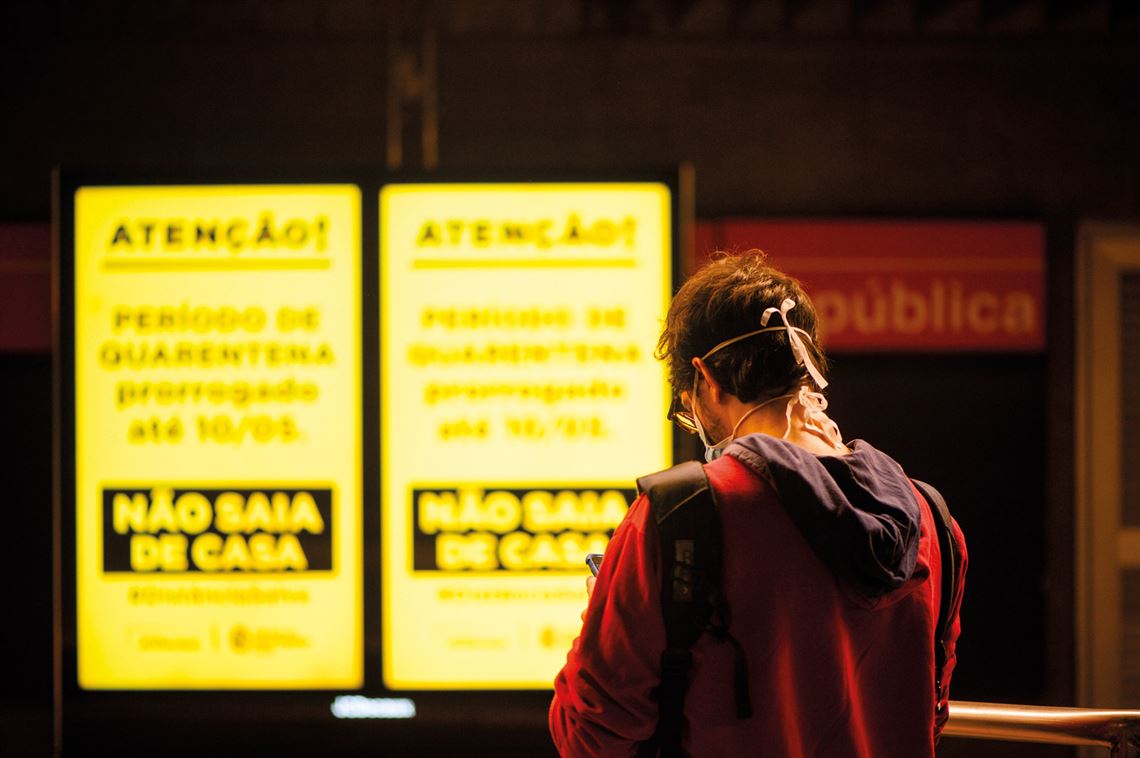 São Paulo subway station at the end of April

At this moment in time, nothing is more crucial to science than understanding the SARS-CoV-2 virus and COVID-19 disease. In four months, the infectious agent and the mysterious clinical condition it causes have spread around the entire world. Gradually, cities, countries, and continents have shut down, with quarantines and isolation measures—some stricter than others—the only known way of delaying the pandemic. Economies have slowed significantly. Confirmed cases are now counted by the millions, and deaths by the hundreds of thousands. By the beginning of May, Brazil had confirmed more than 100,000 cases, with over 7,000 deaths. But the fear, anxiety, and uncertainty generated by the invisible invasion of the novel coronavirus has not stopped science. On the contrary, it has catalyzed a multidisciplinary research effort, centered around different facets of the pandemic, in an unprecedented endeavor for the current generation of scientists. Between January and April this year, in just 120 days, the scientific literature on SARS-CoV-2 and COVID-19 published in journals indexed by the PubMed database increased from zero to 8,000.

This edition, dedicated to various aspects of the pandemic, presents a fraction of the knowledge produced by these studies, which has proven important but still not enough to stop the advance of the virus and find an effective treatment for the disease. The personal and professional lives of many researchers, as described in the testimonials of Brazilian scientists shared throughout this edition, have changed dramatically as the new coronavirus has spread. Our website (www.revistapesquisa.fapesp.br) features more testimonials and daily coverage of the pandemic.

First identified in the little-known Chinese metropolis of Wuhan at the turn of the year, COVID-19 was initially described as a form of pneumonia of unknown origin. Today, as well as the fact that the disease is caused by SARS-CoV-2, doctors and researchers know that severe damage to the lungs of critically ill patients is the most typical clinical manifestation of COVID-19, but not the only one. New academic studies and the clinical experience of treating a large number of individuals infected by the virus suggest that the disease can also affect other organs, such as the kidneys, intestines, brain, heart, and blood vessels. Unexpected strokes in relatively young patients (aged 50 or younger), for example, have been associated with COVID-19 in hospitals in the USA (see article).

Critically ill patients are admitted to Intensive Care Units (ICUs) and need to be intubated so that they can breathe with the aid of artificial respirators. In these cases, a hospital bed without a mechanical ventilator can be a death sentence. These devices have quickly become the most sought after item in many countries during the pandemic. Brazil has around 68,000 respirators and urgently needs more. Last month, the federal government signed a contract with São Paulo–based company Magnamed, which has received funding from FAPESP, to buy 6,500 respirators. The country has a history with this type of device: in the 1950s, Kentaro Takaoka (1919–2010), an anesthesiologist from São Paulo, created a portable pulmonary ventilator, known as the takaokinha.

An intense search for drugs and treatments capable of eliminating the infection is underway on several fronts. More than 70 remedies, including antivirals, antimalarials, and anti-inflammatory drugs, are currently being tested. The transfusion of plasma—the liquid part of the blood, rich in defense cells—from patients who have recovered from the novel coronavirus to critically ill patients is also under analysis. A team led by Brazilian-born immunologist Michel Nussenzweig, from the Rockefeller University in New York, is preparing to collect blood from people who have recovered from the disease with the hope of synthesizing antibodies in a laboratory. “There is no way of knowing whether [this strategy] will work until it has been tested. If we have no vaccine or effective treatment in the next six months, I think it’s worth a try. The antibodies will almost certainly work, but they will serve as a plan B, in case other options fail,” says Nussenzweig. In an accelerated research environment, six vaccines are already being trialed on humans.

Covid-19 has been confirmed on all continents and in at least 210 countries and territories—more than the number of United Nations (UN) member states. In Brazil, the disease has infected and killed people in all 26 states. In an unequal and ethnically diverse country where more than 80% of the population lives in cities, significant numbers of Brazilians are at risk in crowded slums and other informal housing on urban outskirts. These are the people most exposed to the virus and who will suffer most if the national healthcare system collapses. At the same time, looking deeper into an almost forgotten Brazil, where indigenous reserves are home to 305 different peoples, the arrival of the new coronavirus is evoking memories of diseases brought by white colonizers that decimated entire villages in the not-so-distant past.