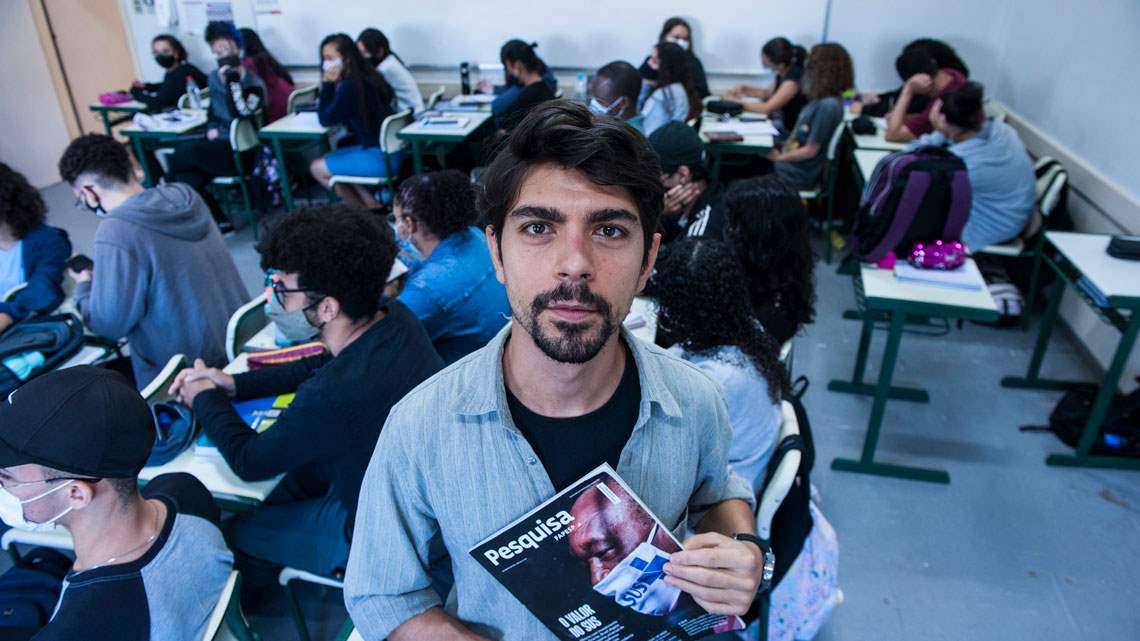 At ETEC in Hortolândia, João Neves continues to use the magazine as a source of information and material for discussion

When the pandemic hit, I was planning to go to Norway. I’m pursuing my doctorate in history at UNICAMP [University of Campinas], and I was waiting for a reply from FAPESP’s BEPE Scholarship [Research Internship Abroad], to do a study period at the University of Oslo. The documents were forwarded, and everything indicated that it was going to happen.

I study the urban history of São Paulo as narrated by the punk movement of the 1980s, a cultural practice that exalts both trash and luxury, the underground and the galleries of the cities, in resentment and revolt. These people produced a specific narrative about urban violence, degradation, and the anguish they experienced. In the exchange program, I was planning to research the bridge between the punks from São Paulo and the Nordics, who were active in communications and produced zines [independent artistic publications, usually in magazine format, made of collages from other magazines and newspapers], letters, and records. Due to the pandemic, everything was canceled. I couldn’t go and decided to work with the material I could get online. In order to keep from going crazy, I decided to focus my energy on my research and the pedagogical project of teaching classes with young people. It’s what saved me.

Knowing I would have to stay at home, I focused part of my efforts on creating a website, which wasn’t a part of my initial doctoral project. Luckily, in 2019 I had digitized much of the material from the Movimento Punk Collection at CEDIC [Center for Documentation and Scientific Information] at PUC-SP [Pontifical Catholic University of São Paulo]. Putting together what the collection at CEDIC had already digitized with some documents sent by other researchers, I created a catalog and made it available on a website, which ended up becoming a research product. I managed to do this through a partnership with PUC and the CIEC [Interdisciplinary Center for Studies on the City] at UNICAMP, where I’m part of the research group.

In my classes at the Mogi Mirim Unit of the State Technical School (ETEC) at Centro Paula Souza, I tried to adapt to the situation. As soon as we started the remote-learning regime at the beginning of 2020, I saw that it was cruel, that young people were having internet connection problems and difficulty concentrating for very long. I spent the first semester of the pandemic needing to make montages of images I found on the internet to create appealing content for my students. That was when I realized that Pesquisa FAPESP had everything ready to go. I received the magazine at home and had already taken some copies to the classroom, in previous classes, to talk about one article or another.

During the pandemic, I saw that the website allowed me to download the articles in PDF format, maintaining the configuration of the printed magazine, including the images and also the links. It was just what I needed, because I could use it in online classes and send it to students who couldn’t attend online due to connection problems. It was an immediate solution to a pressing emergency. Since the content features interviews with researchers, in addition to podcasts and useful links, and young people already have their cell phones in their hands, they can travel the web. The students found it interesting and participated, partly because I always tried to create a connection with the reality they were living through.

After seeing that this type of activity worked well in 2020, in 2021 I made a teaching plan that used the magazine throughout the entire year. I created a schedule with a series of articles that I could explore within the history content planned for my two classes of first-year high school students, with 40 young people in each class.

I always tried to make some connection with my doctoral research. While my research involves studying the cultural production of young people from the punk movement of the 1980s, who were distressed, living in urban misery, angry about the political situation in the country, in my classes I was also dealing with young people living in conditions of distress and facing economic problems. And now, they were in the midst of a pandemic.

Because of this connection, I was authorized by FAPESP to dedicate a certain number of hours to these classes, even though I was on a PhD scholarship. I tried to work in didactic activities and thought-provoking themes. Since punk culture was very involved in producing zines built with clippings and collages from other magazines and newspapers, I thought about how to work with this cultural expression.

I began 2021 still doing remote teaching, and thinking I needed to tell the students how pandemics are nothing new in the history of humanity. I found content in the magazine that dealt with exactly this, like in the articles “Similarities between the Spanish flu and Covid-19” and “War against plague.” In the latter, we were able to see how the bubonic plague epidemic affected Brazil at the turn of the nineteenth century into the twentieth and discuss how the country reacted to the situation. We also listened to the “Epidemics in History” podcast. I selected comments and observations from researchers that appeared in the articles, so we could discuss issues of the past, advances in science, and the historical, political, social, cultural, and economic issues around epidemics.

The article “Pandemic as an allegory,” which showed artwork created out of the tragic experiences of the plague, was the subject of several classes. I showed them the artwork and asked what they saw and felt. That article inspired the first semester’s final project, in which I asked them to produce their own allegories. It could be video, photography, podcast, some media they used to tell how they felt about the pandemic.

When we were about to return to in-person classes, during the second half of 2021, we started to discuss what resuming classes would be like. I took a selection of data and information on subjects such as “Beyond the classroom,” and showed images from the gallery “Far from school,” which showed scenes of empty schools, and we watched the video “Distance education and remote teaching during the pandemic.” Based on the studies, statistical graphs, and debates we saw in these materials, we talked about the complexity of our times.

Using the article “Healthy Spaces,” which dealt with changes in architectural structures as a result of past pandemics, we thought about how to apply these ideas to our own return to school. Inspired by the conversations, I proposed that we hold classes outside the classroom. We used the library, the cafeteria, and the patio, where we had conversation circles under trees, on the floor, or with chairs. We rediscovered the school.

And as we returned to school, I presented the printed magazine and proposed a new activity that would span the entire semester: choosing reports and images from the magazine to assemble a permanent panel at the school, inspired by the zines we had studied. In doing so we found a wonderful photo, which was on the cover of Pesquisa FAPESP [edition 300], of a black man wearing a mask that said SUS [Unified Health System], which, at one and the same time, expressed the racial and pandemic issues in Brazil.

At the end of November we set up our panel over two days, during the Black Awareness celebrations. It must be 2.5 meters long by a meter wide and is located in an open-air corridor, where all the school’s students pass through. All the pasted material had QR codes with links to the articles or more information.

I invited a friend from Campinas, the social communications specialist André Moraes, from the Jongo Dito Ribeiro community, to accompany the panel’s construction and share with the students his experience as a jongueiro [practitioner of jongo, a dance of African origin]. The panel has its own narrative, which begins with indigenous peoples and ends with an article on the work of the invisible enslaved. When we finished, we got the feeling of ‘mission accomplished.’ Even with the pandemic, with the difficulties we faced, we got there.

It was the end of a cycle and I was reminded of more difficult times. Like when my parents were infected by Covid-19 in October 2020. My father was hospitalized, while my mother was sick at home. I went from Campinas, where I live, to Uberlândia, to take care of them. When they recovered, I was the one who got sick. I lost an uncle to the disease, and my partner, who came to live with me during the pandemic, also lost relatives. I started doing yoga, hiking, playing the guitar, and saw a psychologist. I created a routine with fixed schedules for work and leisure and I disciplined myself to stick to it.

Now, in 2022, I’m making the final revisions to my thesis, which I will defend in the second semester. I also changed schools and am now a teacher at ETECS in Hortolândia and Bento Quirino, in Campinas. My pedagogical planning is structured based on Pesquisa FAPESP articles, both for history and sociology classes. I’ve found that the magazine can be a great teaching tool. Since it’s worked before, I’m going to continue down that path. As happened in some of the punk trends, we will transform our resentments into the spurs of revolt.