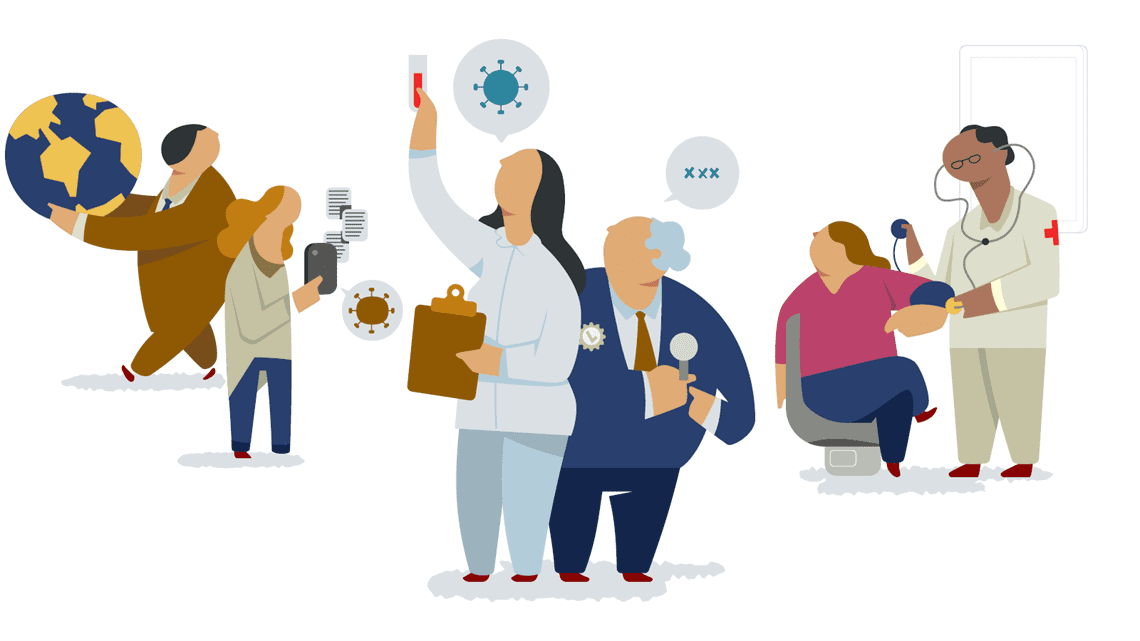 Although a few months ago science may have been looked at with some mistrust by a portion of the Brazilian populace (see Pesquisa FAPESP issue no. 284), today the public sees it as the primary tool for combating COVID-19. Caused by the novel coronavirus (SARS-CoV-2), the illness still has no specific treatment. The repercussions of society’s evolving perception can be observed in a survey published in April. Conducted in ten countries, including Brazil, the research measured levels of public confidence in political, scientific, and social actors within the context of the ongoing pandemic. Global communications agency Edelman surveyed 10,000 people—1,000 from each country—and showed that 85% of respondents want to hear more from scientists and less from politicians on matters regarding the new coronavirus. In Brazil, this number was 89% of those surveyed.

Scientists also appear to be the most reliable source of information about COVID-19 for 91% of Brazilian respondents, followed by personal physicians (86%). Worldwide, international medical organizations such as the US Center for Disease Control (CDC) and the World Health Organization (WHO), appear to be the most reliable sources for 75% and 72% of respondents, respectively. Government officials received 48% levels of confidence in the total percentage; this number was 53% in Brazil. At the same time, worldwide, 74% believe that governments and medical authorities should share more information about new scientific discoveries regarding SARS-CoV-2 and, for 69%, this information should address advances in developing a vaccine against the virus.

Read:
– The reality of data
– Natural guests
– Brazil begins testing
– Predicting the course of epidemics
– Sergio Machado Rezende: Together against COVID-19
– Calculating in the dark
– The size of the pandemic
– The child enigma
– Research during the quarantine

Biologist Atila Iamarino has been a science communicator on the internet for 13 years. For him these results suggest that science is recovering some of its former prestige, which it had lost to varying degrees in societies around the world, including Brazil. “In times of health crises, like the one we’re living through with the new coronavirus, it’s natural for people to seek quick, solid answers from science,” he says. “Researchers are meeting this demand, either through research focused on developing a new vaccine or treatment strategy against the disease, or with clarifications and guidance on how to deal with the virus, through media interviews and on the internet.” This engagement is also reflected in the recent increase in the number of scientists who have become columnists at some of the country’s leading media outlets.

This demand from society, however, is not without side effects. In Iamarino’s view they are connected to a large extent to anxiety and insecurity associated with the lack of a safe, proven strategy against the new disease. “People have a basic urge to cling to anything that helps them reestablish a sense of control over their own lives. In a pandemic like this, these feelings pave the way for more urgent demands for quick answers from science, and for a desperate search for alternatives, which appear as possible solutions to the problem, such as protocols, rituals or ‘miracle cures’,” he observes. This behavior was evident in the excitement around the supposed potential of hydroxychloroquine, despite the lack of scientific studies proving its effectiveness in patients with COVID-19. Iamarino further suggests that this behavior is not exclusive to the larger public. “Even some scientists are clinging to quick formulas,” the science communicator adds.

Philosopher Marcos Nobre, a researcher and president of the Brazilian Center for Analysis and Planning (CEBRAP), sees the COVID-19 pandemic as an opportunity for scientists to show society how science works and why it is important for a nation’s development. “The worst thing that scientists can do now is to try to seek commitment from society based on the false promise that science will have a solution for the disease within a given timeframe,” he says.

Physicist Peter Schulz, from the School of Applied Sciences at the University of Campinas (UNICAMP) and the university’s executive secretary of communications, shares his concern. It’s important to him that scientists make it clear that science is not a cabinet supplied with ready results and magical products. On the contrary. “This is the moment to be transparent and reinforce the idea that science is a slow, complex process, based on specific methods, and its results need to be submitted to other scientists in the same field for validation—and that these aspects constitute some of its essential qualities.”

The novel coronavirus crisis also presents an opportunity for science to clearly show the public that scientific results are a direct consequence of the investment in research each country makes over decades. Nobre cites the case of sequencing the human genome, completed in 2003. “Societies, at the time, didn’t perceive the applications for the results of this research effort,” he explains. “However, thanks to investments made in this field about 30 years ago, and the creation of a wide collaboration network for this purpose, researchers today have the methods and tools that enable them to sequence the new coronavirus genome, and better understand its behavior, which could prove essential in developing a vaccine or a drug for the disease.”

Science, he says, has a history of achievements that legitimizes basic research as a source for new technologies and applications. “We need to take the opportunity to show how research, guided by researchers’ intellectual curiosity, can help prepare society for problems that don’t even exist yet.”

Nobre, who is also a professor of philosophy at UNICAMP, believes one of the factors that seems to have contributed to science partially recovering society’s trust involves the fact that the scientific discourse in recent months has dissociated itself from the political authorities. “Society can see with increasing clarity that the reality of the pandemic is very different, and much more serious, than the scenario painted by various political representatives,” the philosopher notes. “In Brazil, the actions and speeches of President Jair Bolsonaro went contrary to scientific recommendations and epidemiological models, and were pivotal in creating a rupture between science and political authorities,” he says.

The consequences of this rift can be seen in the adherence—by a significant percentage of the population—to the social-distancing strategy adopted globally to contain the transmission of the virus. “While the president is insisting on the idea of restoring economic activity around the country, a large portion of the population has remained at home and, when they do leave, do so wearing a mask. This means that people, including the overwhelming majority of governors, are more willing to rely on recommendations based on scientific evidence than on speeches by the head of state.”

The federal government also created a false dichotomy between implementing strategies to contain the spread of the new coronavirus and concerns regarding economic recovery, which has helped generate a new type of political polarization in Brazil. This has been a key factor in the recent increase of attacks and threats aimed at researchers, journalists, and science communicators on social networks when they advocated for adopting social-distancing measures and suspending activities stipulated by state and municipal governments, going against the federal discourse.

Another important aspect of the Edelman survey involves the proliferation of so-called “fake news” regarding the new coronavirus. In the study, 74% of respondents said they were concerned about the spread of false information related to SARS-CoV-2. At the same time, 45% said they had experienced difficulty identifying reliable data on this subject. The WHO had already expressed its concern and called attention to the massive spread of misinformation, lies, and rumors about the pandemic, characterizing the phenomenon as an “infodemic.”

Social networks are the primary tool used to spread fake news, and the anti-vaccination movement is one of the most active. In the United States, a study published in May in the journal Nature suggests that Facebook pages that spread anti-vaccination content tend to have few followers. However, such pages are more numerous than those supporting vaccination, and often have more links to discussions on other pages, such as those of parent associations at schools—whose positions on vaccination tends to vary. On the other hand, the pages that explain the benefits of and scientific principles behind vaccines are linked in networks that are disconnected from these and other actors involved in the discussion.

In a scenario in which the lack of a vaccine is precisely the fundamental problem, these groups are working to readjust their narrative, adapting it to the reality of the global coronavirus pandemic. Dayane Machado, a doctoral student in the Department of Science and Technology Policy at UNICAMP studies anti-vaccine movements on the internet. One of the strategies these groups use, she notes, is to associate COVID-19 with conspiracy theories involving countries like China, or with large pharmaceutical companies, who have supposedly manufactured the virus in order to subsequently profit from the vaccine. “There is also the narrative that the new coronavirus is a scam to try to convince people about the importance of vaccines for other diseases,” the researcher explains.

In many cases, these groups are engaged in planting doubts about the official discourse, claiming there exist hidden interests behind governmental guidelines, international health organizations, the results of studies published in scientific journals, and news articles published in the press. “Their goal is to distort reality and promote a feeling of distrust around the official information, and then to present what they claim to be ‘the real truth’ of the facts.” Some researchers studying this movement, however, warn that it may compromise SARS-Cov-2 immunization efforts if scientists are able to develop a vaccine in the coming years.

Another strategy used by these groups, according to Machado, is to leverage the credibility of real institutions to legitimize false information. “There are several cases of hoaxes based on invented studies, often attributed to nonexistent researchers working at respected institutions like Harvard University in the United States, for example,” he says. A recent study by researchers at the Sérgio Arouca National School of Public Health at the Oswaldo Cruz Foundation (FIOCRUZ) found a similar trend in Brazil. They analyzed complaints and fake news received by the Eu Fiscalizo [I-Monitor] app between March 17 and April 10. The researchers found that 71.4% of the fake messages spread on the WhatsApp messaging platform cite FIOCRUZ itself as the source of texts or studies about COVID-19. The United Nations Children’s Fund (UNICEF) and WHO account for another 2% of the institutions falsely cited as sources of information about cautions and preventive measures against SARS-CoV-2, in messages disseminated through WhatsApp.

Fake news regarding the pandemic also feeds alternative health channels on platforms like YouTube. According to Machado, many of these channels, which normally spread fake science articles about vaccines, are now invested in promoting alternative therapies and products that encourage people to “strengthen” their immune systems against the virus and protect themselves from the pandemic. “Politicians and celebrities are playing a central role in this cycle of disinformation on the internet by sharing these videos, which have now reached unimaginable numbers of people.”

As a result, various countries are investing in measures to try to contain the spread of fake news, especially items related to COVID-19. Combating scientific disinformation, however, depends on a broader effort, involving public authorities, scientists, journalists, and science communicators on the internet. “People have never been more willing to hear about and talk about science than under the current circumstances,” Iamarino observes. “This is the best time for researchers to invest in strategies for communicating with the public.” For Nobre, this communication needs to be open and transparent. “Only then will science be able to effectively restore its social legitimacy,” he concludes.