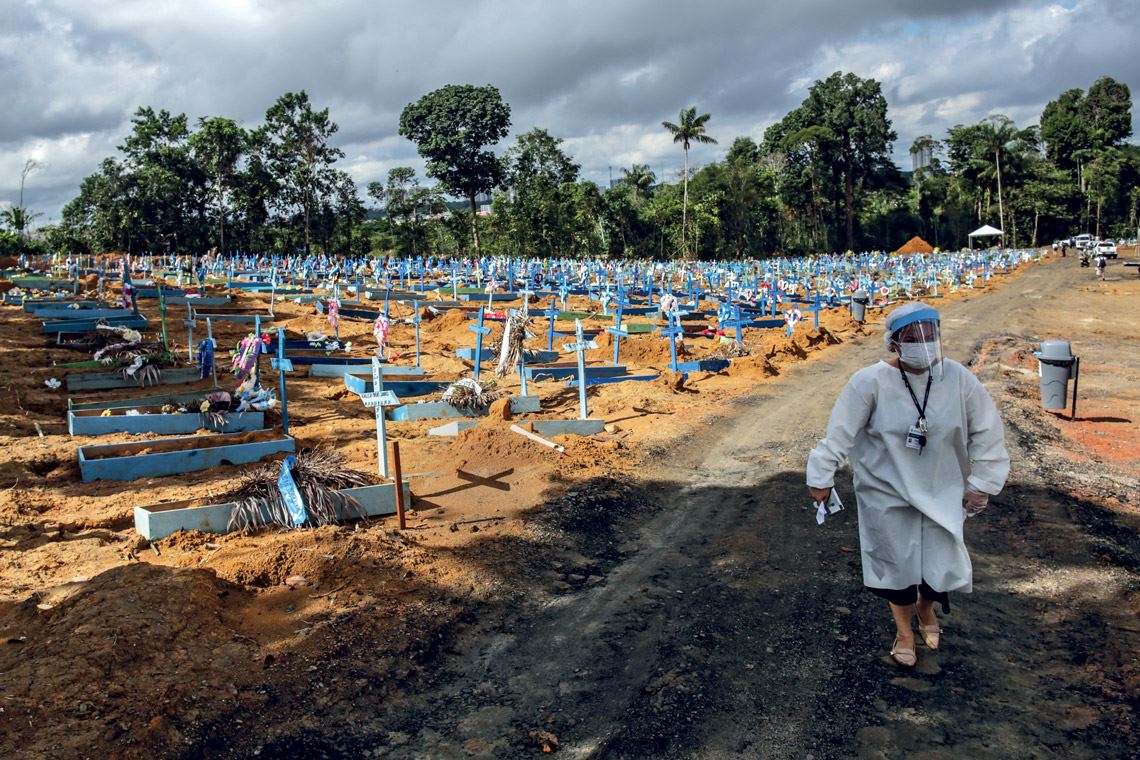 Parque Taruma Cemetery, in Manaus, May 19

At this point in the pandemic, the SARS-CoV-2 virus is notorious. Six months after the first cases of COVID-19 were recorded in Wuhan, the capital of Hubei province, China, we now know how the virus is transmitted and there is no doubt that it is the cause of the disease, which is most typically—but not uniquely—characterized by severe lung damage in critically ill patients. It is not yet known, however, whether the human body creates antibodies that grant immunity to the virus. Scientists worldwide are working night and day to develop vaccines and specific treatments for the disease. Since it is unlikely that any vaccine will be approved in less than 18 months, the only way to avoid contamination for now is through good hygiene practices, such as regularly washing hands, wearing protective masks in public, and social distancing. It is also known, based on the experiences of other countries, that any and all data related to the pandemic can make a difference in the fight against it. In this issue, Pesquisa FAPESP demonstrates that understanding the scale and dynamics of the disease has become a matter of life and death.

With COVID-19, the starting point for any inferences and mathematical modeling is the number of infected individuals. In Brazil, mass-testing programs were only adopted three months after the first case was reported and with a small scope, considering the continental size of the country (see article). As a consequence, the results of epidemiological studies are only now beginning to help experts understand how the virus is spreading in Brazil. The information gleaned from worldwide, large-scale testing has revealed itself as a powerful tool in the development of public health policies, allowing authorities to identify the infected and trace and isolate those with whom they have been in contact.

Read:
– Natural guests
– Brazil begins testing
– Predicting the course of epidemics
– Sergio Machado Rezende: Together against COVID-19
– Restoring trust
– Calculating in the dark
– The size of the pandemic
– The child enigma
– Research during the quarantine

The delay in testing en masse was followed by another problem: the time taken to determine test results. At the end of May, more than 2 million RT-PCR tests were waiting to be processed by the public system. Something similar has occurred with COVID-19 notification systems, which are based on the results of these tests, or in their absence, on information from clinical diagnoses of the disease. Records on the e-SUS Epidemiological Surveillance system (e-SUS VE) and the Influenza Epidemiological Surveillance Information System (SIVEP-Gripe) could be up to two months old. There is a gap between the severity of the condition as shown by the figures and the even more serious current situation being faced by health centers, field hospitals, and intensive care units (ICUs).

It is therefore not possible to say with certainty how the virus might spread in Brazil, nor how lethal it may be. Without the support of accurate data, it is almost impossible to define the most appropriate responses for each region of the country to lower what is known as the disease’s basic reproduction number—the rate at which people are infected. There is therefore no way to effectively predict when the pandemic will peak. In the absence of such information, it is also extremely difficult to optimally implement rules on social isolation and when schools and businesses should reopen.

The challenges of obtaining data have forced scientists to be creative in their efforts to predict the economic impact of the pandemic. The Brazilian Institute of Geography and Statistics (IBGE) postponed its census until next year and canceled the home visits it conducts as part of the Continuous National Household Sample Survey (Continuous PNAD), published monthly with figures for the previous quarter. In addition to the uncertainties inherent to the pandemic itself, such as its duration, researchers are focused on measuring how much work people are doing while isolating at home and how much money has been spent on medical equipment. Sociologist Ian Prates, for example, says he is using data that in normal situations, he would not use, including information on consumption and circulation collected with the support of institutions such as Google and Cielo, and on the situations faced by businesses, obtained with the help of the Brazilian Support Service for Micro and Small Businesses (SEBRAE).

The advance of the pandemic, which by the end of May had already claimed the lives of at least 32,602 people across the country, shows that obtaining data takes both time and effort. Saving one or dispensing with the other not only leads to ignorance of how many people are infected and where the main outbreaks of the disease are located, but it also makes analyses and projections less accurate. Fundamental to slowing the spread and indispensable to finding treatment, science needs data to inform public policy and change the current situation for the better.